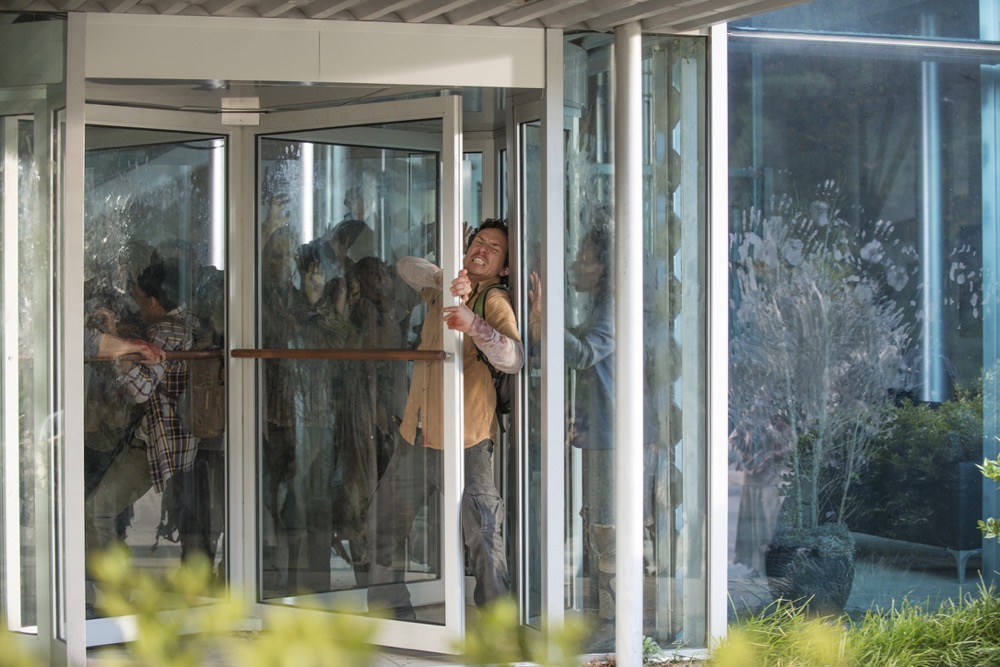 When I begin to write a post, I generally come up with a title that happens to be relevant to that day’s topic. Today I wanted to use a gif of an ever-revolving door;

-but then I came across that image of a bunch of zombies, which because I’m a 12 year old boy, I thought was considerably cooler.

So let’s get down to business.

First things first I would like to announce that I’m buggering off into the woods on Wednesday so for at least this week, today’s post will be all she wrote.

I’ll do my best at wringing out a humdinger so no one feels like they got less than they payed for.

Which is nothing, so basically, no matter what you’ll come out ahead.

Starting with matters of two wheels, I got a shout from an old frind of mine last week mentioning that he was going to be in San Francisco over the weekend doing some heavy lifting with an event that his company was promoting; 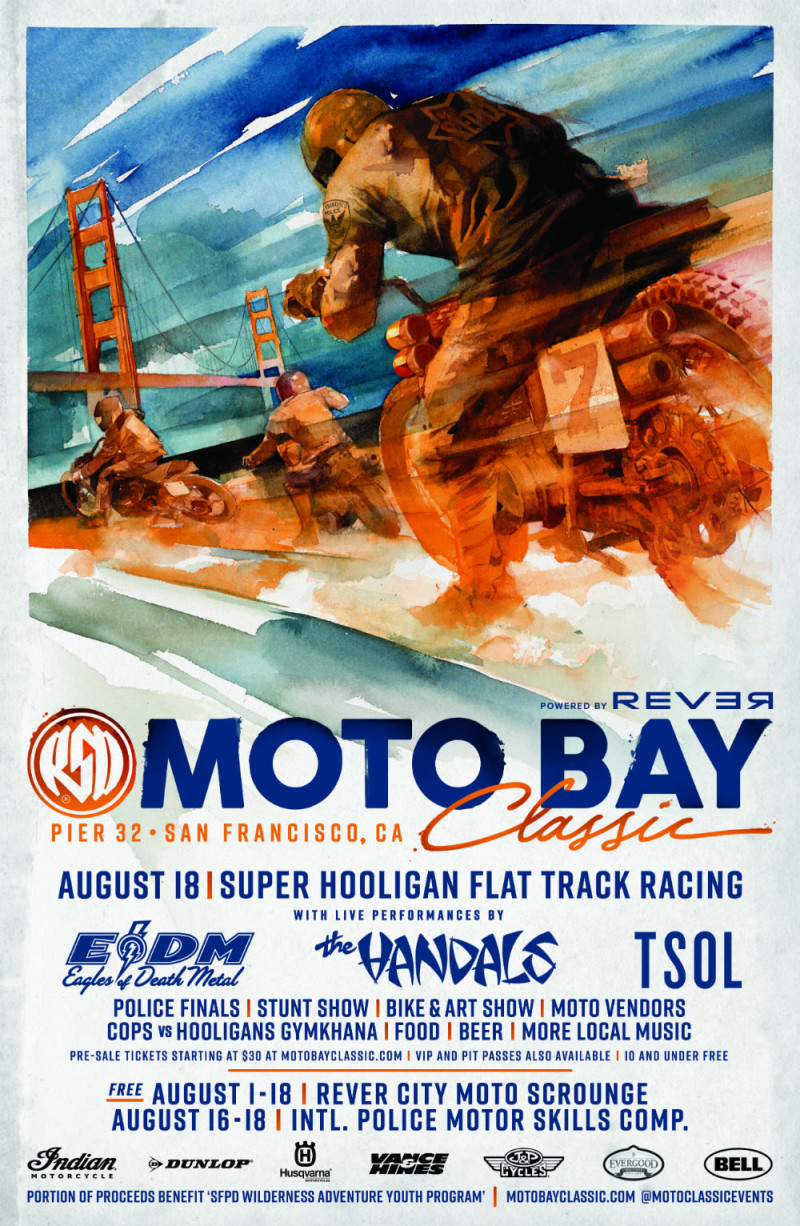 He then asked if I’d be interested in a couple of comped passes.

“Hell yeah I would” I believe was something along the lines of how I answered.

The Vandals AND TSOL?! It’s like ‘Suburbia’, but older, and fatter, and etc.;

Anyway, upon entering the venue, I lurked around and checked out some of the builds on display; 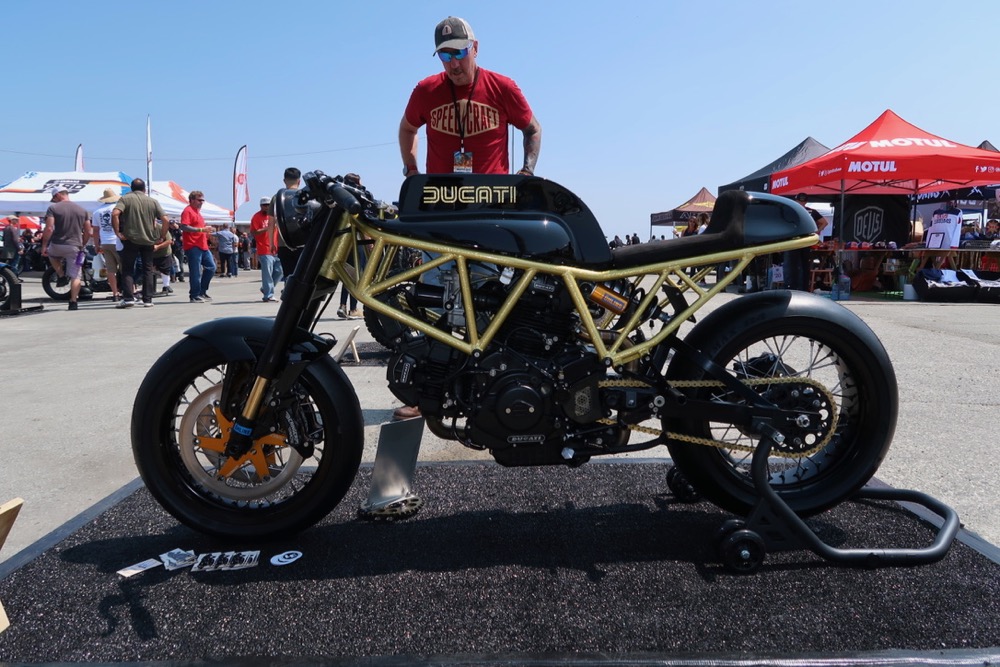 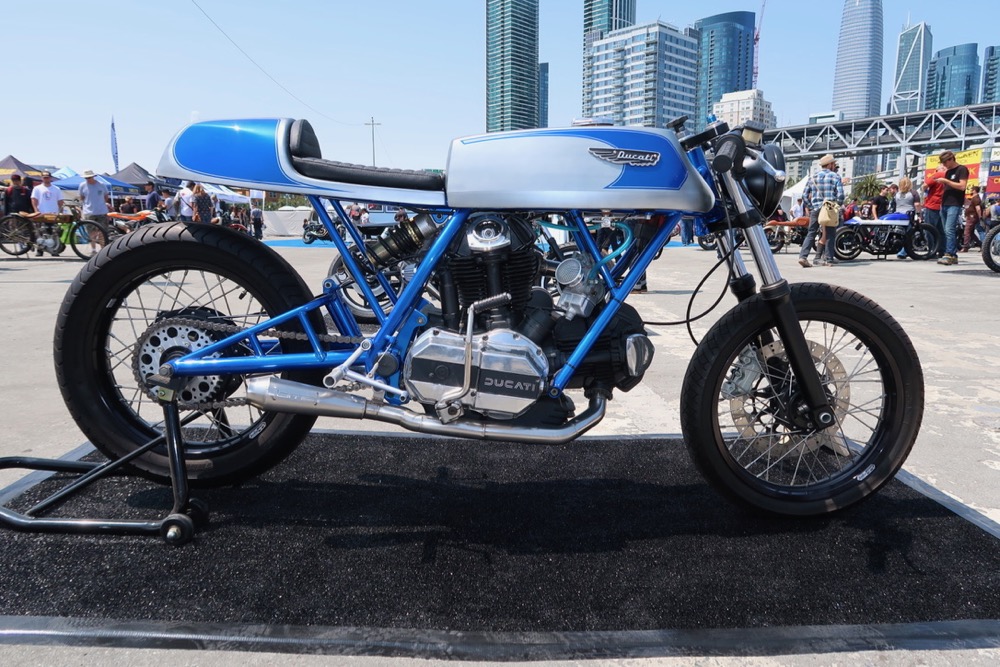 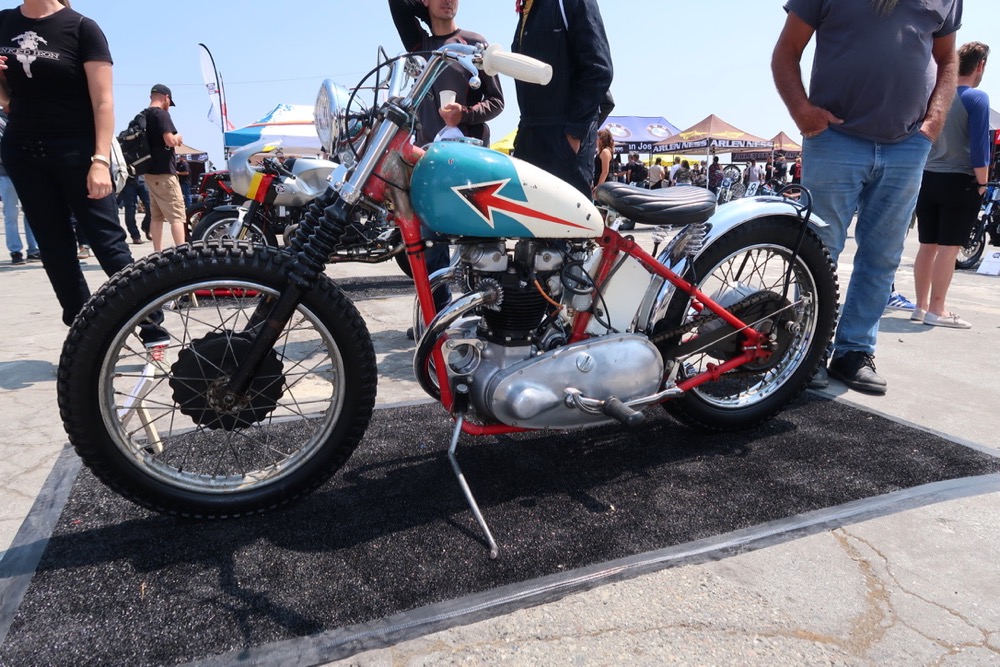 After drooling all over myself for that Triumph, I immediately turned around and smack dab into the aforementioned friend who got me into the place to begin with; Some fun facts about Blake… We went to high school together, though haven’t seen hide nor hair of one another since. If in the very early 80s, the bare foundation of punk rock was already laid in Colorado’s Front Range, then he assuredly was the dust on said foundation.

His was one of the first bands I ever saw live, and was perhaps one of the first punk kids in or around my hometown. In the years since, he’s made a handsome career for himself in the motorcycle industry, and like all of us here, has fallen well down the rabbit hole of mountain biking. So getting to walk around the venue and catch up was a real treat, and I appreciated his considerable efforts in both helping to plan the event, as well as allowing me to take part in it.

Eventually, I met up with another pal, and it was time to head East in order to catch a birthday party for Javier of Paragon Machine Works; 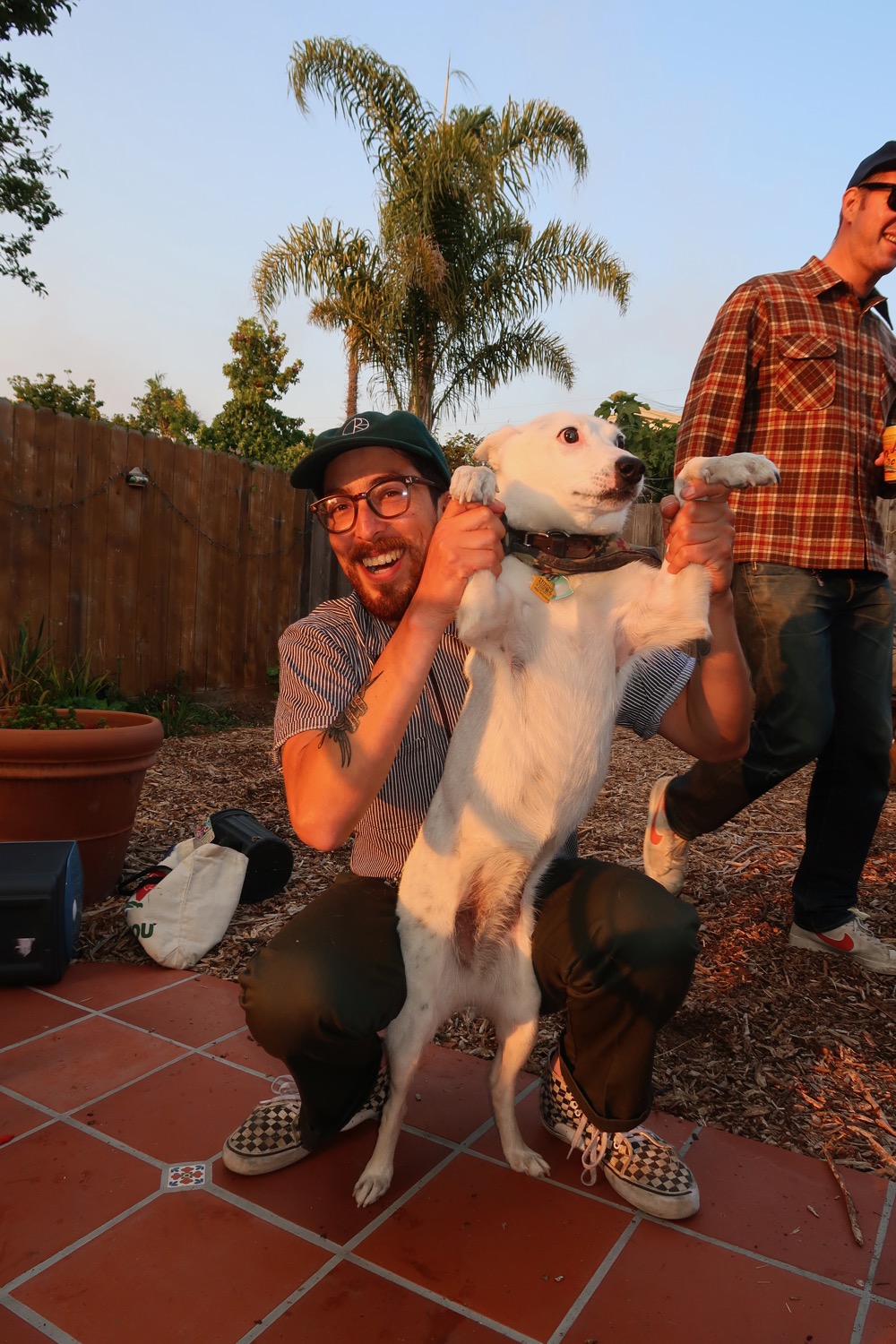 While there were a number of smart machinist types in attendance, I naturally rolled to the corner with all of the other marbles where we proceeded to drink our faces off and tell dirty jokes; So to Javier, I’d like to wish a happy 21st birthday again, and apologize for upperdeckering his toilets.

Lastly, I would like to show off a thing unrelated to either birthdays or motorbikes which has been at last several years in the making.

You see, twelve years ago, Dylan made me a wallet, which at this point is more air and duct tape than actual wallet; 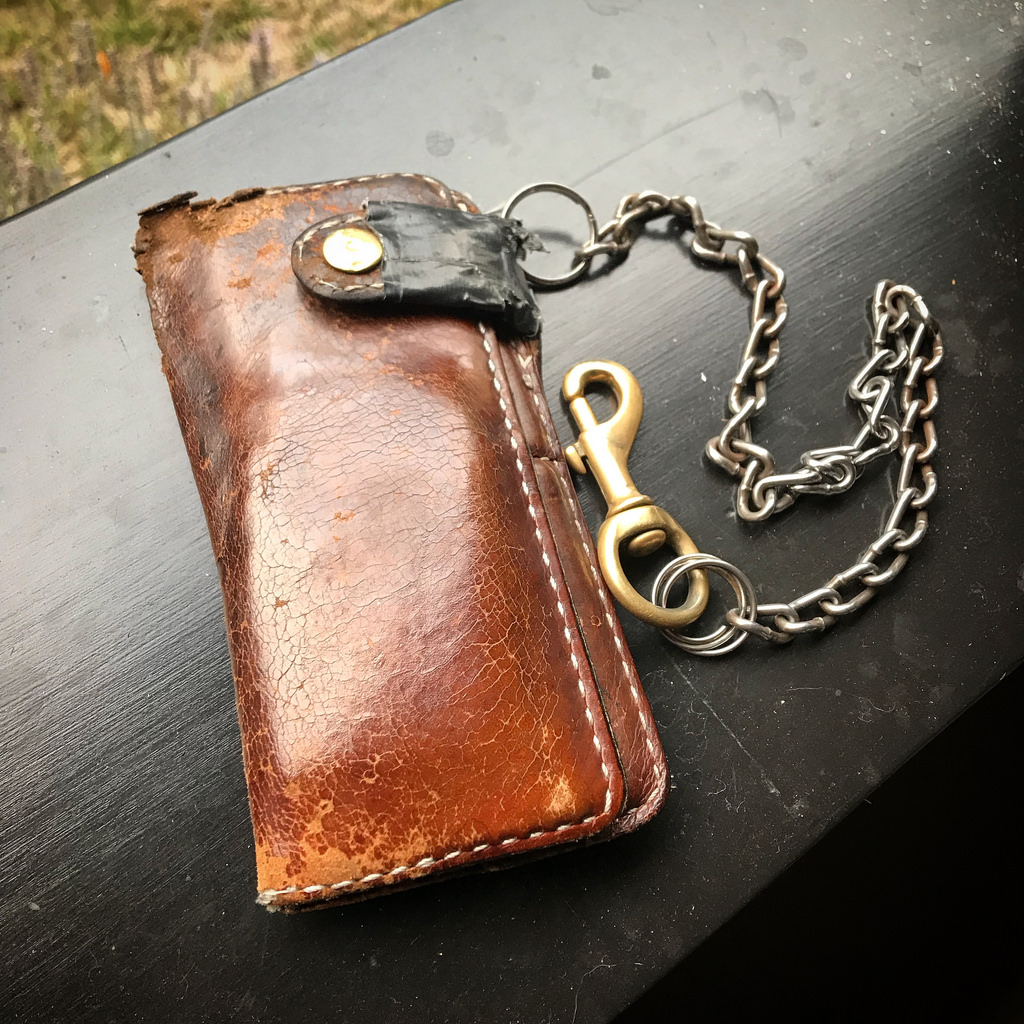 After reconnecting with Dylan three years ago through a mutual friend neither of us knew we had, I began hassling him to make me a new one. Finally, he said that his machines were all packed up and that he probably couldn’t. At that point I asked if he could share the contact information for a fellow named Rick who had initially taught Dylan the finer points of leather crafting. He did, so I then reached out to Rick, who like Dylan said his machines were packed up, but said I should contact their friend Greg who was at the helm of a company called Winter Co.

I reached out to Greg and immediately placed an order for some goods, though a few weeks later made with the contact again and asked what would be involved with tooling up a wallet that had the AHTBM Stuntman Association graphic on it. He said he could, and then weeks went by with no word, until just a couple of nights ago when what should I peep on the Instant Grahams but this; 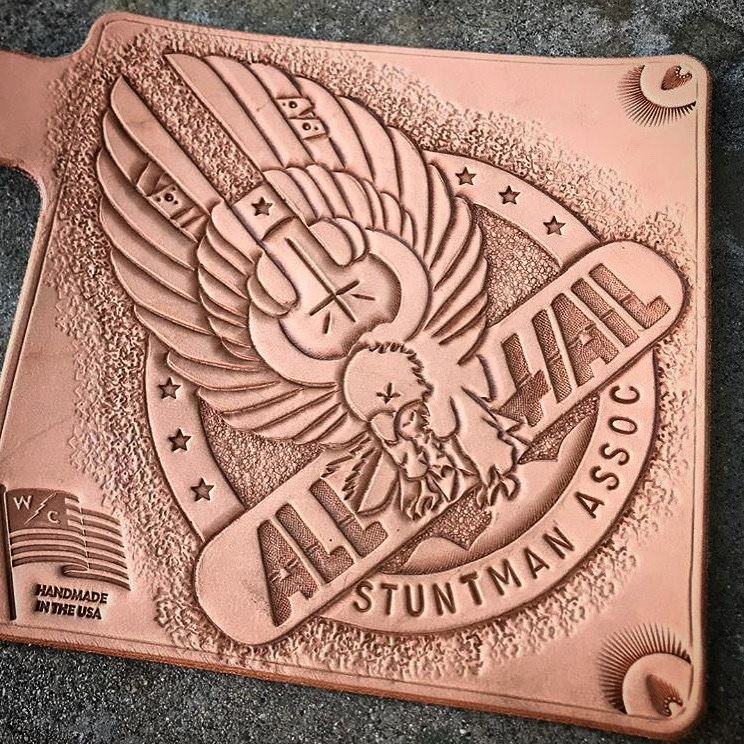 I crapped my pants so hard I disintegrated what was left of them, as well as the remaining scrap of my previously existing wallet.

If you might perhaps have a need or desire for some beautifully hand crafted leather goods, give Greg a holler and see what’s what.

I can promise you he won’t give you the run around, but even if he did, it would be less dangerous than a revolving door.

2 Responses to “Coming in and going out.”