But not quite not, either.

So here we are with the week’s second post and for those of you in California, and specifically, the Bay Area (because that’s where I am, and currently, all I know first hand), can I get a resounding ‘OH MY GOD, THIS TOXIC WASTELAND IS SUCKING MY WILL TO LIVE‘?

Between watching an entire town wiped off the map, not having seen the sun in days, the fact that breathing is literally killing anyone who does it, and the daily feed of calamity from DC, I’m finding it really, really difficult to hold onto my happy place.

Then, just as I thought I was really about to lose my marbles, I come across the news piece saying that Pabst and all of its subsidiaries might soon be gone forever; 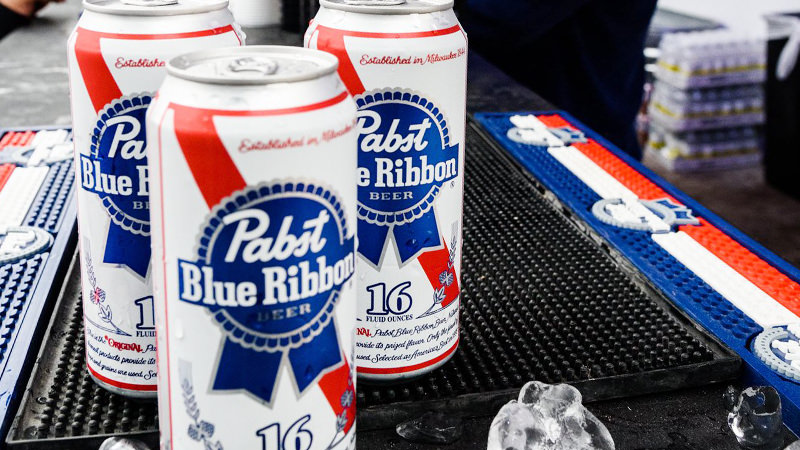 This of course includes Lone Star, Olympia, Rainier among others.

Naturally, this is troubling to me for a host of reasons.

I chatted with a guy I have on the inside and he said to establish the infrastructure they need to make the goods themselves, and to also distribute it, they’re looking at needing to round up about 400 million bucks. Between me, the entirety of this site’s readership, as well as their loved ones, I think we could probably get about $15,000 squirreled away, which puts us nearly almost practically all the way there.

The lawsuit, while not necessarily a slam dunk, at least looks favorable to Pabst, but besides me probably not wanting to get out of bed in the morning, I never say anything is a for sure deal until I see it with my own eyes.

I asked if I should stock up on Olympia now, and my guy said this case will take at least a couple of months. Which I take to mean that I should.

Rest assured, as we here in this virtual village of the damned are almost entirely comprised of fans of the swill, I will post any and all details on the matter as they cross my radar.

Where do we go from here besides lay down on the floor to weep?

I suppose I can hit pause on that activity for a moment and I can offer a few rays of hope.

Firstly I have two offerings. One being a video I’ve posted here before by a musical project called ‘Young Flood’ that’s fronted by my friend Joseph ‘Lady Sinatra‘ Holiday, and fits nicely into my earhole;

Then I got a message from Bencott about a buddy of his who is currently having himself a fine adventure;

Hey Stevil!
I hope all is well with you and yours. I just thought I’d share an edit from my friend. He’s based in Orlando, but living his dream of hitting the sick spots in all 50 states. Check the link if you like;

Though this correspondence does my heart right, unlike the Young Flood clip, this makes my spine kinda ache.

In closing I’ll present a small follow up to this post, specifically the part about the current Ralph Steadman show at the Haight Street Art Center. Which, but the way, if you live in or near the Bay Area you should visit.

So on Monday I decided to treat myself to a little bit of culture. I hadn’t yet seen the remodeled SFMOMA, so my plan was to hit that, and then to head up to see the Steadman show again, as it was so crazy packed on the night of the opening I couldn’t take it all in.

As I was standing in line for the museum, I took note of the $25.00 entry fee. Creeping ever closer to the front of the line I thought about how many burritos I could buy with $25.00, and how almost without exception, I rarely care for anything displayed there. Once at the counter I did a little Jedi mind trick and actually gain entry for zero dollars and zero cents.

Running up the stairs three at a time, I figured I should make myself scarce lest anyone realize my scam.

Sure as could be, (unless you’re into Duchamp toilets, and Anselm Kiefer’s giant garbage squares, or Elsworth Kelly’s mind numbing shapes) the exhibitions were supremely boring, but it was nice to see a number of pieces from the Don and Doris Fisher collection that I actually had previously installed during my former life as an art handler.

After about an hour and a half there, I skedaddled up the Art Center, but was dismayed to find that it was closed.

Standing outside panting into my respirator, I was plotting my next move when the doors opened and out came a couple fellas about my age. They both turned to me and I said dejectedly I didn’t realize y’all were closed that day. “Yeah, did you come here just for the show?” one of them asked. I told them I’d been at the opening but was unable to see much of the work very well because of the crowd, so I decided to take the day to come over and see it again, not realizing the gallery was shut. Just then one of the guys blurted out that he recognized me from the Art Crank Poster he’d actually printed for me several years ago. We all stood outside shooting the breeze, when suddenly they invited me in and gave me the supreme honor of a private viewing; 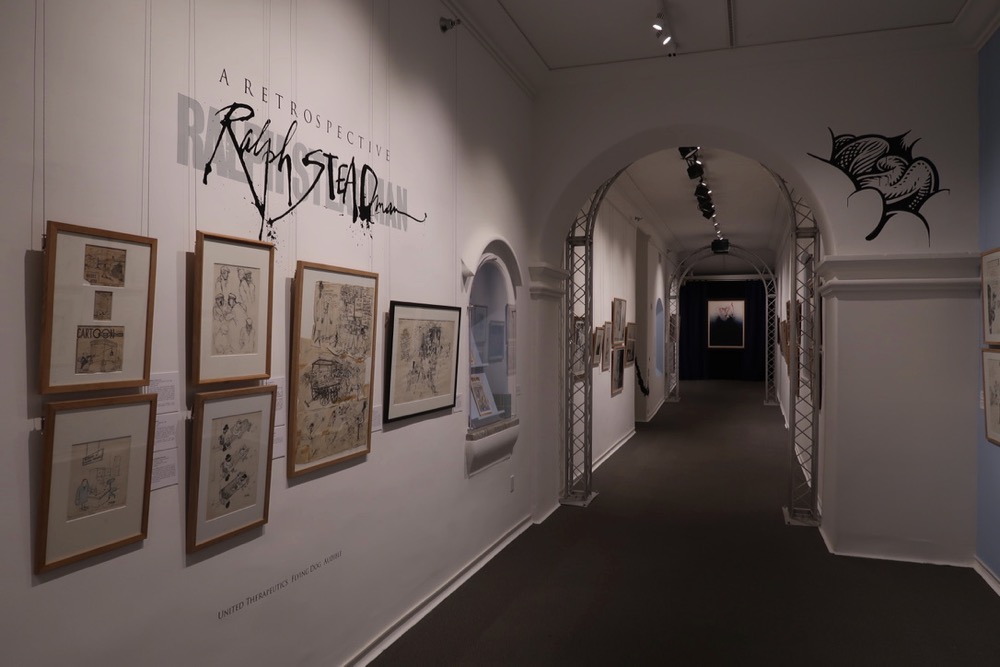 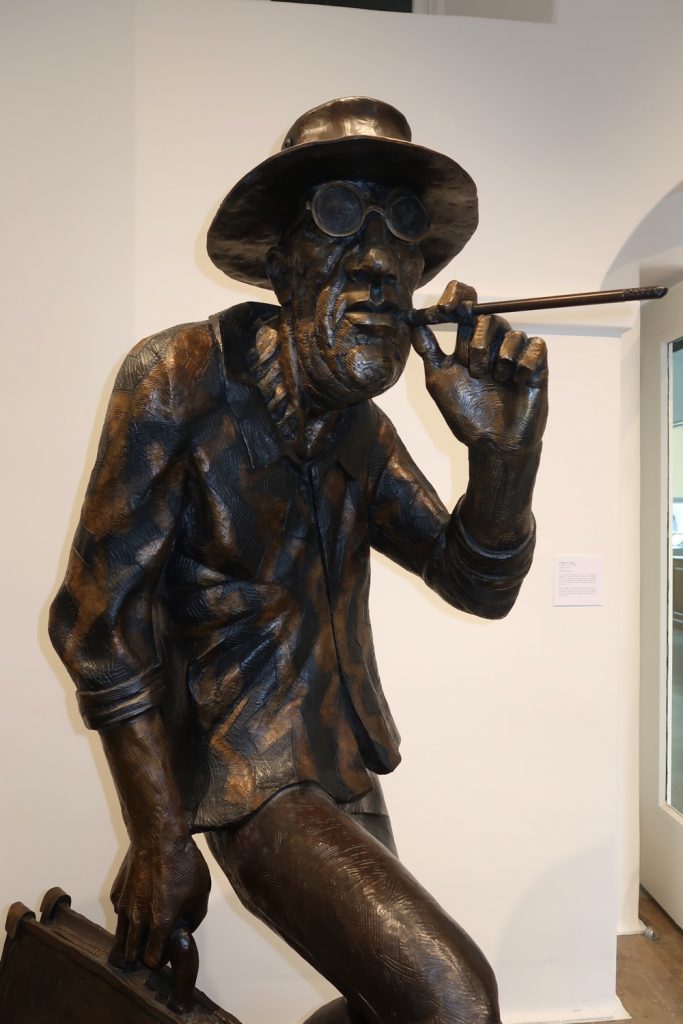 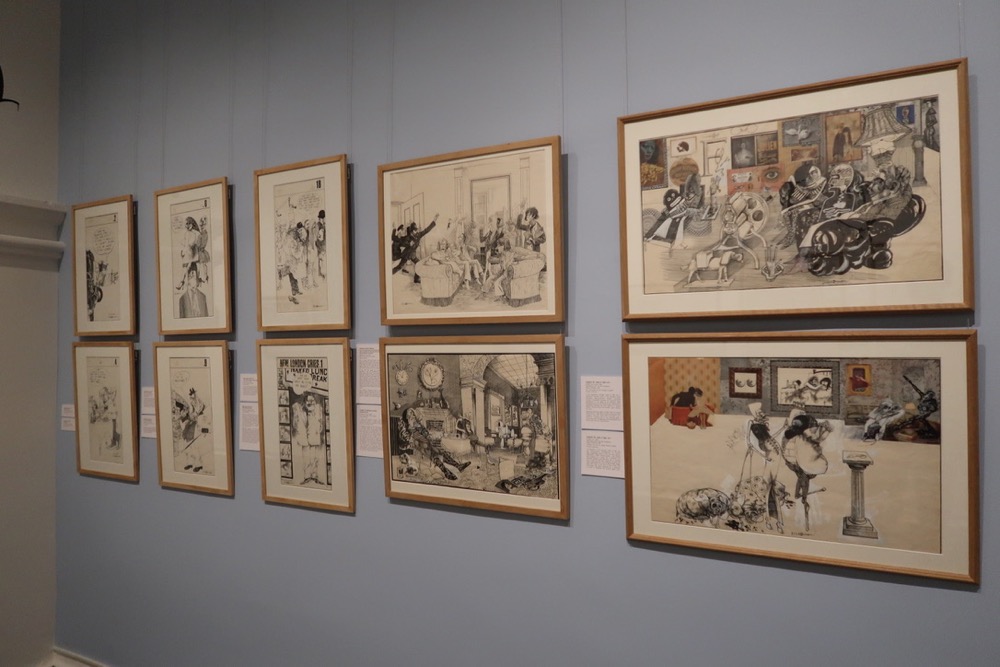 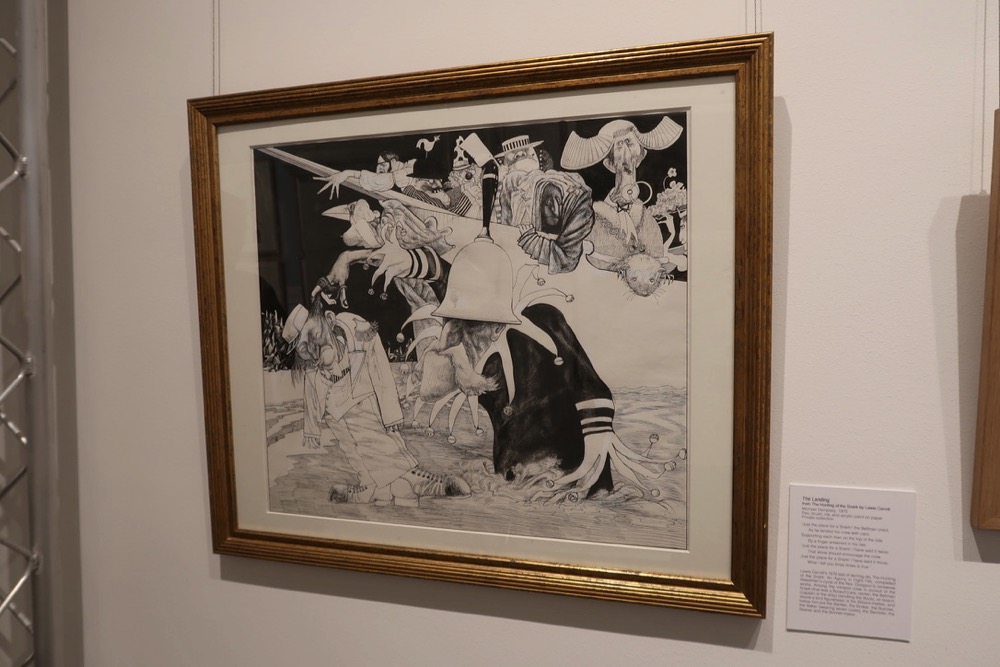 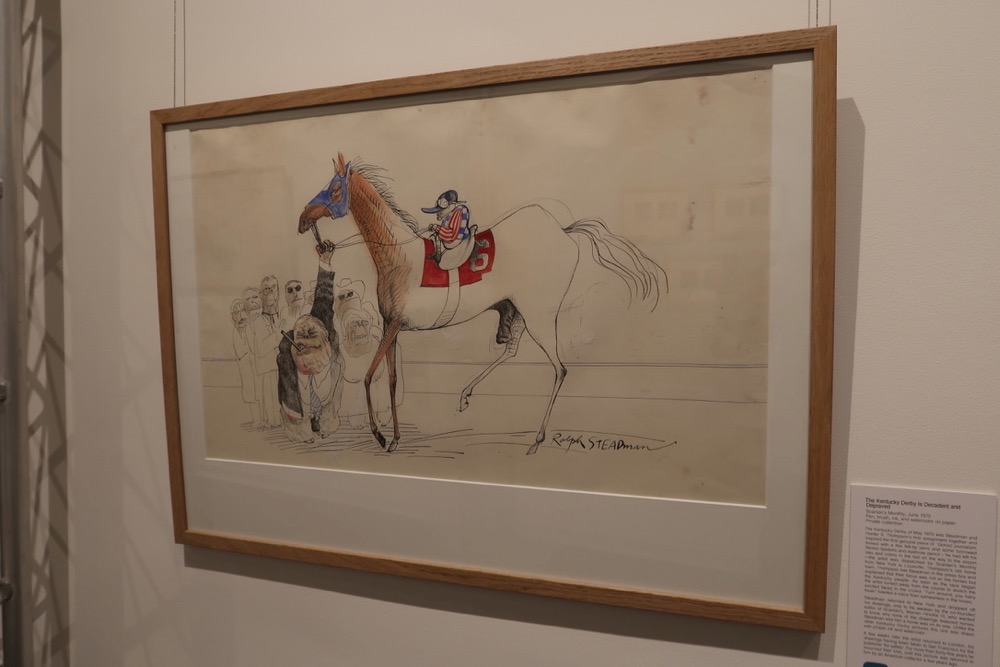 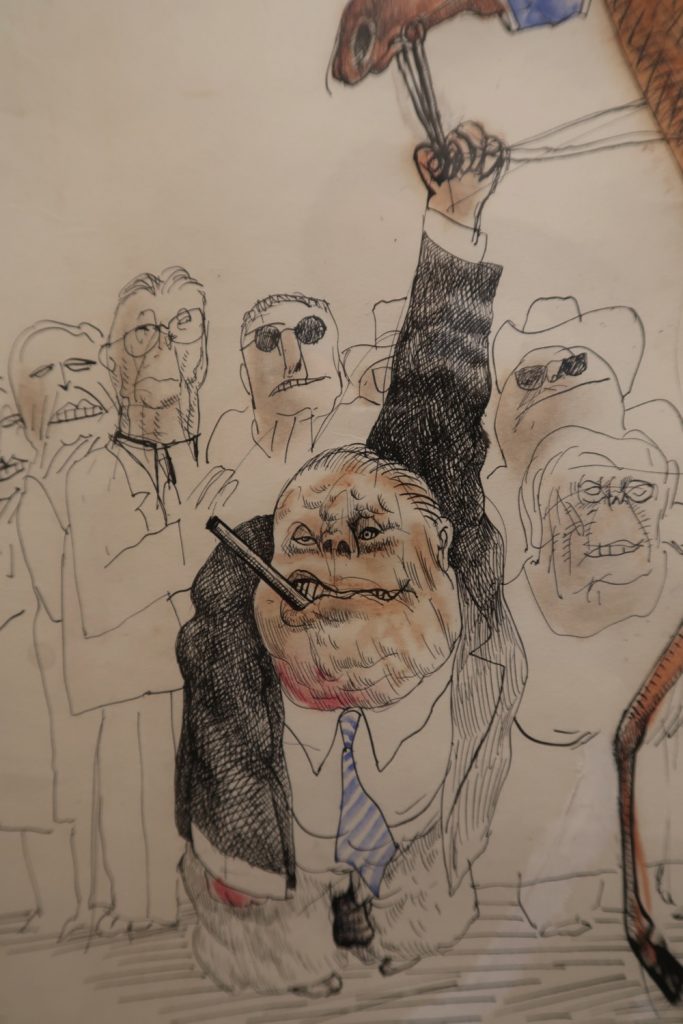 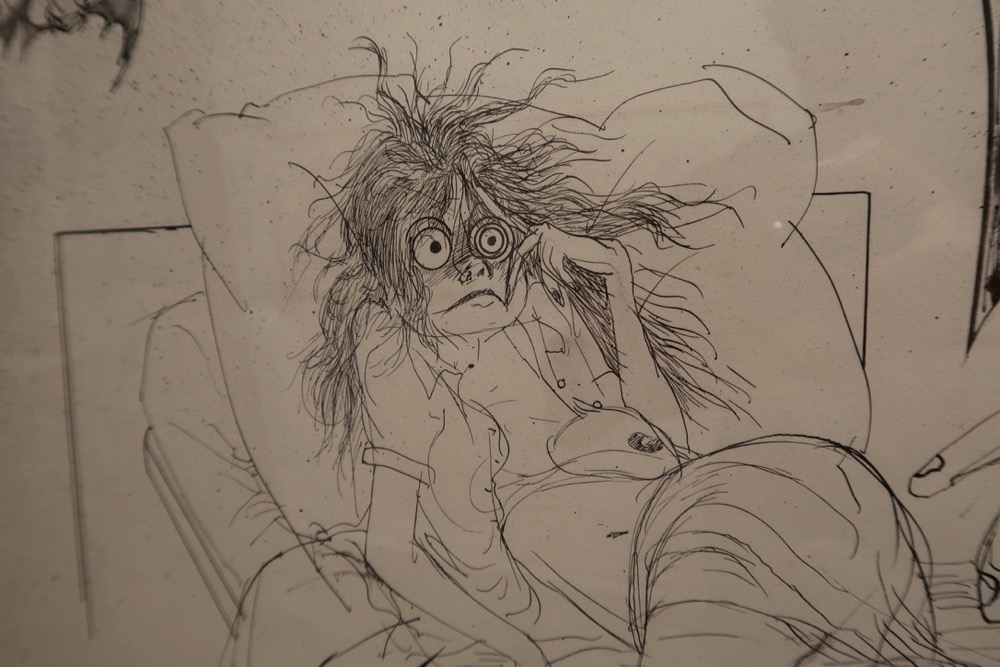 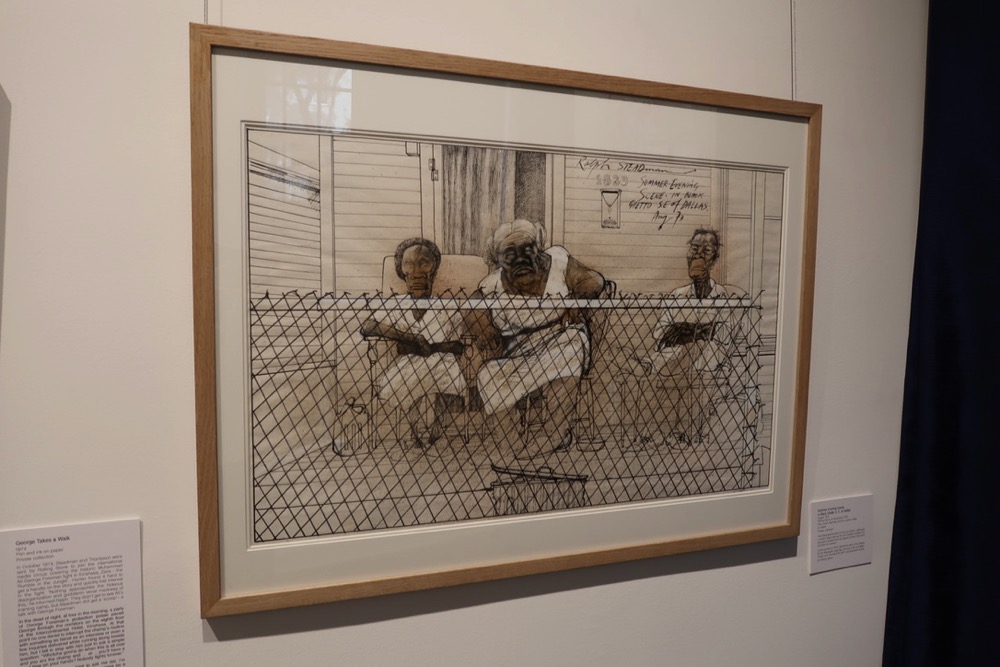 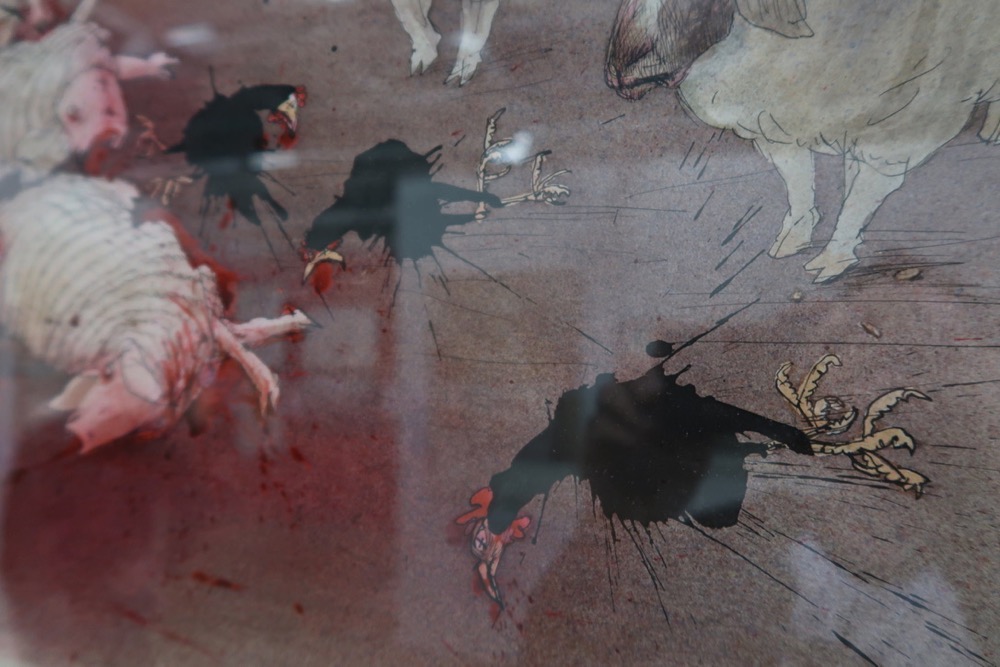 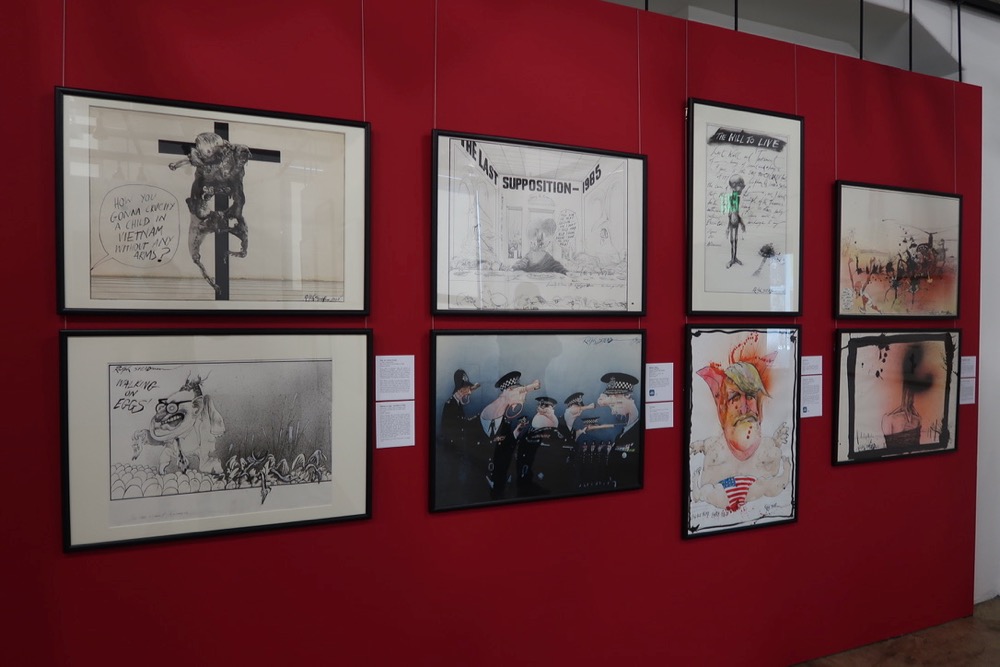 Oh, but friends do I tell you what- It is just a glorious thing to see these drawings in the flesh, and I encourage folks to make time before January 20th to take in the sights. To get to share space with work I’ve seen in print for so may years leave me feeling a close sensation of being star stuck.

After the show pulls up its Bay Area stakes, it’s headed to Eugene, Kansas City, Louisville, and Trenton before getting packed up and heading back to the UK. Please for all that is right, if you can, do what you gotta to take a gander at these works.

Though it’s not for everyone, personally, I find that in the try-ingest of times, immersing myself in artwork that I adore makes everything even incrementally easier to face.

It’s with all that I am, and all that I hold dear, that I stand by being that particular broken record.

5 Responses to “Not quite a broken record.”