Hello, and welcome back to another installment of the AHTBM web project. Shortly after we last met, I succumbed to an onslaught of such intense chronic migraines, I found myself wishing the aneurism would just come and get it over with.

Headaches have never been a thing I’ve been saddled with. Astonishing good looks, and a bottomless reserve of talent, yes, but headaches of any sort, no. I’m hydrated, eating and sleeping well, and mostly off the booze, so stymied, I looked to the internet. The two things I found there is A) I have brain cancer, or B) headaches such as this oftentimes come in the wake of overwhelming stress. I hear allergies to local pollen might have some hand in the issue as well, but that stress theory really checked some boxes. The move by itself was a whopper, but the last few months leading up to it was easily one of the hardest spans of my existence. I like not to reflect on myself in a pile on the floor, so wracked with anxiety and heartache that I was wailing uncontrollably, but if I avoided said reflection, I wouldn’t be honest, and if I wasn’t being honest, I wouldn’t be me.

So yeah, I guess it’s the stress’s last little one-two punch. “Thanks for playing along these last dozens of weeks. I couldn’t give you ulcers, or shingles, or make your hair fall out, so here is a parting gift of such blinding pain in your skull you’ll barely be able to get out of bed to feed yourself.” And just for the sake of making light of the plight, when I did finally get out of bed, I dropped my laptop on the ground, winning me a $2,400 trip to the computer store.

That’s not to say my first ten days in my new everything was a bummer, mind you. So far in my time here I’ve been able to get out on some nice spins; 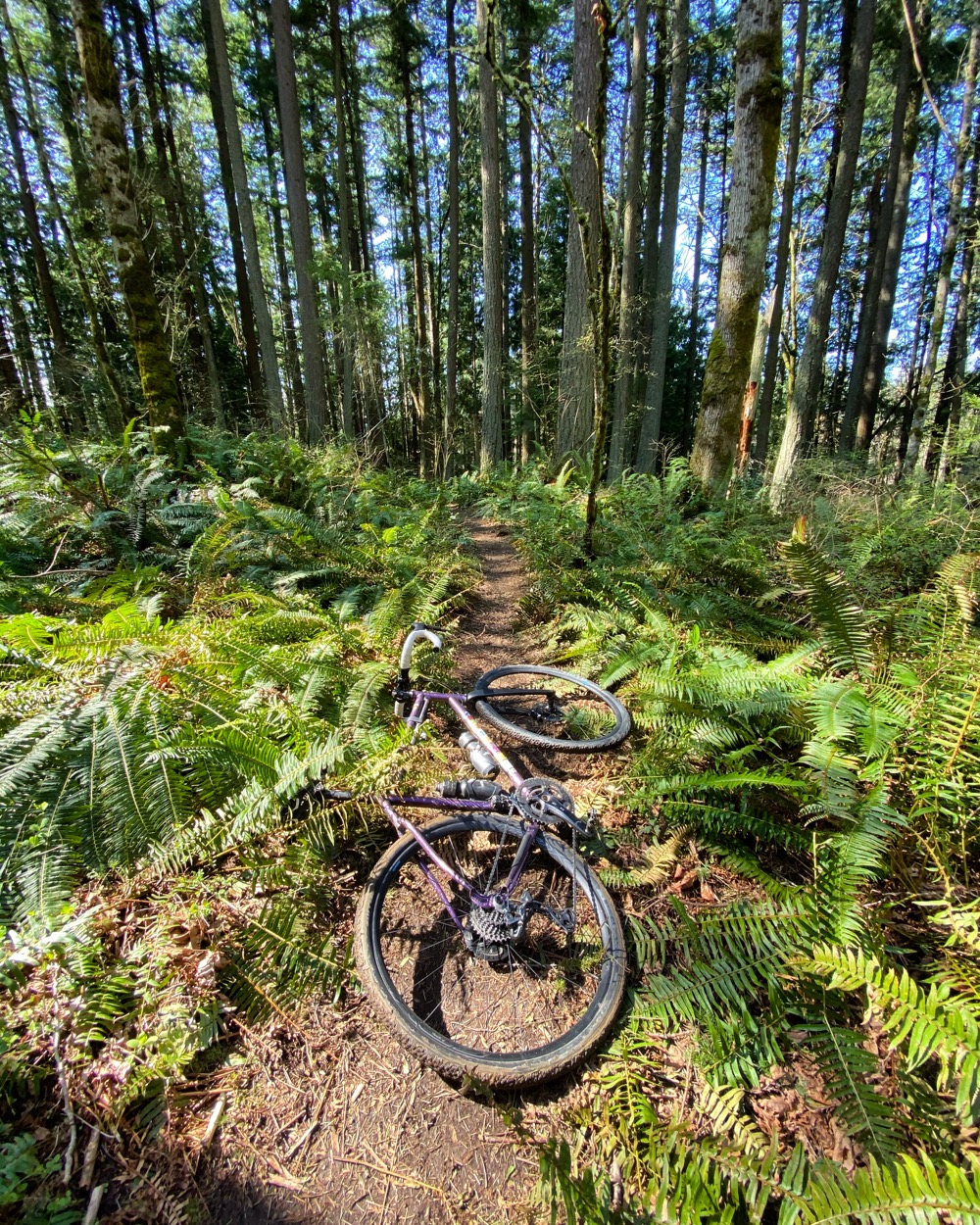 I also rode out and visited with Matt and Amy at Fairhaven Bicycles which just might have the nicest view of any bicycle shop in the world. (No photo provided, but you’ll just have to trust me).

Funny enough though, I ran into them in the woods just day before yesterday as I made my way across the mountain in celebration of a day both clear of skies, as well as skull-storms; Though I wasn’t quite on time to make it for the starting shot, I headed out across the woodlands to meet up with new and old friends at an outlaw endurance race thrown by my old buddy Hoff; While those kids rode their bikes in big circles, punctuated by snacks, and beers, I got a shot of some of us standing in a smaller one; 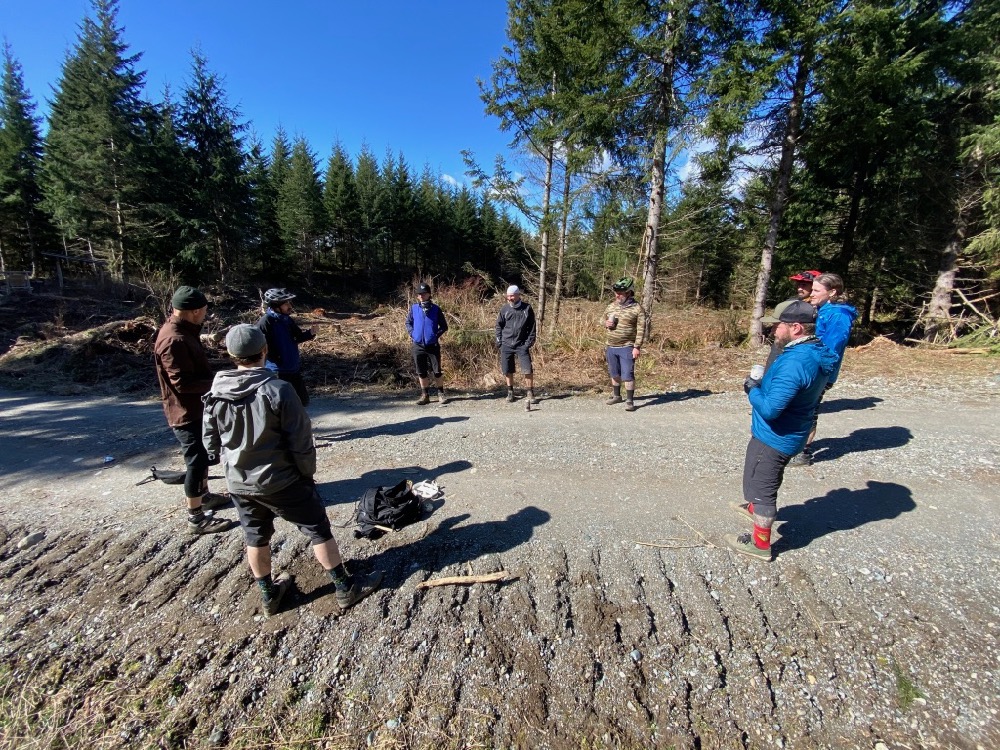 And then one of a few stragglers making the most of the late day sun; It felt good to check my worries at the door and laugh deeply for a little while.

(Space)Lord knows it’s been a minute.

Anyway, I’ve also ridden to my parent’s house for a few evening’s visits, and in doing so, rode over exactly zero broken bottles/nails/bags of dead animals/piles of abandoned construction debris/etc., nor at any time was I jacked for my bike; 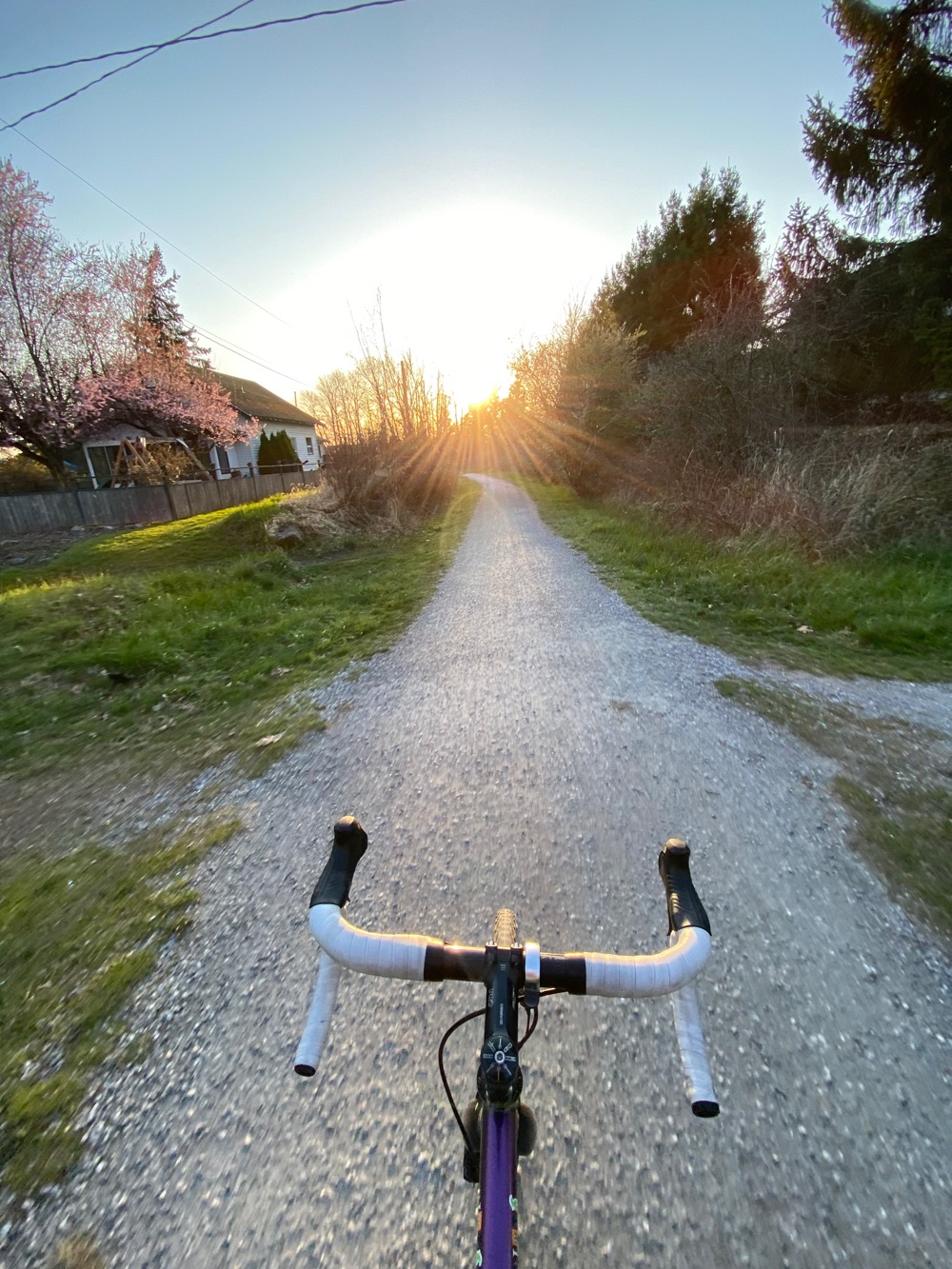 I almost feel adrift in all of this foreign-ness.

Between bouts of nauseatingly intense skull pain, and besides getting outside here and there to test the proverbial waters, it was with the encouragement of a few anonymitos out in the wilds of the internet, I’ve also have placed an order for a brand new round of AHTBM head caps; 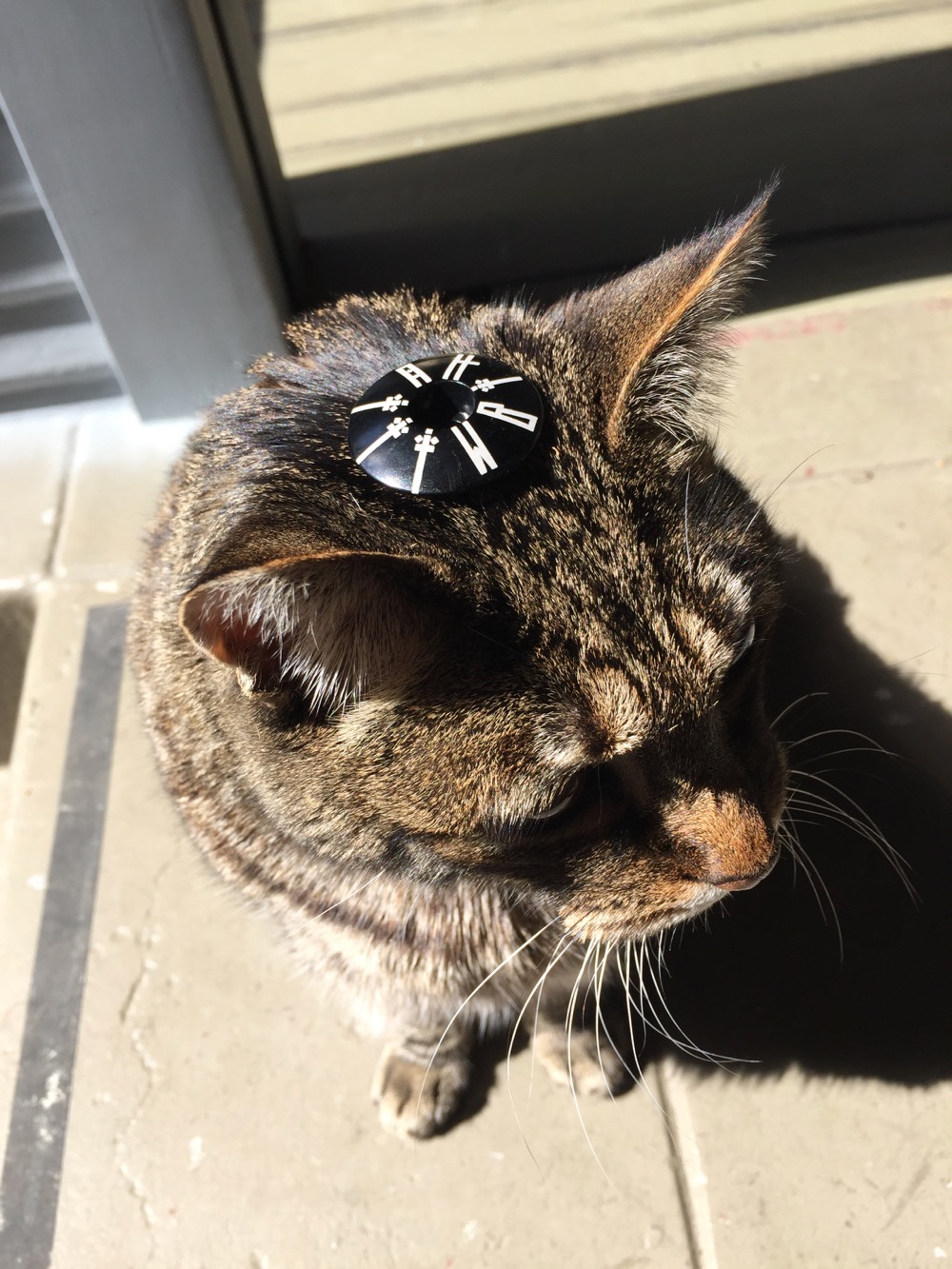 This photo of course was taken of my beloved partner in crime back when he was still alive and making the world a better place, but so glamorous is the shot, I feel compelled to use it again.

Anyway, those will be landing real soon, if you have an itch for one or two.

Oh, and in the meantime, I found a stack of old Swobo ‘Goat Dog’ patches (designed by one Chris Wright, natch); 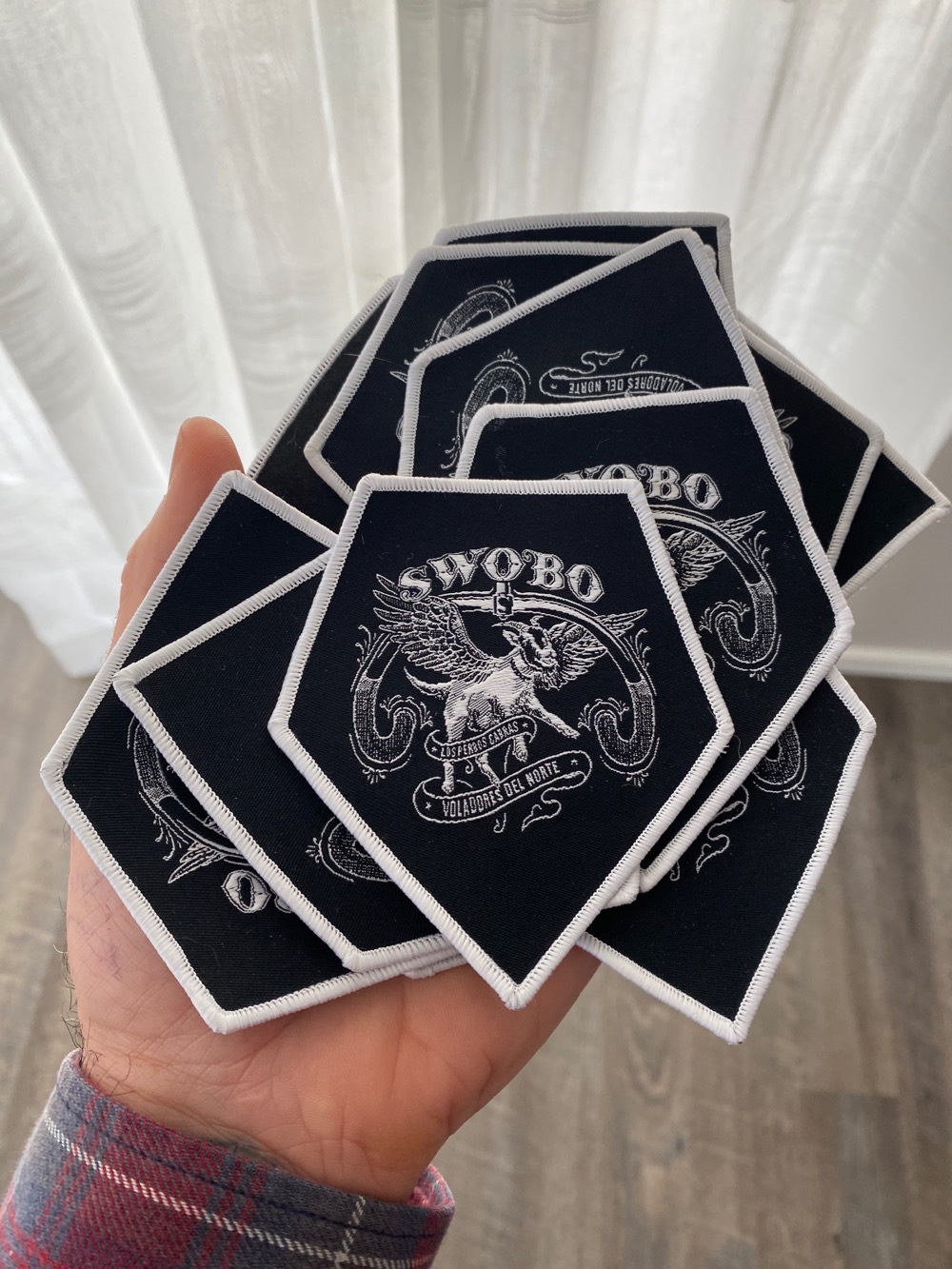 While supplies last, I’m happy to stick one in outgoing orders. If that appeals to you, do your worst.

Do any of y’all remember when I first debuted the video for Red Fang’s smash hit ‘Prehistoric Dog‘? So much traffic came from this site in those first few days, the guys in the band actually messaged me and asked if we knew one another.

Being that that was a high point for anything I’ve ever been involved with past, present, or future, there’s really nowhere to go but down, but the fact that the noise boys are back with another feast for he eyes and ears shouldn’t be overlooked;

Besides all that jazz, and to conclude today’s effort with art that doesn’t suck, I’ve been reading a book that my friend Jenny recently sent to me by an artist named Paul Madonna; 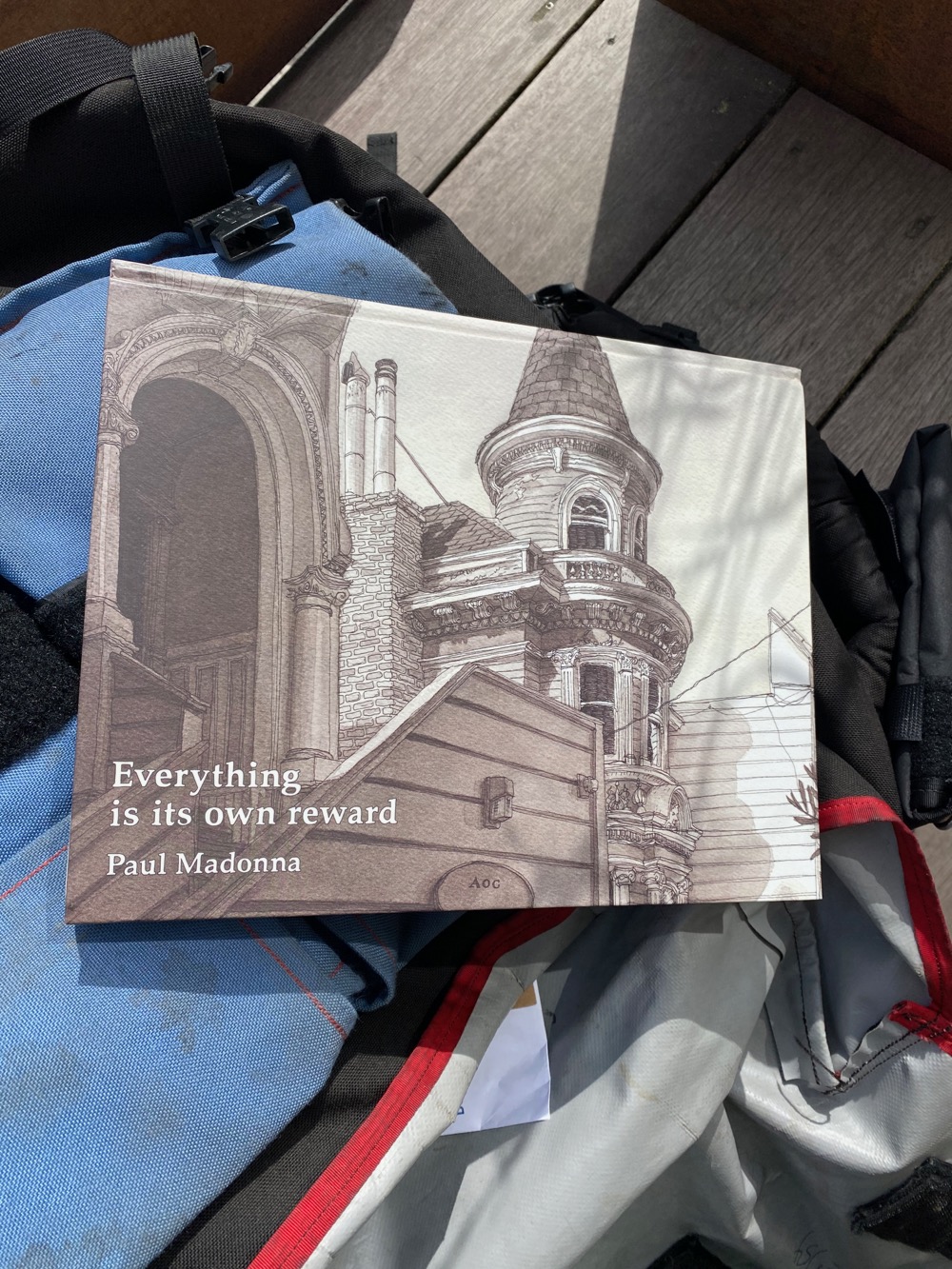 Are you familiar? I don’t know how I wasn’t, but I wasn’t, and now I am, and my world’s better for it.

If you’re a fan of Chris McNally, Chris Ware, (specifically his Acme Novelty Date Books), or even Dan Price, then Paul Madonna’s work is absolutely a thing that you will appreciate; It’s compelled me to start a brand new sketchbook in which I will only be doing observational drawings; We’ll check back on this process in a year and see how it’s developing.(Shrug/eyeroll emoji.)

As the adage that I just made up goes- ‘Every journey starts with a step, as does every fall down the stairs’.

The common thing that carries us to their conclusion of course being momentum.

6 Responses to “Momentum is momentum.”