For obvious reasons (obvious to those who’ve spent regular time here over the last year, but maybe not so much for those who haven’t), I’ve pontificated to some degree about what creates happiness… Or really, what chemical reaction occurs to make any of us happy. While watching a football game might check all those boxes, and let the serotonin fly for some people, it doesn’t do that at all for someone else. Those of us here are tucked into a distant corner where immersion in shenanigans, wheeled things, food that’s probably not very good for us, laughing, music, creative pursuits, solitude, and if we’re lucky, the occasional personal breakthrough are all vehicles for joy. It seems simple enough, but on those days when nothing sounds better in the world than just vanishing into thin air, there aren’t enough positive affirmations/mantras/meditative practices in the world to keep the ship off the rocks.

I’ve recently been in touch with a person who has found himself in a similar situation to my own. What he thought was going to be his forever wasn’t, and finding a way to put his remaining pieces back together appears to be an almost insurmountable task.

What do we do when the storms get too turbulent, and the inner critics’ voices become deafening? The only thing I’m sure of is that it’s impossible to navigate on your own. As my own personal guide has instructed me- “find two or three people and make them your team”. Prepare to come absolutely unglued in their presence, and learn to be ok with that, and trust that they are individuals who will hold you in this process.

The term for this is ‘sacred reciprocity‘, and is defined as ‘the balance of giving and receiving’.

I suspect another quality possessed by folks who spend time on this site is an almost paralyzing empathy. You’ll give and give and rarely ask for anything in return. While it’s an admirable quality, it doesn’t wholly serve you, and ultimately has the potential to make a person sick. I know this first hand through my own experiences, though on a much greater scale, having watched friends, and guides become terminally ill. Carrying the weight of the world is too much for any single person, and is an unreasonable ask for anyone, and most definitely ourselves.

I bring this up today not so much from the perspective of someone who is an authority, or who has it figured out, but as someone who currently needs desperately to hear it.

By making this declaration into the vacuum of the internet, and it serves as a positive reminder to even a single person besides myself, then if even only temporarily, I’ll consider today’s effort a win.

In news of trying to live well, and following Susan B. Anthony’s directive to do one thing every day that scares you, I’ll once again present an image that my friend Scott shot of me a couple of summers ago, that I just recently received a proper print of; 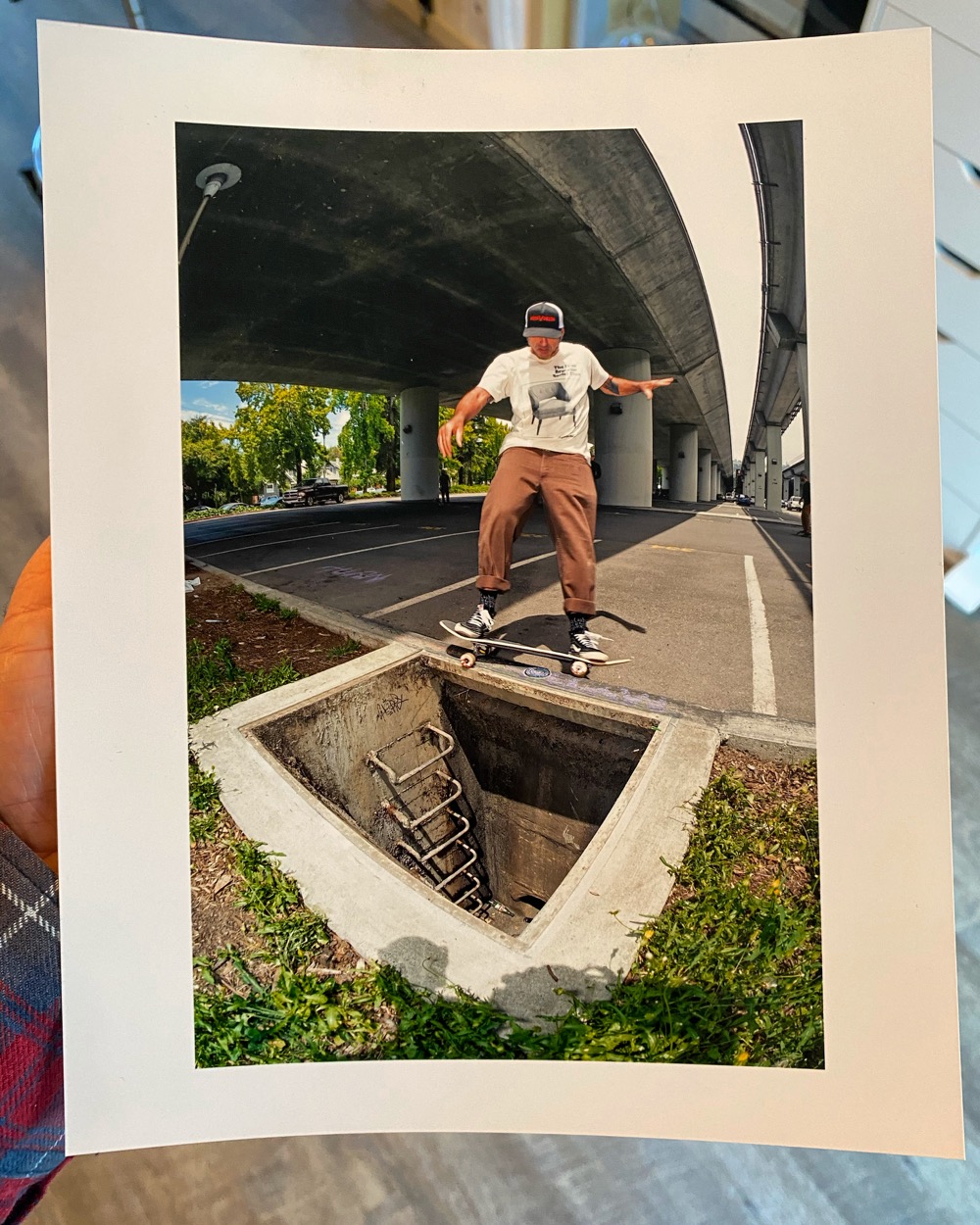 Upon seeing this, a person from the ether made the comment that it was perhaps the most dangerous curb trick ever performed.

Around that same time, I’d happened upon a clip of Rhino and Ace breaking in what could only be described as an utter body breaker, somewhere on the coast of Southern California, which is one hundred billion times gnarlier than the sepsis hole I navigated; 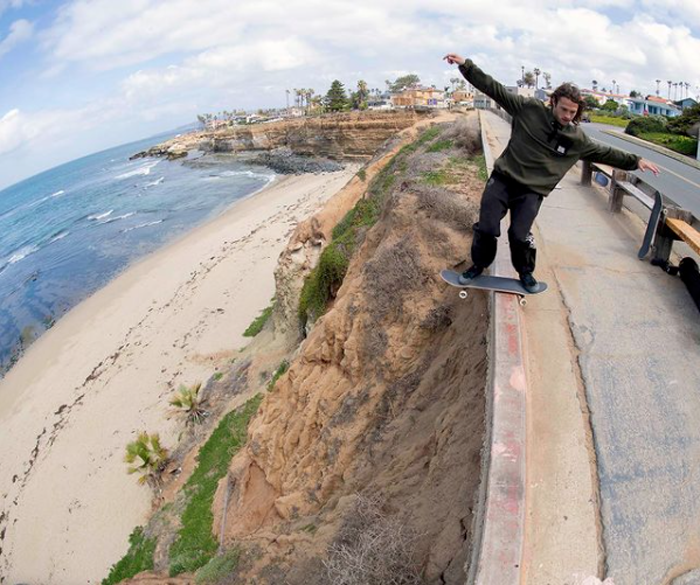 Thankfully there’s a full video that came out at the head of the week just so we can all appreciate just how stupidly scary this is in real life;

Anyway, inspired by their efforts, I loaded up my own bag of tricks, and headed to a cool double sider I spied a couple of weeks ago; 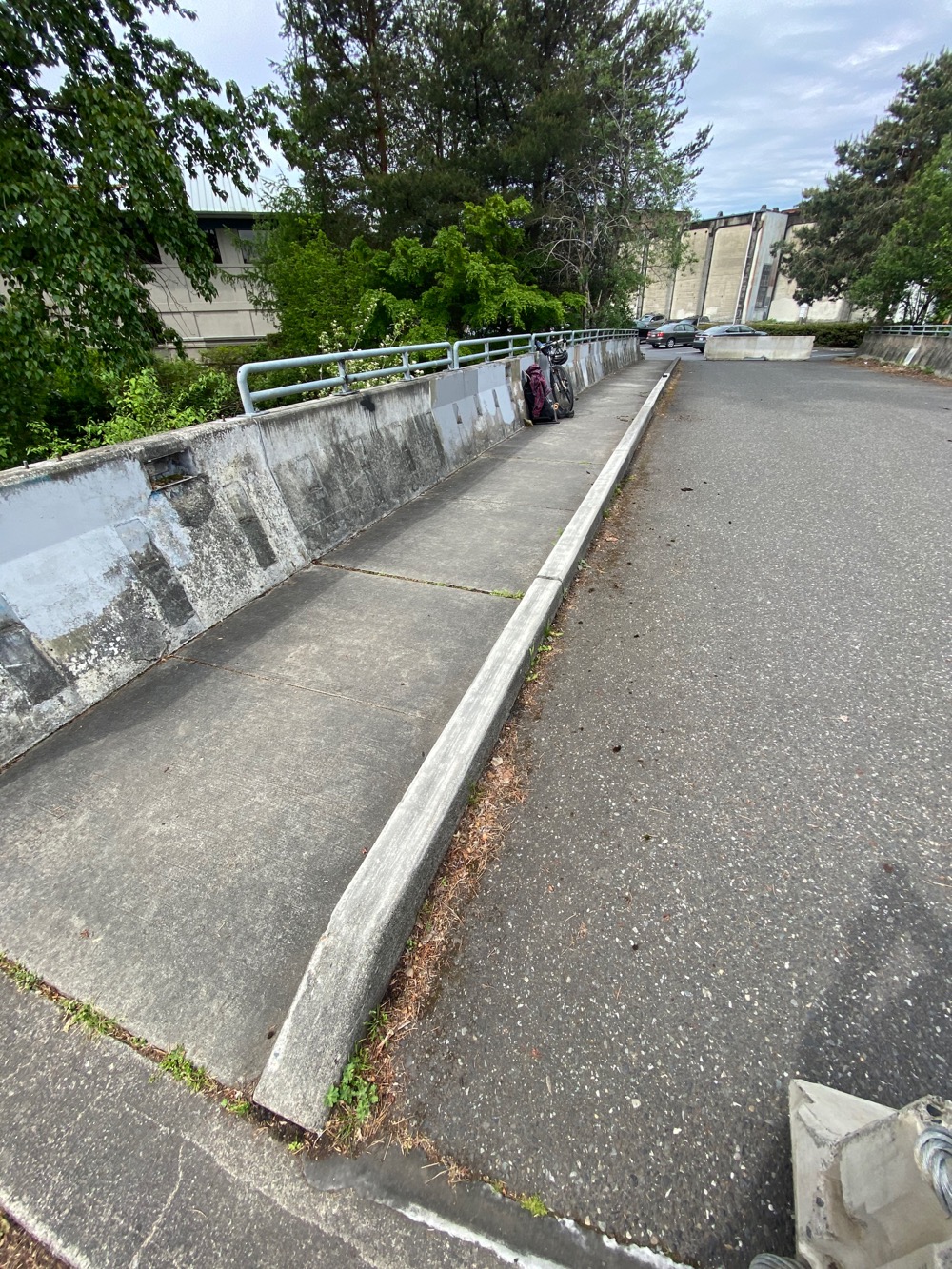 One section between the gaps had already been pretty well buffed out, but I felt inclined to treat the entire expanse.

I rub bricked every one of the fifty or so feet, used two quarts of bondo, painted on two coats of cement prep, shoveled and swept out all of piles of tree fall, and bingo bango, Hellingham has its own brand new spot;

Also, I apologize for the vertical filming.

It was a rookie move, and I promise to do better-sih next time.

Unrelated to the last thing, or probably the next thing, I’d like to present some super goofball cranks I recently found on mountain bike super star Joe Murray’s FB feed; 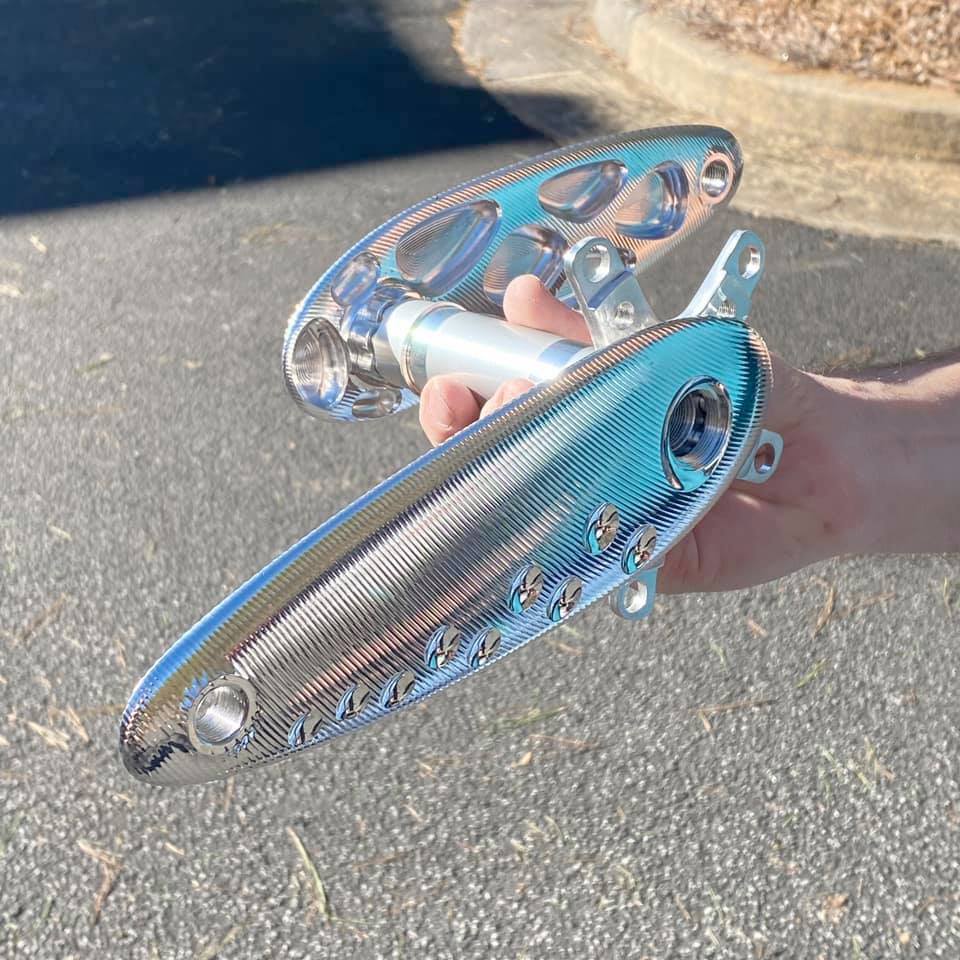 Some folks might remember Magic Motorcycle Cranks, that if I recall correctly eventually got picked up by Cannondale’s Coda imprint? I don’t know if that’s right… 1996 was a long time ago.

They were pretty bang-zoomie until the machined and bonded layers eventually detonated, resulting in the razor sharp, and varyingly jagged edges absolutely destroying a calf in less time than it would take you to blink an eye.

But up until that point, they were pretty dope.

Moving on to other, previously revised topics-

So, did you all know that I recently spent a ton of money I didn’t have on a limited edition of archival prints that can be found for sale here;? 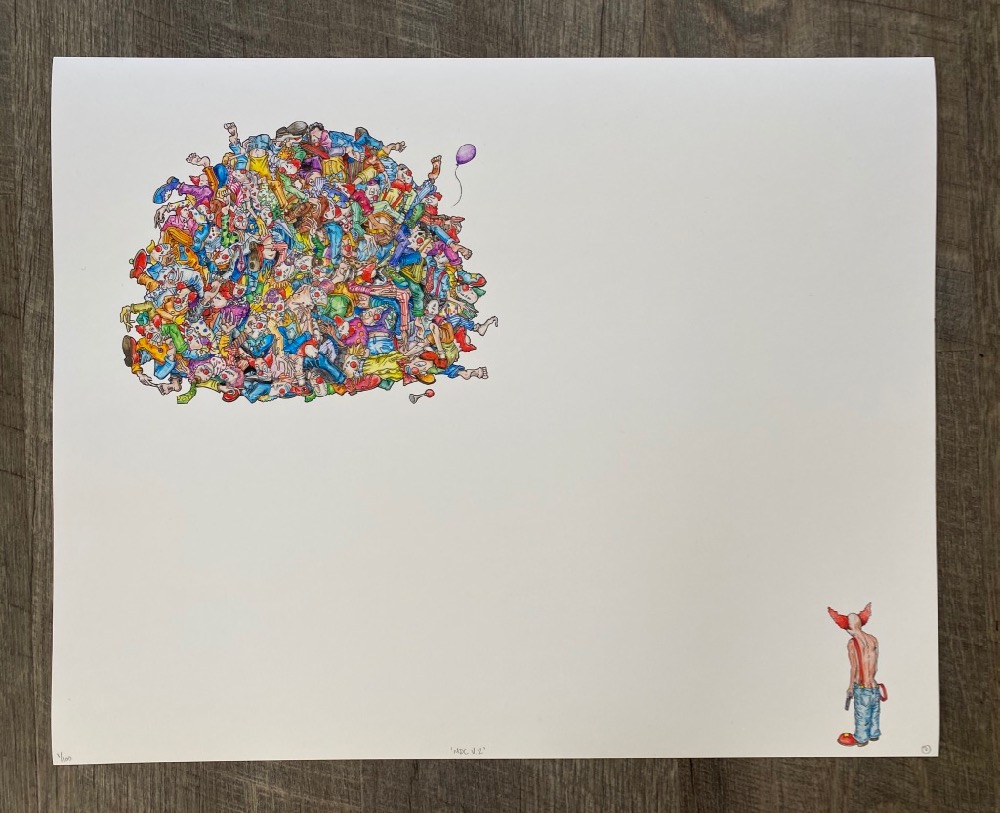 I mean, I’m certainly not trying to bully anyone into purchasing one, but then again, it’s Monday night, and I’ve been drinking, and it seems like the right thing to push.

Also, it allows me to finance the next thing that will get squeezed out go the AHTBM machine, which will also allow me to pay the electric bill, and so on.

If you’re into it, can I ask for a miracle? 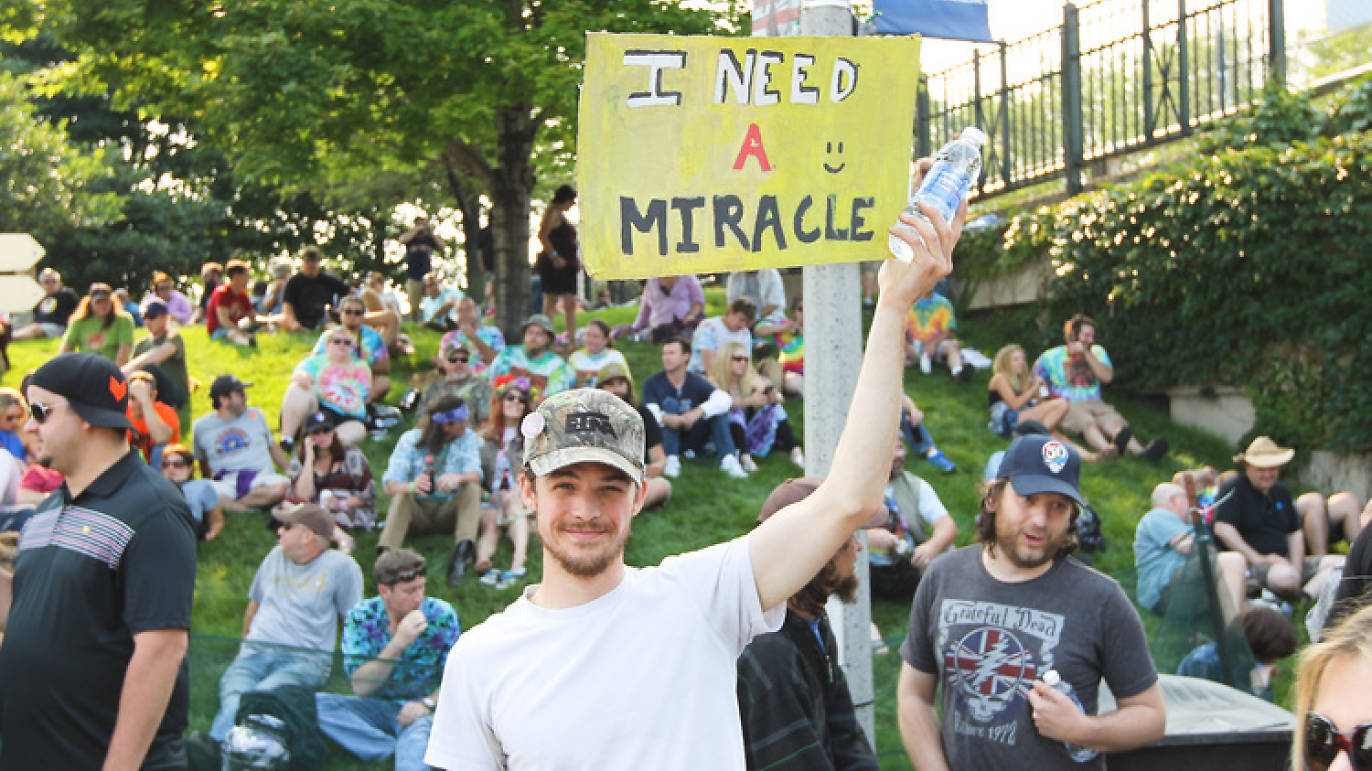 It’s with that, I also ask for your forgiveness for using a Grateful Dead reference.

I’ll add it to the laundry list of stuff I can’t forgive myself for.

In other news of fully self gratuitous topics- Are any of yinzers familiar with the ‘advice’ column I write over on The Cycling Independent?; It’s super marginally good, and maybe one or two of you might get something from it.

Certainly, if you have a question, fire it off to stevil(at)cyclingindependent(dot)com and as always, I’ll give it my best worst shot.

Having said that, and as we begin to wind down, real quickly I’ll make a heads up for ‘a gift for a stranger’ number four; 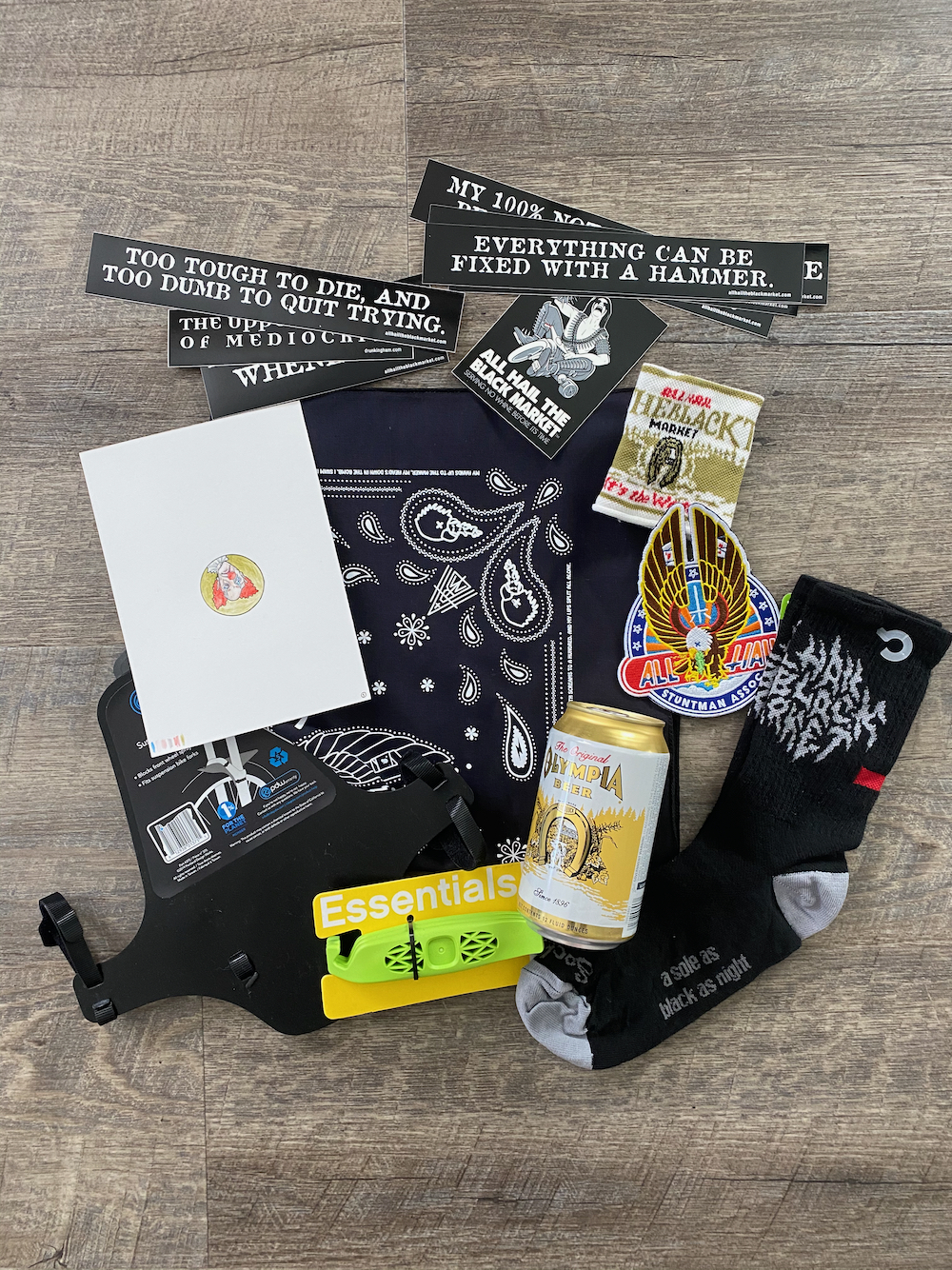 I’ll be dropping a visual cue on the old IG today or tomorrow, or whenever I come across a suitable hiding place. If you’re interested in playing along, keep your eyes peeled there.

Lastly, I’d like to illustrate what it’s like to not be attacked in the woods by Hodala; You see, as rowdy a reputation as the have within the cycling community at large, they’re generally sorta nice people.

Since my relocation to the PNW, I have been even further struggle-snuggled into their realm.

Is it something I would hope for?

No, not so much, but is it something that’s my reality? It is, and to a degree, I suppose I have to give a weird, and kinda prison-sexish sort of thanks.

If you know Hodala, then you are certainly familiar that to take that particular edge off, there’s not enough ‘off’ that could be topped.

6 Responses to “Trying to top off.”