Before I get after today’s post I will bring to your attention that it was just last week when Outside Magazine announced the purchase of Pink Bike, Cycling Tips, and Trail Forks. As independent media channels get gobbled up and/or disappear on the regular, this merger might cause some concern.

Personally speaking, Trail Forks was the only one of the three I was very familiar with, and I’m not entirely sure how a media company might monetize it, unless you have to subscribe to use it. Maybe you already do… I’m in the dark on all of this, but I’ll tell you one thing- If Outside wanted to buy AHTBM, I’d sell it so quickly all that would be left in my wake would be a couple of bills spinning circles in the air behind me.

As someone much wiser than I am once said, “you gotta sell out to eat out.”

So if any of the check signers over there are reading these words, call me;

For now, I remain independent as shit, as does another site where I’ve been spending a lot of time lately, The Cycling Independent, where I have my own little corner, Answers From A Bottle.

In this month’s episode, I discuss, hanging art, foot pain, making your way in a new town, and the history of the Underbike Industry Mixer©™®; Ifin you have a question you’f like addressed, then please fire it off to stevil(at)allhailtheblackmarket(dot)com and I’ll do my best to answer it properly.

But not only that, several months ago, two of the three principals at Cycling Independent asked if I would be interested in helping out with a podcast. To be honest, this is an idea I’ve bounced around in my head for years, but since I had no idea what was involved in such a thing, it grew no further than that. Certainly having the motivation and encouragement from folks who already knew how to go about producing such a thing alleviated my trepidation.

So we began recording about a month or six weeks ago, and have four episodes in the can (and are recording the fifth this very morning). If you’d care to give it a listen, It can be found here; 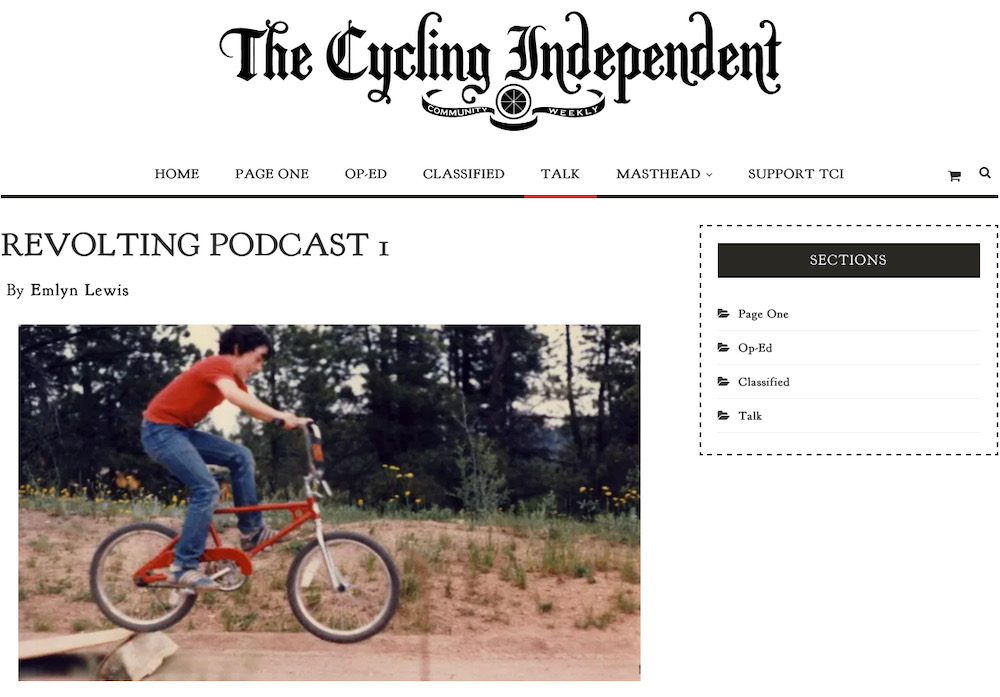 It’s absolutely as awkward as you’d imagine a conversation between two people who don’t know each other might be. Also, I’m in the process of tweaking my mic set up so it doesn’t sound as if I’m in an oil drum.

Funny thing though, and likely a topic I will be bringing up when next we record, is it was in the midst of recording for the fifth time (but the first time we were recording a different podcast called ‘Vinality’ about records, which may or may not never see the light of day), when I realized I actually do know my co-host. It was during this site’s first few years of existence, when I was getting regular emails from some guy who went by Robot. I was partial to them because the were well written, and would always include references to music that I did like, or music that I would like.

Eventually the emails stopped, but I always kinda wondered what happened to the writer.

It turns out I started a goddamned podcast with him.

It just goes to show, that no matter where you go, there you are.

Unrelated to the last thing and also to the next, this is an important video to watch;

I thought maybe I’d posted this before, but who can remember anything anymore?

Finally, I’ll conclude today’s effort with the only photographic proof that the first Hodala team training camp is in the books; To commemorate the day, I submitted a new sticker design into production;

They’ll be in the store within the next few weeks.

And do you remember this post when I unveiled our best new game called Biër Stömper:

Well, we did it again with the invention of the ‘mustard high five’.

It’s every bit as awesome as it sounds, (and due to the fact that no one documented history being made, you”l just have to use your imagination.)

Step one: Load your dominant hand up with mustard.

Do this until you’re out of mustard, or until you get kicked out of the restaurant.

Also don’t forget to leave a $100 tip, because- (and as hard as it might be to image such a thing), you’re not always as funny as you think you are. I mean, I am, but you probably aren’t.

It all boils down to what sort of reflection/impression you want to make/think you are making.

Neither of which are probably very good