Because at some point last Tuesday I blinked, and the next thing I knew it was today, I’m going to do my best to scrape the proverbial barrel in order to assemble something with which you can blissfully waste the next ten minutes off your existence. Who knows? We both might even get something out of it, though I wouldn’t put money on it.

Firstly, for any and all who have ears that they might like to fill with the assorted sounds of rock and/or roll, this very evening I will be playing almost the entirety of my ample collection of 7″ records at Bellingham’s own Cabin Tavern; 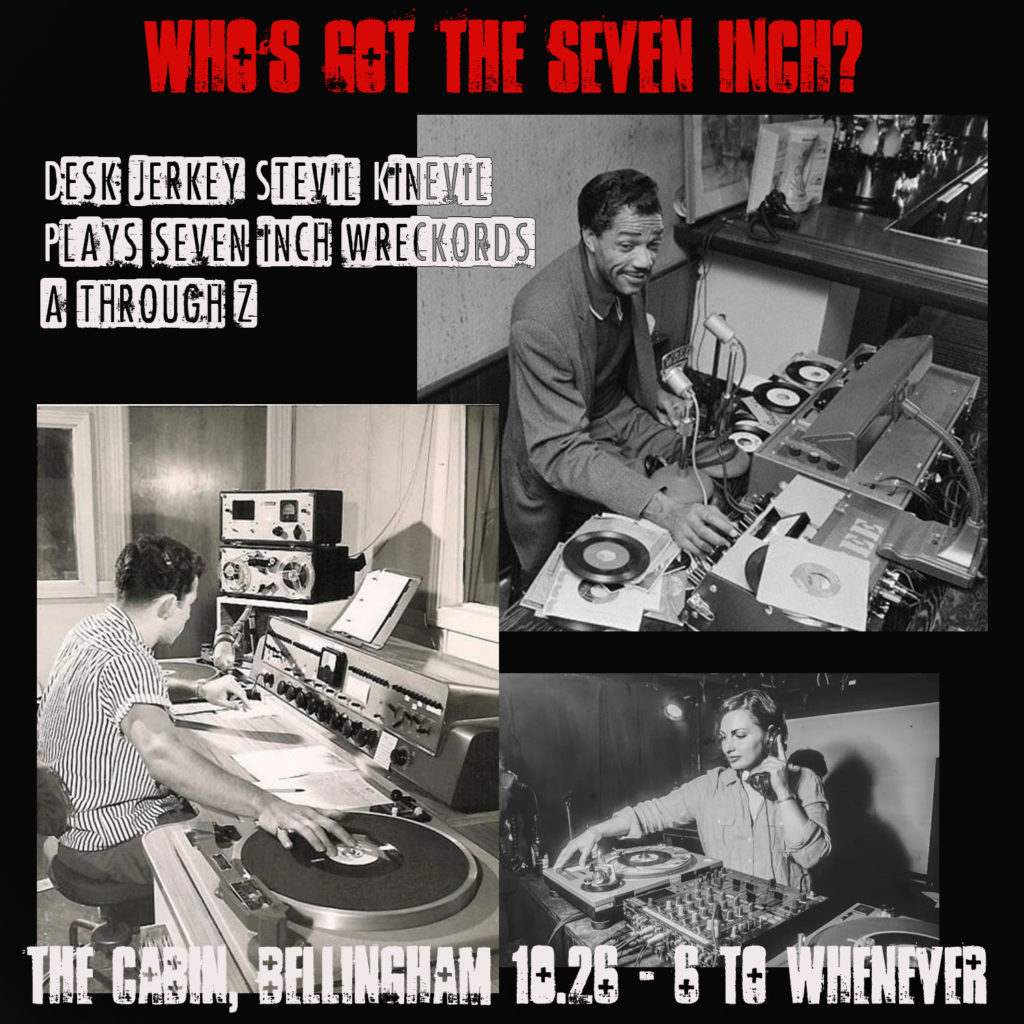 This is a thing I’ve wanted to do for years, and was given the chance to scratch the surface at HiFi wheels’ Interbike booth a number of years ago; 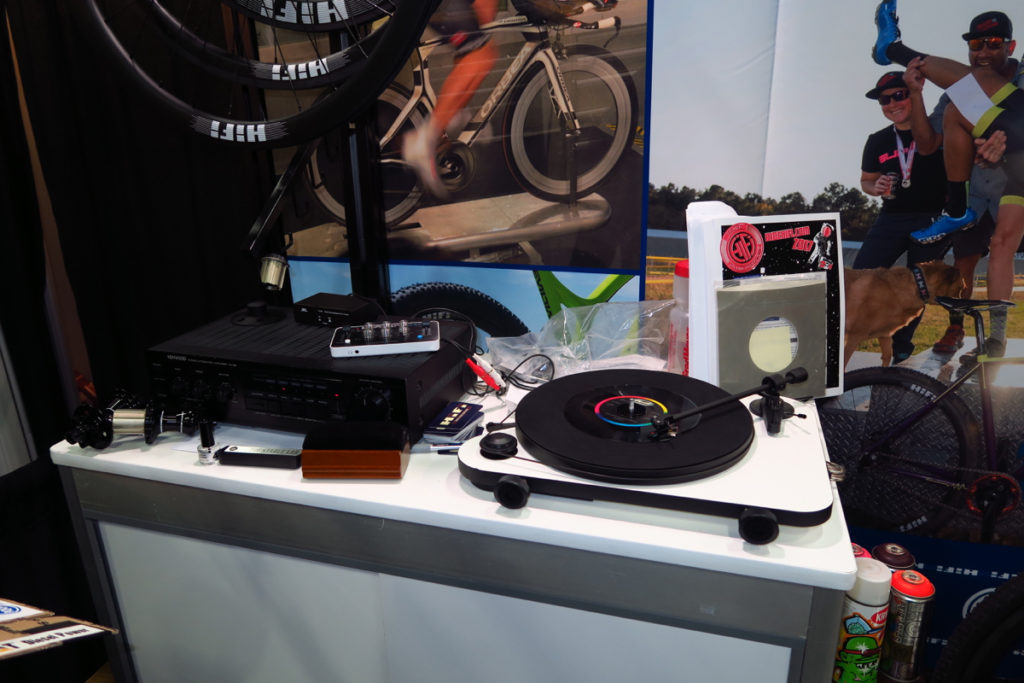 Alas, they didn’t have an optimal set up (especially when it came to changing the turntable speed from 33 rpm to 45, as I had to gently remove the drive belt and very carefully replace it around the outer circumference of the turntable, lest the band would fall off and disappear into the bowels of the mechanism forever).

So, suffice (it) to say, The Cabin has a real honest to goodness DJ set up, and I will be playing the hits from American Psycho Band all the way across the alphabet to Zeke, and everything in-between, with ample stops at Rocket From The Crypt and The Hellecopters; And maybe if people play their cards right, I’ll bust out one of my GI Joe stories while I adjourn to the bathroom to empty my bladder, or to the bar to fill it back up again; And just so you don’t think I’m some kind of one trick pony who just plays noisy guitar driven rock, after a couple of years of hunting, I just finally tracked down this spicy Eddie Holman slab;

Rest assured, the cuts are gonna be lethally deep.

In other news of upcoming events, Simon from BV, Colorado’s Push and Pull Bar with a bike shop in it reached out and asked if I could make a flyer for an upcoming party they’re having at the space.

Because at one time I was mildly versed in Photoshop, I happily agreed, but after working on the piece for hours, (original photo by Matt Carroll), and discovering that perhaps all of the updates have left me completely befuddled, I delivered the best of my abilities, which clearly is not much; 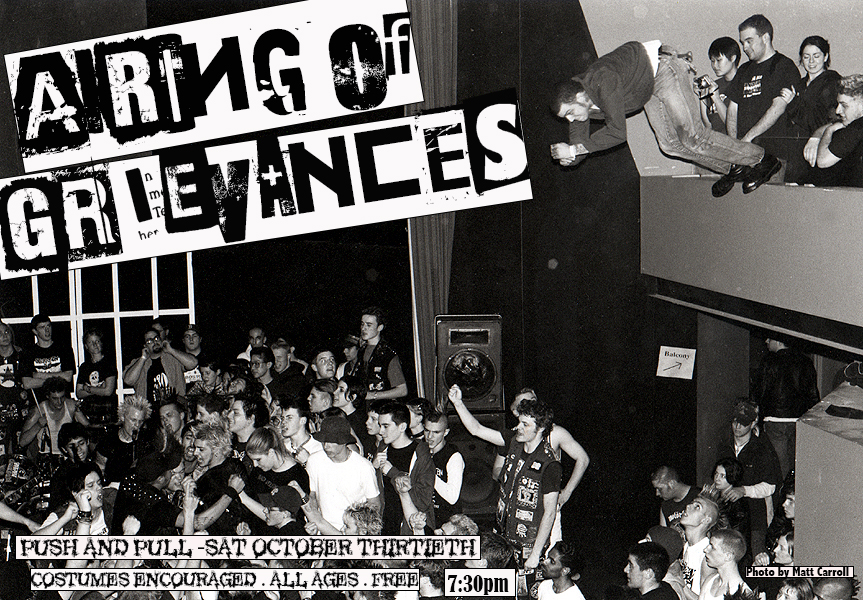 If you live in, or around BV, maybe mark your calendars to go get your slam dance on with a bunch of mountain nerds, while being lulled by the sweet, sweet sounds of Airing Of Grievances, and get a load of just exactly what a punk scene in a town of 2,700 people looks like.

Moving on to matters regarding my further attempts at rounding out my collection of cease and desist letters, It was a few years ago when Justin did that amazing artwork for the AHTBM/Hodala Wizard Staff arm warmers; Upon receiving my portion of the artwork, he requested that I not use it for anything else. Respecting his wishes, I didn’t ask why, and I just let it go.

Randomly about three weeks ago he emailed me, letting me know I was finally free to do whatever the heck I wanted with it, so I immediately sent it off to all of my vendors for stickers, patches, and shirts, which according to UPS, will be landing in the store tomorrow; I realize that Soulcraft ripped off the Oly logo about twenty-five years ago; -But I’m nothing if not unoriginal.

Anyhü, if you’d like one of these badass new ringer Ts, come back here in 24 to 36 hours, and keep your eyes peeled to the socials, because I’m gonna be pushing them fiercely.

And now, because we’re on the topic of cheap beer, and it seems like I inadvertently always get the honor of nearly debuting every single Red Fang video, it’s my pleasure to do more of the same with their latest, ‘Rabbits In Hives’;

Does anybody else get a distinct ‘Close To Me’ vibe?

Finally, I would like to post an image that was shot by Josh Becker of Dan English. I reached out to him to see if I could plug it in today’s post, but he’s a busy cat, I hadn’t heard back by posting time, so I’ll just wet your appetite with a screen shot of his IG feed); It’s such an amazing capture, and that Rock Lobster Paul certainly does rally some incredible talent.

If that one single image alone isn’t enough to stoke your week’s worthy of party o’clock, then I’m afraid there’s not much hope left for you.