Good morning from us here at AHTBM, (‘us’ being the voices ion my head and me), and Battle Axe Custom Sewn; 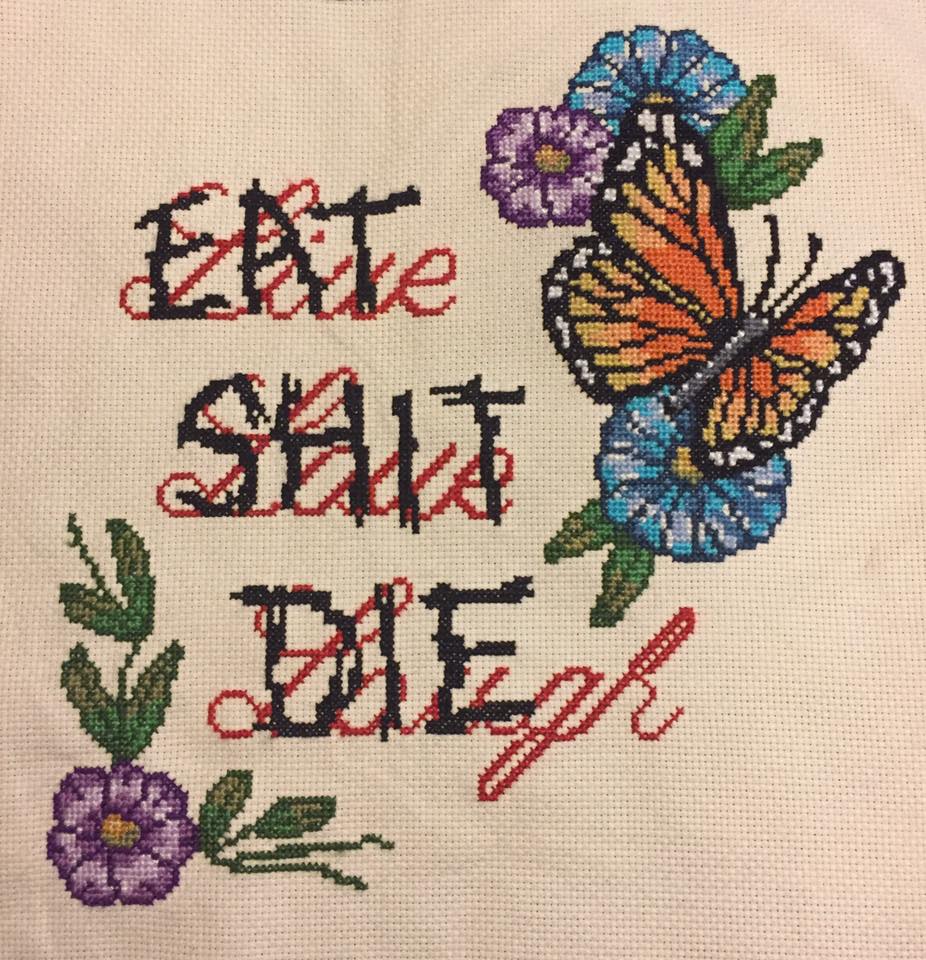 So, I have some big news here at the Black Market machine.

After a rapid succession of requests to do another run of WSRW shirts, I finally relented. Now, the reason for my resistance isn’t due to a hamfisted effort at making them appear more desirable or whatever. The truth is doing any sort of pre-order is super difficult for me to keep organized. I don’t use spread sheets, or anything reasonable like that. I essentially keep track of how many I need to order with a blank piece of paper and hash marks. On the outside, this house in which I live may look well managed, but the truth is for nearly every one of my twelve years in business, I’ve mostly kept it together with masking tape and crossed fingers. 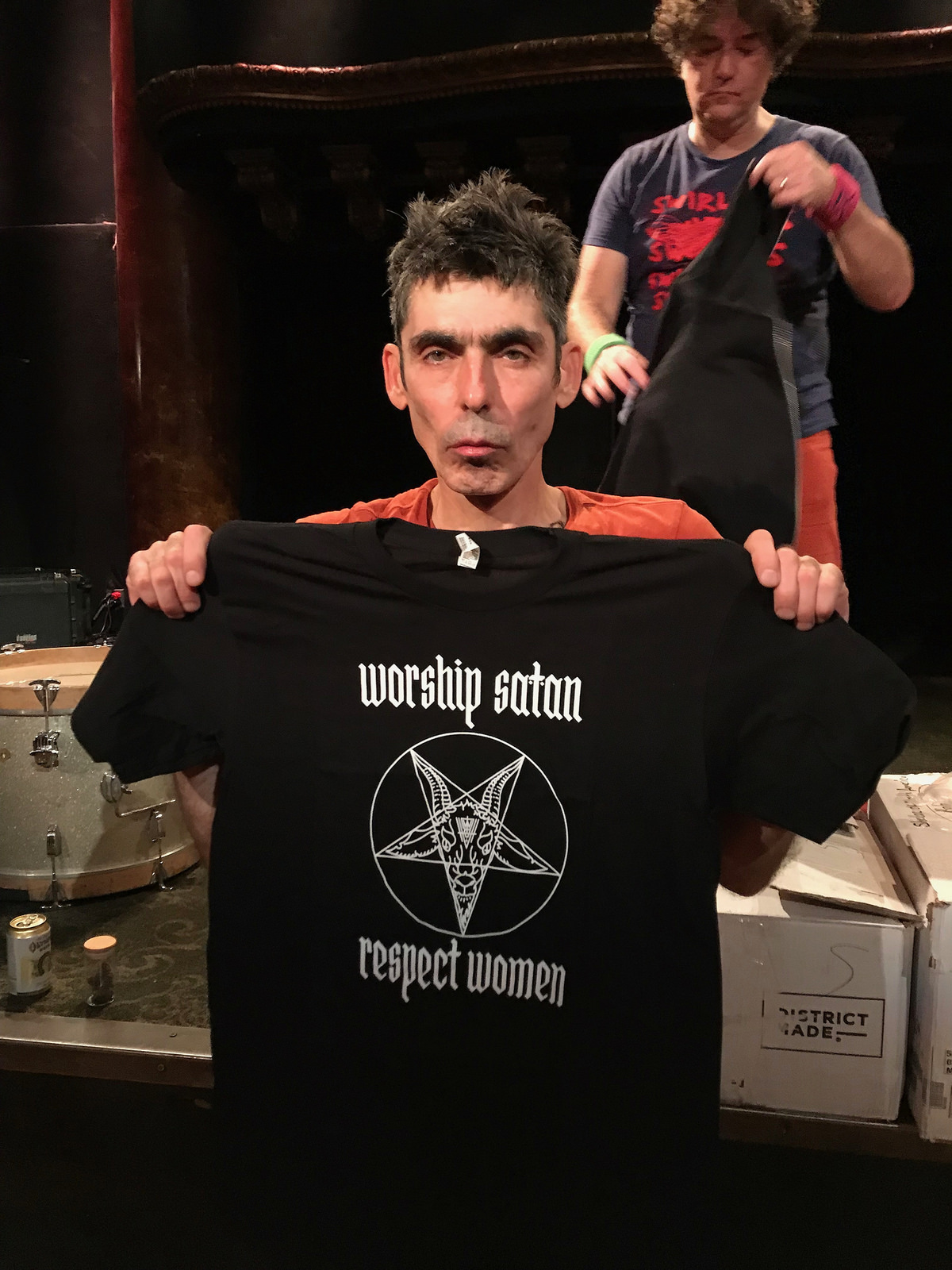 You have until March 17th to place an order for a hoodie; 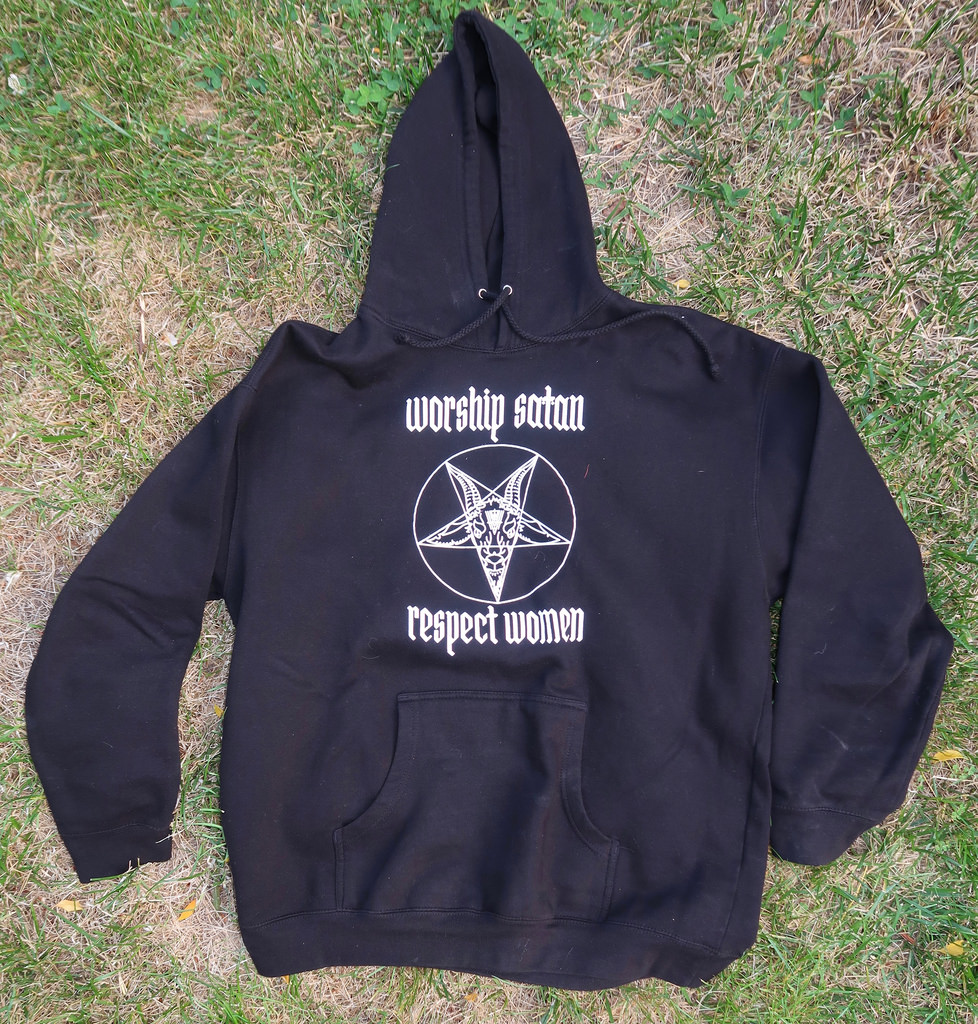 I don’t know when I will be doing these again, so I’d recommend to strike while the iron’s hot.

Plus, you can remember March 17th, because that’s St. Patrick’s Day, and you’ll assuredly be preparing to throw up behind the dumpster at McGillicuttyginnagoggle’s dumpster along side all of the rest of the amateur squad; 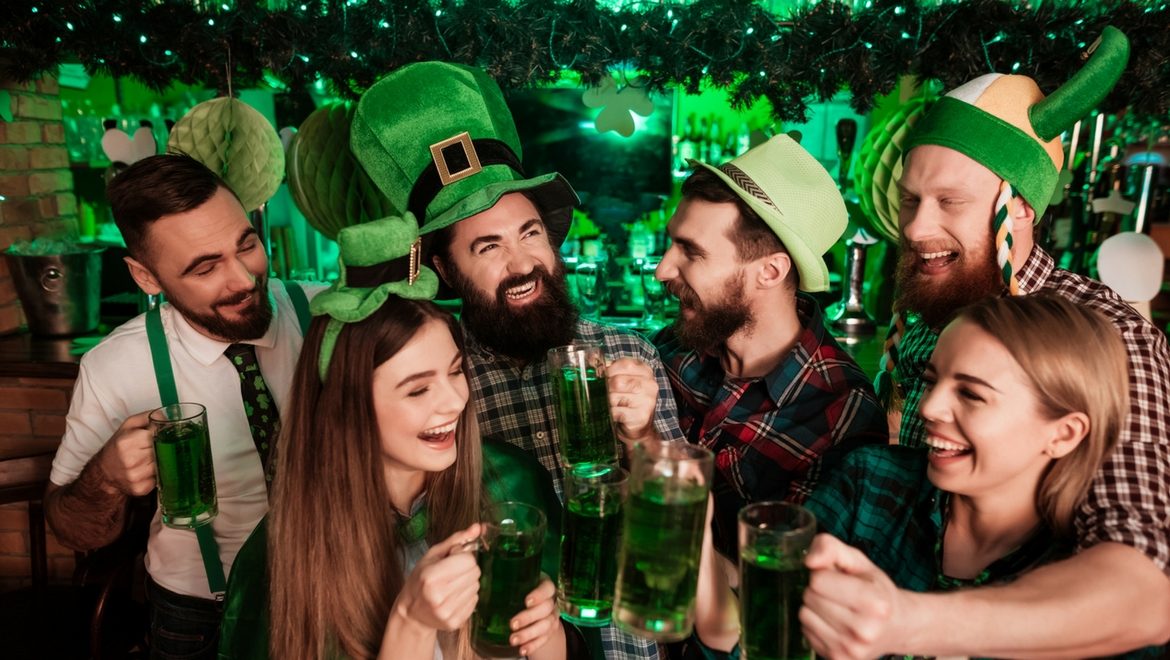 As always, a portion of the money generated will be given to RAINN because they do important work, and help make the world a better place for people when they need it the most.

Now I would like to present a little video collaboration I recently competed in association with the efforts of one Amped Components;

So, Amped proprietor Jim reached out to me to see if I’d be interested in making a thing. I was already using a top cap vendor, but decided to give him a shake just on account of he seemed like a nice guy who was eager to get his empire cooking. He’s been involved in BEER components, Squid stuff, as well as a whole array of mess-making around the Sacramento area, where we first crossed paths many years ago, though neither off us remember specifics.

So it feels good to bring this back around to the realm of the family, and get some goods made by someone with ties to the region that for better or worse helped make me into the person I’ve become.

I have a real good feeling that I should be getting these in the store just as soon as I get them in hand, and can get somebody to let me use their animal to get a photo of one on their head, like I did with Buddy, and my last one; 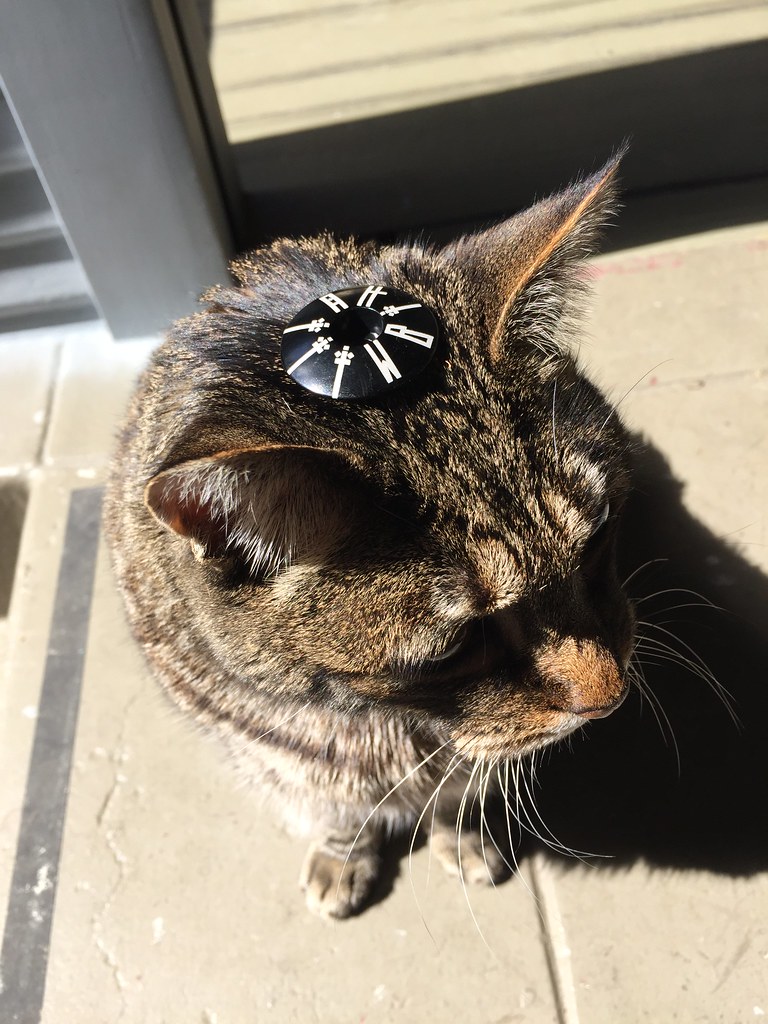 What a dazzling creature he was.

Anyway, if you’re interested, I’ll be screaming it in the various social arms of this train wreck, so just keep them peeled there.

It’s not as if you have anything better to do with your days.

Now for absolutely no reason, I will post a photo I took of my mountain bike yesterday morning that I was feeling pretty partial to; 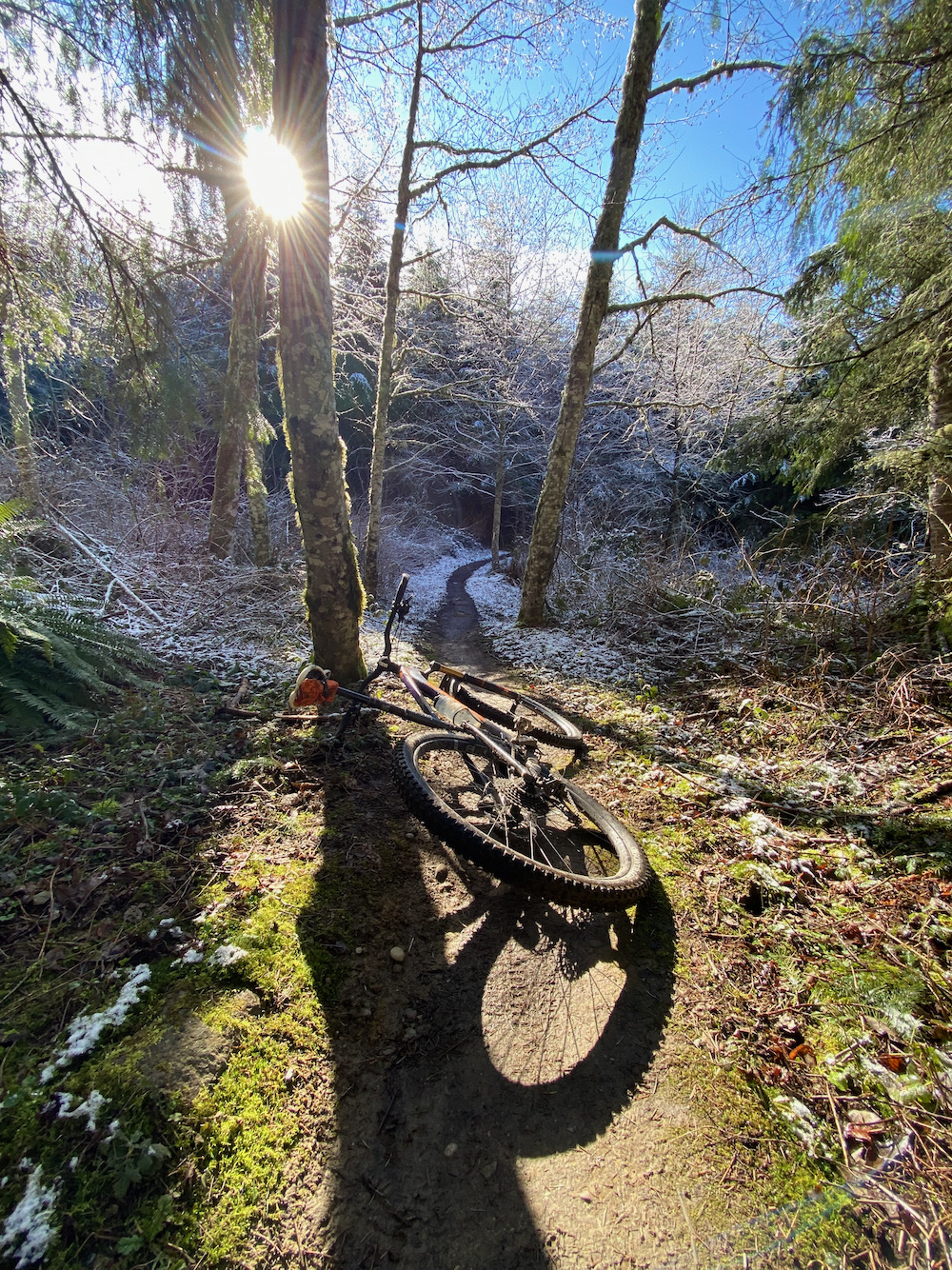 Truth be told, it was over a month ago that I blew my rear shock out. I called some favors in at Fox, (by ‘calling favors in’, I mean I called and asked for a favor), and before I knew it, I had a spanking new Float DPS in my hands. Then I had to wait for a spacer/washer kit, then I cracked one of the washers, then I got another washer kit, and then I finally was able to install the shock, and re-tighten up all of the linkage hardware, and at long last had a bike to ride again, and things felt right.

So the photo is a bit of a metaphor. Life is always sunny and bright right before you fall into the abyss.

Oooor, how about darkness and light can co-exist? Maybe that one’s better.

At this juncture, I would like to say that today marks the 16th episode of Revolting, (we have it on iTunes as well, for those of you who are fancy) for your listening pleasure; 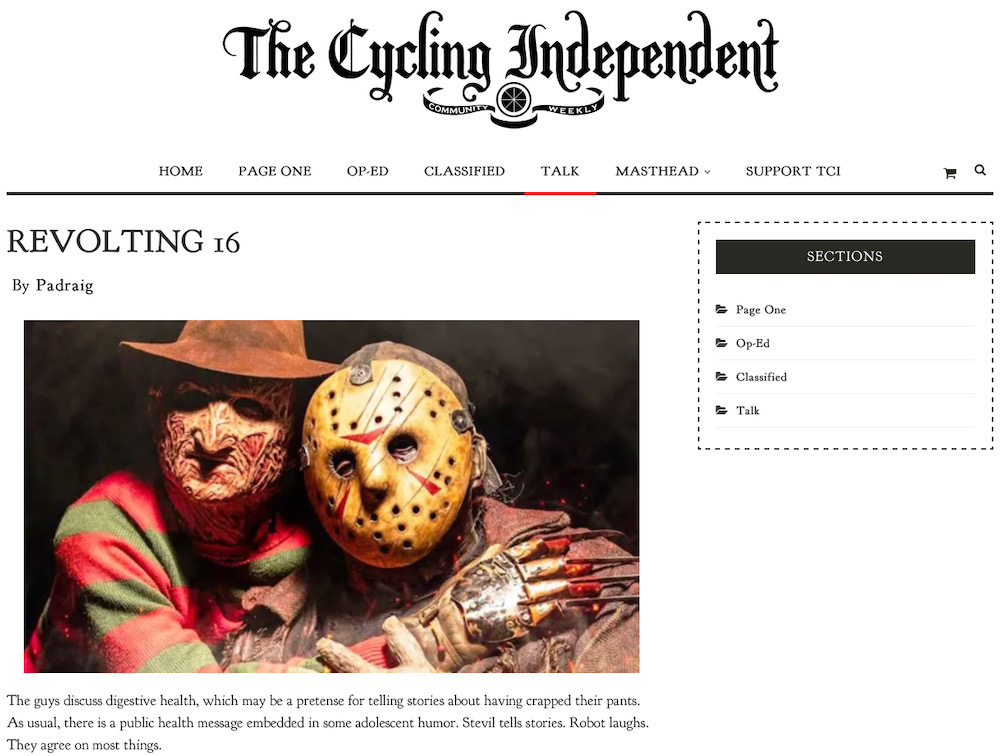 I’m happy to announce that I’m finally recording in a closet, which means the overall recording quality is at least a couple of percents better.

We are officially official, which also means episode number 17 is when things really get good.

So to wrap this up, and in light of these very exciting developments, I guess here’s looking at me looking at you.

3 Responses to “Here’s looking at you, kid.”