My first ever mountain bike ride was a singlespeed group thing. Years ago, an old boyfriend, his roommate, and I (along with, respectively, a singlespeed Waterford, a
BMX, and my city bar-hopping bike) crammed into a rented Jeep Liberty and drove
all night from San Francisco to Portland to attend some renegade biking/drinking
event. Since sleep was apparently not an option, we drank red beers at breakfast
before switching to a steady stream of PBR and bourbon. Still being a resilient mid-twenties bike messenger, this was fine by me.

I was far past tipsy by the time the party started that afternoon, but being young, fit, and forced into real exertion by default (I was riding a 1994 converted Rockhopper with an urban appropriate gear ratio of 42-16), I kept up with the front of the group. Or at least, that’s how I remember it. The route was suburban and not gnarly in any shreddy sense, though it was gnarly in that we traversed a Superfund site. I had a blast. Riding dirt was so FUN, and everyone I met was the best.
When we got back, the boyfriend started in on me (as he had to every girlfriend
since his teen years) to get a mountain bike. I was the first recruit, soon I had the only dual suspension bike that was small enough for me and EP-able by him. Being
a car-less city dweller, I didn’t get out much, didn’t progress much, and didn’t fall in love with it. Nonetheless he almost immediately started on me to buy a single speed.

“But I suck at riding the geared bike I have.”

“It’s ok to walk a single speed, so it’s okay that you suck.”

“It will be cheap and everything is going 29er, this is your last chance to get a production singlespeed MTB that fits you.”

So, I borrowed more student loan money and bought a Bianchi Lewis. The bike was a tiny aluminum frame with an 80 mm fork and like 2-inch tires, it was harsh like
cheap bourbon and was not making singlespeeding look fun or easy. I could sort
of climb, but my handling was terrible and everything scared me. Obviously SSWC
was the perfect place for me, right?
In 2008, SSWC was only an hour away from home, and there was no way I’d miss it.
I had no intention of racing or riding that year. I didn’t and still don’t race bikes, and seeing as I’d been on the Lewis like 3 times, I had no business on that course: Skyline Park in Napa is essentially a pile of rocks.

But what happened was, there was a big pre-party the night before the race, that
the aforementioned boyfriend and I attended along with like six other guys we were sharing a decrepit motel room with. That bowling alley was operating on Reno rules or something, people were loose and rowdy and would have been kicked out of most venues. I didn’t bowl but my boyfriend’s friend and I invented this really cool trick where I took a big swig of beer from my plastic cup, then skillfully arced that mouthful of beer into the dude’s open mouth. Everyone but my boyfriend found this
hilarious. We all went back to the motel to continue behaving poorly. There was a pool party not appreciated by management, and I don’t know what else, I put myself to bed before that escalated.
I woke up groggy in the morning to my boyfriend expressing how not amused he was that instead of sleeping next to him, I was in the adjacent bed with his buddy, both
of us fully clothed.

I was exceedingly amused that the boyfriend had passed out next to another (also fully clothed) man, and that there were stinky dudes all over the floor. My amusement quickly turned to nausea when one of our crew got up to commence violently retching. I was sure I was next, and resolved to sleep it off and reunite with the boyfriend and new friends in the afternoon. But instead, I begrudgingly got up to see the boys off at the race start.

Someone decided that despite my incompetence I should participate. I didn’t have any money, so I started asking people in the registration line. I got 17 of the 20 dollars I needed, and the volunteer gave me a race number over the vociferous objections of some woman complaining that I needed to pay the whole entry fee like everyone else.

And off we went, and I surprised everyone by narrowly missing a podium spot in a very competitive field. Or, I completed only one of three laps, during which I crashed, cracked my helmet, mildly concussed myself, and walked a stretch before regaining my composure enough to resume my trail flail to the finish line. I took so long to accomplish just this that I was handed a “Finisher” bottle opener, which I immediately exchanged for the “DNF” souvenir I deserved. Then I drank the first cold beer handed to me before crawling under a picnic table and sleeping. Again, the boyfriend was not impressed, but he only had himself to blame for encouraging me to become a single speeder. We broke up a few months later. He married the next girl. I’ve had a few more boyfriends, all of whom were mountain bikers, some with more patience for me than others.

At some point I actually learned to ride my bike, but who cares about that? 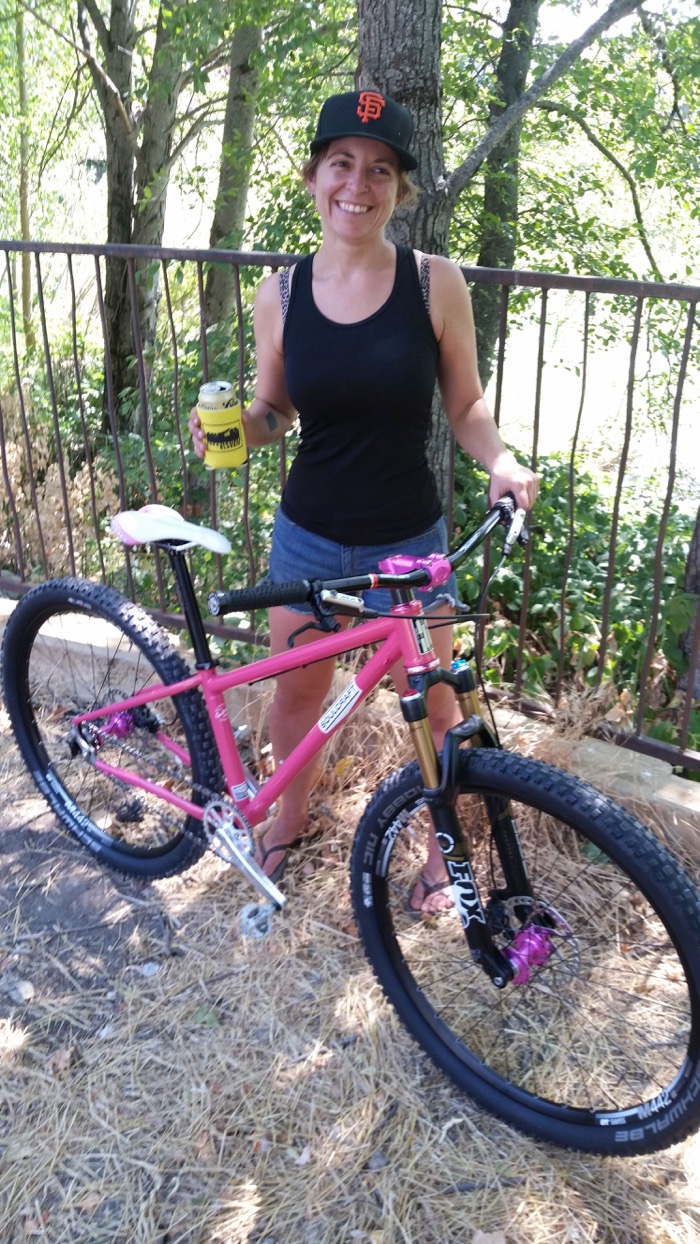