One of my very favorite things I’ve found recently while spanning time and space across the expanses of the internet is this website that challenges the history of BMX.
Now if you’re worth you weight in Tuff Wheels you no doubt have seen Joe Kid on a Stingray. If not, we maybe can’t be friends anymore.

I don’t care if you fancy yourself a died-in-the-wool roadie, a cross racer, a mountain biker, a fixed gear freestyler or if you don’t really even care about bikes, and only come though here to farm the random links, this movie is a jaw dropping ride through the history of BMX (at least as far as those other than the individual who created the above website are concerned) that will leave you with a huge smile on your face, and an itch to get a bike and go hang out in whatever vacant lot you might have available to you.
However, the newest offering featuring Danny MacAskill may very well have a similar effect.

Danny handles his commute better than I do.
Do you all like the mail bag?
I like the mail bag.
No sooner did I question my relationship with the South Monday do I get this email from Brent;
“You like to weigh in on how I should judge the P.O.S contest?“
As I told Brent, the only advise I could offer would be to judge it with an iron fist.
Rocky came through with a bit of randomness as well;
“Hey Stevil,
Pretty sweet shots of Russian gangsters.
I’m partial to this one:

He looks like this dude I met bowling in Minneapolis.
Also, I started my own blog. Liquid Astronaut.
Take care man. Have fun in Vegas.
later,
Rocky”
As for Rocky’s new blurg, visit often, and as far as the depicted individual goes, it’s good to see that he travels with a reservoir tip to prevent any of his grey matter from getting out.
That’s just plain smart.
From Sally I was offered some advice;
“Maybe you can sell a kidney…or your spleen to get back this year.”

Considering that I barfed both my kidneys and my spleen out at this event last year, I obviously no longer have those to sell, but I’ve got an awful lot of semen and blood, so I’ll see what I can do. I would like very much to attend this year’s festivities again, as last year was an epic hoot, and might I recommend whatever soft tissue or fluid you have of your own to pawn, you do so to see yourselves there as well.
Over the course of the weekend, I began renewed correspondences with an individual whom I have only met through my previous blog work. It seems as though at some point in June he suffered an accident that resulted in profound damage to his brain, and all functions that it is responsible for. Out of respect to him as well as his situation I am choosing not to go into much detail on the matter other than to say that one of our own has a long road of recovery ahead of him, and I personally feel very fortunate and honored that despite it all, he still is able to tune in here and at least experience from the sidelines that our community in the Black Market is still kicking, and will most assuredly wait up for him during his recovery.
He is a good guy with a very strong will, and can use all of the positive vibes he can get, so think good thoughts for our compatriot.
I look forward to seeing his comments, and insight back under the posts here with the other regulars where they belong.
From friends in Montana I was notified about an up coming season closing epic that while it’s too late to register for, if you were to ask sweetly, I suspect the powers that be might see their way to letting you join in on;

I was originally sent a pdf file containing all of the info, but being a crafty individual that I am, I changed the format, cropped it and will present the pertinent info for you now;
This ride is a celebration of the cycling days of old when road racing in Europe meant racing on unpaved dirt roads over mountain passes, in sometimes horrific conditions. The racers rode steel framed bikes that were built as much for toughness as for speed. They drank wine and smoked Gitanes to quell their suffering. “Nutrition” was real food, like cheese, salami, and a baguette. “Support” meant you ability to deal with adversity and the tire you slung over your shoulders. This ride borrows from the spirit of “L’ Elorica”, a hard ride held each year in Tuscany.
L’Eroica means “The Heros”.
So there you have it. Dust off your hairnets, sew ups, and aluminum water bottles and get on the good foot. if you really are serious about making it through for this, contact Reed Gregerson- cinorider@gmail.com.
They needed RSVPs by the 20th of August, so considering the fact that you’re getting your info from me, we’re all right on time.
I got another heads up for an event that’s looming in Wisconsin from Gomez;

For any pertinent information you might need, alls you gotta do is go here.
With a poster that right, you know you can’t go wrong.
This past weekend saw the return of the annual Giro Di San Francisco to its city streets. This momentarily gave me pause, as this race marks the 13th anniversary of San Francisco’s CMWC, and just as many years since I found myself waiting in line for the bathroom at the Zietgiest wearing nothing but a messenger bag, arm warmers, Sidi shoes and a cowboy hat.

My race that weekend was not alot unlike my career as a messenger was as a whole. I busted my ass, didn’t plan my runs very wisely, and in the end was left with not much to show for my efforts.
I was also ridiculously drunk for an overwhelming majority of event’s stay, so I suppose a parallel could be drawn there as well.
From The Most Factory Blog I got this transmission;
“I think these ladies are down with the black market.” 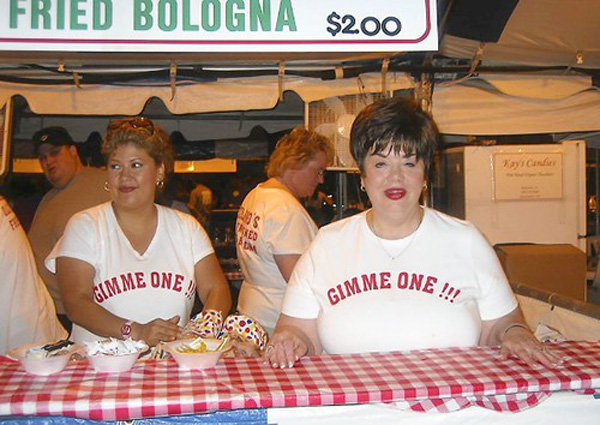 I can only hope for this to be true.
I see Wonder Bread bags peeking up from back there, which generally means deliciousness is on the horizon and I don’t have a single problem with that.
Besides, eating fried bologna served by a skinny person is somewhat akin to getting tattooed by someone with crappy work on their own body. You just shouldn’t do it.
There is my lesson for the day.
With that, I wish you a happy hump day.
Get to humping.

25 Responses to “Reality is all twisted up.”