First things first though. The mildly popular ‘Downzig’ shirts have arrived and are available for sale through me, (you know, with the Pay Pal), Stroker Ace, One on One, and Chrome;

The ‘Black Metal’ shirt has gone through some changes on the design end, and as such has been held up, but I’ll let you know when those drop.
Lastly, my pal Wes (seriously, click on that link- my man is a heavy hitter) has offered up his services on a third shirt.. A collaboration of sorts for which he has taken a drawing of mine and made it look less like crap.
For those of you who might be curious, an online store still is forth coming.. I just wanted to wait until I had a broader array of product with which to stock the shelves.
In news that has nothing to do with my dwindling finances, Bobo sent me an email containing videos full of old timey cyclocross bicycle action. 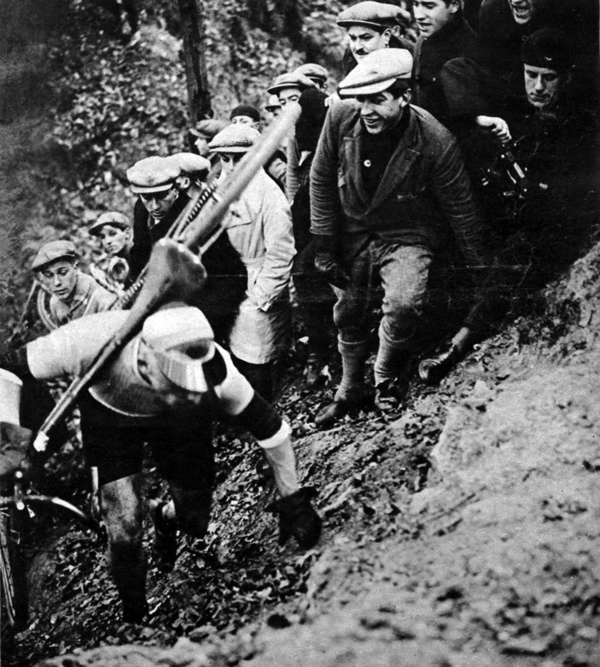 Oui oui, bro.
Gypsy the Punk wrote a sonnet to me that the fellas in the clip would most assuredly be able to appreciate;
“A Black Market poem for Black Market riders:
“Ode to the saddle sore nestled in the crack of my right butt cheek…”
Oh saddle sore, saddle sore, why are you so angry?
I wear Assos shorts and apply butt butt’r to my shammy,
I buy expensive saddles, and keep you clean and dry,
But no matter what I do, you bring tears to my eyes.
Oh saddle sore, saddle sore you cause pains and agonies,
If I didn’t know better, I’d say you were a case of herpes.
When I get on my bike you make me feel like I’m going to die,
You bleed and spread ever closer to my wrinkled brown eye.
Oh saddle sore, saddle sore won’t you please heal and leave me alone?
I worry that one day you will abscess and eat your way through to the bone.
The bike fitter guy says I got you ’cause I’m not flexible enough,
But my wife says the problem is that I’m just not that tough.
Oh saddle sore, saddle sore why do you treat me this way?
Don’t you know that there isn’t a price on earth I wouldn’t pay?
To be rid of you, to feel your ugly presence no more,
I’d be your bitch for life if you’d leave and walk out that door.
Oh saddle sore, saddle sore…
Hey wait, hold on, why am I writing poetry for you?
Would you do the same if it was I who was making you blue?
I’m sick and tired of putting up with your shit.
Gonna head to the doctor and get some antibiotics in a bit.
I’ll be done with you for good; no more pain, no more goo,
I only have one more thing to say, that’s right, you guessed it, “fuck you.”
Punk rock is as punk rock does,
Gypsy”
I always prefer folks send in some sort of visual aide with their written contributions, as I find that it makes the posts flow a little more cohesively, but in this instance I don’t think it could be argued that the Gypsy’s exclusion of said aide is such a bad thing.
In news concerning alleycat races as well as other bicycle related athletic endeavors, my homies from The Warlocks gave me a heads up for the newest in their series of Hellracer throw downs;

Those guys never half step anything, and if any of their other events stand as proof that they know how to put together a quality event, then number five promises not to dissapoint.
So a funny thing happened to me this weekend. I was, for the first time in many, many days feeling myself again, and so I decided to go out for a long over due mountain bike ride. I wasn’t 30 feet into the trail before a yellow jacket actually flew into my mouth and down my throat.
I’m no stranger to sucking bugs into my wind pipe, but as soon as it hit the back of my pallet I knew this was something different. As I stood straddling my bike, coughing and spitting, my taste buds were overwhelmed with a musky flavor that I hadn’t known before and my esophagus was exploding in a lightening storm of pain. Finally I was able to gag the soggy offender up, but not before receiving several sings inside of my throat. Proclaiming my displeasure with a barrage of expletives, I returned home and loaded up on antihistamines, as I was unsure what my reaction was ultimately going to be.
It turns out that after I was able to regain my ability to swallow, it just ended up feeling like a sore throat, and made my voice sound like that of Bea Arthur;

Luckily, as I said, I was eventually able to swallow again. This was a good thing, as the beer at the Artcrank show that happened later that night wasn’t going to drink itself. As you can see in this photo, everyone in attendance had very shiny hair;

It was like old home week, as I crossed paths with an array of folks who I used to messenger with, like Che;

and The Reverend, and Bruce;

As one might assume, Charles, who is the mastermind behind the Artcrank series, knocked another show out of the park;

It was the kind of night you wish could last a little longer, but as it was, I was wrecked on Benadryl and PBR, so I had to get up and out and make my way to see JMac off into his 42nd year of life;

Funny thing is that I have very little recollection of said ‘seeing off’.
I suppose that sort of thing is to be expected when one combines the beer and the pills.
Anyhoo, I guess all of this proves that even when inside of three weeks, one crashes their bike due to a collapsing fork and narrowly avoids a separated shoulder, and broken collarbone, then gets a flu, followed by a cold, and then caps it all off with a wasp flying down their throat, the glass still ends up looking pretty half full.
In closing I want to throw up a bit of info that I’ve been Facebooking and Twittering about through the tail end of last week. It would seem that Ian Mcdougall, the guitarist for The Riverboat Gamblers recently had a hugely detrimental meeting with an automobile and is now in the hospital with a myriad of injuries to his body, not to mention a rapidly mounting hospital bill;

Luckily he has a network of friends like ourselves, some of whom he knows, and some he does not, that are looking out for him. If you have a spare five bucks, throw it to him here.
I know five or ten dollars doesn’t seem like much, but as we’ve witnessed in similar situations recently, if everybody throws in a little change, it’s gonna help out more than you would know.
Alrighty then- enough of this claptrap…. It’s now that I’ll pull the plug on this latest installment, and put us all out of our mysery.
I hope that your weekends were fulfilling… Or at the very least found you without bees in your body.
I’ll catch you in a couple days.

14 Responses to “Mondays happen whether you want them to or not.”