Let’s kick this party off with a spy shot of what Curtis has got cooking;

You know, having signed up for Flickr back whenever I originally did certainly has its merits. Chief among them ranges from getting the behind the scenes with folks like the previously mentioned Curtis, and Ira Ryan to seeing amazing photography from folks like Kristof Ramon,

or rapid fire updates of events that I missed like this past weekend’s Stuporbowl shot by Bike Jerks;

Of course I could go on and on about the free smut that can be found there, but you all have computers. You know what I’m talking about.
I guess basically I like not only Flickr, but the internet in general because it’s a window to the outside world. One that’s available for me to look out of any time I like.
Kind of, for example, like my dear mail bag.
The only difference there is the mail bag’s windows have fried chicken grease and mud smeared all over them.
Though no matter how much grease and mud gets flung around, the alleycat flyers always look good.

So, Birmingham… do you have your ears on?
I like that Birmingham. I’ve only been there once for a wedding, the rehearsal for which I slept through. The actual reception was held in a wing of the art museum. Somehow I partnered up with the one guy who happened to know one of the security guards who in turn ended up letting me in to the contemporary wing where I saw my first Larry Rivers painting in the flesh. 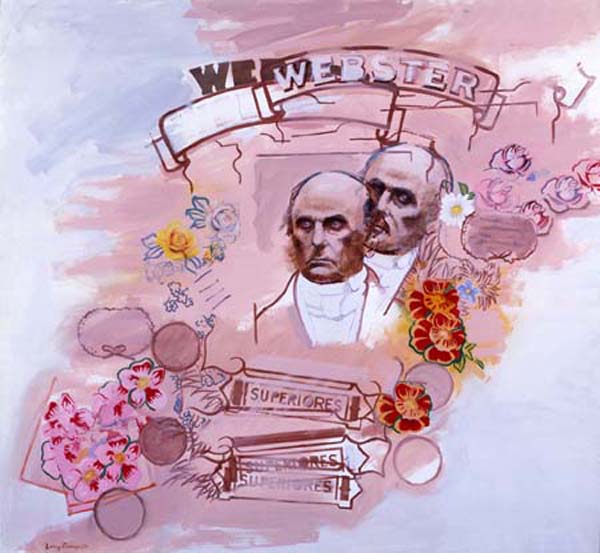 When you’re an art nerd, that’s the kind of thing that gives you a boner.
Having the aforementioned window allows me to almost never leave my house, because all of the information comes to me. Another case in point is this email from Matt;
“Hey, Stevil!
Take a look at this awesome mountain bike rally coming up in southern california. There’s not a ton of scummy/goofy mountain bike activity that I know of going on out here but I feel that the momentum is building. Two weeks ago I finished a four series mtb race on a singlespeed coaster brake organized by the same guy. It would be sweet if you could post this and get all the socal buddies psyched. Take a look at those categories!

Here are the Klunker Run details,
here’s one from the coaster brake challenge,

and here’s the whole set.“
Occasionally I even get emails from one of the 900 or so people who read this weblog in Australia. Of those 900, one of my favorites is Fyxomatosis Andy;
“Dan has the best sense of humour ever, this was in the final switchback of a massive cunt of a climb that had us hoofing it a good chunk of the way.

Photo poached from The Skateboard Mag.
Without exception, Natas rewrote the entire rule book and finally proved to me once and for all that I was the second crappiest skateboarder in the world.
Every now and again, I’ll even receive a transmission from The Bike Snob;
“This SNL skit was good if you’re old like us.”

The enigma that is The Bike Snob has just dropped a hint as to what age group he exists in, but having personally crossed paths with him, I can say that this is a bit erroneous, as I wouldn’t guess him to be a day over 20. This was also proven during our time together in New York when he was bounced from a bar for attempting to gain entry with his McLovin I.D.
Occasionally the magic box also delivers news of the industry that I might find of interest. Just such an example is the recent turn of events pertaining to Joe Parkin, as well as his nice hair both finally getting a real job. Finally the time has come where can put all of this blogging and sitting around coffee shops, writing books nonsense to bed and earn an honest income.
Of course I cannot neglect to include this shot that Loudass sent to me of a younger, and leather Members Only jacket wearing Friendly Paul engaging what appears to be a romantic Samba with a vodka bottle;

He becomes less friendly when the dance comes to a conclusion.
I’ve mentioned previously that I have a soft spot for random notable dates. Sometimes I have them marked with red ink on my calendar, and sometimes readers keep me abreast of the important ones that I might otherwise would have forgotten.
An example of such is this email from George;
Burt Reynolds turns 74 on 2/11 and that sob has to share his glorious day with losers Sheryl crow and Jennifer Anniston.
Whatevs I’m going skiing.
Happyfriday
G
This is an important date to remember, and perhaps coincidentally, just a few short days after the deadline for submissions for the Smokey and The Bandit tribute contest that Mission Workshop and I threw together. I suppose until a winner has been picked, you will just have to await the announcement. Billy and I have recently engaged in a round table discussion on the matter, but due to my complete inability to have any discussion about anything whatsoever, I can’t remember what happened. So if you happen to be putting the finishing touches on your project, the time to put your crayons down and turn your papers over is past due.
We should be able to announce the winner by the end of the week.
I think right about now I will draw the shades on this particular window, so until next time, get off my lawn or I’m gonna call the cops.

12 Responses to “A crystal ball by any other name…”