Now then, in regards to the following clip of LCD Soundsystem, I have to offer thanks to Newt for his tireless efforts in keeping his ear to the ground.

I still would have preferred the bear people employ some pepper spray and a taser though.

In other news of the WWW, my old friend Ian from Wend Magazine gave me a shout which you all might be interested in. In celebration of Bike To Work month (I don’t do that anymore. I just mostly shuffle around my house cloaked in a dirty bathrobe and a dazed fog) they have pulled out all of the stops with their newest contest.

Check that out. For submitting a photo of your commute you could possibly win a whole array of stuff, not the least of which is a watermelon that looks like a helmet. Sadly I am not eligible for said contest as the three foot span between my bed and my desk apparently doesn’t count as a ‘commute’. They are a bunch of enviro-freak sticklers at Wend, they are.

But who doen’t love contests? You have to do very little in order to win a whole lot, and while we are on the topic of such things, I can announce the winner for the ‘Angel picked a contest, only to be altered by me for a chance to win a signed copy of Come and Gone by J.P.H.N.H. contest’.

As I said at the outset, after completing the challenge myself, there really wasn’t that much to it, and ultimately the whole idea of the thing was simply to do something stupid, (as if we ever really need an excuse).
Aaron answered the call and made it an evening’s event;

“Hey Stevil,
Being one who is not usually inclined to take part in online contests, is difficult to motivate, and has about equal levels of training in both the beer and bikes department, the idea from Angel just seemed too good to pass up. After contacting two other members of our cycling(drinking) team who are usually up for any sort of shenanigans that involve bikes, beer, and especially the two together, it was decided that this event would take place on Monday. Keeping in mind that Sean had never been on rollers before that day, it was going to be an entertaining event.

After a 20 minute, 4 or 5 fall learning curve, Sean seemed to have it down enough to at least give it a good effort. It’s at this time that it seemed like a good idea to first stuff our guts with chili brats in preparation for the grueling event that was about to take place. A little gastrointestinal discomfort is fun, but doubling down with a pre-game meal like this was too tempting.

It was decided I would be the first to set the bar. Being that an exact 1 oz shot glass was not used, the measurement of beer intake was a bit off, and for scientific purposes it should be noted that 6er was more finished than not finished by the end of the 30 minute push.

When all was said and done, the urge to vomit really only showed itself for the last 4 minutes or so. The trusty ol’ cyclocomputer informed me of a 13.11 mile distance covered. My 13-year-old-girl-sized-legs had done their job.

Sean was up. We decided to take a bit of a liberty with the rules for him since it was his virginal roller ride. He would have 5 seconds to drink half a beer before he started, then stop every 6 minutes to repeat the process. The first half went down in 3 seconds, as did the 2nd at the first 6 minute interval. After the 2nd half, the fear of falling had left his system, and with the bravado of a racer who flips off his doubters after a victory, Sean decided he was ready to graduate to the shots every minute without stopping.

For the next 24 minutes with steady hands, he managed to get every shot down and stay upright. The urge to taste the previously drank beer for a second time proved to show its face the last few minutes for him as well, but he would not fall victim to the enemy. He chalked up a distance of 12.37.

Probably one of the best competitions ever, and here’s to it gaining as much momentum as Goldsprints in the near future! Thanks to Angel for the idea!
P.S. A link to my Flickr for all your photographic evidence/entertainment, in mostly-chronological order.
Keep on, keep… Truckin’
Aaron”

For their efforts I will try and get a second copy of the book, but assuming that this might be a difficult task, they will just have to tear the one copy I do have in half and share it equally.

Secondly, pinning J.P.H.N.H. down these days has proven to be a bit of a task as he is always off flouncing to one spot or another. I will make it my commitment to get him cornered if only for a moment to get his chicken scratch down.

Again, I realize that this one was pretty much a gimme, so at some point in the future we will try it again, but with bigger bottles containing a far more potent substance.
At least potent enough to kill a stomach parasite.

This of course brings to mind a story. Very few things in my life don’t, but you can always guarantee that a topic such as this will.

Years ago my friend Dave had put himself on that lemon, honey and cayenne pepper cleanse. Things were going smoothly until one day as he was going about his morning constitution, a long and particularly wide curiosity came ejecting out from within the confines of his bad hole.

Obviously this panicked Dave, but at the time, he thought that he had profoundly prolapsed his anus. Carefully he wrapped up the precious cargo (while it was still attached) in a wad of toilet paper, donned some bicycle shorts and called 911. As he relayed the story to me his primary hope was that the attending EMT wasn’t an attractive woman, which naturally it was.

Eventually they made their way to the hospital and a doctor came in to see Dave. As he unwrapped his ‘intestine’ from its protective swaddling, he of course was humored to find that Dave had not actually turned himself inside out, but rather began the process of shedding his unwanted visitor. He was hungry and Dave wasn’t giving him what he wanted, so he was headed South for the winter. Naturally the attending physician thought this was hilarious, and so began a parade of various medical personnel, like pilgrims to a likeness of Jesus in a tree stump, to bear witness to the boy and his worm.

In comparison, my life’s most embarrassing moment absolutely pales.

The moral of this story is to always burn the hell out of any type of meat substance you cook.

And this concludes today’s life lesson.

Now that we have gotten this out of the way, I will finish today’s post with four final points for your approval.

The first of the points is that Andy from Fyxomatosis has conjured up a sale of sorts for any and all who care;

“I’m having a ‘who needs two kidneys anyway’ sale all May long.
Promo code is ‘ahtbm’ and it gives your followers 20% off everything.“

Now that is mighty white of Andy, and should you find yourself in need of anything from a photo of a beautiful bike along side an equally attractive lady to a set of your very own Campy track hubs, there is no time like the present.

Point two is that 6’7″ doesn’t care if he rides on the road during a road ride or not; 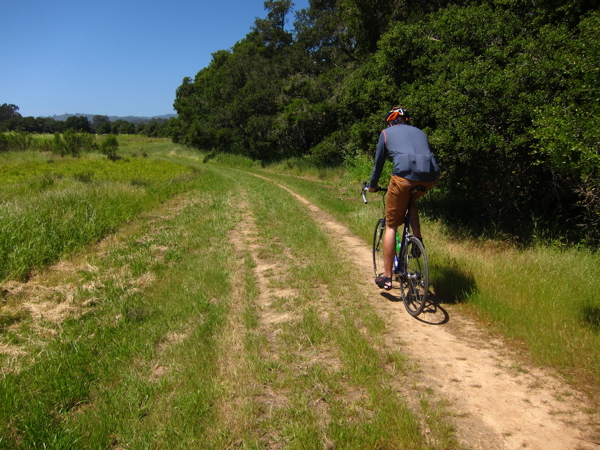 Point three is that my Mission Workshop Vandal is very nearly capable of carrying more that I am physically able;

And point four is that The Bike Snob will always be the one to put the package in ‘care package’;

I guess it’s a cop, but I like to think of him as a Nazi guard.
Lastly, due to a few emails I’ve received, I want to clarify that my pseudo review of his new book was in jest. (Except for the part that I used a spoke card as a book mark. I don’t kid about such things.)

I don’t know how anyone could have taken me saying that he should have thanked the ‘Car Talk’ guys, that I truly believe him to be a pawn of The Man, or that I’m committed to eating out of dumpsters seriously, but some did, and so here I am to set the record straight.

Personally, I am of the opinion that he indeed has knocked it out of the park, and even if I wasn’t making a 65% commission on all of the copies sold, I would still whole heartedly recommend everyone read it. He makes some profoundly astute points, particularly concerning the increasingly strained dynamic between cyclists and motorists that in some cases, while fairly obvious, have never been broken down in such a succinct form.
Besides the fine craft of wearing big shoes and drinking malt liquor, one thing I learned in art school was to be constructively critical of that which was set before me. If I didn’t like it, you can bet that I would be honest about it, and if there was any fluff that I thought to be irrelevant, I would pick it apart mercilessly.

The fact of the matter is, I think the book is brilliant and anyone who is reluctant should at the very least simply borrow a copy and decide for themselves.
I hope this has helped to un-bunch some panties.
At this juncture, I bid you all a fine weekend, and many happy Reruns.

14 Responses to “Fridays are for the union of beautiful people.”