The Giant Drunk Russian sent this clip to me with a note that simply stated “How Arizona disposes of rich white kids…”
It’s just a dry run before they invite all immigrant looking individuals in for a swim.
Alright.. So what do we have on deck for today? By the looks of things, a slew of profoundly non-related items, so what better time to engage than now?
As long as we have broached the topic of things that eat other things alive, on Monday I mentioned the book ‘A Long, Slow Screw’ by Eugene Robinson (though at the risk of getting my face and my ass exchanged for one another, I would like to point out that the cover of the book depicts not a screw, but rather, a lag bolt). While I quite enjoyed reading his prose, I should probably mention that my most favorite thing that he’s ever written was this bit that originally appeared either in Vice Magazine, or a local independent paper called The Guardian. I can’t remember which mainly due to the fact that when I was younger, I was surrounded by people who did drugs.
The article in question was called The Vice Guide To Getting Beaten Up, and has served me well, particularly when faced with the unpleasantness of an enraged female.
I fancy myself as a lover, rather than a fighter, though a few times in my days on earth I’ve wound up having to make the decision of either getting beat up, or doing the beating, though almost without exception I have always been able to use my finely honed reasoning skills. One time in particular, which still to this day perplexes me, I was at a warehouse party, and as I began making my way up stairs, I didn’t want to walk between two particularly rough looking individuals, and risk interrupting their conversation. I attempted to squeeze behind one of them, which seemed to piss them off even more, as they forced me to walk between them.
Some words were exchanged, and as I finally got past, I stepped on a beer cup that ultimately was propelled from beneath my foot, bouncing off of the leg of the more menacing looking of the two. He called me out and gave me a choice. Either I arm wrestle him, or I fight him, neither of which I wanted to do. I took note of the tear drop tattooed next to his left eye, as well as an assortment of random facial scars, (two physical traits you avoid when engaging in battle are cauliflower ears and facial scars) and began my golden reasoning. The funny thing about logic is when it’s applied towards someone who very obviously has frontal lobe damage, you might as well be reciting poetry in a foreign tongue. 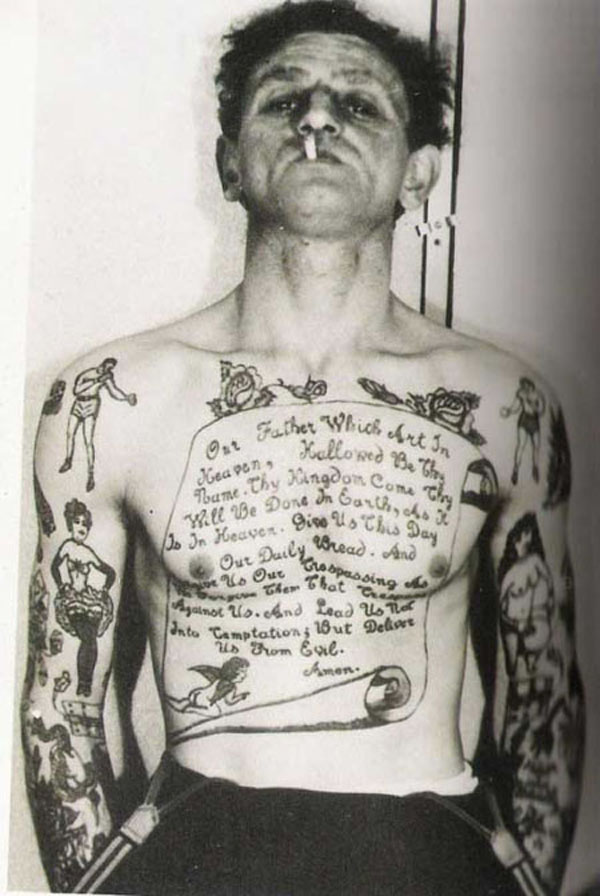 Though this obviously ins’t an image of the man in question, I wouldn’t mess with him either.
He wasn’t backing down, and as soon as a fight seemed to be my only escape, he suddenly, and mysteriously opted for the arm wrestling. Feeling as though he was toying with his prey, and still reluctant, I assumed this would end with a shiv in my leg. I took the opportunity, and beat him deftly. Suddenly a smile spread across his toothless mouth and he extended an aggressively offered hand in congratulations.

Again, not an image from the scenario in question, but I had to post this cause Mr. T’s Snickers bandolier is just too sweet.
There was never any doubt in my mind that had this confrontation escalated to a violent head, I would have lost, though even if I had won, he would have still been an agro creep..
Therein lies my standing rule on fighting. Whether it be in a bar, or the middle of traffic, if some meathead is committed to a confrontation, no matter who wins, they will most likely continue to be a jerk. No matter how hard I’ve tried, I’ve never successfully beat the asshole out of someone, so to that end, it’s a fruitless battle.
One that I will continue to avoid at all costs.
That is of course unless I can’t.
In other news of the conscious-streaming, with the literal downpour of words that I have somehow managed to muster these last few years, I feel as though I’m being left behind in the world of publishing. It seems you can’t swing a cat these days without hitting a dozen books that have been created, or at least inspired by what initially was a weblog. Never one to be left behind, I want to get in on that bandwagon, and fortunately Brado sent me a graph that will get me on the fast track to having my own book as well;

Armed with this, I too should have a book published in no time.
Now I should take a second and cover a bit of business. Lately I have received a few emails inquiring as to when the kits are arriving. Remember the kits? Those are the things that I spoke of at least fifteen times a week for about six weeks straight until I placed the order.
In just about each of those mentions, I included that according to Voler, they should be touching down the first week of June. If I hear anything different, it will definitely be mentioned here, and until that day happens, let’s continue to look to the original landing date..
Now that I have covered this, I should also mention that if I get one more email from someone asking when the kits get here, I will publish the offender’s home address along with a declaration that because of them, every kit will be shipped out only after I’ve worn it for no fewer than thirty minutes in a sauna, after feasting on a banquet of elephant garlic, malt liquor and methamphetamine..
My parents always said it was because of my patience, I would have made an excellent teacher.
There is another who has been keeping his nose to the kit grindstone, and that is Matt from Ghostship Clothing
“Hi Stevil,
I just posted up a pre-order for the Ghostship custom kits. I wound up having to go through Champ-Sys (shame on me, i know, i know). I guess that everyone here on the East Coast is super cheap and doesn’t want to lay the duckets out for nice clothing. Oh well. Maybe next go-round I can do something nicer. If you have the space and time for it, do you think you might be able to throw me a quick plug please? If it conflicts with anything, you don’t have time or just plain don’t want to, it’s totally cool, no problem.

I’ve just got sick again last week and am beginning to wonder if I have allergies or something. I’m usually only due for 2 head colds per yer, one in the fall/winter, one in the Spring. So far I’ve hit my quota so hopefully the rest of the year is smooth sailing. Figures when I get a new bike, it rains like hell and I get sick. More time to draw I guess. Hope all is well out your way. Take it ease.
Matt”
If I can help even one single cyclist to not dress like a clown, then this effort is the least I could do.
Again, if he happens to post something on his site in the interim, the official order form can be found here.
Casey of Snake Hawk as well as Drunk Cyclist sent an email to me to prove that besides making babies, growing moustaches, manicuring a magnificent chest of hair and getting his art on, that he too, occasionally rides a bike;
“so i rode. see? proof is in the putting”;

Never let it be said that nestled in the dark recesses of his heart, a love of two wheels doesn’t exist.
Angel, who was the winner of the contest to come up with a contest sent in an email with some words of insight;
“I am stoked that my idea for the contest to win a contest was selected as the contest to be carried out in order to win the book contest. I would have contested to win the contest myself, but unfortunately I have been away overseas, 1000’s of miles from my bike and rollers. It is probably best that I don’t participate in my own contest though, as winning one’s own contest could be contested against by the other contestants.
Anyone who gets a DUI on rollers should automatically win. They’ll need the reading material with them anyways as they spend the night in jail…and if they don’t like reading, they could always use the book as a cover for their poop chute.”

With a name like Angel, I expected him to have a far more cherubic look to him, so after seeing this image I wrote back to him asking if on this day in particular, he’d decided to dress up as a terrorist, dressed up as a bike racer. He responded in kind;
“I did, I raced as Osama bin Cyclocross. In the airports I dress like…like a terrorist dressed as a person getting asked a bunch of stupid questions by TSA.”
Apparently I’ve dressed the same way nearly every time I’ve entered an airport since I was 18.
Hey, you know.. In news of the recent flooding in Nashville I would like to say to keep our friends there in mind during this time, (not to mention the people who are still struggling in the aftermath of Hurricane Katrina) but also for people in Iceland, and Haiti, and Chile, and those digging out after the devastating earthquake two weeks ago in the Chinese province of Qinghai. Is it me, or do things just seem extraordinarily buggered up the last month of so?

I’m afraid even Dennis Quaid AND John Cusack can’t help us now..
It is at this point that I bid you all a fine middle-of-the-week and wish you happy fishing.
Or at the very least, happy fighting.

8 Responses to “Nothing ruins a party like some prehistoric gold fish or a thug with tattoos on his face.”