In reference to the major league B.S. occurring in Vail that I mentioned on Saturday, I have come up with slews of news relating to D.A. Mark Hurlbert.

Now, Mr. Hurlburt seems to be a dickish sort of world class levels, based on a professional history that has been laughable at best, and dangerously negligent at worst.
No doubt most of you remember the fiasco at the Leadville 100 last year in which two female competitors had federal charges filed upon them for the heinous crime of transferring race registration material from one competitor who was injured, to her friend who was not.
These two cases might seem outlandish, and you’re right. They are.
However they don’t scratch the surface of Hurlburt’s role in the insanity of two years prior. The case to which I am referring was the one that will forever be known as Snowballgate.
The fact that this man hasn’t been laughed out of office is a mystery to me, but then again, Sarah Palin has her own reality show, which just goes to show that I overestimated our society and that which used to be known as ‘common sense’ and ‘logic’ again.
That aside, in amongst this insanity there is a tiny beacon of hope in the form of a petition. It might not seem like much, but if Hurlburt sees that the world is paying attention to his flawed and destructive actions, chances are good that he will crumble to public pressure, just as he did before, and together we can squelch his directive that ultimately offers any of us nary a hint of protection.
Sign the petition, and let us hope that District Attorney Hurlburt will soon be run out of town on a rail.
In more positive news of bikes, and bike related whatnot, Jeff Frane, (who I believe Knucklehead Zito once referred to as ‘the biggest fakenger in Minneapolis’, until he squared off against the best, and clean smacked the Minnesota nice off of everybody in the 2010 Stuporbowl), got in touch with me a few weeks ago and asked about getting an All City ad on the site.
Not having any relation to the company, aside from a longstanding appreciation of their wares, we made some deals, the upshot of which was a brand new Nature Boy that is now sitting about twelve steps below me;

When this bike first debuted at Frostbike, (at least that was where I had first seen it), it touched me in a way that I previously had thought a production bike could not.
However, upon its arrival to my doorstep, I was quietly skeptical at every turn.
“I’m going to have to swap this out, and that out, and the other thing out…”
For you see, I am a snob of nearly the highest caliber. I only use after market components that have been machined using Paul’s blood as cutting fluid, and likewise, I need at least many dozen hours invested into each of my frame sets.
Mind you, I say ‘nearly’. I don’t have Dugast sew ups, carbon doodads, or Dura Ace anything. I’m basically the equivalent of a tunnel dwelling hobo who insists on drinking only top shelf hairspray..
So when a production bike showed up, (my first in fifteen years, mind you) a little voice was telling me that I would be disappointed. Upon finally completing the build, and throwing a leg over it for the first time, I was immediately overwhelmed with a warm and surprising feeling of adoration. I’m not supposed to have this feeling for a production bike.. What the hell is going on here?
The thing that I didn’t expect is that the more I interact with the bike, the more I like it. As it turns out, some of the details I had initially overlooked were the ones that made the greatest impression on me.
For example, the chain tensioner design, and the fact that it comes stock with a KMC chain is awesome. I love that like I love home made macaroni and cheese, which is a lot;

The Tektro brakes I assumed would be garbage and in need of replacement. I was miserably wrong there as well; 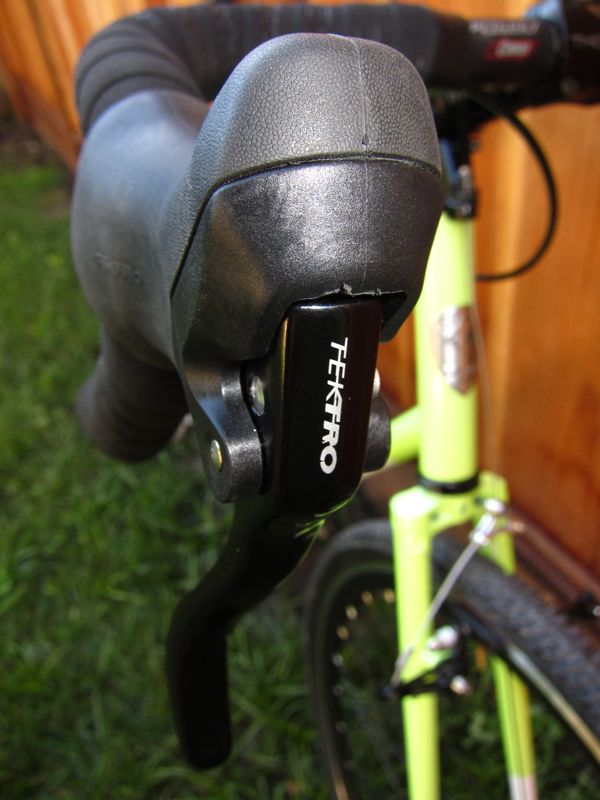 As a matter of fact, the design of the brake levers and hoods are so impressive, that I plan on purchasing another set for my Circle A.
At the end of the day, the only parts I ended up swapping out were the stem and bars;

Luckily at Saturday’s swap, I stole a pair of my very most favorite (and of course discontinued) Ritchey bars from Rick.
And of course the saddle and seat post, because what would one of my bikes be without the two?

So there you have it. My initial attraction to the bike was replaced by an assumption, which was ultimately replaced once again by attraction.
…Besides- we all know what they say about assumptions.
A group of people who literally put the ‘ass’ into assumption, and then throw the rest of the word into the garbage is Minneapolis West’s own Ironclad team. This is a group of people who get ‘hate’ and ‘love’ confused on a regular basis.. A group who are as godless as they are attractive. And ultimately, a group who has recently put themselves to film;

It is a documantary for the ages, to be sure.
Secondly, I’m not ashamed to say that I have done some bad things in that house, but none of them compare to what Captain Dave does there before breakfast.
Speaking of films, and bikes, and films about bikes, movie maker and photographer supreme, Brian Vernor is having a Bay Area debut of his new effort, ‘The Cyclocross Meeting’ at this weekend’s Bicycle Film Festival, the details for which Brian emailed me about thusly;
“The Cyclocross Meeting is showing on Sunday, at 7pm. Roots or Orchis, who did a bunch of the soundtrack, is playing a short set before the film, with pictorial accompaniment in the form of old and uncut super 8 and 16mm film I’ve shot over the years. Most of this film was shot in Belgium in 2006, and at US cx nats in Providence, RI.
Party,
BV”

I’ve seen the film in question, and aside from Adam McGrath’s ridiculous declaration when describing cross bikes that they “are more or less built for one purpose. (They’re) not really a road bike.. It’s a terrible mountain bike. It’s got one purpose”, I give this movie a solid six hundred and sixty six thumbs up. Should you be in a close proximity to San Francisco’s Mission District this Sunday, or anywhere that this film is showing, do yourself a favor and slide in for it.
In closing, I have to make mention that the Soulcraft Bicycles 2011 team kits are now available for ordering.
What does this mean to you? Captain Guapo explains;
“Stevil,
We’ve just opened up the ordering for the 2011 Soulcraft Kits. We tweaked the jersey design a little this year to, “fully empower our brand stakeholders in their quest for bleeding edge, cross-platform, transformational, and feature rich garments that optimize customized paradigms and seize strategic functionalities.”

Plus we put the AHTBM logo on the collar. Our friends at Voler will be making them and you’ve got all kinds of choices; jersey cut, chamois upgrade, wind or thermal vests, etc, etc. To sweeten the deal, all Soulcraft clothing is 15% off this month. You have until Nov 30th to get your order in or it’s wait until next year.
El Pirate Mas Guapo”
That’s right. You can get the slammingly handsome Soulcraft team goods, and fly the AHTBM flag at the same time. How badass is that?
From my perspective, pretty bad ass.
Alrighty then folks. That’s it from me. As much as I would like to button up today’s post with a clever reference to its start, I cannot for the life of me figure out a concise way to do it.
Mention tarring and feathering? No, that’s no good.
Make a connection between Soulcraft’s kit order and Vail? Nope.. Impossible.
Simply say that Mark Hurlbert is a dickhead of bionic proportions and previously unattained levels?
You know, it’s low hanging fruit to resort to name calling, but when the fruit fits..

11 Responses to “Madness rhyming with radness.”