I was shocked. Within a matter of hours I had a nearly perfect score sent to me for Monday’s quiz from Jason. This tells me two things. My queries were too easy, and Jason has too much time on his hands.
That said, I have re-posted the test, with Jason’s answers and in the rare instance that he was wrong, the correct answer along side of it. Scan though and see how you faired.
Or dont.
I don’t really care.

This is what I imagined Jason’s response was to finding out that he had passed the test, though it is as of yet unconfirmed whether or not there was a fat man picking his nose behind him at the time.

Jason said “being a badass”. This is entirely incorrect, but he is petty good at trials;

2) Whose ankle is this, and how did it end up looking that way?
Jason’s response was “Matthew was swinging on a vine”, which was pretty much correct, though it wasn’t by his own doing.

4) What use did I find for the little tag on the chest of my Swobo Campy polo shirt?
Answer- “you can hang an emergency snack”. Yes. I hung a bag of carrots from it.

5) Who is this and what did he affectionately refer to his cast as?
Answer- Chopper with his “black tambourine”

6) What illicit goings on transpire within the confines of this warehouse?
Answer- “Spooky Bikes”

7) Using the following image as an example, what was I hopeful that manufacturers would do at that particular year’s Interbike show;
Answer- “Using bimbos to promote their products.” It was that I’d hoped they would focus on creative product over trampy booth garnish.

8) Why does this even exist?
Answer- “For glitz.” Yeah, I guess so, though I really don’t think it should exist at all.

Before Red Bull had their Minidrome, and PDW was in possession of the Circulus, there existed this;

9) Who owns the block of dirt where this is constructed?
Answer- “Ground Up Bikes (dizzydrome)”
10) Who is the single person that I claimed could possibly understand how mild mannered frame builder Christopher Igleheart pictured here;

Could be friends with the generally aggravating Loudass, pictured here;
Answer- “Opposites Attract” Almost. It was Paula Abdul, and I linked her video ‘Opposites Attract.’

11) Who are all of these people excited to see?
Answer- “The Dwarves.”

12) What was cycling süperstar Jonny Sundt’s reaction when I taught him my patented ‘Portland Highfive’?
Answer- “You just date raped a hi 5 out of me.”

13) The person in the following image is;
Jason said B, though the actual answer is D, my web guy.

A. A random individual found on the street which I happened to be lucky enough to snap a photo of.
B. A younger and much more hopeful me.
C. The former security guy from the Gilman Street Project.
D. My web guy.
E. J.P.H.N.H’s intern.
14) Who sent me this kindly invitation;
Answer- “Andy from Surly.”

15) What is the title of my forthcoming album of smooth jazz hits?
Answer- “If My Arms Had A Baby, It Would Be You.”
16) According to the wall chart in the Specialized Bicycles World Headquarter’s bathroom, what color is your urine when you should seek medical attention?
Answer- “Brown like “syrup”
17) Who is this man?
Answer- “The “DREAM” man.“

18) Who made the bold claim that “milk chocolate is the poor man’s meth”?
Answer- “Alan Van Zarembo”
19) Which celebrity did I mention that Bay Area fixture Warpath resembled a ‘tore back’ version of? Answer- “Justin Bieber” 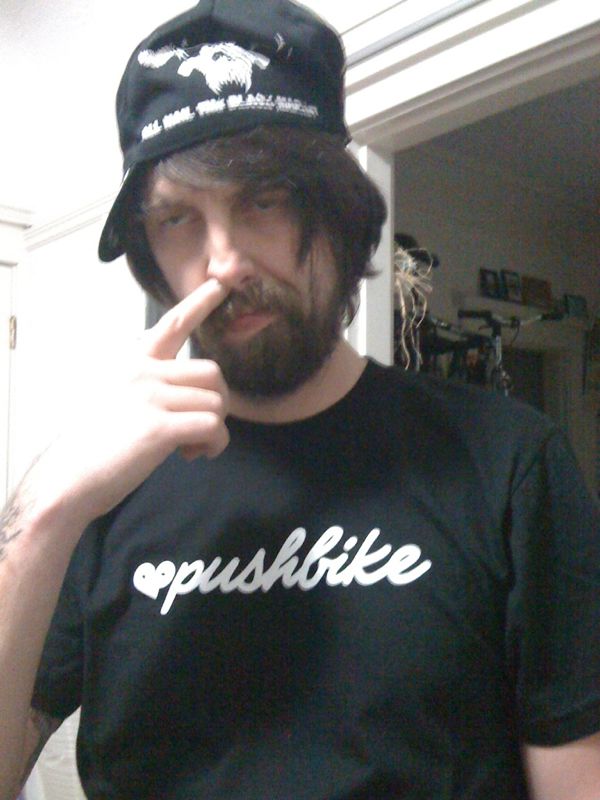 20) Which professional cycling team did I send my race resume to? Answer- “Team Budvar”
*BONUS QUESTION* On the Dank Bags website how many of Corndog’s models are wearing Panasonic cycling caps? Jason said zero, but in fact, there is one model wearing a Panasonic hat on the Dank Bags site in the Backpacks gallery.
Shit. At the 11th hour, I got another set of answers, this one being even more spot on than Jason’s, from a fellow named Josh;
“Well Stevil,
I was sure that my master’s degree in art history (from an Ag school of course) had adequately prepared me for the sort of research needed to complete this quiz, but I suspect I’ve come up a little short. It was fun revisiting things and checking out the posts I missed the first time around. Stop by the next time you are in Richmond (VIRGINIA), we’ve got mad cute animals in the house and truly great single track just minutes from the back door…
Josh RVA
1. Wizard shirt:
young sir is proficient at riding a trials bike in an urban freestyle manner (1/13/10).
2. Ankle:
I believe that is “Matthew’s” ankle, and he seems to have come into harm’s way by hanging out with you and GenO (11/25/09).
3. Jerry Only:
is signing a 7-Up jersey (also 11/25/09).
4. Swobo tag:
you found it useful for hanging a bag of carrots (8/20/10).
5. Forearm cast:
belongs to “Chopper of Bike Magazine fame,” and he calls it the “black tambourine” (also 8/20/10).
6. Warehouse:
Er… Mission Workshop? I swear I remember that episode.
7. Interbike:
You were hoping that “manufacturers would rely on their own designs and concentrate on making a quality product and presentation above filling their booths with hired talent who, if when touched, would retain a dent” (9/27/09).
8. Stupid NAHBS “seat:”
This exists to justly separate anyone stupid enough to buy it from their “pants yabbies.” I actually had to gaze upon that thing in person last year (4/13/10).
9. Dirt track:
That would be the “Dizzydrome” located at the “top secret compound of Ground Up Bicycles” (4/28/10).
10. Igleheart/Loudass:
Paula Abdul (9/7/09).
11. Mystery band:
Er… Dwarves?
12. Jonny Sundt’s reaction:
“You just date raped a high 5 out of me” (9/27/10).
13. Street hurler:
Some dude with initials “cc”
14. Kind invitation:
Andy from Surly (4/15/2010).
15. Smooth Jazz:
“If my arms had a baby, it would be you” (9/3/10).
16. Specialized urine:
looking like syrup is a bad sign. Type and grade not specified (12/10/10).
17. Mystery man:
some dude that supposedly appears in dreams, or maybe your middle school science teacher (9/29/09).
18. Milk chocolate as meth
Ritte team rider Alan Van Zarembo made the comparison (1/4/10).
19. Martin…
looks like a really tore back Justin Bieber (12/29/10).
20. Race resume:
Team Budvar (3/29/10)”
Except for number 3 and 6, he nailed it. (Often overshadowed by the 7-11 team was the long suffering 7 Up team.) That is what we in the business of education call an A on a curve, or a B with several smiley faces next to it.. As I told Josh, the bummer part is that I already sent Jason his hairnet.
The non-bummer part is that I had Cory make me two.
A box of goods, including the hairnet helmets have been shipped to Josh and Jason, and it is with that that I wish them sincere congratulations, and a plea to stop paying such close attention to this drivel.