Before we get into the bulk of today’s post, and what its title is alluding to, just so you all don’t think I’m a one trick pony (technically I’m a two and a half trick pony, if you count this website, and the fact that I can do the punk rock party trick, ala Alva Skateboard’s Fred Smith) I have recently been published again in the second issue of Paved Magazine.

Luckily Brian Vernor has a number of fetching images contained in said issue as well which makes my scrawl almost seem valid. He’s also completed this video teaser with which to give folks an idea of what’s in store;

I told him that upon closing the magazine I thought he should have smashed a jelly donut on it, to act as a sort of period to that sentence.
He never got back with me.
Unfortunately however, my HTC/Highroad piece ended up not making the cut. This makes me sad for a number of reasons, one of which is simply because I have never typed that many words before.
I asked JPHNH about my masterpiece’s exclusion, to which he responded with something like “Yeah, I got it. I’m totally gonna do something with it. Oh, hang on.. I have a call on the oth….”*click*
We’ll have to wait and see if the article is released sometime before the HTC team completes their contract with Specialized and goes back to Scott.
You wanna talk about tools for a second? The tools that I’m talking about are not those (with the exception of AZ, mind you) displayed in full color, complete with rockin’ soundtrack on Monday’s post. No, good people. The tools to which I am referring are the kind that one maintains their bicycles with.
Recently while I was working on one of my bikes (i.e. gazing menacingly at it until it worked better) I was reflecting on the post in which I listed favorite accessories that have since been done away with. It occurred to me as I peeled a nearly bald tire tire off of the rim, I have a standard set of go-to tools, which seem to have been tailor made for my very own hands.
The first I have in the queue is the PDW coated 3wrencho;

The 3wrencho is the first thing I reach for when removing a tire, as unlike any of it’s plain plastic counterparts, doesn’t flex in the least during the process. Of course it’s got the 15 mm wrench on the opposite side, which never hurt nobody, but it’s really the tire lever that makes me love this unit long time.
And speaking of 15 mm wrenches, I couldn’t very well compile a list without the inclusion of a Campagnolo peanut butter wrench;

I long carried a knock off of this wrench which along with my liver and remaining self respect, was ultimately lost during the 2000 Single Speed World Championships in Minneapolis. Luckily I had the presence of mind to leave this jewel safely tucked away at home… In a jar of peanut butter, natch.
This next one is elementary and generally kind of obvious. When I was in college a friend’s mom gave him this for Christmas. Apparently he didn’t care for it, as it ultimately ended up being re-gifted to me;

This is the kind of item you find in a $1.99 box at the local hardware store, but ultimately takes the place of eight different screwdrivers. The crack extending down the body occurred while I was removing a fork race, so as long as you don’t do that with it, you’re good to go.
Appropriately, in the fourth spot is the Hozan fourth hand;

I was never sure why this was called the fourth hand. Personally I only have two and this acts as my third. I suppose if you get down to the nitty gritty, this pinches as well as pulls, so perhaps it would be more appropriately called ‘the third and fourth hand’, but just so there’s no confusion, well simply call it by it’s traditional name, a cable puller.
When I was but a wee lad living in Denver with Pentabike Dave and Mark Dickerson, I was first introduced to the majesty of its uses. It was then that I knew I was destined to be a mediocre mechanic, with a profound love for this tool.
The next one’s array of applications is endless, which is surprising, as it’s as inelaborate as they come. What is simply a sharpened spoke, or as a wrench I used to work with referred to as his ‘special pokey friend’, falls in at number five;

It can tackle every chore from opening the end of a piece of clipped housing to marking where to cut on a fork steerer to picking a piece of beef jerky from your teeth and everything between. They’re cheap, easy to make (assuming you have a bench grinder) and an invaluable addition to one’s collection.
Hands down one of the most ingenious tools I have in my stash is the Shimano 535 pedal overhaul tool; 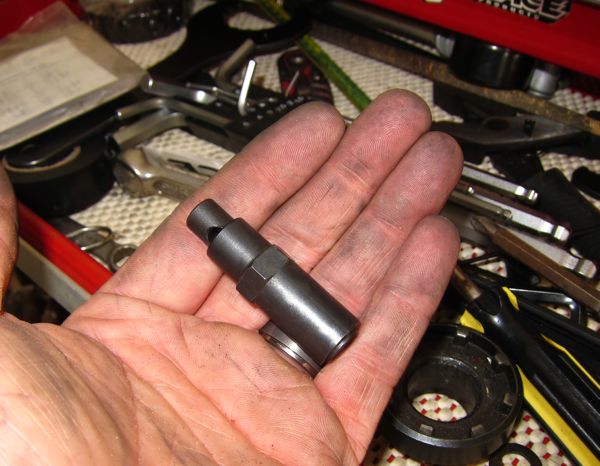 I first came across this in a shop that used to let me come in and monkey around on my stuff before I was eventually employed by one. The design of the pedal is such that one nut applies tension to the internal bearings and another nut locks that one in place, (both of which are threaded onto the pedal’s spindle) not unlike a cone and a locknut on a hub. The outer 10 mil wrench tightens the ‘cone’, and while holding that in place with a 15 mil open end wrench, the internal 8 mil wrench tightens the lock nut with the aid of a small philips screw driver inserted through the hole in the upper part of its body. Elegance and efficiency all rolled into one.
Then we have the newest addition to my collection- the Raceface (R.I.P.?) external bottom bracket bearing installer/extractor;

Brilliantly designed for its application, this tool makes quick work of any external BB overhauls, and considering I may no longer have access to their wares, will extend the life of my current collection considerably. It was recently observed by someone much smarter than I am that the production costs of this tool most likely far outweighed that of a new bottom bracket, which may have been one spot where Raceface ultimately failed. Whatever the case, I certainly enjoy having this in my collection and look forward to the next time I get to use it. Any crunchy external BBs can be sent to me directly.
Lastly, we have the ACS freewheel spanner, complete with custom spent tube grip;

The rough finish on this piece might lead one to believe it was produced in a shop consisting of several metal grinders and an array of hammers, but it works like a champ, and will ensure the skin on your knuckles stays where it belongs.
So there we have it.. Thus concluding my partially complete list of things I pretend to fix stuff with.
While the design and application of an array of tools such as these might be what separates us from our less than vertical walking counterparts, as proven by this link sent to me by Max, human beings, or more specifically ignorant Americans, are currently displaying the intellect and compassion only rivaled by that of the most simple of single celled organisms;

This is simultaneously heart breaking, dumbfounding and absolutely infuriating all at the same time.
Do any of these people know Jack Schitt? No, I don’t think they do.

To paraphrase the homeless fellow who lived behind one of the shops I used to work at- “arybody got ‘they (or in this case, be ‘they) own kind of tool.”

20 Responses to “Tools come in all shapes and sizes.”