“We’ll mingle with some people, have some drinks, unwind, and maybe burst into flames… You’ll love it.”

And what’s a party without a little more salt in the wound?
So if Wednesday’s bit about Michael Vick wasn’t enough to boil your blood, I have an email I received at the tip of 2011 from a person who will remain unnamed. I’ve sat on it for this long due to the fact I never really had anywhere to place it. Today seems like as good a time as any;
“Hey Brother,
-Thought you might find this enraging. A friend of mine has a client that was the lead federal investigator on the Vick case and not just Michael and it had nothing to do with dogs. Turns out Marcus, his brother, was the original target and it was all about drugs.
There was a connection with Marcus and a high level drug dealer in Miami. So big was this dealer that there was around the clock surveillance being conducted by the FBI. The Vick brothers were photographed in FLA on a boat with said King Pin. Then the feds set up surveillance in Va on Michael’s home and accidentally found the dog operation. Then that was used as a threat to convince big brother Vick (the one with the most to lose since Marcus had nothing going on at that point) to turn over on the King Pin.
So high up was the drug dealer that Vick took the 2 years for the dog thing, that the feds couldn’t care less about, rather that a death sentence from ratting out the King Pin.
It’s a thug life at Virginia Tech. As the Blacksburg Police Chief said, “everyone on this football team is just a knee injury away from prison.”
You might want to read that over a couple of times.
So I wonder.. Do you like apples?
How about them apples?
No accompanying photos to ruin your day, no requests to send a postcard with angry words on it to Corporate H.Q… Just the glaring truth that the fighting ring wasn’t even the primary focus. Had Vick rolled over on the King Pin, not you, me, or anyone else would have ever known that the dogs were even involved.
The fact that their discovery was an accident is the among the most offensive things of all.
Enough of this mumbo jumbo.. Let us move onto other, more positive matters.
Photographer Bob, who is one of this site’s like, seven readers in Florida sent a heads up for an upcoming event as well as a video clip, which I guess I need to warn you is filled with not only scary and gory stuff, but two Portuguese guys and a banana.
There is a bad word involved as well;
“Stevil,
One: I think you’ll like this;

Two: we’re having a 12 hour bike race here in St. Pete this Saturday. We’re hoping to make this an annual event of suffering and wizard staff’ing. At race time the temp should be about 90 or so degrees with a 50% chance of rain. Suffer, suffer, suffer… 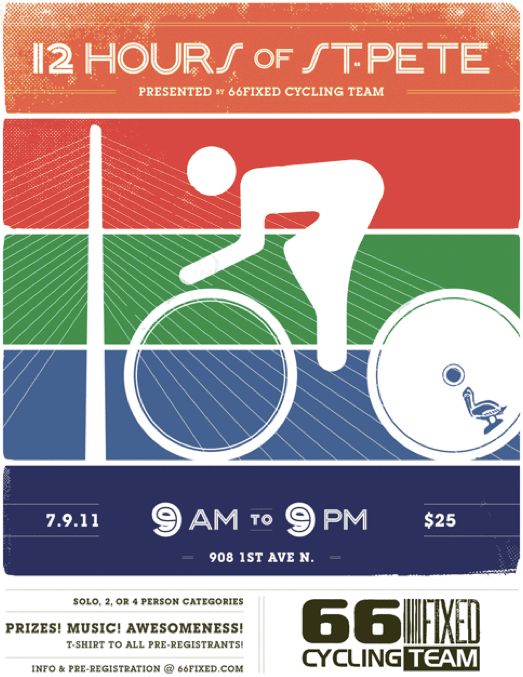 Here’s more info
We’d be honored if you’d mention it on your blog.
Cheers,
Bob”
So mark your calendars, St. Pete and surrounding areas.
To be honest though, my idea of suffering in Florida is not having an umbrella in my drink.
I’ve made mention of this at the head of the week, but this very evening is the big kick off in San Francisco, California of the Levi’s Commuter Line at Box Dog Bicycle Shoppe;

There will be fun, and surprises, and games and people with bicycle hats and at least one pair of Ben Davis, as I have yet to see any of said ‘draws, but you know what they say about pants;
“Some people have them, and some people don’t.”
Anyway, it will be a fun evening for all (except for that one person who will inevitably, at some point drop their keys down a storm drain, or get dumped, or walk into their house and pull the door open but their foot is in the way so the door will only open part way and then they’ll bang their face into it and maybe hurt their cheek, or even possibly all three).
In other news of bicycle related things and the beautiful people who love them, DWP from up in Minneapolis West way sent me a shout about a pretty cool new project he’s involved in. Even after a phone call to figure out what it is, I was still confused, but that really is not saying too much;
“Check this out, I gave birth to it from my body;
A Manual For Speed(dot)com

Do with what you will. If you think it’s lame, let people know, if you think it’s not lame let people know. If you think I’m lame, let people know, if you don’t think I’m lame……..so on and so forth.
DWP”
You might see a pinch of similarity between this and the aesthetic of a certain boutique brand who drives around in an old grey broom wagon. This is no accident you see, as DWP was long involved with the development and construction of their visual and written content. He has since moved on in other directions, and I’m glad to see his flair has not faded.
Finally in closing I would like to announce that I have finally taken delivery of the new AHTBM ‘Lucho’ caps for the budget minded.
You can get them in either red and white, but if you’re Swiss or Canadian, you should probably get one of each.;

If today is gonna be the kind of party where people spontaneously combust, I suppose I should also mention that just because the new caps are pretty sharp looking, it doesn’t mean they’re flame retardant.

5 Responses to “Ain’t no party like a Friday party.”