After re-reading Monday’s post later on in the day, I came to the conclusion that operating on auto-pilot is not a sport for an amateur like myself.

As it turns out, simply rolling my face back and fourth across the keyboard isn’t enough to adequately express the half baked ideas I have lollygagging around in my brain.
However, now that this past weekend’s fog has mostly cleared, and I’ve regained a marginal understanding of how to use punctuation, let’s get, on with; the show.
Up first I should probably extend my apologies to the good people at Levi’s. They had the good faith (and bad sense) to include me in their Commuter Series launch and I go and wind up with photos all over the internet of my compatriots and myself pouring beer on one another. That just wasn’t a very professional response.
Natural maybe, but not professional.
I would also like to mention that on behalf of All Hail The Black Market for my affront, I’ve decided to try to right my wrongs and donate what I will only say is a pretty good chunk of change to Bike Monkey Magazine and their efforts to help keep one of our endangered state parks from closing.
That’s what I’m taking about… Absolving my sins with cold, hard currency. That’s how millionaires, politicians and millionaire politicians roll, except in this case, it’s far less money.
Here is a bit which may or may not get your panties in a bunch that was forwarded me on from Andrew, via The Drunk Cyclist. It seems as though the bloated talking heads from ESPN’s ‘Around The Horn’ don’t care for cycling too much, nor can they contain their laughter about Stage Nine’s horrific crash;

-Which can be heard in this audio clip that starts at about thirteen minutes in.
Personally, I’m not at all surprised by this. It seems as though with each overwhelming display of insensitivity (ala Tony Kornheiser’s rant), resulting in a visit by Lance Armstrong and an on-air apology, five more spring up. I mean, if I didn’t know better, I would think that the public at large doesn’t much like the bikes, or the people who ride them.
I want to be accepted by ESPN, dammit. I want for pudgy guys in Dockers and Tommy Bahama shirts to appreciate what it is I do with my life, and rest assured, I will be writing several very sternly worded emails to the powers that be at ESPN, and I suggest you do as well.
ATH@espn.com
Whatever.
From my perspective, Johnny Hoogerland has secured his place in history as one of the baddest asses (no pun intended) on the planet, the guy who was driving the car will be blacklisted, American media will continue to plod along with their heads up there asses, and the sun will probably rise tomorrow. 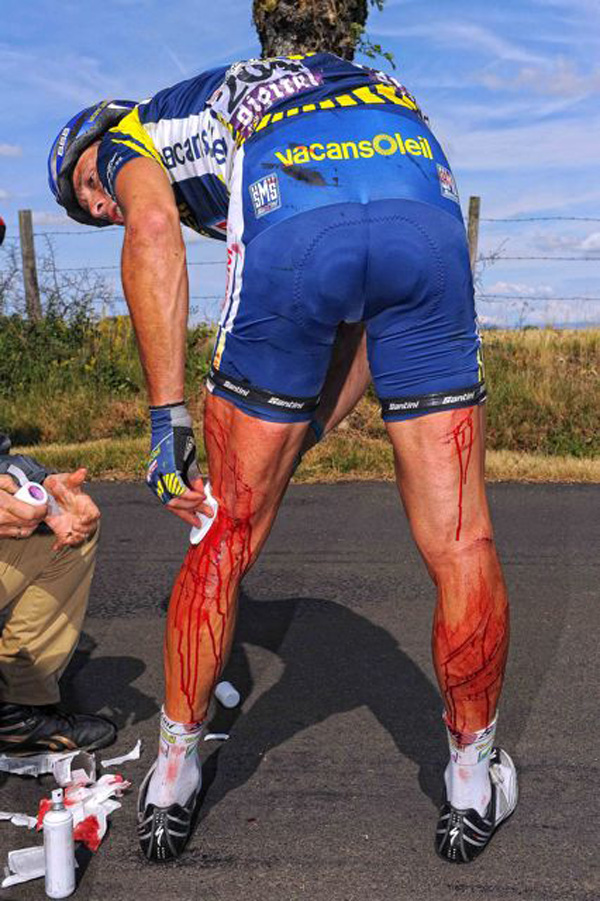 As someone who is far smarter than I am once said (and I paraphrase, because like I just expressed, I’m not very smart) “bicycles are a sensitive subject. You want to generate publicity for yourself, say something outlandish about them.”
Previous to all of this I’d never heard of ‘Around The Horn’, or Michael Smith, and now that I have, there’s a percentage of a percentage of my brain that can never be used for anything else except for remembering the names of ‘Around The Horn’ and Michael Smith. Agree with these clowns or not, but they have gained a considerable amount of publicity the last two days thanks to cyclists.
Did anyone want to see ‘The Last temptation Of Christ’ until you heard that it made Christians mad, or the Mr. Magoo movie until blind people began picketing the theaters?
It’s kinda like that, but not really, but kinda.
Anyway, I’m the one who wanted folks to notify Nike that they sucked balls for re-hiring Vick, so if you want to write an angry letter saying their newscasters, or more specifically, Michael Smith, I wholeheartedly support your right to do so.
Though it might be interesting to note that as of this time, all video content of Smith on the ESPN website has been taken down, so perhaps we’ve been beat to the punch.
Moving on in a direction that has nothing to do with that.. A person named Maggie got in touch, who besides being another woman that despite my best efforts is sticking around cycling, is also involved in some big doings on the Front Range;
“Stevil-
Wanted to give you a heads up that we are putting the final touches on the Barnum North Bike Park here in Denver and it will be ready to ride very soon. Slope style jumps, pump track(s), skills courses etc all built by the good folks up at Trestle. The park is located at 6th and Federal (a spit of land along 6th that was just weeds and grass before) and a crew of builders including John Cowan have been working hard on building it out over the last few weeks. It’s an amazing facility that sets a great example for work we want to do in other Denver parks (both urban and mountain).
So here’s the basics:
Barnum North Bike Park (Between 6th and 8th along Federal Blvd in Denver) Grand opening Saturday July 23 from 10-2 (come ready to ride) Park will be open normal park hours and free to ride from then on out.
We are hoping to get experienced riders down here on a regular basis to be good examples of etiquette and proper use.
Attached photos are of the course. One is the view from the bottom and the other is the “Cobra” and my motley crew of trail maintenance boys.

If you can help me get the word out it would be awesome.
Maggie”
It looks like it’s gonna be an excellent place for young people to get rad, and old people to get hurt.
With that observation, I think today we have brilliantly covered all bases and said everything that needed to be.
On a business front, it’s my duty to mention a shipment of small/medium Blackweiser socks that will be landing any minute now.
I can’t remember if it was the tornado in Birmingham that sent the production schedule off into the crapper, but whatever the case, things are back on track and it’s just a matter of time before the smaller footed among us will be looking both dashing and smashing;

Doing everything in my power to make sure your feet look as handsome as possible?
There’s nothing controversial about that.

13 Responses to ““Something controversial about cyclists”.”