The only reason I’ve thought to include this video is because there is a trolly in it.
And also because it’s awesome.

Anyhoo, time she is a-wasting, so let’s get on with matters at hand.
Martin sent on a notification for his shop, NYC Velo, regarding a little pre-cyclocross athletic pursuit season opener social function they are hosting; 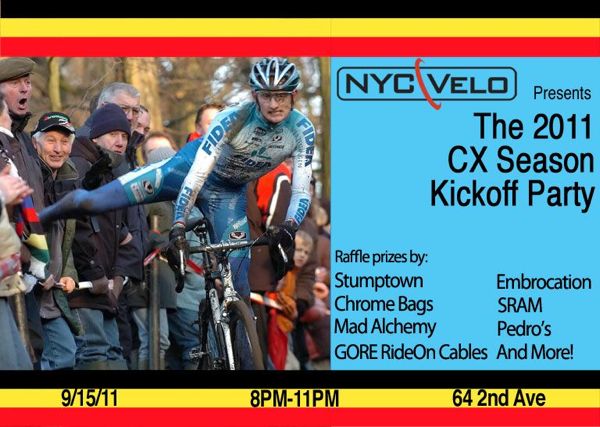 Go get your party on, then make like Bart Wellens and kick somebody in the stomach.
Then up there in Winnipeg, Matt comes through with a heads up regarding a different sort of cyclocross styled athletic pursuitist announcement;
“Hey Stevil –
Two years! Well played to you, Sir.
Dark Cross – cyclocross on the speedway track at night – in Winnipeg is go;

We’d all get a huge kick out of seeing it posted on AHTBM if space allows.
Best –
Matt”
If I didn’t know better, I would say it was winter time again.
My boy Reidy, (shown here in the best photo I’ve ever taken);

emailed me with even more information about the T.J./J.P showdown slated for this next week in Las Vegas;

As I said last year, I will not be attending Cross vegas, but rather will be across Vegas, far from the squalid stench of this dog and pony show.
Upon volunteering why I won’t be attending, I blacked out at my keyboard. When I came to, this was all that appeared on the screen before me;
“I’m not into the venue, I’m not into the politics, I’m not into them fencing it off, I’m not into the fact that it’s actually a points race, I’m not into them charging people for entry, I’m not into them not allowing outside beverages, I’m not into the fact that the riders aren’t into it but have to go because of point four.”
If I didnd’t know better, I would say that perhaps I wasn’t into it.
Once the dust has settled from all things Interbike, I get wind that Lukas also has a thing for which a flyer was made;
“Stevil,
I’ve been a long time reader and love the blog…
We are throwing a bit of a throw down here in Southern Utah, the likes of which have never happened before. We are trying to get a desperately needed mtb organization up and running and are having our kick off event the Friday after Interbike.

What the flyer doesn’t mention is the after party which will include a moonlit ride and social time (think beer) at the local shop. If you could give us a shout out, it would be awesomest.
Out.”
Are any Utahnians out there picking up what Lukas is laying down? These folks are doing the for the betterment of all of your bicycle related athletic pursuitings. Don’t let him down.
While all of this other nonsense is taking place, down in Houma, Louisiana (or up I guess, if you live South of there) Stu has the kettle bubbling in anticipation for his upcoming Swamp Thing alley cat race;

I doubt Stu’s getting much sleep as he prepares for this event, so you know it’s gonna be a good one. If you are in or around Houma, swing by as it promises to be a good time.
If you’re interested, more info can be found here.
Even further (farther?) away than any of these events (unless you live in Western Australia) is the High Roller’s Poker-Cat sponsored by many, including my total BFFs Thrones;

In closing, and because I think I’ve run out of flyers to post, Ben from Handsome Bicycles sent on an even better shot of their newly made, and freshly designed-by-Wakeman sealed bearing coaster brake hub, which will also eventually be available in black;

I don’t know when you can get them, nor do I know how much they will be. What I do know is that I will know next week. If that’s not soon enough, I suggest you go look at a bicycle related website or call them, or make it up yourself.
Speaking of next week, I will be departing to Las Vegas in the wee hours of Wednesday morning and may or may not get around to writing a new post for the hump day.
If I do, bully for all of us.
If I don’t, the world will keep turning. Remember to be like a muppet and just keep the rioting to a dull roar.

2 Responses to “Back on the trolly”