And that’s to say nothing of sitting in the parking lot at Anaheim Stadium.

If anyone knows the relevance of this image to today’s post title, you are old as well as in possession of a brain that contains both awesome and useless information.
Kicking things off, Charlie penned an ode to why his dad is tougher than yours;
“This my dad. He is the gnarliest person I know. If I had this much road rash on my face I would stay on the ground.

I would certainly not a) get up b) get back on my bike at 6:30am in the dark and cold c) ride to work d) unlock all the doors e) turn on all the lights so the kids can go to school. I would lay on the ground and cry like a girl. His modeling career may be on hold for a bit but his ass kicking career is going strong.”
Just reading that I found myself curled up on the floor and whimpering. Indeed Charlie is cut from some durable cloth.
On the other end of the spectrum is Yuri, who made contact regarding the contents of his closet;
“Stevil,
I hope this shot doesn’t scar your eyeballs, ruin your day, or make you think I’m flashing you my plumage in a not so veiled attempt on my part to hit on you……maybe it is though?
I wanted to let you know that My Alibi’s ladies bloomers are the perfect under garment for that discerning cross dressing cycling man in your life;

I have worn them at both SSWC ’08 and at this year’s SSCXWC, and can say that, with the exception of some minor coverage issues, they work great and are extremely comfortable.
Now, go wash out your eyes and have a great Friday!”
The objective here is to help My Alibi gain some traction. Not make anyone within shouting distance go scrambling off into the woods.
While I’m thinking about that particular locale… Last week I went into the post office to deliver an assortment of AHTBM goods into the awaiting hands of the local mail persons, and as I opened my wallet to retrieve their payment, a very sizable and dead tick fell out onto the counter. With my gloved hand, I poked at it and kinda pushed it around the surface while wondering how long he, she or it had been in there.
It was at this moment when I realized that, as far as the woods were concerned, I had been spending just the right amount of time there;

Hey you want to talk about presidential elections?
From my perspective, this is all that needs to be said; 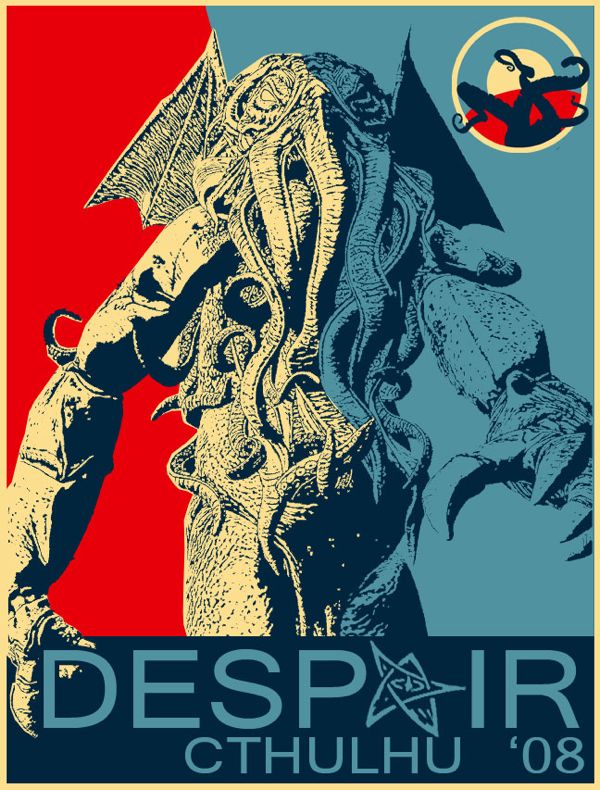 I can only hope he decides to throw his hat into the ring again this year.
And have you ever seen the Cthulhu’s hat? It’s huge.
If you’ve been reading this web long for any length of time, you know that I enjoy broaching the topic of politics from time to time. It’s an endlessly fascinating subject matter, especially when I get the opportunity to point out when a politician is a hypocritical scumbag, which is almost always.
A good case in point is an article I found recently regarding the SOPA issue.
As it turns out the author of the bill, one US Congressman (“and poor-toupee-color-chooser”) Lamar Smith is a dirty copyright violator.

Way to step in it, Lamar. I can only hope that this is the keystone to SOPA’s undoing.
In happier news, a crew of heathens descended on my home over the last two days and with them came the orange scourge which has occupied my attention for several weeks;

While some came by mini vans, others arrived by more unconventional means;

Like clowns in a car, we piled into my cramped garage space, taking turns turning wrenches while drinking beer and telling lies;

After tightening the final bolt, and storing all of the goods for the night, we all adjourned inside where we enjoyed a few more nightcaps and readied ourselves for whatever was to come.
The sun rose with a promise for another lovely winter day and soldiers began trickling out of their quarters. Eventually Mr. Blacksocks and Rick Hunter joined the fray and after some time, we rallied and finally got our acts together to get on the road.
Test riding a new bike has always been a little bit of an emotional challenge for me. My OCD takes over and I begin to obsess on every nuance that might be different from my other bike, or where that rattle is coming from or did I remember to close the front QR… Things of that nature. Right out of the gate, and I mean immediately, I felt as if this beaut was as tried and true a steed as any in my quiver.
Granted, Robert (the individual at Ventana Bicycles who built the frame) applied a couple of my measurements to the equation, but by and large, this is the exact same frame you would get should you call them and order one for yourself.
Ask most people and they would tell you that Bianchi had the first production one speed frame when they introduced their B.O.S.S. in 1998, but this would be an untruth. Ventana beat Bianchi to the punch by at least 730 days when they offered their El Toro to a small but enthusiastic audience.
The El Toro Bravo is every bit the bike that the El Toro was (my first proper one speed frame, natch) but with bigger wheels and updated bells and whistles. Robert often refers to the sensation of having a new bicycle in your life as having ‘new bike wood‘, which I suppose should be mentioned that is not specific to a gender. Keeping ‘new bike wood’ in mind, I would like to say that the El Toro Bravo absolutely has exploded my pants.
Metaphorically speaking.
Anyway, enough of that. Let’s look at some photos I took of some rad getting during it’s maiden voyage;

I’ve moved on from black bars and random male genitalia and now concentrate more on asses.

All of which of course concluded thusly;

It was a brilliant weekend with a group of friends who I have known for a combined total equalling considerably more than my entire life, on a bike, the mere thought of which makes me smile;

You can keep your Metallica t-shirt, and your little tiny, baby moustache.
Our Sammy Hagar weekend trumped all.

9 Responses to “It was a Sammy Hagar weekend.”