Really, what are bikecycle related action sports blogs but disguised advertising campaigns designed to part you from your hard earned income? 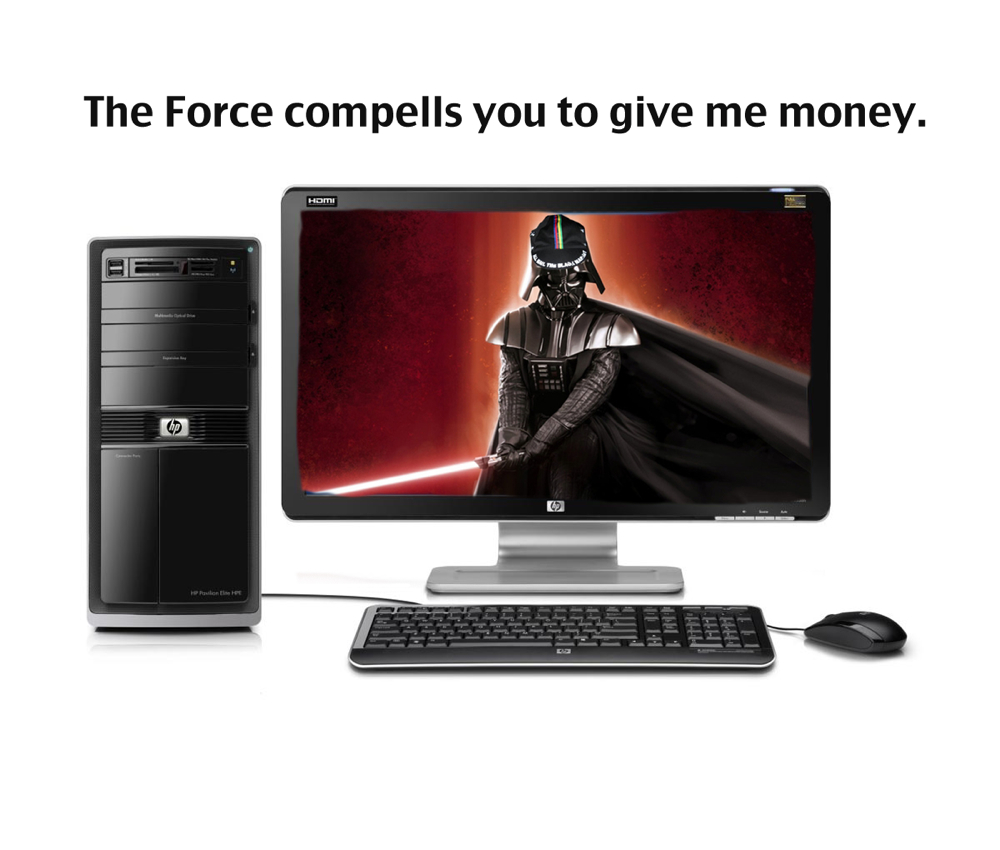 Certainly sometimes I might be given the opportunity to share with you my experiences with a product or a thing or an experience that in some rare instances has been gifted to me from the manufacturer, or provider of the product, thing or experience, and in these rare instances I am eternally grateful, because only crazy people don’t like free stuff.

Recently two manufacturers of dietary supplements contacted me and asked if I would be interested in trying some of their product, presumably so that I would write about it in an attempt to convince the readership into purchasing some for themselves. While I doubt my perspective would sway the readership one way or another, It still seems right to broach the subject of the products, if only to give thanks to said manufacturers. I seriously doubt anyone who reads these words is incapable of making up their own minds one way or another anyway.

That said, one offer came from a woman named Lisa employed by a company called Nutrition Fix. She asked me if I would be willing to try their product and give it some traction on this site. I said primarily I was interested in anything they made that could either make me look like the men on the site, could help me get women like the ones on the site, or cure a hangover.

Within a week, a tub of powder arrived at my door along with a case of cans filled with something; Now I’ve walked past enough GNC stores and seen pictures of big, muscly men holding tubs of stuff to know that it works, so I was excited to try it out for myself. The short version (at least as far as I understand it) is that the powder assists in muscle growth, aides in recovery time and stems fatigue by retaining nitrogen within the muscle fiber itself. Demonika is a nutrition nerd and actually did some research on the various components, finally coming to the conclusion that the Recover Pro’s claims aren’t just a bunch of Black Magic.

Of course the proof is in the pudding and after logging hundreds of miles and choking a fair portion of it down (I don’t think it tastes very good, but then again, opinions are like assholes) I can attest to at least the recovery time being cut significantly. As far as muscle growth goes, I don’t know. I can say that at this most recent Sea Otter Classic, I was gifted an XL Rapha mesh base layer which barley fits on my left arm, so maybe they’re onto something.

The stuff in the can tastes like fizzy soda, is sticky when you spill it on the floor and don’t clean it up, and makes me feel like a gym rat when I drink it in my t-back muscle shirt. It effectively makes similar claims as the tub of powder. Being the furthest possible thing from a dietician, all of the scientific rigamarole that is presented on the site means nothing to me, but I know what I like, and I know what has results, which this stuff does.

After recently finding that my resting heart rate is just slightly above that of a corpse, the fact that my general level of energy is fairly low finally makes sense. A quick shot of protein helps me to feel like what I imagine everyone else always feels like, and the claims that this assists in recovery after a hard ride (or several easy ones) are now believable.

However I’ve yet to test this on a hangover, and I still look like shit with no clothes on.

The second box of product came from the good people at Honey Stinger and contained their Stinger Waffles and Energy Chews; 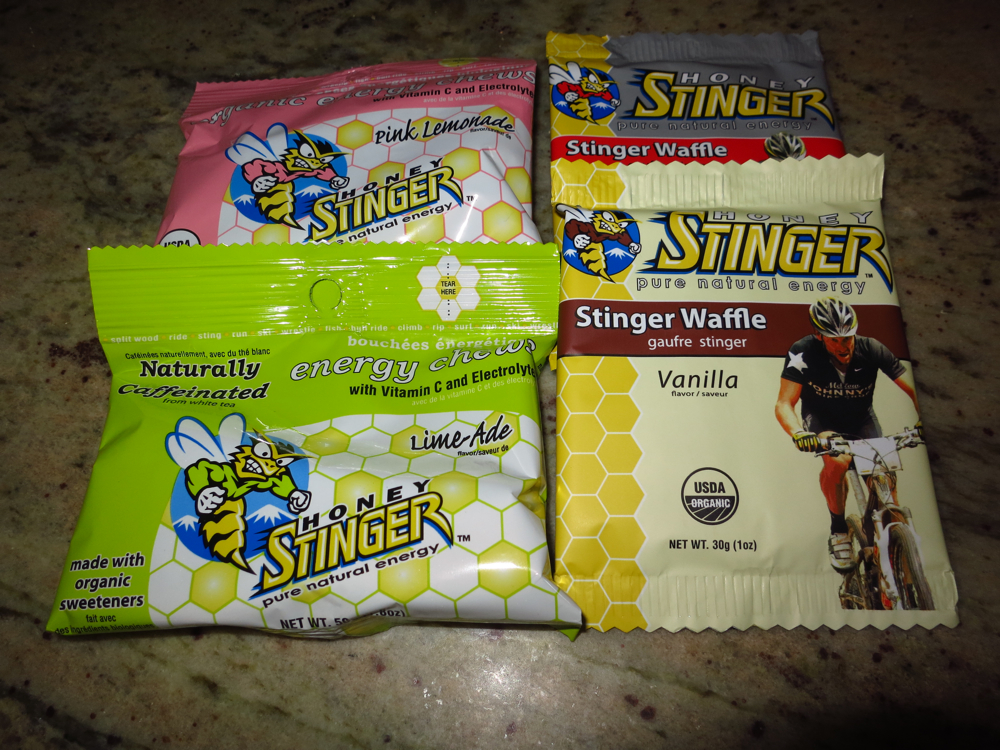 Two things I am a sucker for and will fight to the death over are cookies and candy, so I was interested in trying their products. Well, actually in the sake of full disclosure, for the first time last weekend I tried some of the chews and did several fist pumps in the air at their awesomeness. I had put Honey Stinger’s offer for product out of my head, so when a big box arrived from them on Wednesday, I ran around in several tight circles in my kitchen singing my ‘I love candy’ song.

I’ve tried an array of various energy chews, and aside from those made by GU, I’ve not been terribly impressed. These however are so good they’d make Willy Wonka cry, and if I don’t miss my guess, all of mine will be eaten by the time I’m done typing this sentence.

The waffles are basically delicious little cookies that are as good as something I might bake at home (which isn’t saying much, because most of what I bake as home, I screw up) and will, at least until I exhaust my supply, inevitably pull me from the clutches of my catastrophically dizzying and occasional ride postponing bonks.

So there you have it. My honest-to-Dog truth about an array of product I got for free, and which I probably won’t again.

In news kind of relating to food, (only inasmuch as the following story took place where people buy it), as I had concluded writing the above words, I was scanning around my Facebook page and came across a post that was penned by this fellow; “I was in the store getting food, and this dude maybe in is 20s clearly worked out/bodybuilder type, came up near the carts and said “man, you’re big. How can you live with yourself?” And I said back “easy, ride 1 to 2 hours on a pedal bike, wearing a helmet and spandex every day burning the miles up and losing hundreds of pounds with friends.” He walked away.”

Ernest and I have been virtual friends for some time and I am always taken by his passion and the support given to him by his compatriots. It appears as though he is as committed to building his fitness, losing weight and spending the kind of quality time with friends that we all cherish. In Ernest’s case however, I’m sure that he works harder than most of us can imagine, which ads just an extra layer of respect.

Upon reading about this exchange, I wanted to jump through the computer, travel back in time and publicly shame that kid for having the nerve to say such a thing.

Ernest is indeed one of us, and I am proud to have him in our ranks.

Wrapping up today’s post, I wanted to include a bit about a big-timey bikecycle athletic pursuit which took place in the southern part of The Golden State just last week. Or two weeks ago. Or something… I can’t remember.

Anyway, the flyer for said event looked like this; Obviously I didn’t attend, as that would have meant I’d have to leave my house, and probably put shoes on. However Alain, who not only is the Frontman at Maximo Supremo residents Spy Optics, but has been my point person throughout the planning and execution of the BWR ride.

I’d asked Alain for a simple description of his experiences which he concluded with brevity;

“My colon and spleen are only now returning to normal function… Somewhere on the road around Bandy Canyon. I miss them.” Hard men and women don’t need colons or spleens. They let their anger do the digesting.

On that note, I’m gonna make like a banana and get the hell out of here. After all, these snacks aren’t gonna eat themselves nor will my money throw itself at the computer.

They’re both going to need some assistance.

27 Responses to “Throw your money here.”