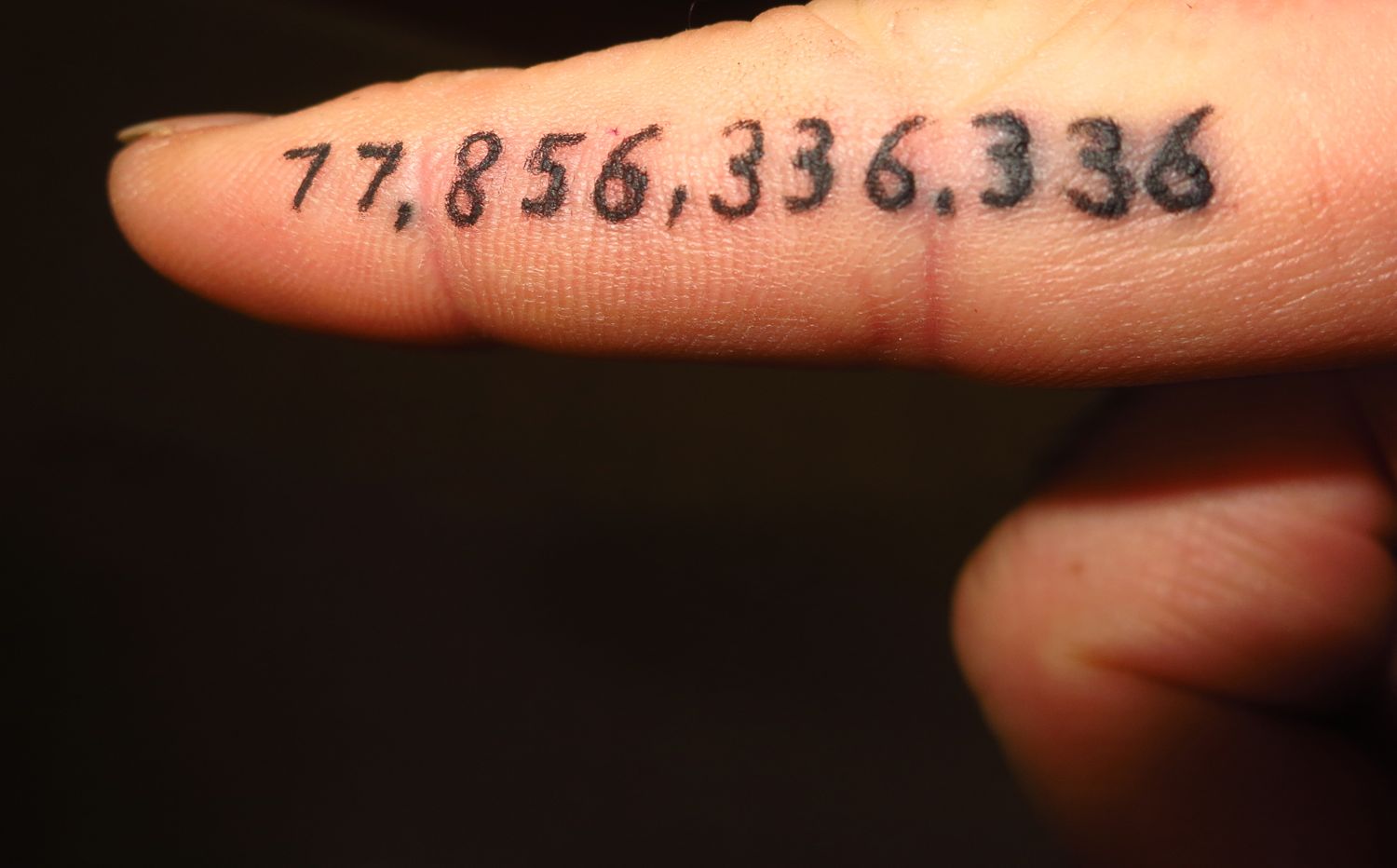 The above number has spent the better part of a year riding around within the confines of my wallet, until this past Friday I stopped in to swap some stories with my friends at the FTW Tattoo Shoppe, when I decided to unleash the little bugger and see where it landed.

As it turns out it wound up on the outside of the ‘I’m number one‘ finger, which is ironic because according to some kinda kooky mathematics that a room full of smart people came up with so that individuals can find out where exactly in line they stand in the history of homo sapiens. (Again, I take it with a grain of salt simply because the more we know, the less we thought we knew.)

Even though I’m going to get ‘I.A.U.S.F.’ tattooed on the other side. 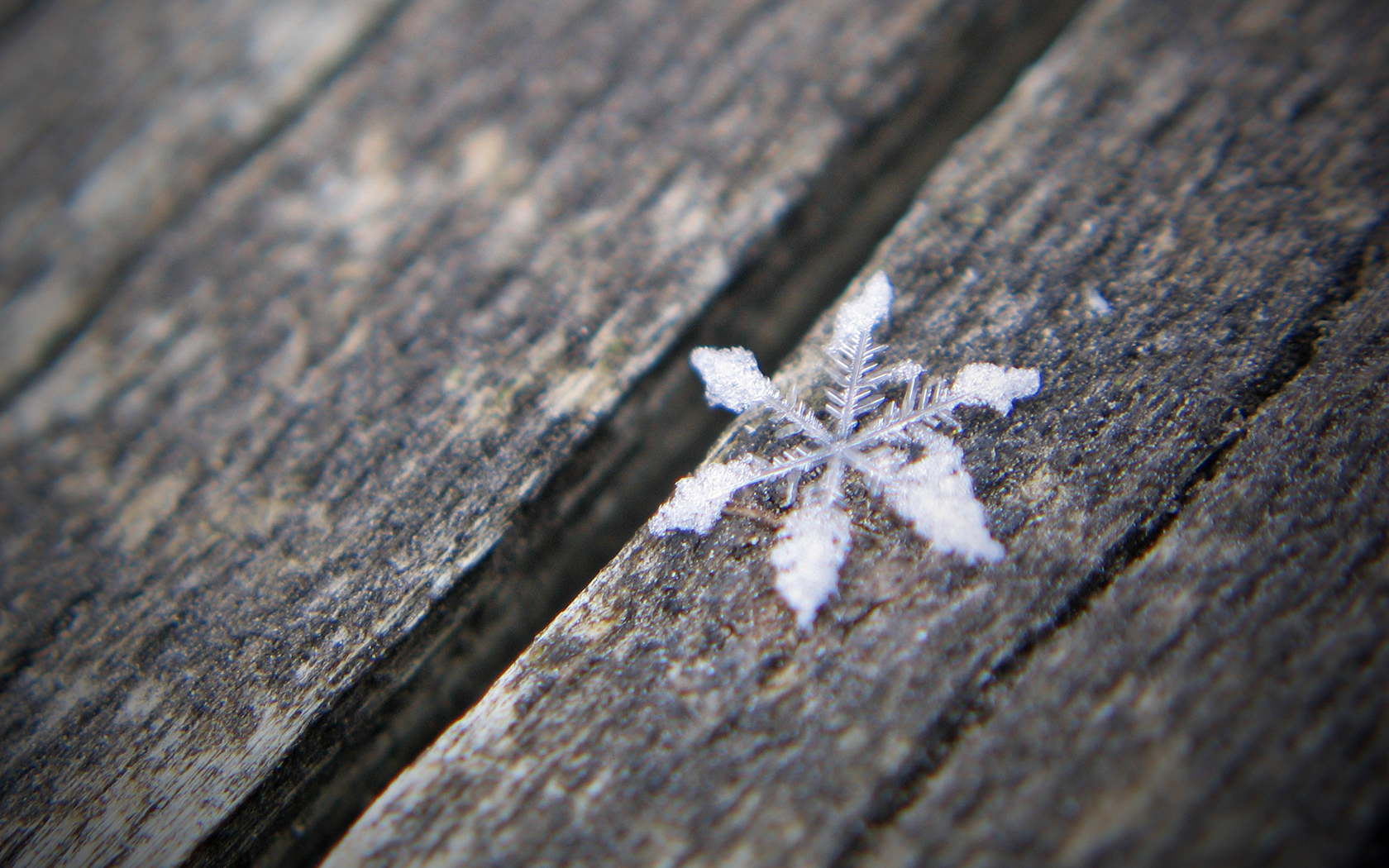 “Didn’t I realize that each of us is a sacred, unique snowflake of special unique specialness?”
― Chuck Palahniuk, ‘Fight Club’

Milo and Chuck’s irreverence is contagious.

Oh, and before I forget, I neglected to mention even a peep on Wednesday regarding National Day Of Slayer, and for that I apologize, though I suspect some of us payed heed appropriately regardless.

In an attempt to make up for the omission, I offer you this.

Getting that as a ring tone as the only reason I ever got a cell phone to begin with.

Here is a bit of news you can possibly use. The favored shoe for river walkers, frat boys and hacky sackers alike, Teva, have recently entered the cycling market with this line of ‘freeride’ shoes. Being that I am one of the free-est riders around, (I rode a chairlift to go mountain biking once in 1999) I naturally came to mind when they were compiling a list of people who ride bikes and have feet. Looking through the styles of shoes I was most taken with their ‘Crank‘ which they very generously sent to me last week; 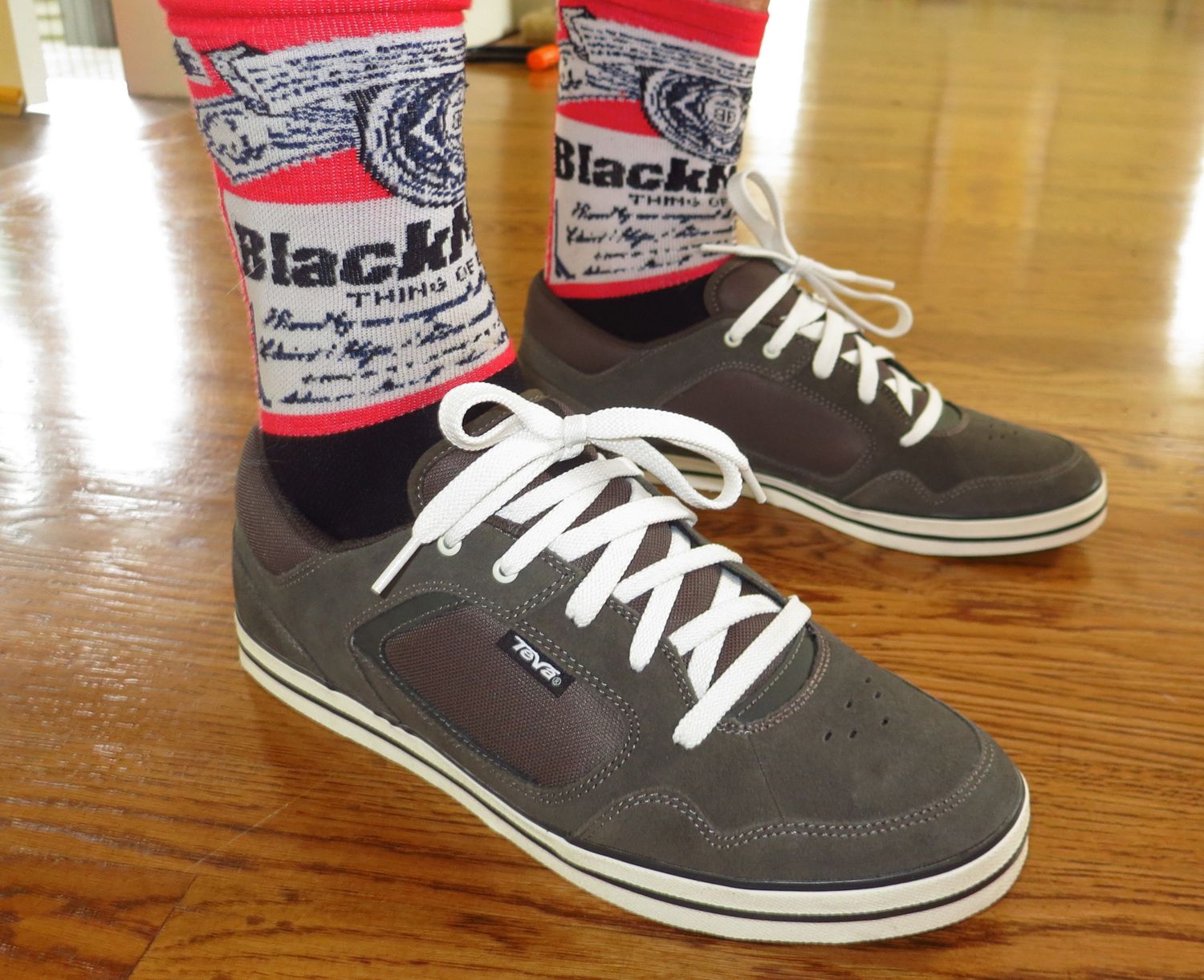 As I have done with my Chrome shoes as well as my favored DZRs, I first responded when opening the box with a “Hmm… They’re not Vans”, because since I was a young tot of twelve years old, Vans have been my preferred footwear, but truthfully, when I put them on, I actually smiled.

Second to that, Teva has vowed to clean up a foot of shoreline for every pair they sell which is pretty cool.

Though with this extraordinarily unsettling bit of news I found recently, they are going to have to sell a lot of shoes.

In other news of stuff and things, I recently have touted the new Paul Price and Company Bicycle Component Manufacturing Company bikecycle stoppers, but not because I had a great deal of experience with them. I thought they might do the trick, but then again, I’m wrong a lot.

It was on Monday evening when I embarked to Sonoma County for a Tuesday parts test excursion/’media camp’ with Carlos and Fish from Bike Monkey. I didn’t know specifically what it would involve, but I heard trails, and roads and fields, creek crossings, and a crossed eye or two… All of which it delivered in spades.

The landscape up there is lush, hilly and remote with climbs that make you think about walking, but I will give my words a break and rely on photos.

First we rode a road which wasn’t really a road but then later turned into one; 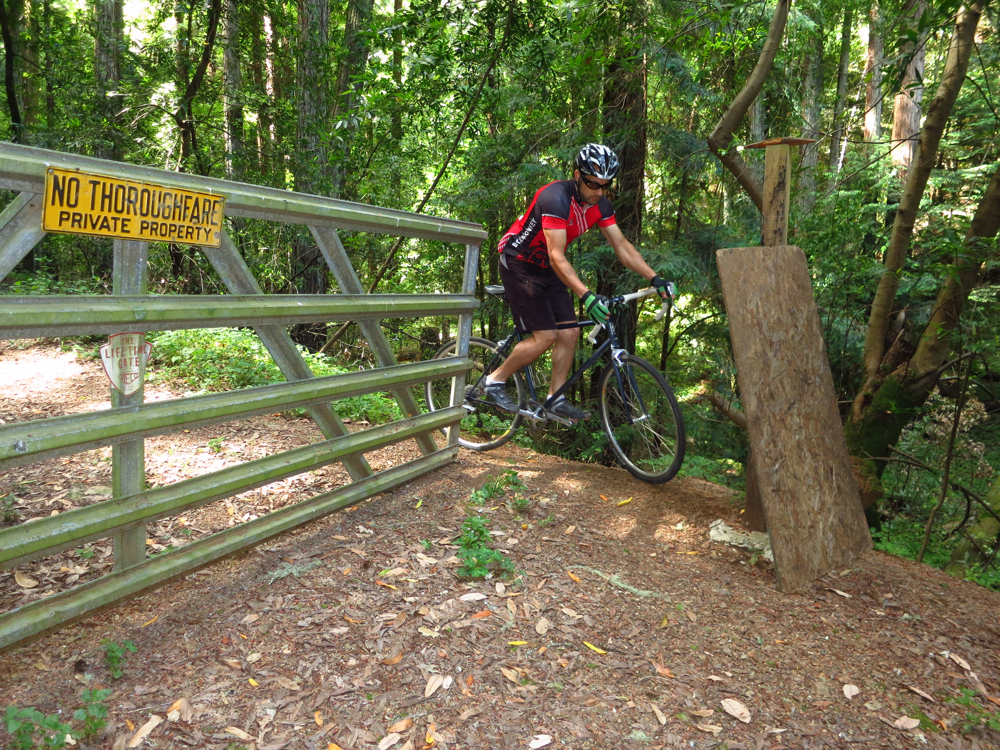 Holy balls, it was really steep; 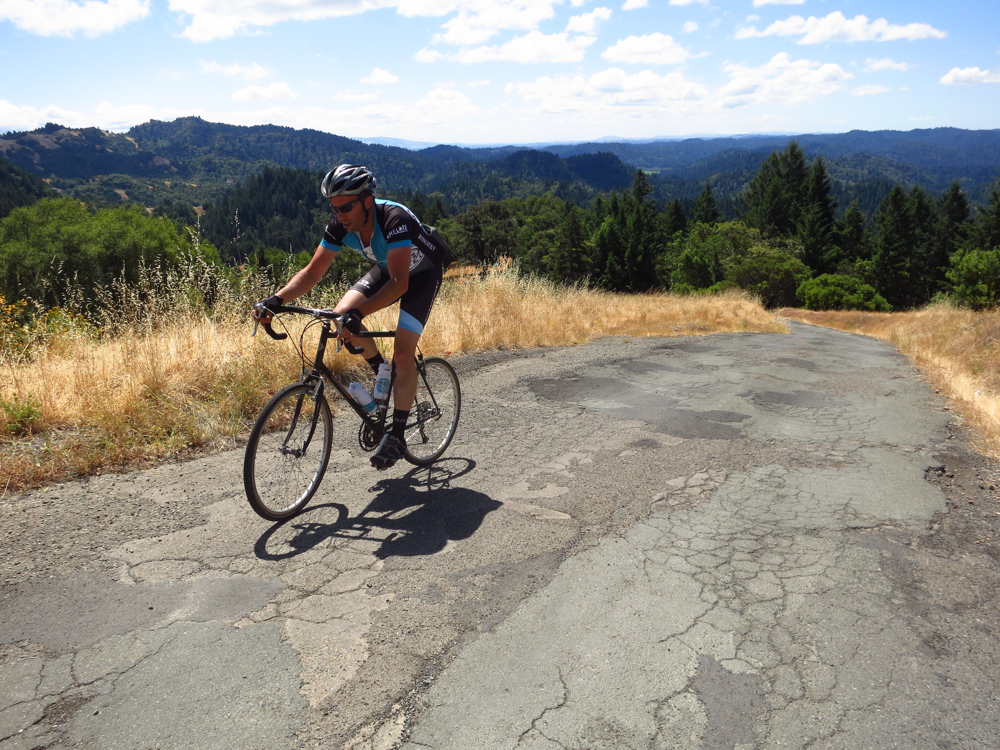 It was the kind of steep that if you dropped a pebble, it would free fall to the bottom of the hill.

From that point, it was wide open vistas and the no-man’s land of a long since closed camping facility; Then we descended singletrack and fire roads, and jeep-ish trails; -all of which passed a number of pig traps which Carlos suggested I crawl into. He tired of me sooner than I expected; A short time later we were on a rough and tumble doubletrack which crossed a creek a number of times. Being one who spent a great deal of time playing in similar babbling bodies in my formative years (as well as much as possible the rest of the time), I was transfixed; After crossing the creek five times, we continued back along a considerably more well maintained dirt road -into the picturesque town of Healdsburg where we dined at a pork store called Wurst, which happens to be owned and operated by the MC5’s former bass player, Charles Bell.

After taking on a load, we got back on the road; 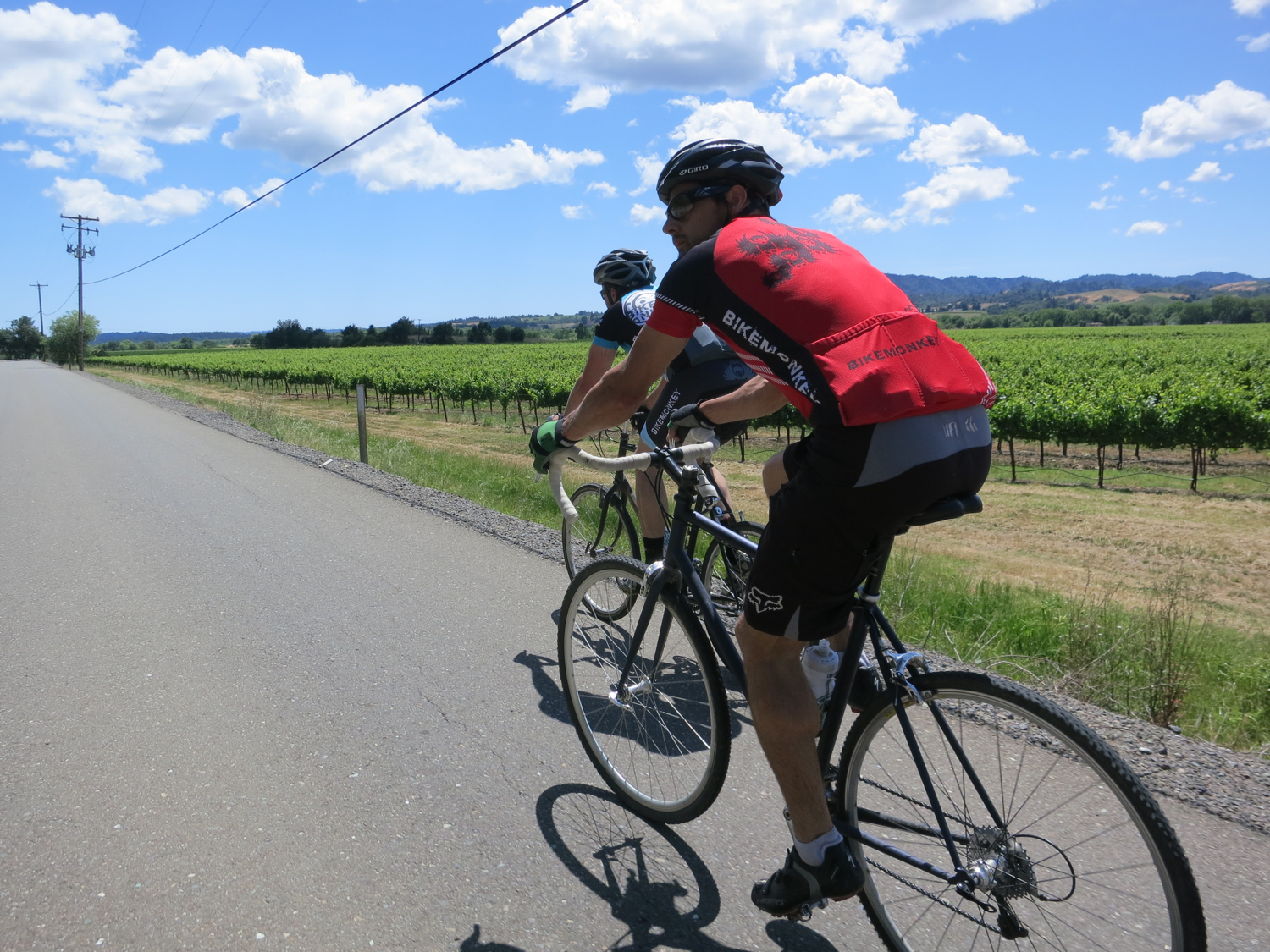 At this point in the day, my (fourth) beloved Canon S100 took a shit and the lens refused to retract. I high fived the sky, packed the sadness in my bag and we continued on through more of the same, but better, until we arrived that the KOM segment of the ride, which I snatched from the very capable hands of Carlos. I would refer you to my Strava account for you to see the details of the ride if I didn’t think Strava was stupid.

It was a perfectly blissful day in between somewhere and nowhere with friends and I wouldn’t have had it any other way.

Aside from having a fun time in nature, my secondary objective with this ride was to put the wood to my Bruce Gordon signature Rock ‘n Road tires, and the previously mentioned Paul Price and Company Bicycle Component Manufacturing Company bikecycle stoppers.

As I said before, I was suspect of the tires due to the low profile tread, and the gum walls. “Those look like old man tires” I thought, but gave them a shot anyway, because if there is one thing I like, it’s not liking stuff;

My initial perspective couldn’t have been further from the truth. On everything from technical, rocky ascents, to loamy singletrack, to rock-strewn fire roads to smoothly paved country roads, the Gordon skins handled it all like a champ. It would appear as though they have a far more durable compound to my favored, (and discontinued) Richey Zeds and were surprisingly nimble on the most challenging of terrain. I understand these are currently en route to Bruce’s shop, and if a really incredible all-arounder monster cross tire is something that might strike your fancy, I highly suggest you get in on the incoming shipment. Granted, they are not feather weight Vittorias, or whatever, but if that’s what you were looking for in a gigantic multi-purpose cross tire, go back to reading your forums. They’re lighter than their predecessor by a respectable amount, and that’s all that matters.

Being a founding member of people who actually make their own shit, it should come as no surprise to anyone that Bruce actually painstakingly carved each of these tires by hand out of a massive block of rubber.

Secondly, the Paul Bikecycle stoppers were a god send. I have long run a combination of his Touring Canti and Neo-Retro primarily due to their resemblance to the classic Mayfac, but old age has set into my hands and I tire of squeezing the life out of my brake levers on rippingly fast descents and day long adventures. They work beautifully in a racing application, but I never really fancied them for all day excursions, or mountain bikecycle styled cross rides.

I was hopeful that the Mini Motos would be what the doctor ordered and again, my expectations were squelched by the awesomeness of reality. They are far superior to my TRP 8.4s, though almost twice as much for a set. Still, being made right here in Amerikuh by an independent manufacturer I think makes a decision between the two abundantly clear; 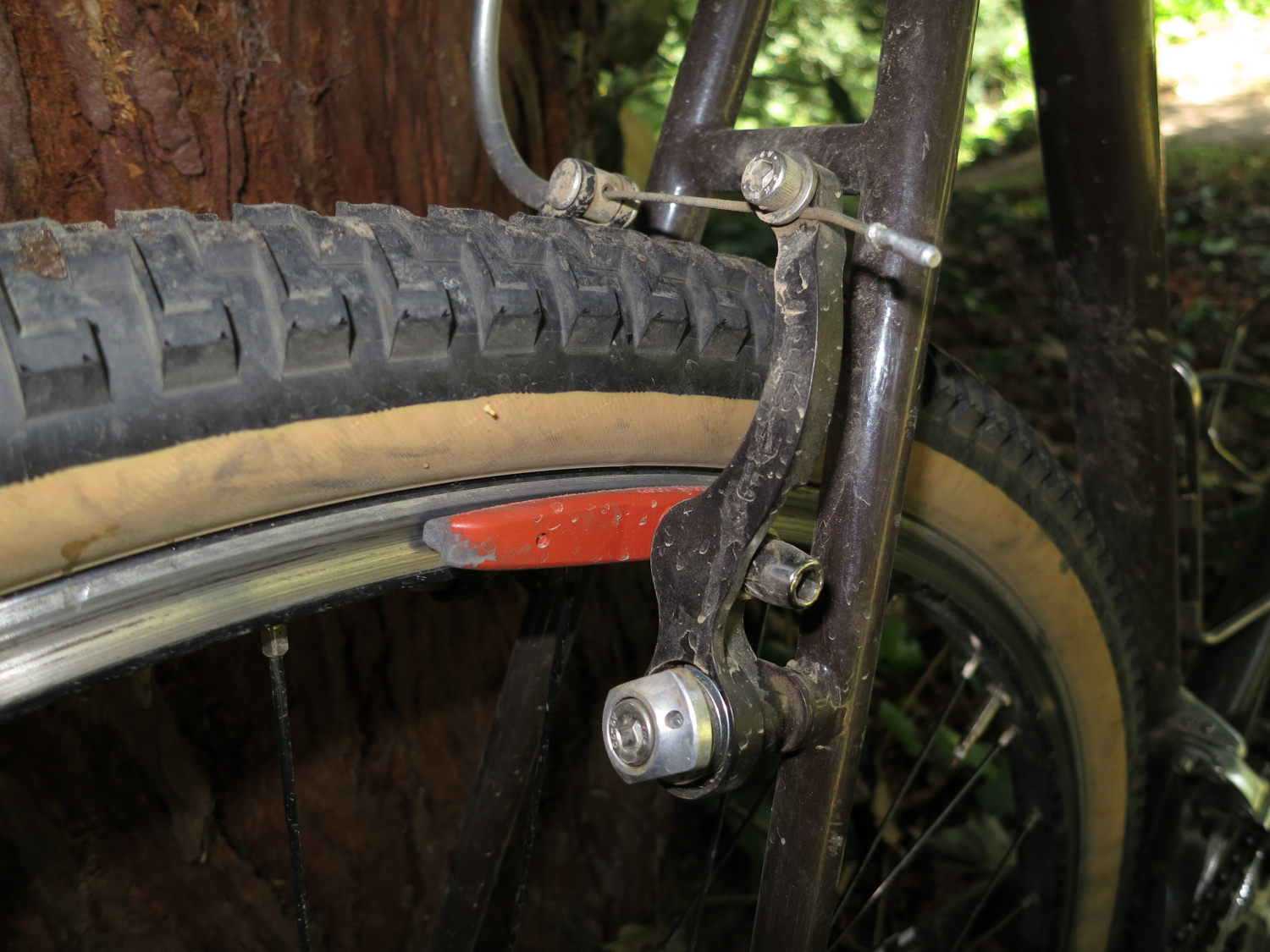 This weekend Fish and I discussed (among other things) the general disingenuousness of product reviews one might read on a site such as this, or a magazine such as his. I’ve heard repeatedly over the years of stories regarding advertisers sending product and if the magazine (or website) doesn’t say something nice, the ads get pulled.

I most defiantly am not a person who will blow sunshine up somebody’s skirt just simply to maintain a happy working relationship. Luckily, for the most part I have been exceedingly fortunate that the random bits and pieces that land in my lap are items I would have gladly paid for anyway.

I might want to be both stereotyped and classified, but in that, I would also like to be considered honest to my own detriment.