Getting right down to the tacks which are made of brass, I don my web logger’s cap and fire up the machine. Never one to be on the forefront of any industry trends, I missed the boat with springtime’s launch of several shoe designs from the likes of Rapha, Fi’zi:k, and most notably Bont’s custom footwear for Bradley ‘Cunt’ Wiggins; Many thanks to Tati Cycles for the assistance in tracking these down. I was beginning to think my recollection of them was little more than a bad dream.

Well, inspired by all of the frenzied design, (but most especially the latter), I responded to the call and in partnership with Spears Footwear have finally released the new AHTBM road shoe; These are truly exciting developments for me, as it marks my enterprise being moved into the next level and I am excited to see what the market’s response will be.

And while we’re on the topic of shoes, my design guru BradO occasionally wears them.

Not only that, but in the midst of a vodka fueled wagon-falling-off the other night (I had, up to that point, been three weeks sober), I checked my email to find that he’d sent me the following burst of inspiration; I consider myself very fortunate to have such skill in my corner, random benders notwithstanding.

In news of tight pants, Nick from Minneapolis West’s own 21st Ave Bicycles made contact with me last week regarding their newly released stretchy suit;

Thought I’d drop a note about our new kits and the accompanying video.

Even though the lovely and talented Amanda Sundvor has moved on to Chrome PDX, we’re still trying to make it awesome here at 21st Avenue Bicycles.

Former employee (and current Chrome employee) Sean Light did a bang-up job designing these kits and Castelli made them happen. To spread the word we made
another stupid video with James Wilson;

Sean is a hell of a graphic/industrial designer in the making. I’m really stoked on the kits and like to think that I’d be looking to grab one even if I didn’t run this place.

With their skins on your meat sack and my kicks on your paws, you don’t stand a chance of looking slow.

Speaking of which, ornotdependingonwhatwe’retalking about, on Friday evening, JMac and I had dinner with Pete.

Pete is the new head cheese at the Swobo brand.

I would figure two of the people who might be most critical of its latest incarnation would be J and myself. Well, old Pete (who from this day forward will be referred to as ‘El Jefé Nuevo’, unless something better strikes me) laid most of his cards on the table and gave us a full monty of what he and his brother/partner Justin have in store for the little company who could, and I say without reservation that it all sounds really, really promising. 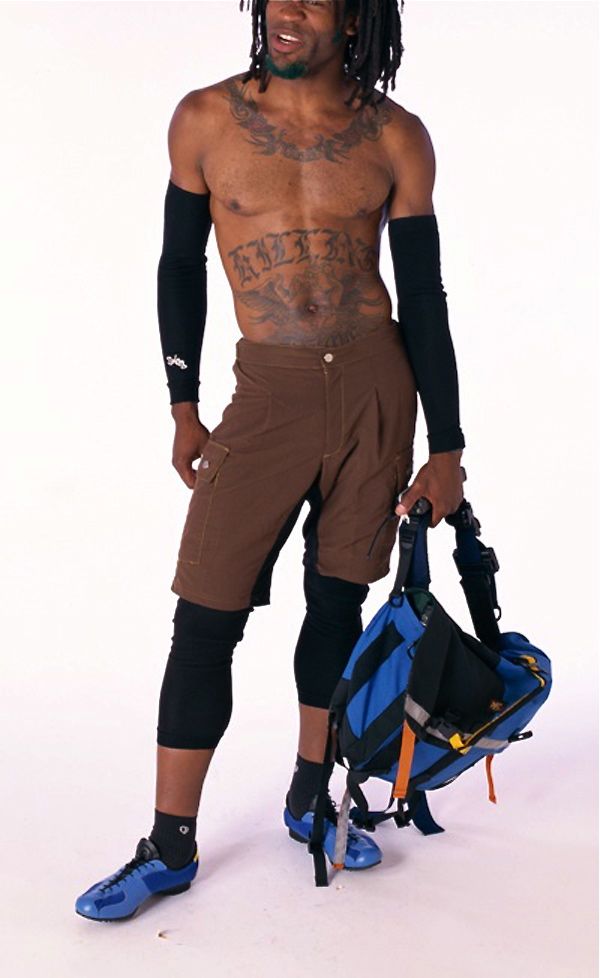 (Back before Big Dave cut all his hair off and started getting voted as ‘San Francisco’s sexiest bartender’ and whatnot, when he was messengering, this is actually what he wore on a regular basis.)

After the highs and lows that I have experienced with the Swobo brand over the last seventeen years or so, I frankly wasn’t prepared to be as excited about what is on the horizon as I am, but as I said to Pete on Friday, despite what may or may not have occurred during my time there, I don’t relate any unpleasantries to it. The legacy of the company is much bigger than that to me.

Without the company, whose San Francisco offices I first stumbled into so many years ago, it’s not likely I would have had as many misadventures and beautiful friendships develop as I have. The company was much more than just a business to a whole lot of people… It was the catalyst which brought us all together, the foundation and ideals for which we all stand, and ultimately, at the end of the day, what allowed fate to see fit that All Hail The Black Market could ultimately exist. So for any skeptics who might possibly remain, please give it one more chance. I think, and I hope that this time it’s going to stick, and I for one couldn’t be happier to begin this journey with these first steps.