While exchanging tits and tats with John “I used to collect flat billed ball caps but now collect high dollar camera equipment” Watson and Jordan May the other night via the Twitter, Jordan mentioned his quest to find a mountain bike specific site that focused on detailed aspects of that particular scene. After John had kindly directed him towards AHTBM, Jordan concluded that though he occasionally enjoyed the content I amass here, (he) “wouldn’t consider it really covering the encompassing mtb culture.”

I have to give it to Jordan for keeping a keen and critical eye on this site because he’s absolutely right. I like mountain bikes, and have for many years. I ride them, and have raced them, and know lots of people who design and build them, but from my perspective, I don’t think that that is the bulk of what or who any of us are.

It’s true I guess… I could make this a site one that solely focuses on all of the aspects that say, BIKE Magazine does, but it would still be a crappy shadow of what they’ve already built.

The more I thought about it, the more I realized the ‘culture’ that I tend to wade in has everything to do with mountain bikes (or cross bikes or road bikes, or whatever other kinds of bikes you see fit to include in the list), while at the same time having nothing to do with any of them at all. Just because bikes (and mountain bikes specifically), were the catalyst of how I found myself here behind this electronic pulpit, that’s all it was. As the years go by, the more layers of a scene (as well as people, because after all, what is a ‘scene’ without the individual components therein?) develop.

Would you rather read a story about how Carl Decker won another race, and then detail his tire selection/suspension settings/moustache wax, or about how he took me out for hot laps in his rally car and made me pee my pants? (Carl- you’ve got my number, buddy. Any time you’re ready.) 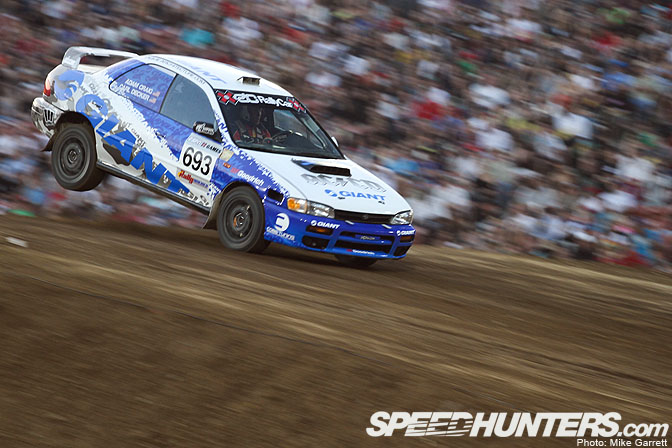 Or that along with a friend (though I suppose it is kinda mountain bikey), designed and built the baddest coaster brake hub ever in the history of ever.

How about another long winded report detailing Santa Cruz Bikes’ super genius Joe Graney and what sort of software he uses in designing the nextest and the newest that everyone will be waiting in line for, their gift wrapped left nuts in hand, or a piece about his beloved 1949 GMC PDA4101 highway coach, (which by the way, has the original motor in it, a Detroit Diesel straight 6 two stroke, which as more than one old timer has told him “it was the motor that won the war”, and a Spicer 4 speed tranny with a single plate clutch with no syncromesh, leading to “a lot of excitement driving in the mountains”. It does a comfortable 68 mph on the freeway, gets 8-10 mpg, holds six gallons of oil, its got 3 power amps, 2 12 inch subwoofers, 1 solar panel and can hold eight kegs comfortably), that he restored piece by piece, and the near insanity it sometimes caused? 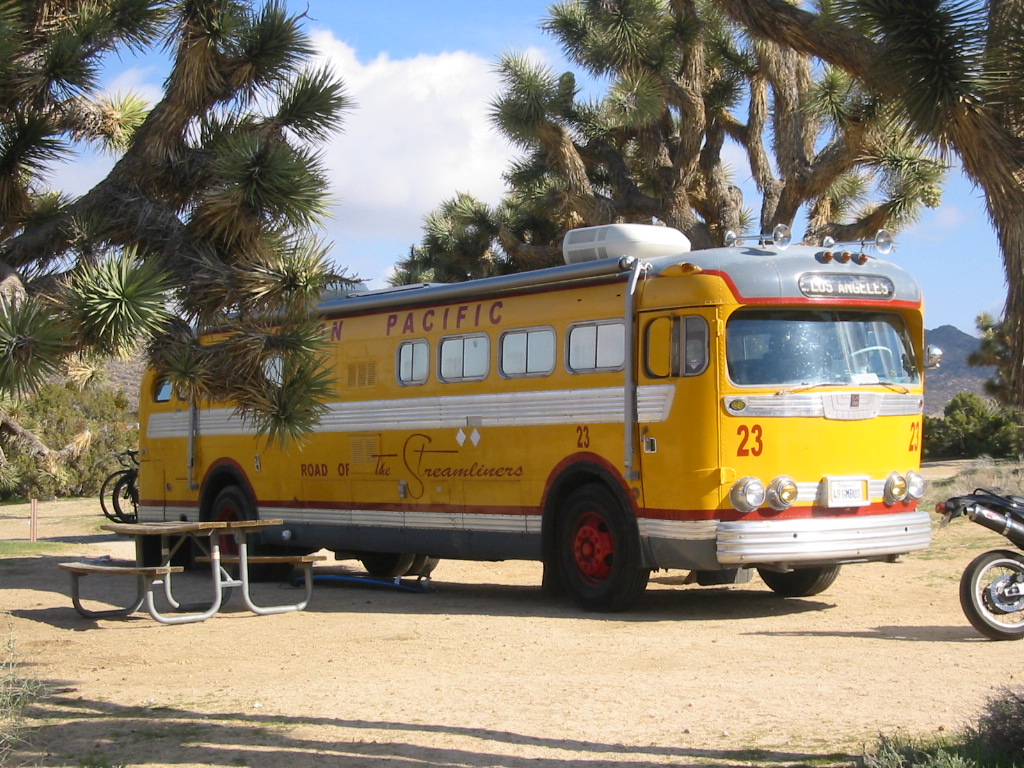 Or, the as of yet published conversation I had with former professional cyclist/currant all around derelict, Bob Roll consisting entirely of the most debased ‘would you rathers‘ I could conjure up?

How about picking between a discussion with frame builder Jim Kish? We could talk about his tubing selections, where he sources titanium from, and I could take a bunch of photos of his shop, or a detailed account of the fact that he’s an accomplished musician (as are Salsa founder Ross Shafer and Rock Lobster’s Paul Sadoff) with an extensive knowledge as well as collection of hand crafted banjos and fiddles. Or why not a bit of both? 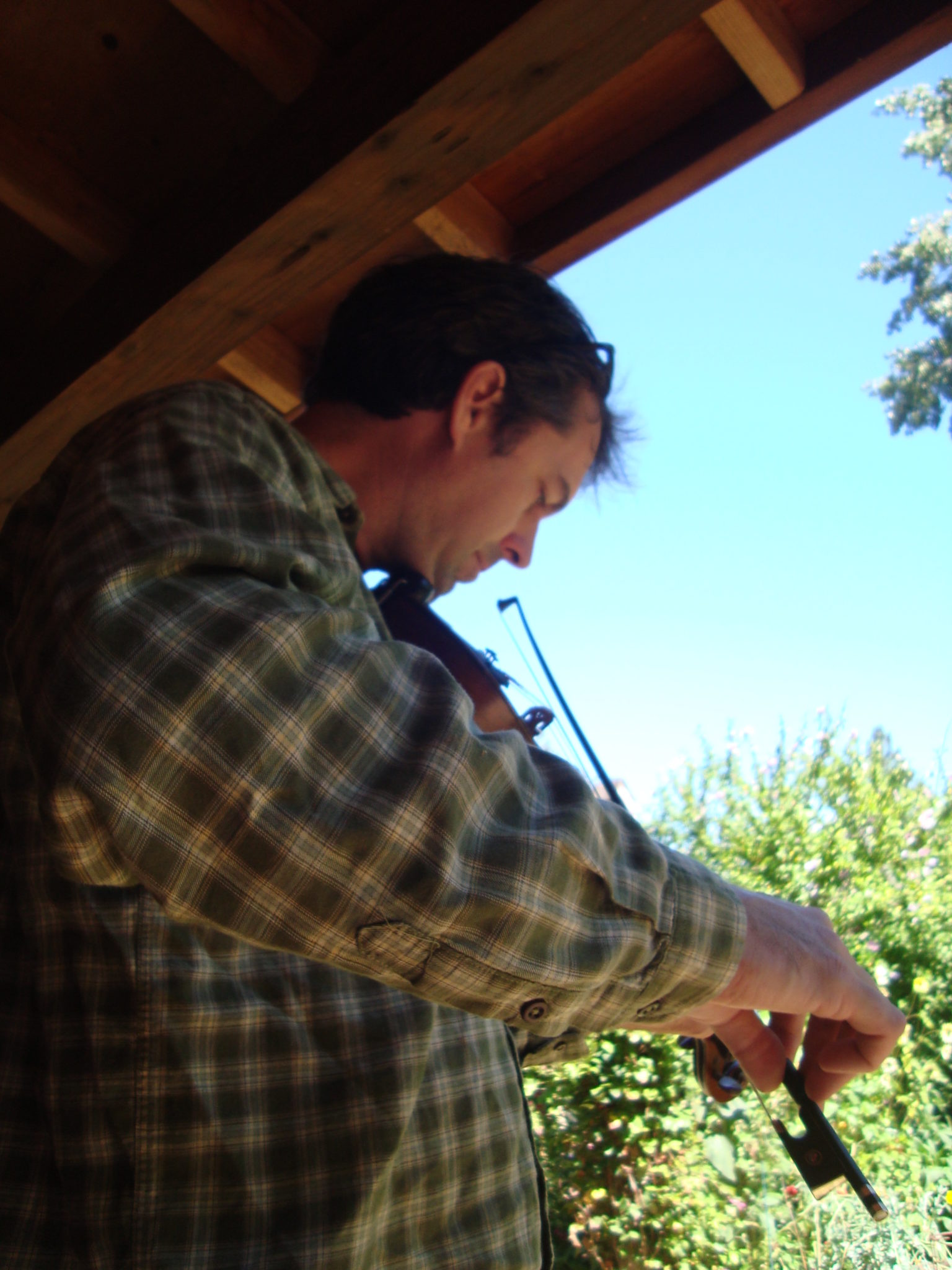 All this is, is an attempt at not underestimating the intellect of the readership (and because frankly, from my perspective just focusing on bike stuff is boring). Simply based on the correspondences I receive, I know that people who come here are a multi-facited bunch with a wide array of interests.

My point is that it’s the people of the culture, that make the culture- Not the other way around.

To that end, I like to think I attempt to cover it pretty thoroughly.

I suppose if this plan craps out, I can always fall back on tennis balls.

With that said, I can now only do one thing and contradict myself with a mountain bikecycle product review.

Last week I’d mentioned that I finally got around to throwing on my new fancy pants Rubena skins. Well, after Joey and I had our crash fest together, during which time he left a sweet head badge smear across a not-so-hard-to-see gate; It was just a couple hours (days, whatever) later when I took my Hunter brand twenty-ninering mountain styled bikecycle into the woods to give the tires a healthy rogering. The following is what I concluded-

They are super bad ass. I had a higher tire pressure in them, so in the East Bay’s current dry conditions, they were a bit skittery at first, but after releasing approximately 2 to 3.5 psi from each, I was the belle of the ball while fearlessly engaging in all of the adjectives one might read in a mountain bikecycle brand catalog; Of course the proof will be in the pudding and once I see how they wear (or more specifically, how long they take to wear out), and most importantly, how they work in the imminent ‘hero dirt’ season (i,e, the only season when I am really good at riding mountain bikecycles.)

Only then will they be qualified to be subject to my tried and true rating system.

And while I’m on the topic of contradicting myself, as I had mentioned previously, this weekend saw the second annual ‘A Ruota Libra’ bikecyclepizza show in San Francisco, California, U.S.A.; 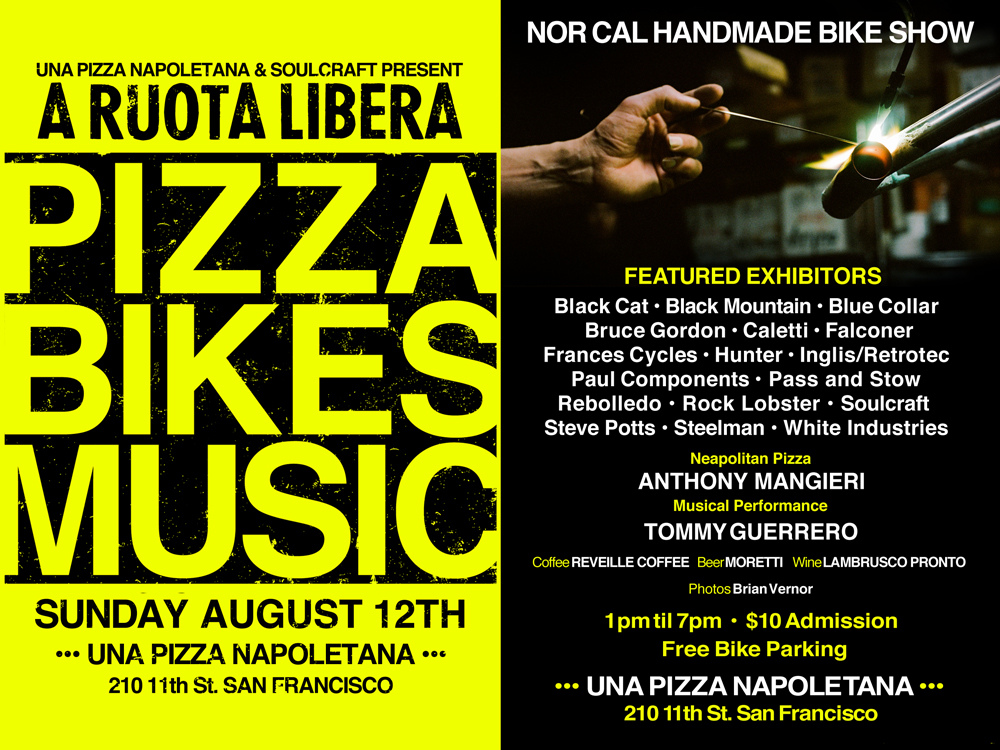 The day before the show, my door was darkened by Rick and M.A. and we proceeded to tear all kinds of new ones in some food and drink in preparation for the event’s festivities.

After a restful night’s sleep, we opted to kick start the day that would most assuredly be filled with talking about all manner of bike, by actually riding some; 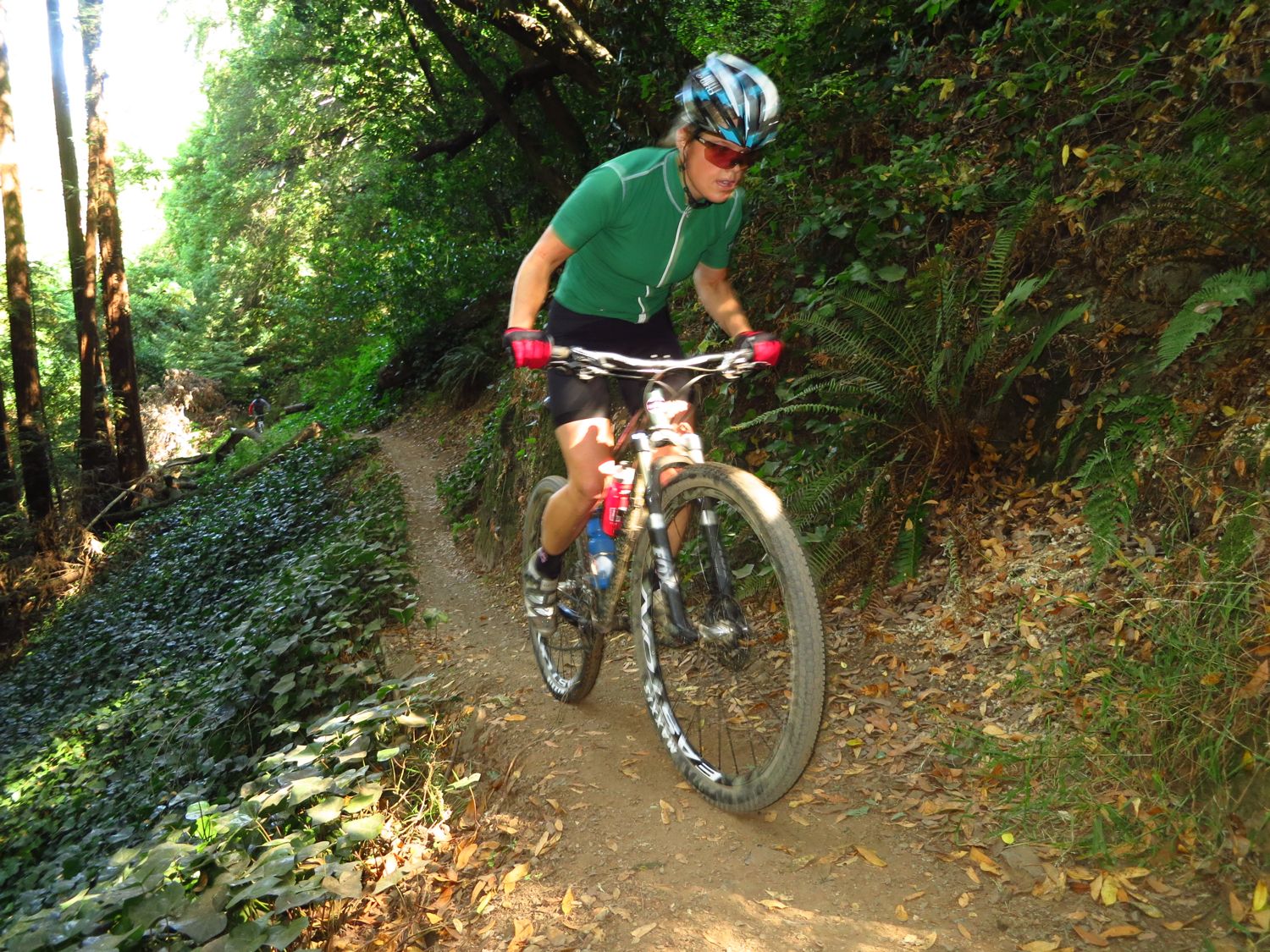 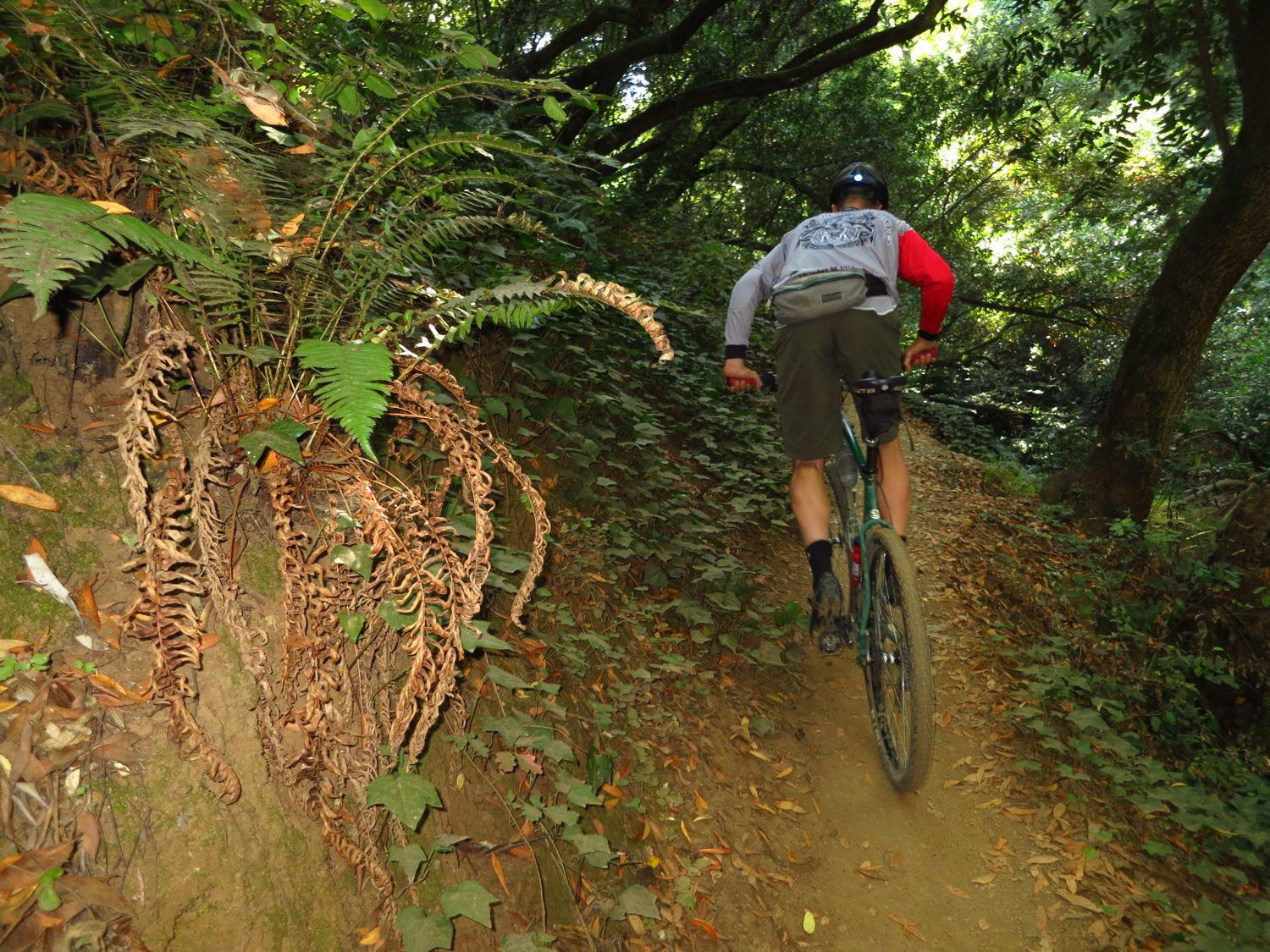 Luckily for me, Blue Collar Robert brought me back my beloved El Toro Bravo after its starring role at Bike Magazine; 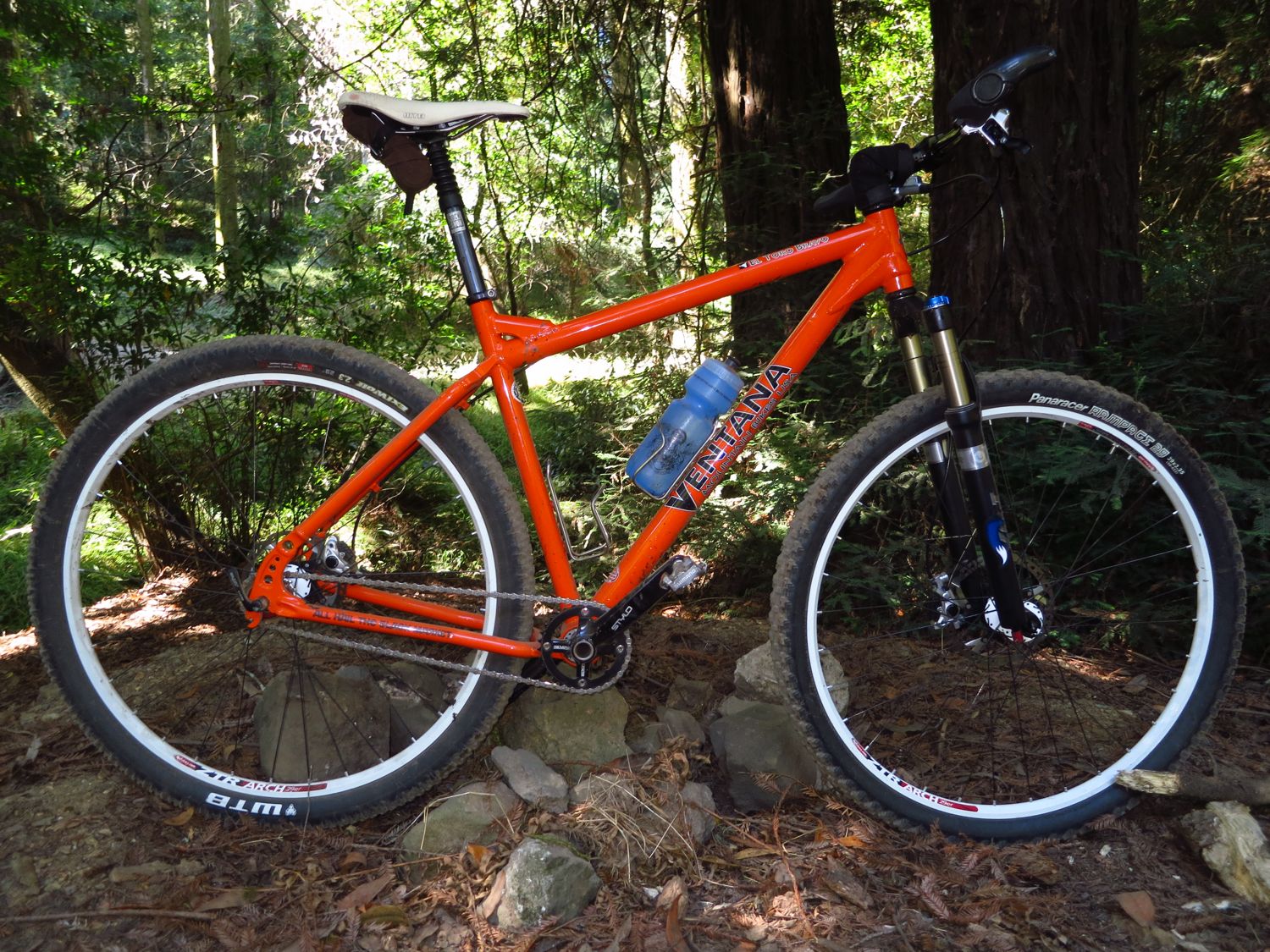 Holy cow, do I love that bike.

Aside from Utah, it had been a while since I’d ridden much of any kind of mountain bike, let alone a single speeded kind, and I was a kid in a candy shop, or if you prefer, a pig in shit.
All of the time spent on a road bike the last two months paid off as I led the Hunters over hill and dale in my local network of singletrack, but daylight was burning and we had to get into the big city to make the scene. To save you the effort of trudging though any labored wordage, I’ll just provide an array of images and allow you to draw your own conclusions; 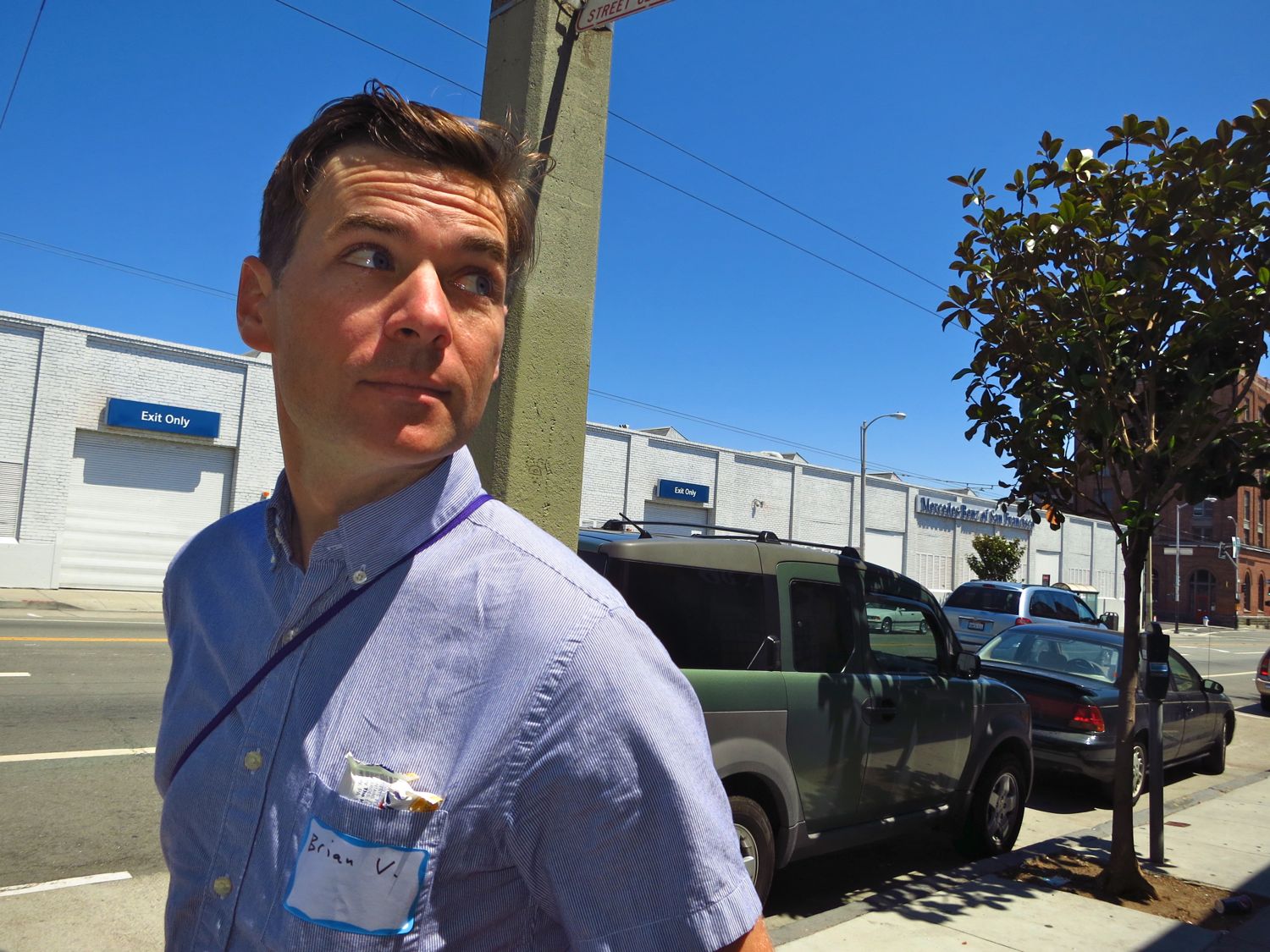 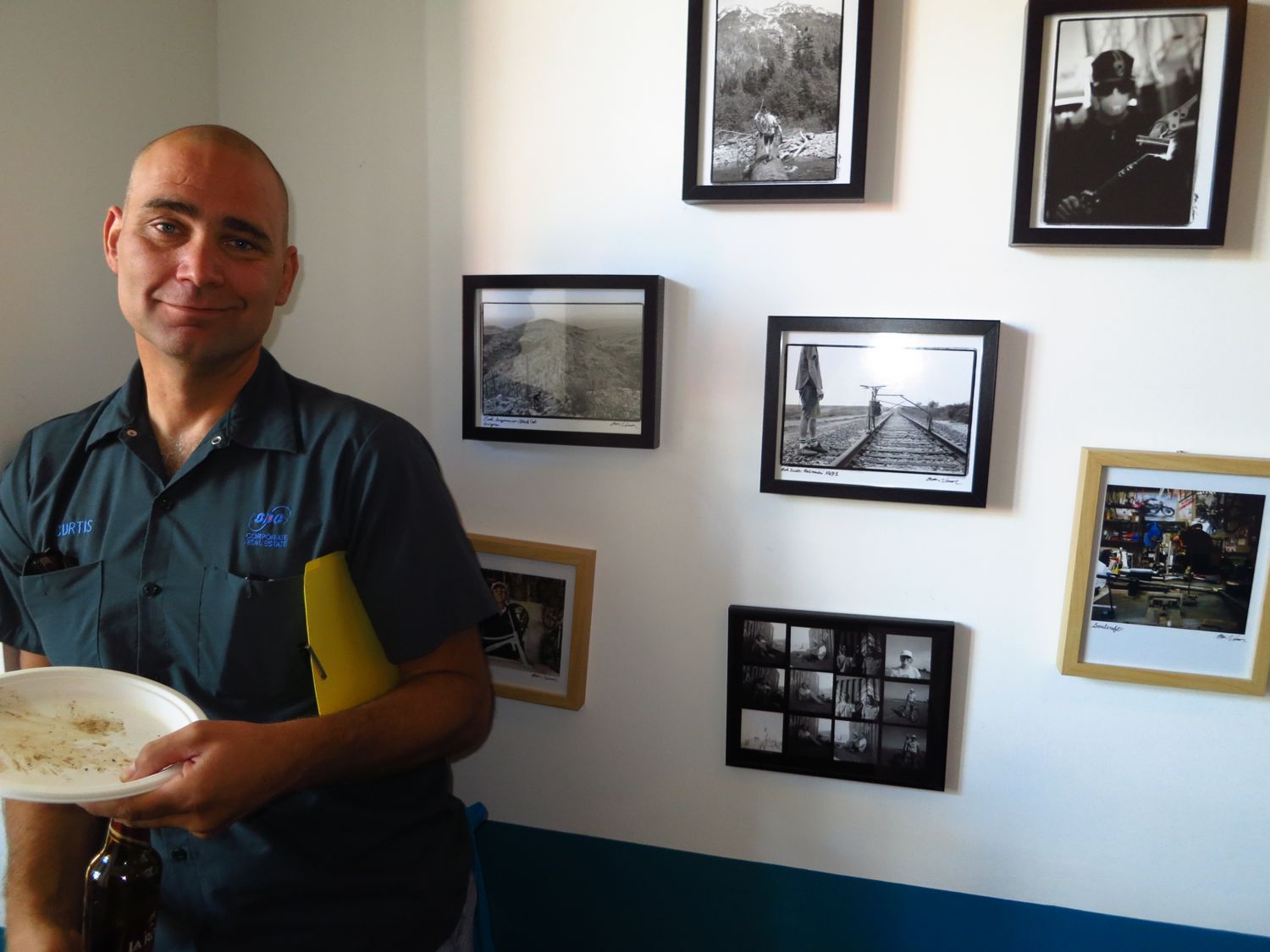 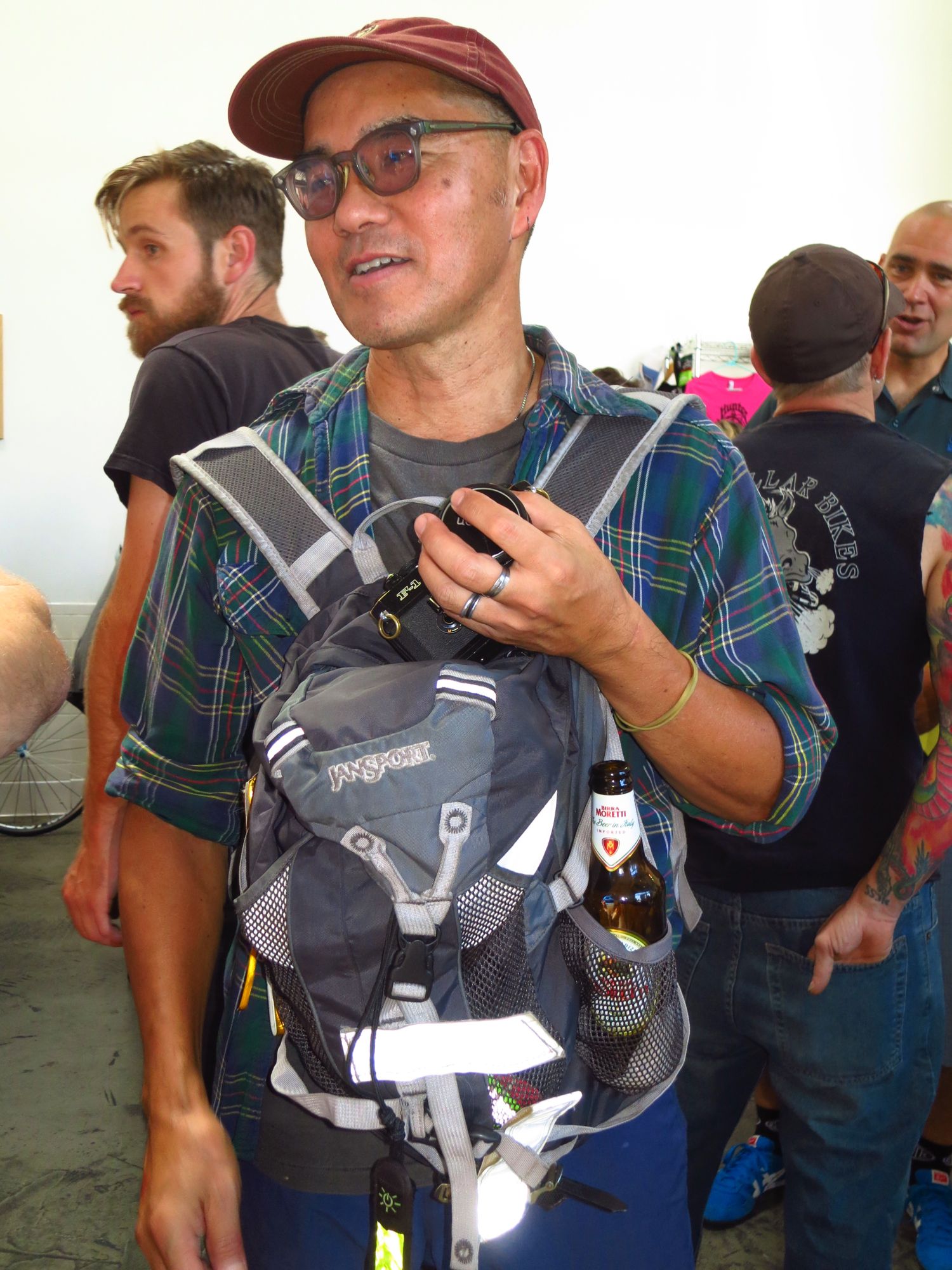 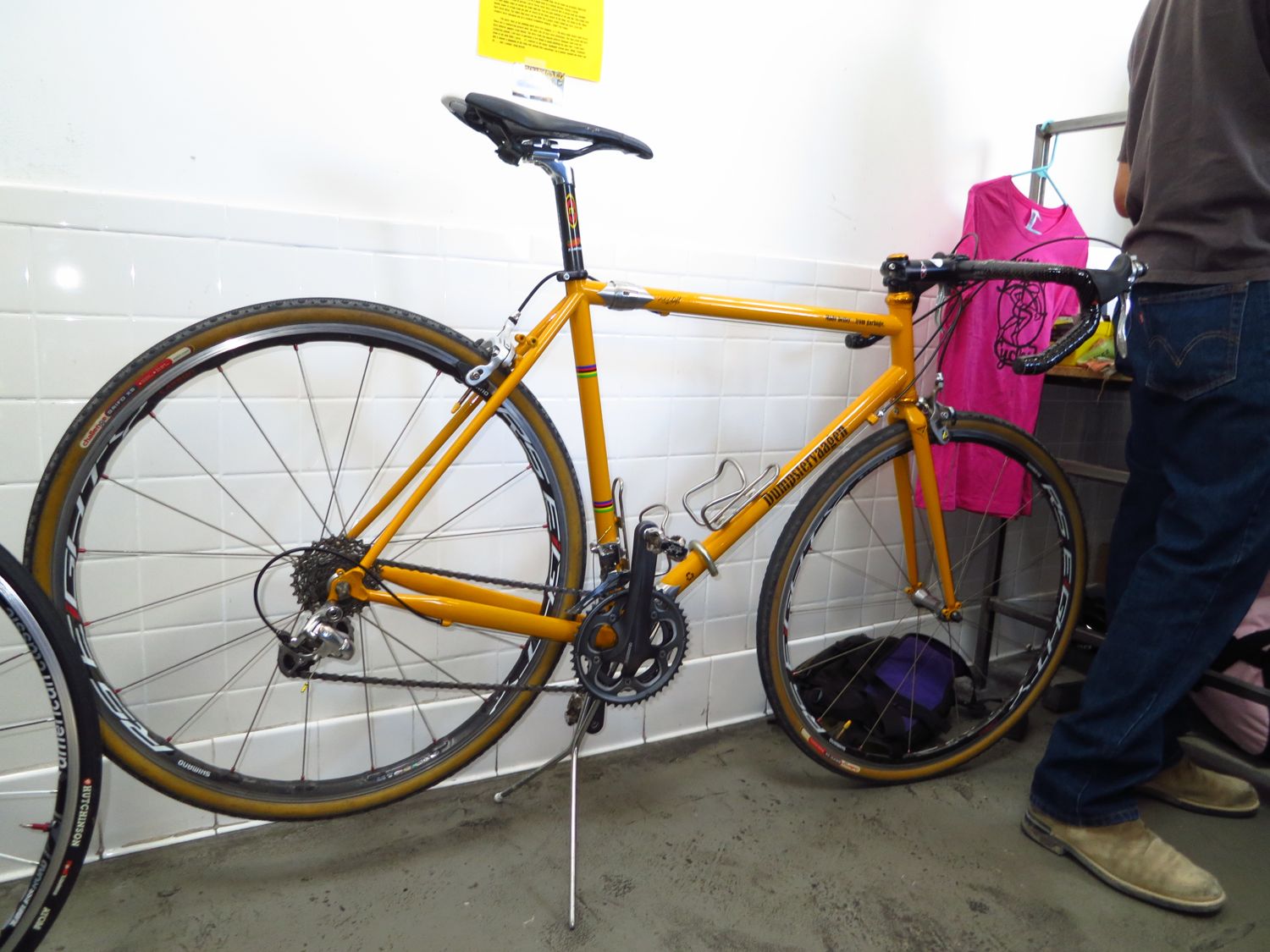 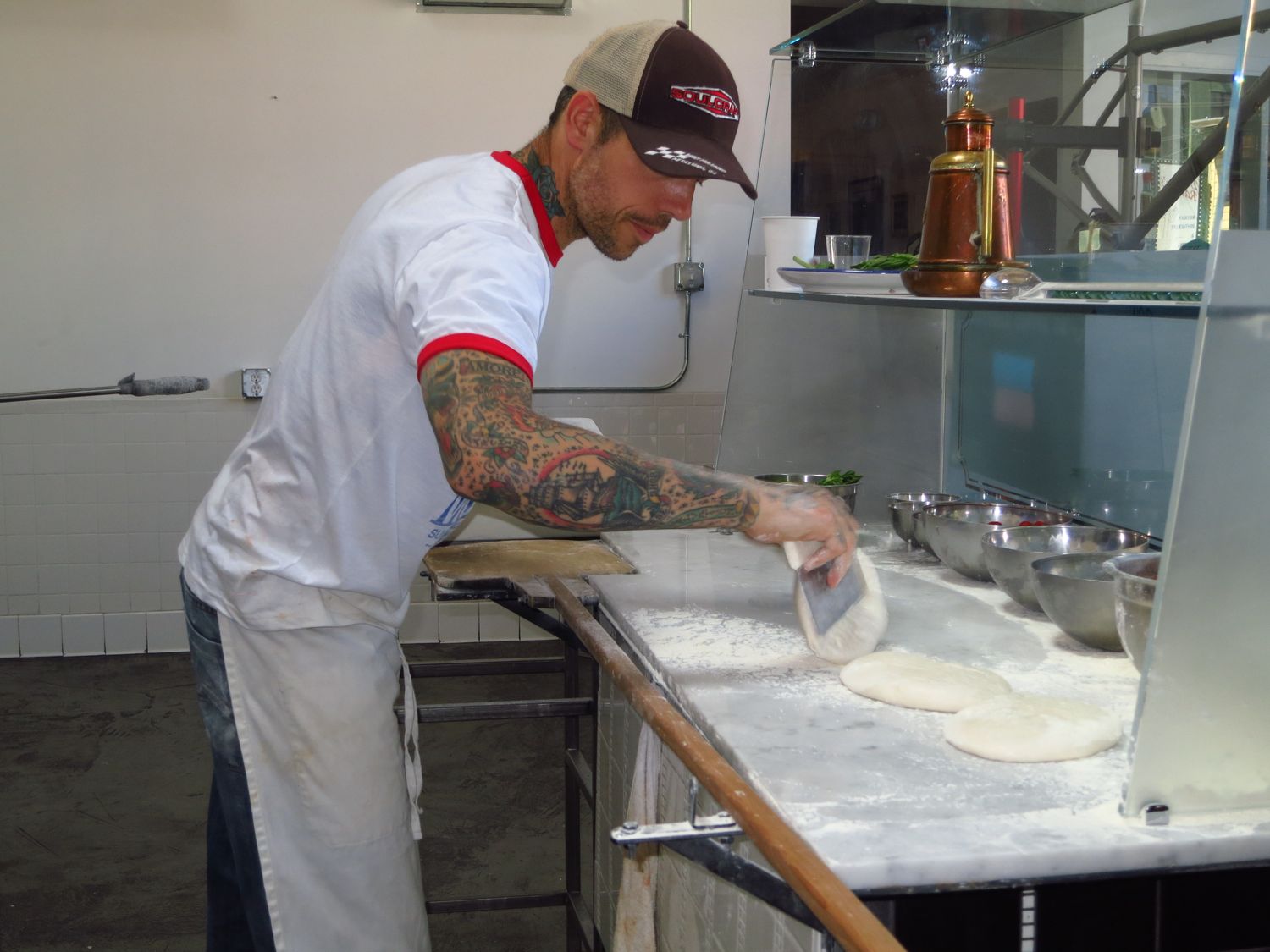 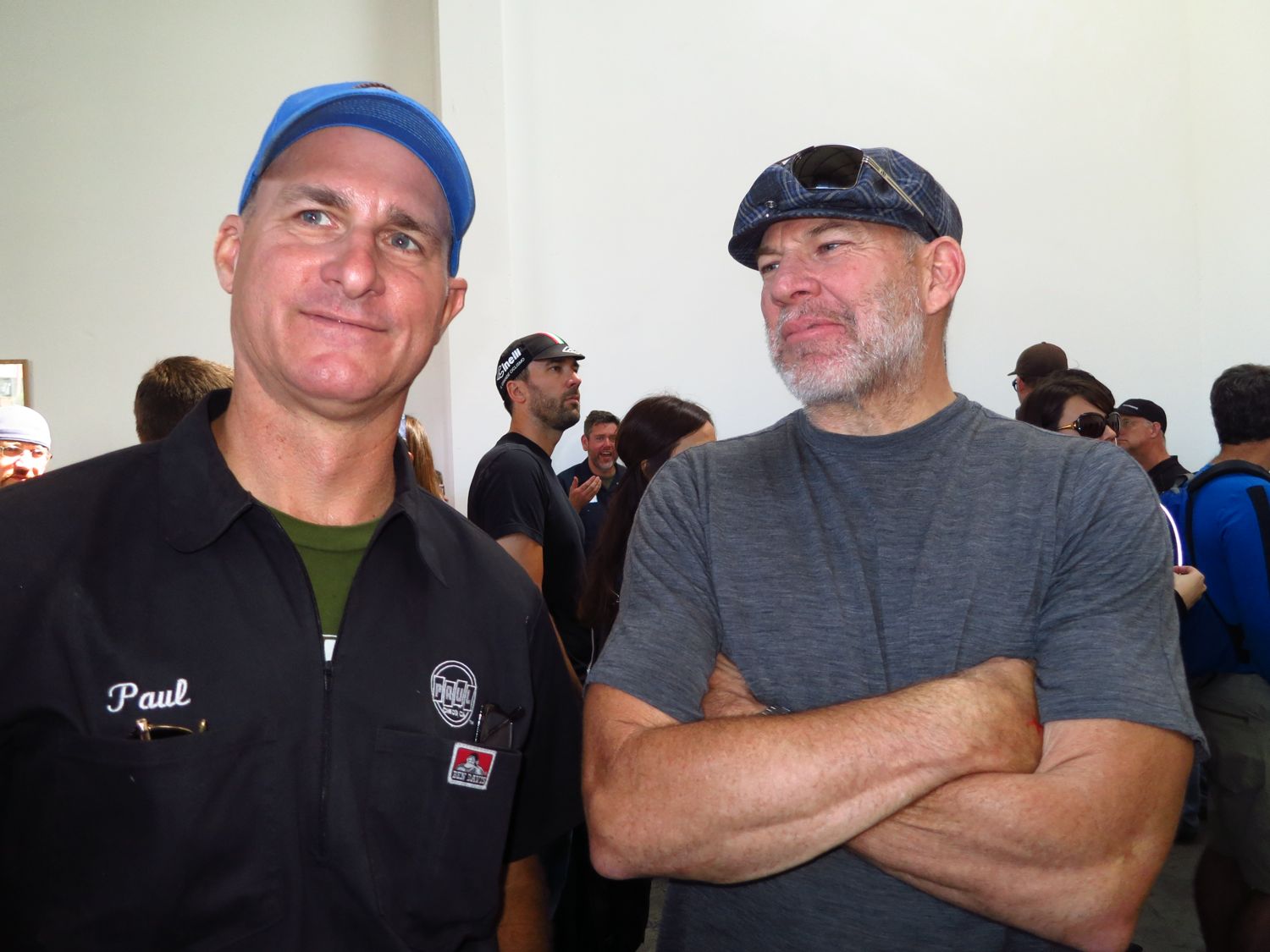 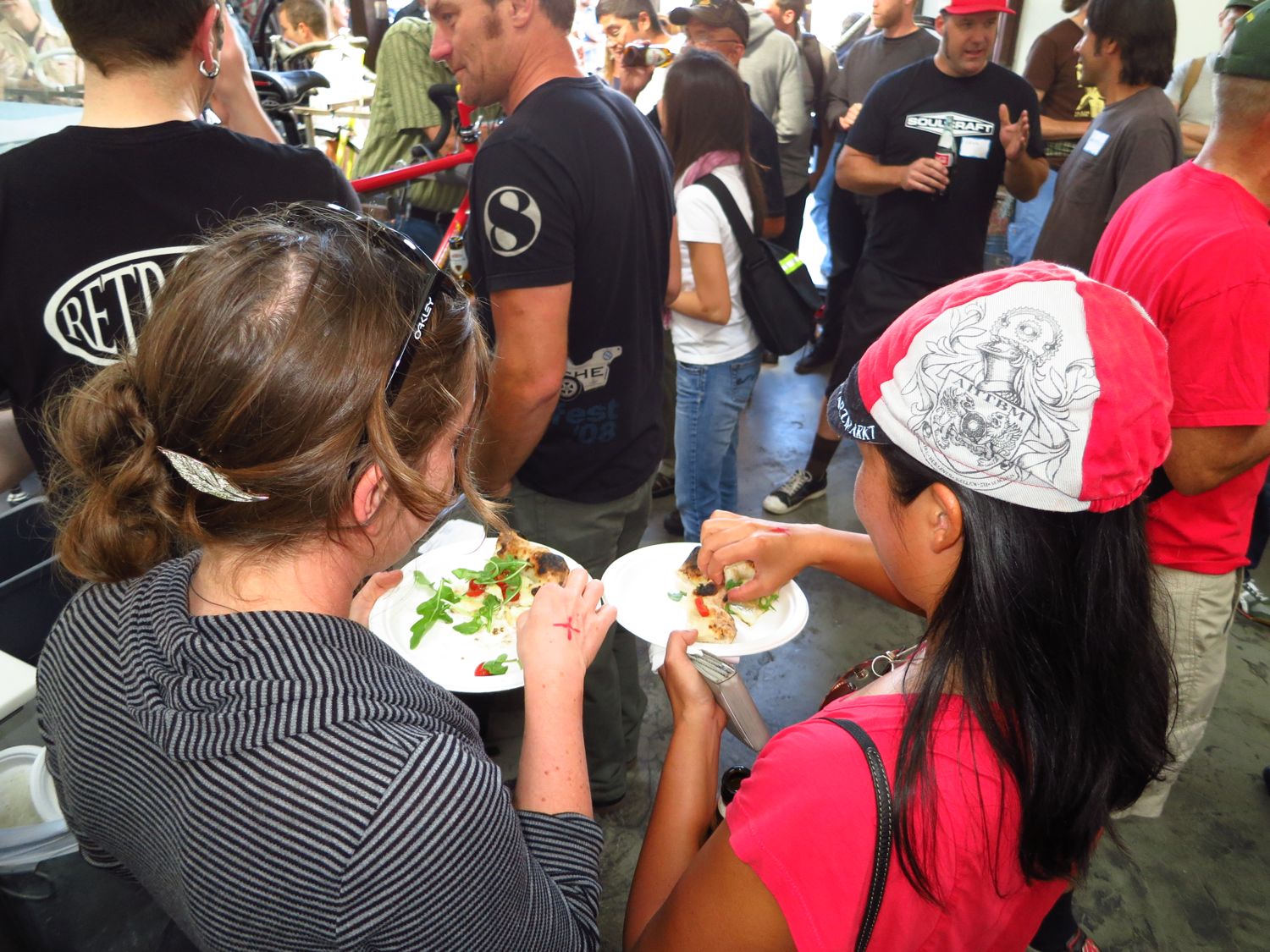 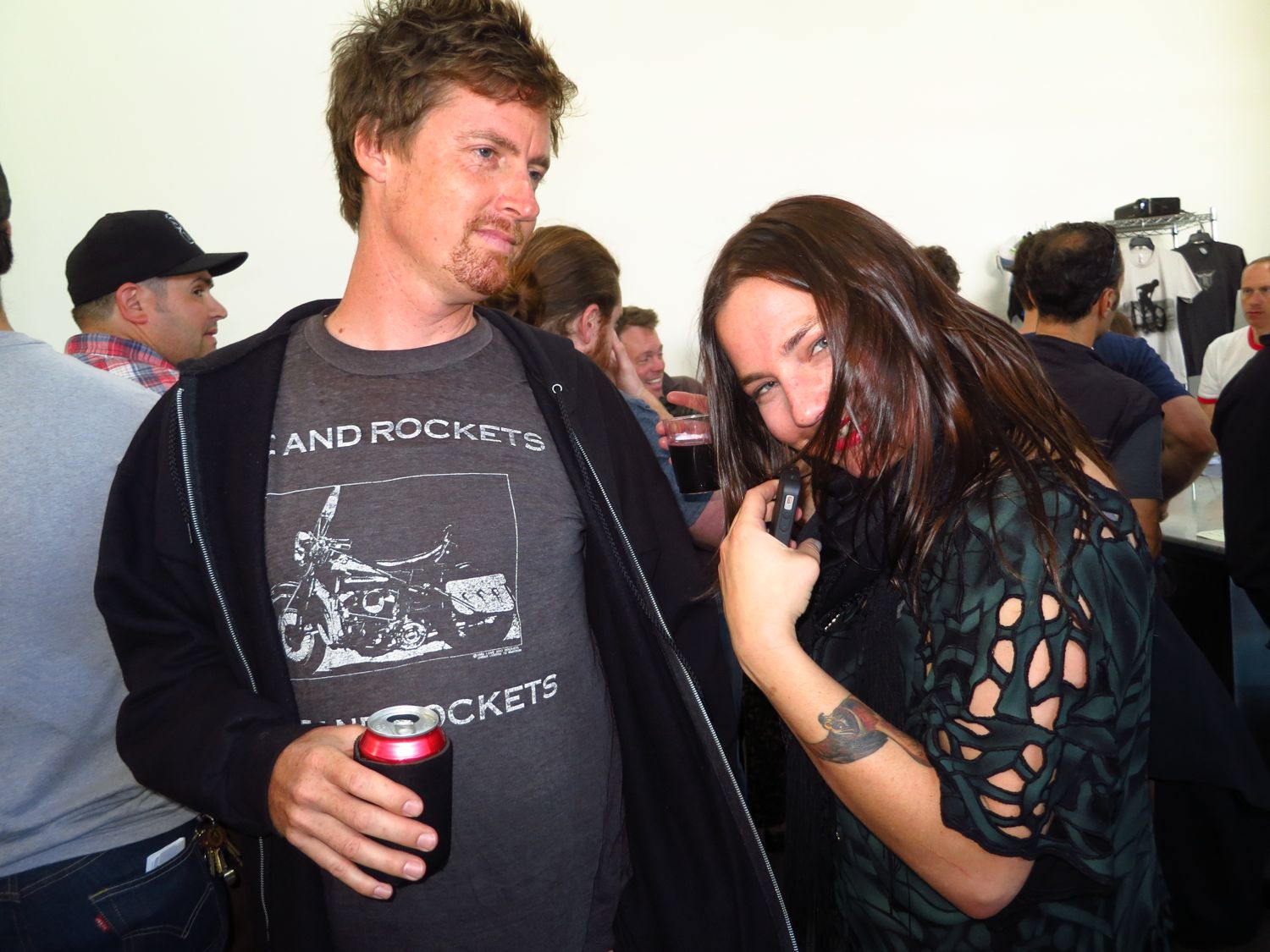 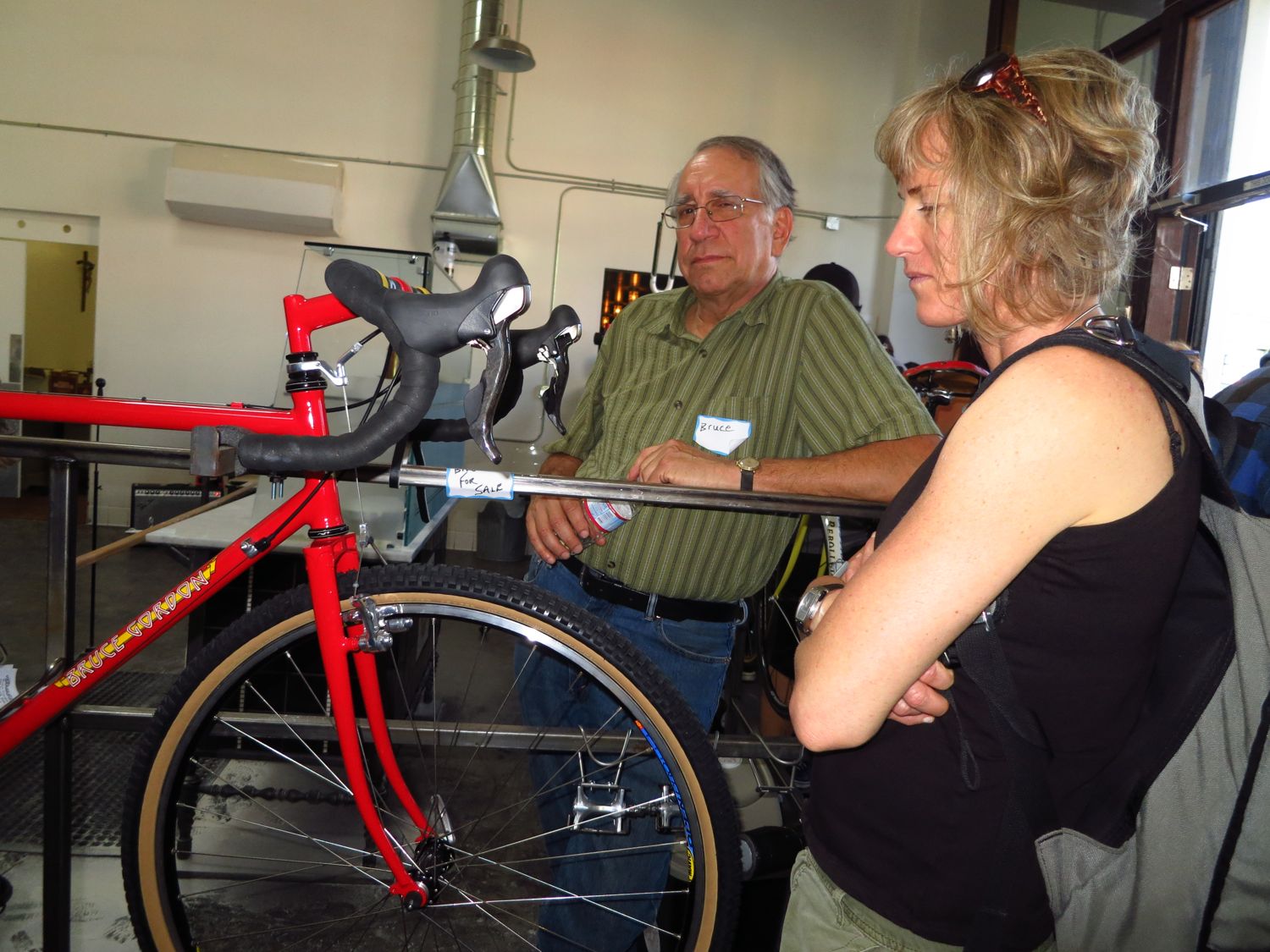 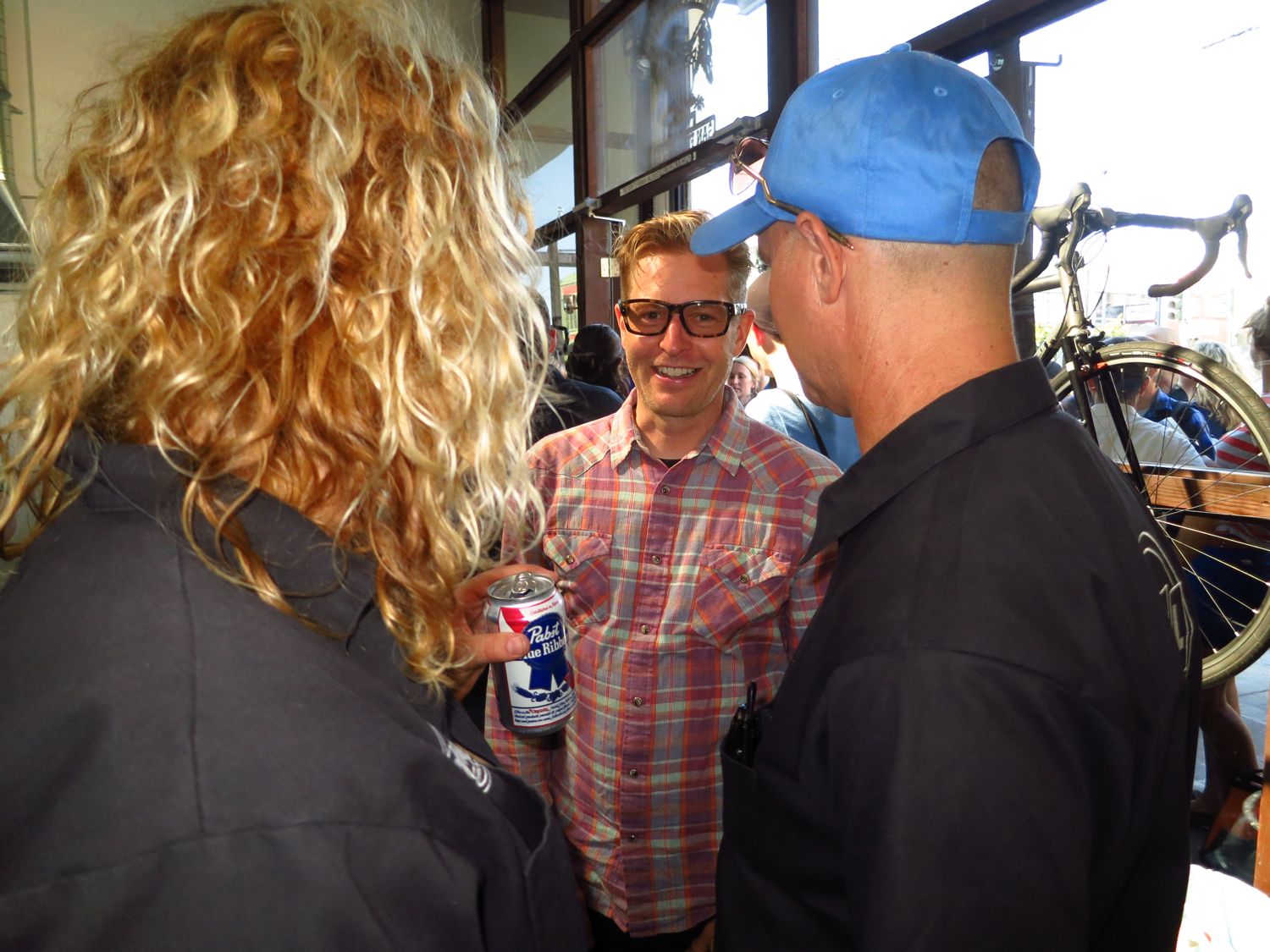 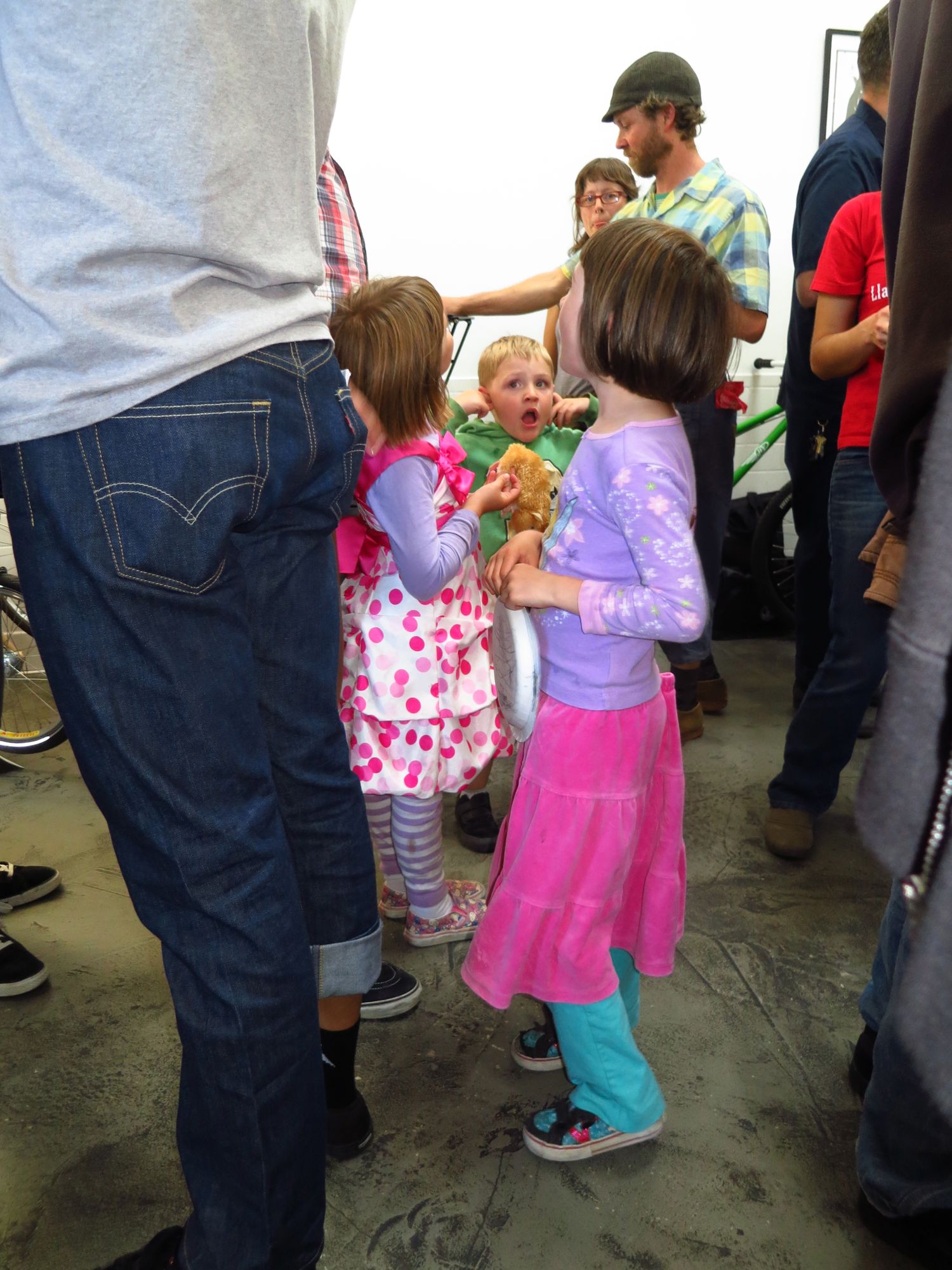 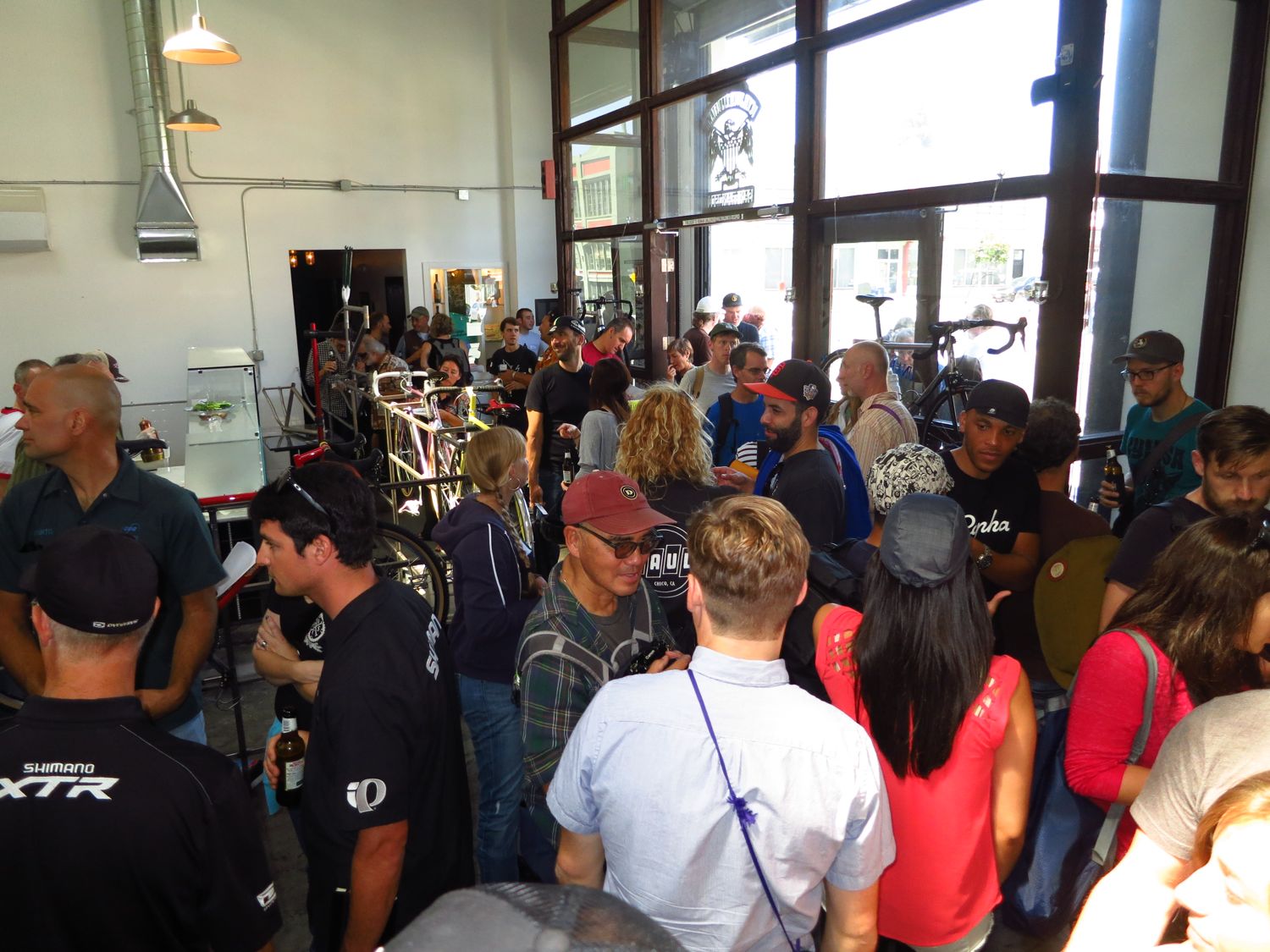 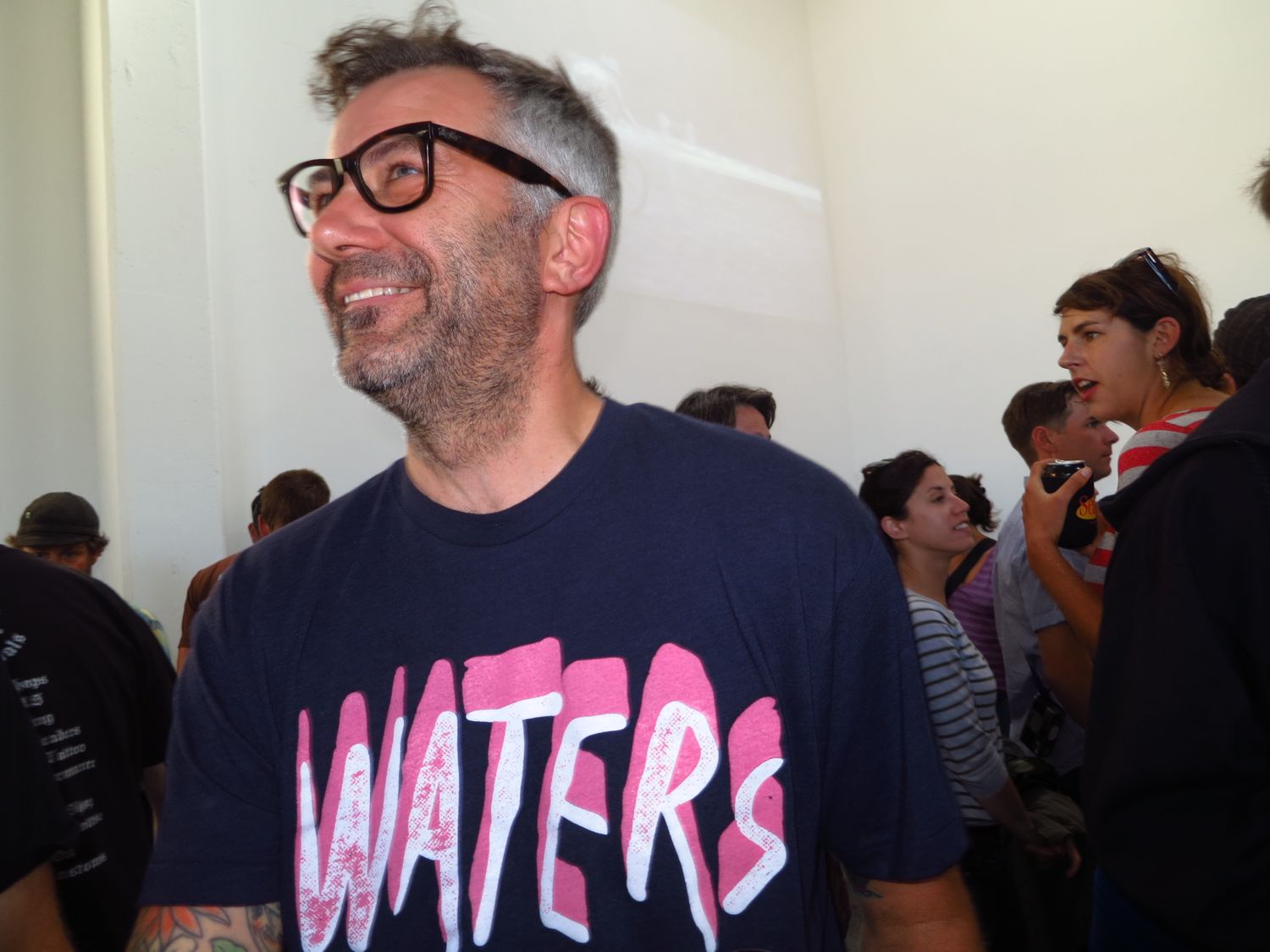 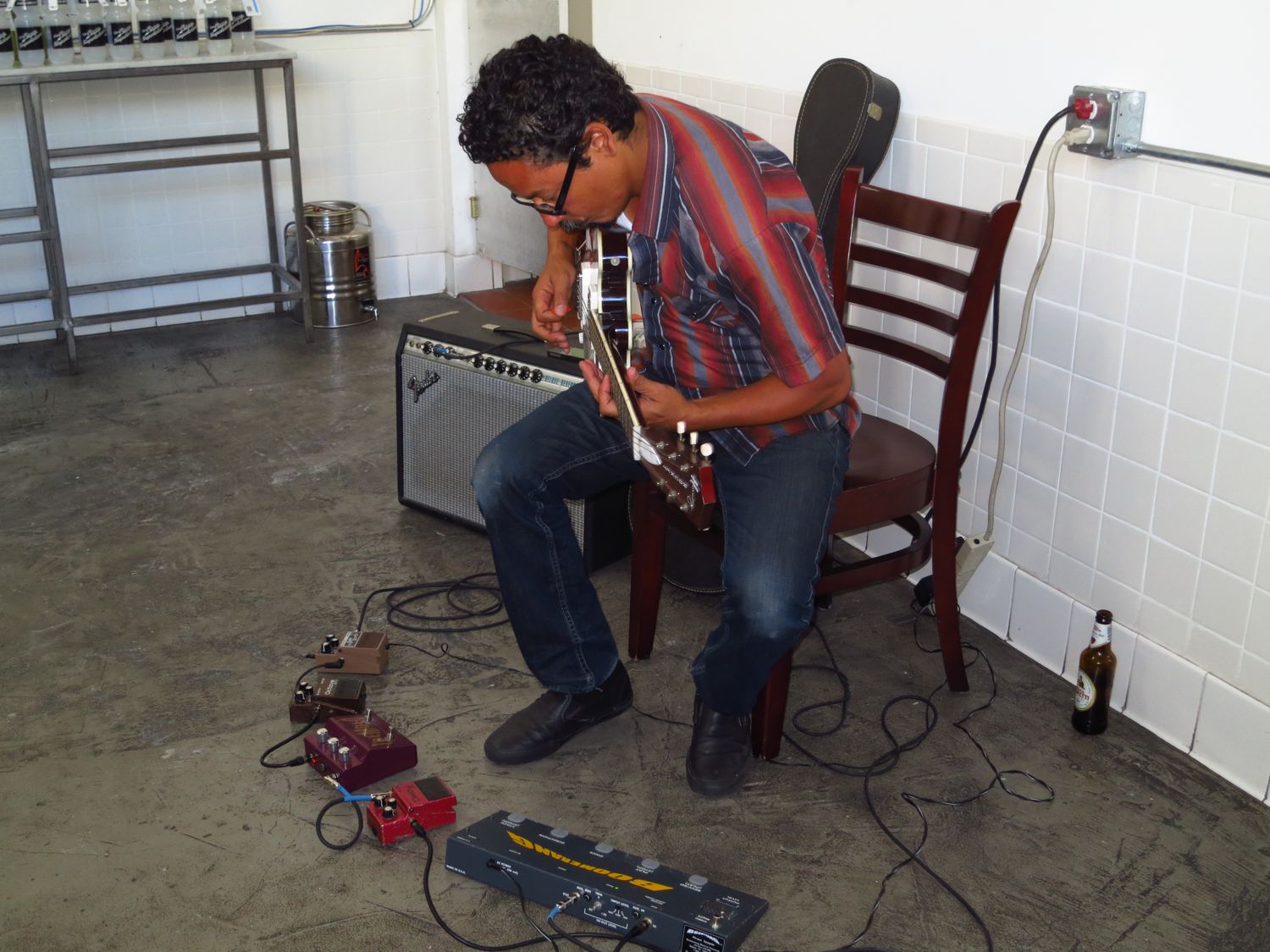 Finally at the event’s conclusion and as the masses dissipated into the evening, the lot of us made our way to find some desperately needed sustenance which came in the form of a Mexican feast. Our heads were filled with visions of hand crafted bicycles and the painstaking artistry involved in bringing them to life.

It was a day consisting of friendly people and fun conversation about a wide array of topics.

Not the least of which was mountain biking.

23 Responses to “Because who don’t like things about mountain bikecycles and stuff?”