Like I stated last week, I find it troublesome to consistently capture the tops of my subject’s heads, often times resulting in a loss of what in the image is truly spectacular. In this case, it was M.A.’s unstoppable natural.

Anyway, I just have to keep trying and perhaps eventually I’ll get it right.

First things first, I have an alert to any and all who might reside around the D.C. area. It would seem that The Cycle Jerk (not to be confused with The Bike Jerks) ran into some trouble recently when bad people made off with his roof rack;

After reading his account, my hope for humanity dropped another notch, and I throw myself on the mercy of our community to please keep your eyes peeled for anything that might lead to its return.

With the fancy footwork of thoughtful individuals recently working diligently to get some stolen bikes back, (three stories about which can be read here or here or watched over here) I’m hopeful that the lot of us can assist in the rack’s return home.

I mean, he may be a Cycle Jerk, but with videos like this one of his little girl’s first bike ride, it’s hard not to do everything we can to help a brother out;

In news having nothing to do with stolen goods or cherubic babies, Malcolm got in touch with some info that will assuredly be of interest to anyone in or around Lincoln, Nebraska this weekend;

“Hey Stevil, greetings from your number one pirate fan in Japan.

Lets get right to the point, The Pirate Cycling league’s Gravel World Championship
is coming up, this August 18th in Lincoln, NE, are you in? All one needs to due is send in a post card (or just show up at check-in) and be ready to ride (a lot of) NE gravel and have an even better time.

Here are the details.

And, if you want to bring your ‘A’ game, you could even win the sweet, UCI endorse (not) Pink PCL World Championship jersey; 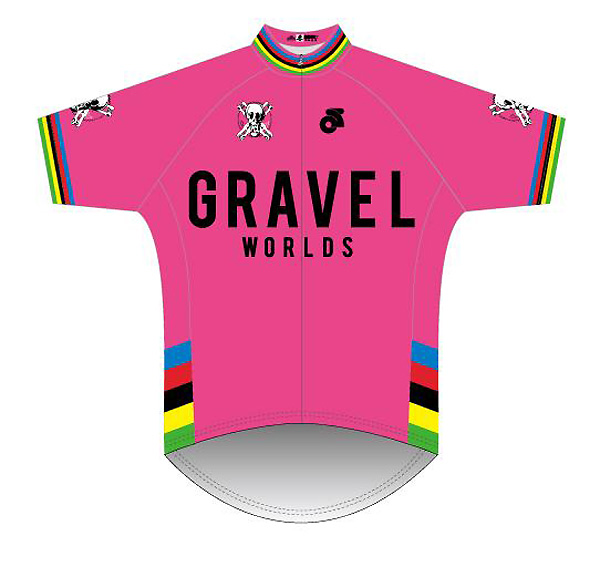 and while I personally like Rapha, I think we will all agree, that ours is way more ‘epic’. (does the use of epic in quotes help to negate its triteness?). Spread the word, and hope to see y’ll out there on the gravel. Arrggg!

That is one of about two pink jerseys I would wear with pride.

As long as we’re discussing jerseys, I should include a correspondence I received from Neil over at Maximo Supremo residents, Cedar Cycling;

“Hey Stevil – we’re running a deal on our sweet-ass, ultra soft, 100% merino wool, 100% made in California base layers. They’re sewn just down the road from you in San Leandro. You can do a lot of in these – ride your bicycling machine, drink beer, get drunk, pass out, wake up covered in your filth, then do it all again the fourth night in a row without being smelly because you’re wearing the magic of merino wool. 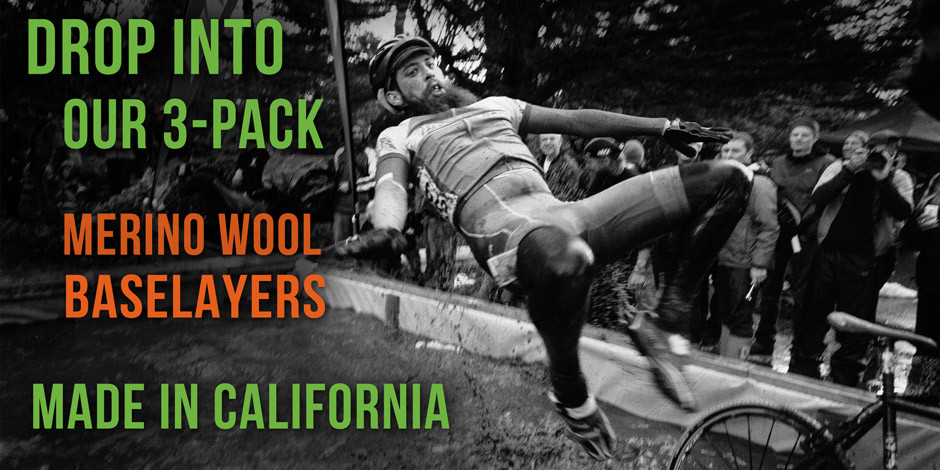 $175 gets you three base layers, in black or cream colors shipped to your American doorstep. Made in California by Cedar Cycling. Pick up an extra for the man or lady in your life since you’re 110% guaranteed* to get more action in merino wool.

I’ve got one of these and I will concur that they are indeed, the shiz. One of my very favorite items from the old Swobo collection was our baselayer, and now that I have gone and ruined most of those that I had, I’m happy to have found a suitable replacement.

On a chilly morning, a wool baselayer, lycra jersey and vest always seems to be the perfect combination.

Oh, and some sort of something on my bottom half as well… No ‘Donald Ducking‘ it for this cowboy; And speaking of no pants, Murphy Mack is the fellow who brought us last year’s S.S.C.X.W.C. Or is that the C.X.S.S.W.C.? Anyway, he sent me an email about some madness he’s got brewing up in California’s Bigfoot country;

I’m on the hunt for more entries for my Mendocino Weekend event Aug 24-26. Would you mind giving me a bump on your end please?

I had to rent out the entire park to be able to do the race and event and the cabins and cleaning fee cost me a ton. I could use some more entires to try to make some more of that back; 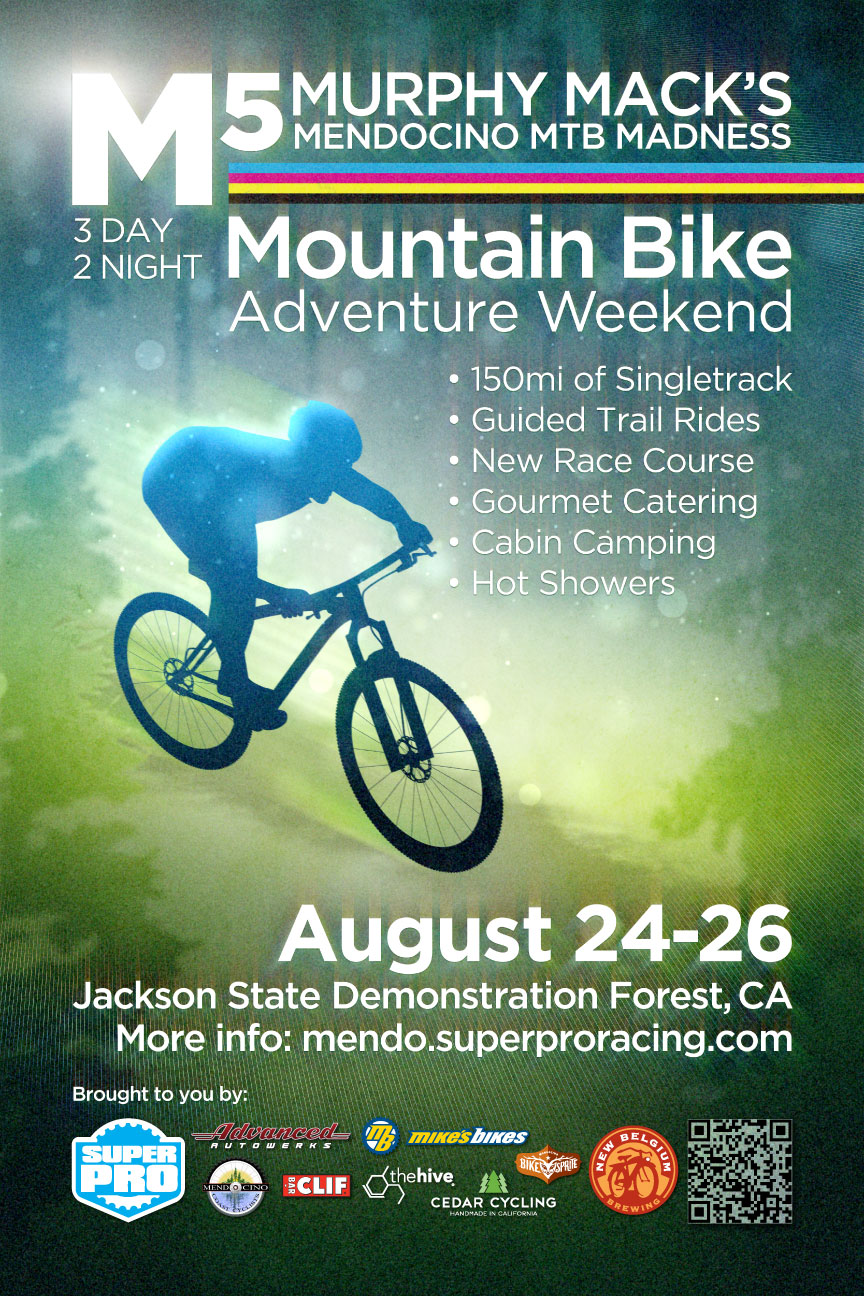 I know you’ve got a really good reach and would appreciate it.
From our last conversation it seems you won’t be able to make it. Come up there with me another time and you can see all the super fun trails they’ve built.

Besides spending his days pantless, Murphy’s hobby is being organized to a fault and putting on pretty damned excellent events. Get in on this one and see for yourselves.

Now let’s saunter back into other news relating to dirt worthy and road-esque bikecycles. Since cyclocross season is almost upon us (and with that, ample opportunity to be inundated with months of people posting photos of themselves racing poorly), I decided that it was time to do a little upkeep on one of mine. It was at last weekend’s pizza bike show when I met a fellow named David who happens to be the mastermind behind these little goodies; The uninitiated might be saying “whazzat?“, but the keen observer could possibly conclude that these are in fact sealed housing ferrules; (I know… I shoulda totally gotten the gold ones.)

David gave me a super pitch about these and before I knew what hit me, I was throwing the shrapnel in my pocket at him. Kindly, he refused any monetary compensation and handed me a set to try out. I opted to drop them on my All City Nature Boy since it was this bike that got absolutely ravaged by last winter’s grit and grime. Naturally I started the process off by removing my old bar wrap, and since that was off, I decided on replacing it with some luxurious white Cinelli gel tape.

Why white you ask? Because I’m a champion.

For a few days I had noticed a red tag hanging out of the bottom of my left brake lever. Unable to pull it through, I finally got around to fishing it out through the top, only to realize that I had somehow procured a small piece of snow fence during last week’s stunt show into the thicket of blackberry thorns; Anyway, as I put the finishing touches on the bike, I capped it off (no pun intended) with the Pimp Crimp®; All of this effort might mean a number of things for my upcoming season, with the exception of an adjustment to my personal suck knob, which is hopelessly and forever stuck on eleven. I might be peerless in my mediocrity as a bike racer, but my bike will be looking (and stopping) like a million bucks beneath me; Finally, I will make yet another announcement regarding the upcoming Underbike Industry Mixer© which is set to take place in just a few weeks’ time. Inspired by the imminent trainwreck that it will surely become, I have once again gotten busy with the Photoshops and created a new flyer which took less time to make than it did for said program to load; 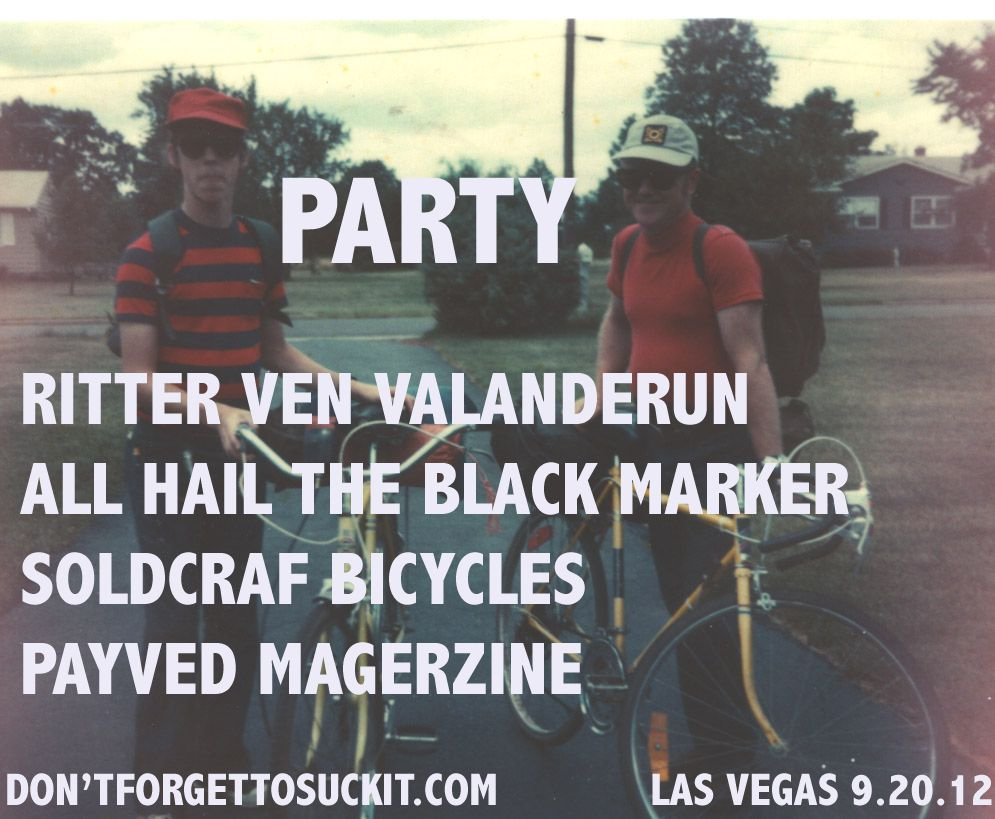 I’ve neglected to mention that, like in the three year’s previous, wearing a wig is highly recommended. A few folks have asked what the wig theme is all about, which simply is a tribute to the S.O.P.W.A.M.T.O.S. parties of yesteryear.

It was a time when I was first brought under the wing of folks like Bruce Gordon, Mark Norstad, and a host of other Northern California bicycle luminaries. “Why are you wearing wigs?” was assuredly a question asked of them, the answer to which has simply always been “why not?”

Buy one, steal one, or just pull the old one out that is stuffed beneath your sofa.

Just do what you gotta, though whether or not you simply borrow M.A.’s afro is totally between you and her.

18 Responses to “Another day, another doll hair.”