“Whatever it is we have to discuss, I’ve got about this much attention span for it.” You totally thought I was gonna make a penis joke.

Welp, after the last several days of world class ass-grabbing and nonsensering about, I have found that I have an abundance of random bits and pieces to post for your consideration.

The first one (naturally) having nothing to do with either bikes (so the sender claims) or tennis balls, but rather a person down here in the trenches with us doing a very good thing indeed;

This is not about bikes but it is important to me and I bought a whole bunch of your shit last winter.

9 out of 10 pregnancies with Down syndrome are aborted. Of course, 52% of those are because they realized Cheever was the father and another 6% were the result of the erythropoietin in Lance Armstrong’s frozen semen. My friends in Austin were the 1 in 10 who said if Cadel Evans could win the tour de france despite a hugh wind resistant cleft in his chin, we can do this, and their daughter is amazing.

What is more amazing is that rather than drink rubbing alcohol, they created a non profit to give post secondary school scholarships to adults with Down syndrome. Applicants include people interested in business, zoology, the culinary arts — I even saw a video of one guy doing the worm who has been accepted to a prominent university’s performing arts college. I can’t share that video for privacy reasons, but it is much closer to Turbo’s Broom Dance than Jean Claude.

Adults with Down syndrome know how to party and should have the same opportunity to make drunken college mistakes as the rest of us. But even with a bowling fundraiser next weekend in Austin, they may fall just short of their goal of 5 scholarships, meaning someone is going to miss out. Do we want adults with Down syndrome to go to college to learn job skills, independence, and party like the rest of us? Or do we want that to be exclusively the domain of people with handed down Beemers attending Bard? We aren’t running a marathon, nor are we riding a charity ride. We’re fucking bowling.

If you or anyone you know has some change to spare or who has been affected by these vibrant human beings, they can donate to my team The Bowlbarians.

To sweeten the “I don’t know you in person and this has nothing to do with bicycles deal,” if I get more than $6.66 from the tangled web of horseshit existence you weave I will personally attend Joel Osteen’s megachurch in Houston, take a giant dump, take a photo of it, and leave it without flushing.

Firstly, from my perspective, this has everything to do with bicycles, because we (you, me, and the other two people reading this. Hi Mom and Dad!) are the ones communicating about this topic, and we are bicyclerists.

Secondly, if the goal is reached, I would prefer a shot of an upper decker.

Let’s see if we can’t make this happen, shall we? Why, of course you assuredly remember last year’s show and the report that followed. (I hope you do, because I don’t). What I do recall was chasing Steve Potts around the room trying to convince him that I was his illegitimate love child, whilst packing three in the chamber.

I also remember that the post in question was the one where the following video debuted;

They were truly the best of times and the worst of times.

Anyway, if you like your bikes like you like your pizza, (handcrafted and covered with artisanal cheeses), then mark your calendars and swing by to soak up some sights, sounds, smells, and savoriness.

Oh and while we are on the topic of all four, unless you’ve been hanging out under a rock, you have certainly caught wind of my upcoming Underbike Industry Mixer© which will be happening next month in Las Vegas, Nevada.

Because there are consistantly a few people who ask if this function is invite only (which is always followed with response along the lines of “what kind of douchebag do you take me for?“, I opted to make a flyer just for the express purpose of answering that specific question; 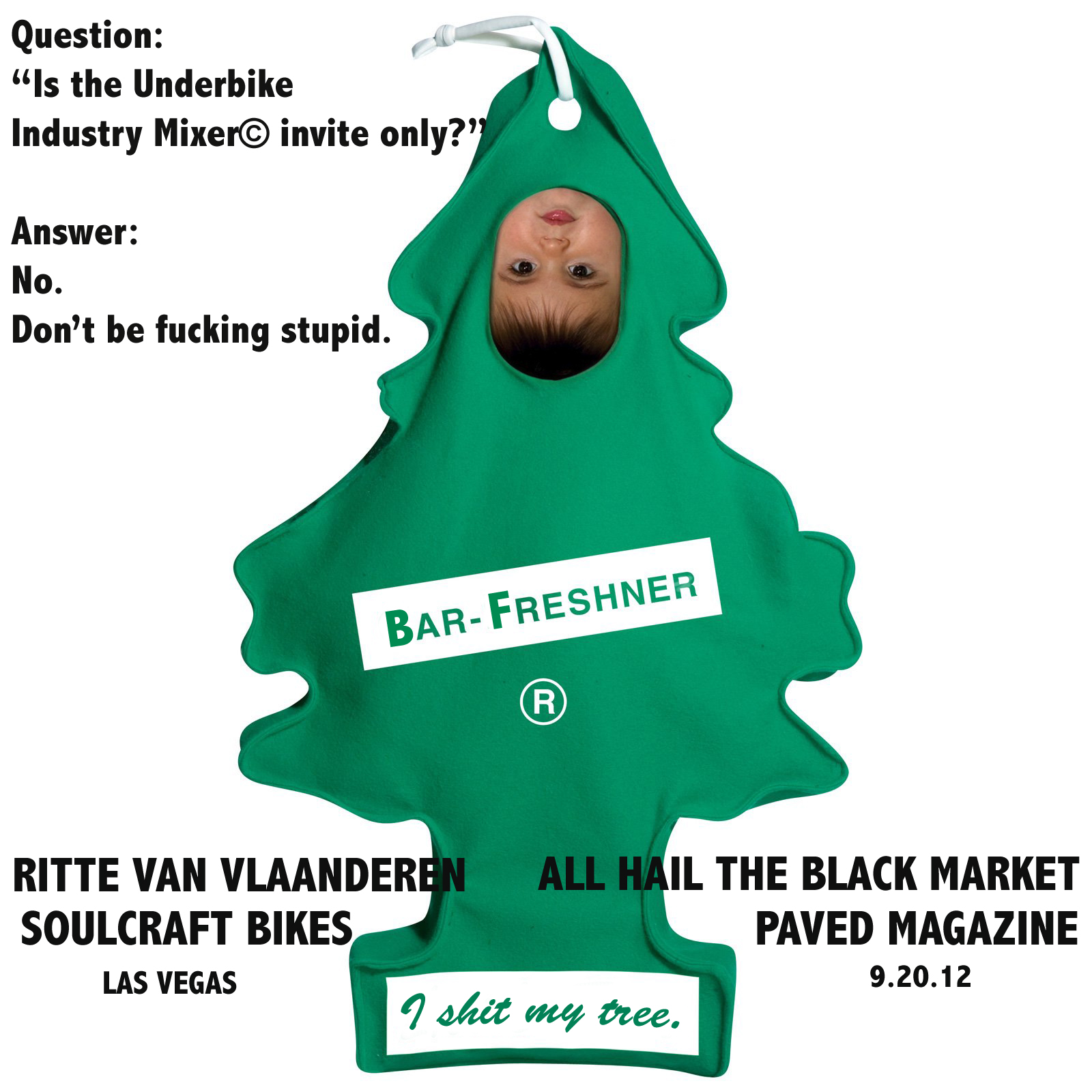 And for those who think you know what we’ve got up our sleeve, you don’t

And speaking of sleeves, Backyard Blamanda has some and she used the fingers at the end of them to send me the following notification;

“Can you post this? It’s going to be Bad Ass…. promise” 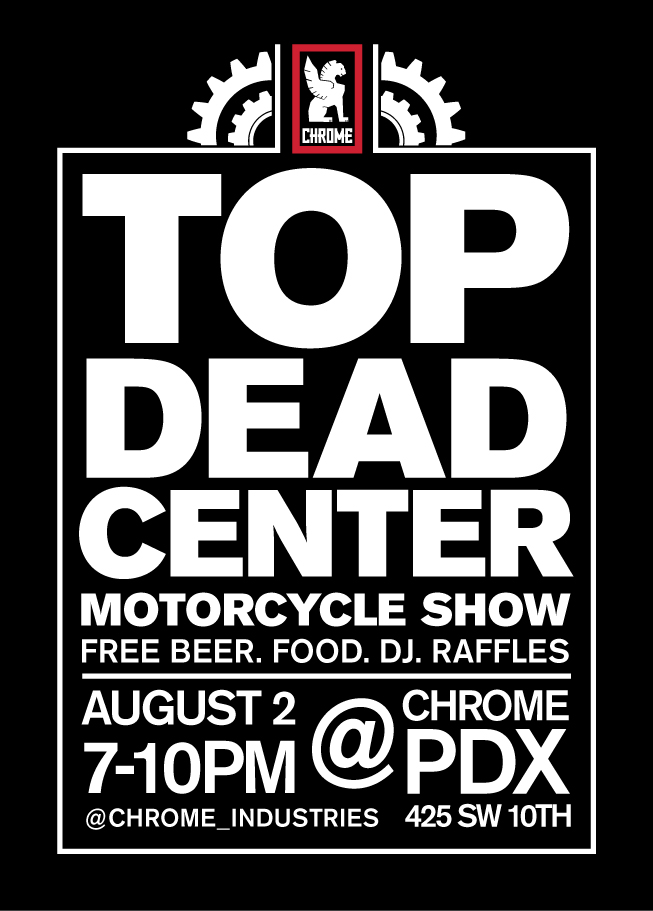 Secondly, also from Minneapolis West, the kids who go in circles have a whole lotta shaking going on in the upcoming PDW/Alpinerose Track Omnium; 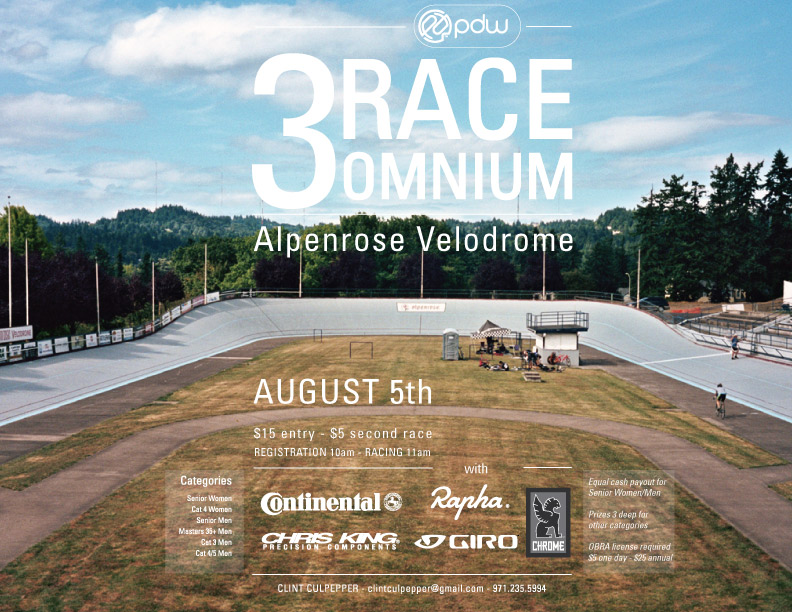 And then speaking of speaking of things, in final news out of Minneapolis West, Case from Maximo Supremo residents Rubena Tires recently set me up with some of their wares for my Hunter brand twenter-ninering mountain bikecycle; 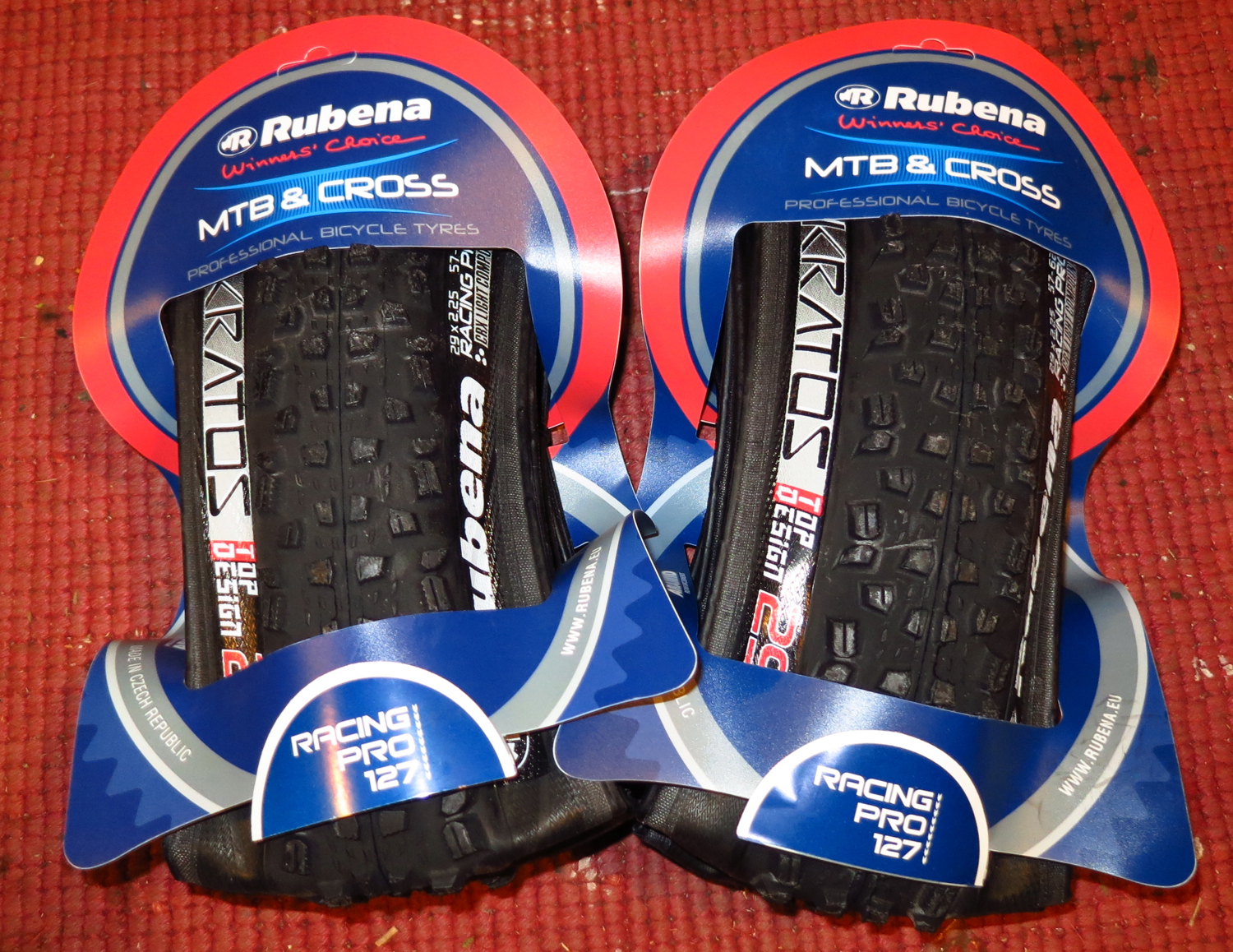 Having been traveling and/or injured for a majority of time since their arrival, it’s taken a span of time for me to finally throw these on, but I recently got my act together and if I don’t miss my guess, I may have found a suitable replacement for my beloved WTB Bronson/Panaracer Rampage combo.

At 2.25, the set falls in the middle of my preferred size combination (2.35 up front and 2.2 in the back) but at 650 grams, they are individually 150 grams lighter than my Panaracer and 50 grams lighter than my WTBs (if you care about such things, which I don’t). They are considerably more XC-ie than what I have become accustomed to running, but despite their feather weight, have what appears to be a über durable sidewall.

And while we’re on the topic, there were no clear markings on them to indicate direction, so I relied on the old trick of putting what looked to be the front tire on like so; 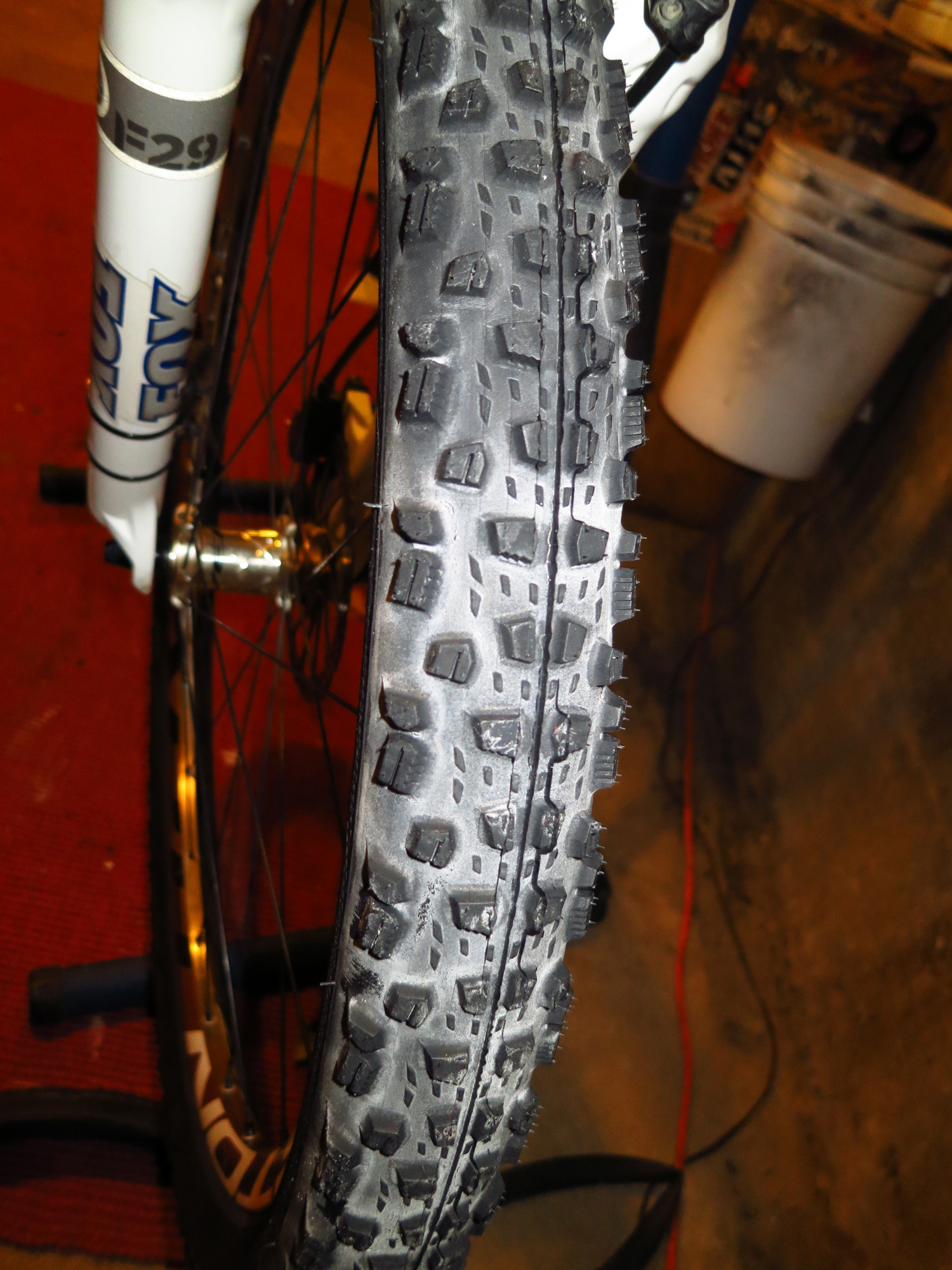 And simply making the reverse decision for the rear;

Of course paying attention to such things reminds me of a fellow named Danny Norton. He was the one responsible for originally pouring gas on the mountain bike flame that was smoldering beneath me back in 1989. He would ride ill-fitting bikes with bald tires faster than nearly anyone I’ve ever met, which always reconfirmed that it wasn’t the vehicle, but rather the pilot where the magic happened.

While I’m fussing about with tire direction, Danny would be riding with booted slicks, hiking boots, and a rigid aluminum fork and still hand my ass to me, so my perspective is null and void.

Anyway, I should have some more complete thoughts on the skins as the weeks pass, but I’d like to thank Case and Rubena for putting their faith in my ineptitude and sending the pair on.

Despite my laundry list of physical afflictions, I was still able to recently muster the energy to don a fist full of cowbells and attack a competitor in the recent Midsummer Night’s Cross race;

Note the fine form, regardless of the fact that my pants were falling down.

Many thanks to Sarai and Kevin for bringing animation to my shame.

Please feel free to relate that to a penis joke in any way you wish.

8 Responses to “Now that we have that taken care of, let’s attend to some business.”