And with this blessing, it is our duty as decent human beings to share the wealth.

Todd Trainer of the musical act, Shellac of North America certainly feels this way, as he and Geno hatched a plan some months ago after Todd had upended his house. During the process he decided that a number of posters from his expansive collection had to go; 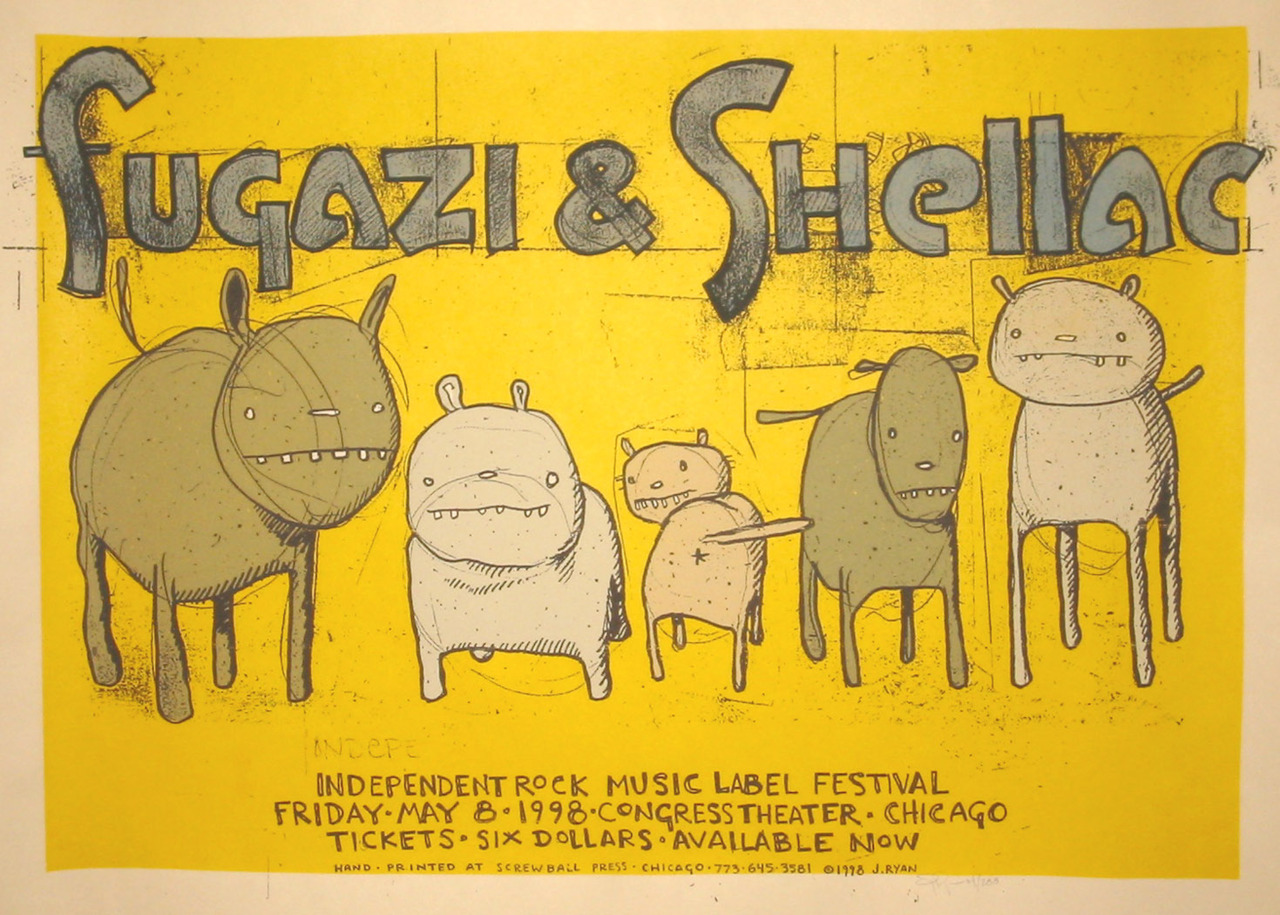 We’ve spoken on the phone about the matter and he was insistent that selling off the posters wasn’t a financially motivated decision, but really that he just wanted to purge his collection and for the posters to end up in appreciative homes. It was then that we opted to have a silent auction at One On One in conjunction with Shellac’s twenty year anniversary show at First Ave. later that evening; 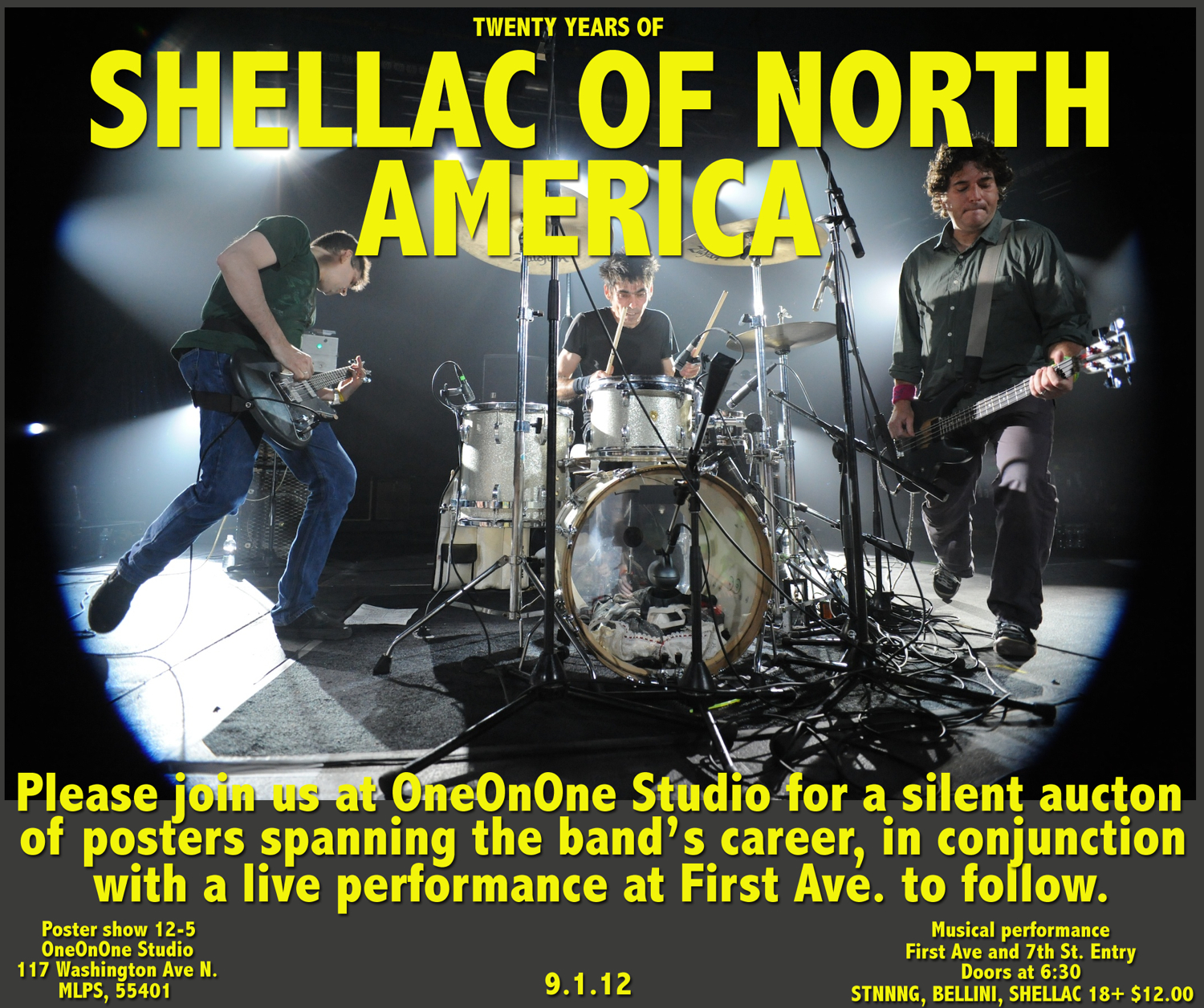 I have been enlisted to curate the installation, (I guess because like, I went to art school, and stuff.) What this means is I will stand smugly in the corner and glare disapprovingly around the room as I direct other people to do things.

Anyway, this is another very exciting opportunity that Shellac has offered me and if you are in the area come the first of September and find yourself in the market for some limited edition visual fodder celebrating a damn fine band, then you should mark your calendars.

Then, if that weren’t enough, the one time hosts of the 2000 S.S.W.C., and next year’s hosts of S.S.U.S.A. have an event the following day which will most likely lead to some sore knees, and swollen livers; 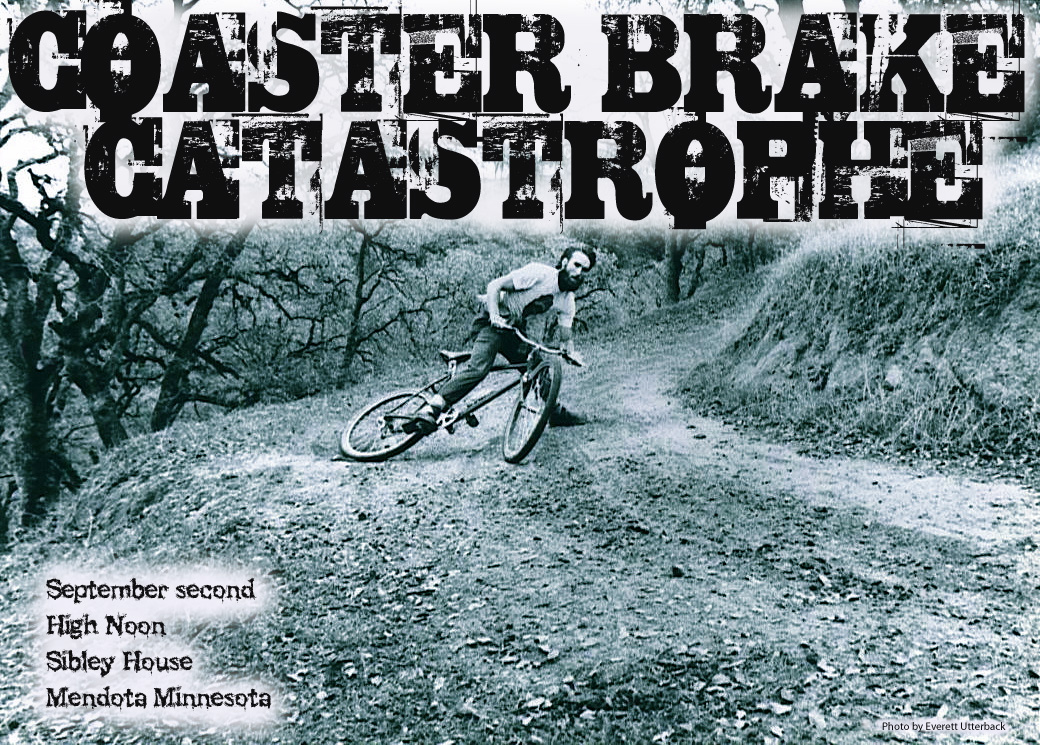 Get your Shop Bikes shined up, grab a stick of Juicy Fruit.

In even more news somewhat relating to Portland East, I received a first hand account of this past weekend’s Cycle Messenger World Championships from the bearded wonder and all around dirtbagger, Will Ansley, complete with a sweet shot of MLPS hotdog, SK;

“Yo Stevil, sorry this took so long, it’s been a very drunk/hungover week.

So, basically CMWC Chicago 2012 wasn’t until last Friday, technically, but everything started on Tuesday. Monday/Tuesday quite a few out-of-towners arrived, mostly from Japan and Canada. On Wednesday, because Chrome sucks, they had Squid (a really rad dude from NYC if you don’t know him, look him up) lead the ride. Having a guy from NYC unfamiliar leading a ride in Chicago makes tons of sense, I know.

Thursday was a Poker Run and movie night. I started the poker run pretty strong and did 3 of 5 checkpoints, but opted out when a close friend, and Wisconsin Fat Bike state champ, invited me over to drink a free keg which was donated by Lake Front Brewery.

After that, the whole weekend was a drunken mess. Scum City made a decent presence; 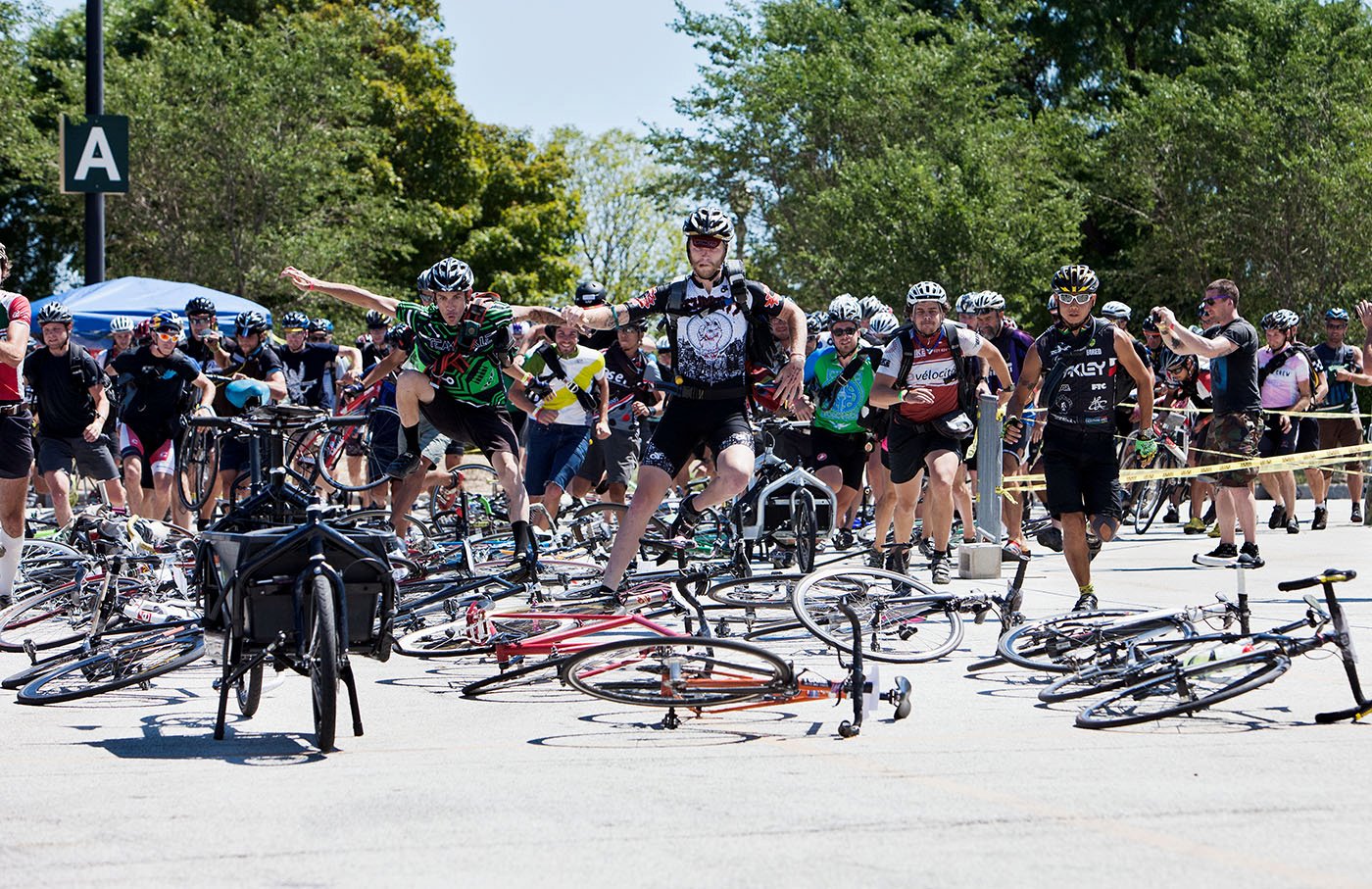 Photo courtesy of Pete D.
-and I feel good about it. Saturday was the Qualifier (which I did not, flatted) and Messenger Prom. My awesome girlfriend and I won messenger Prom King and Queen, and that’s pretty awesome. Usually Prom is reserved for the Cuttin’ Crew Classic every year in Chicago, but it was awesome to win a title like this in front of the whole messenger world; 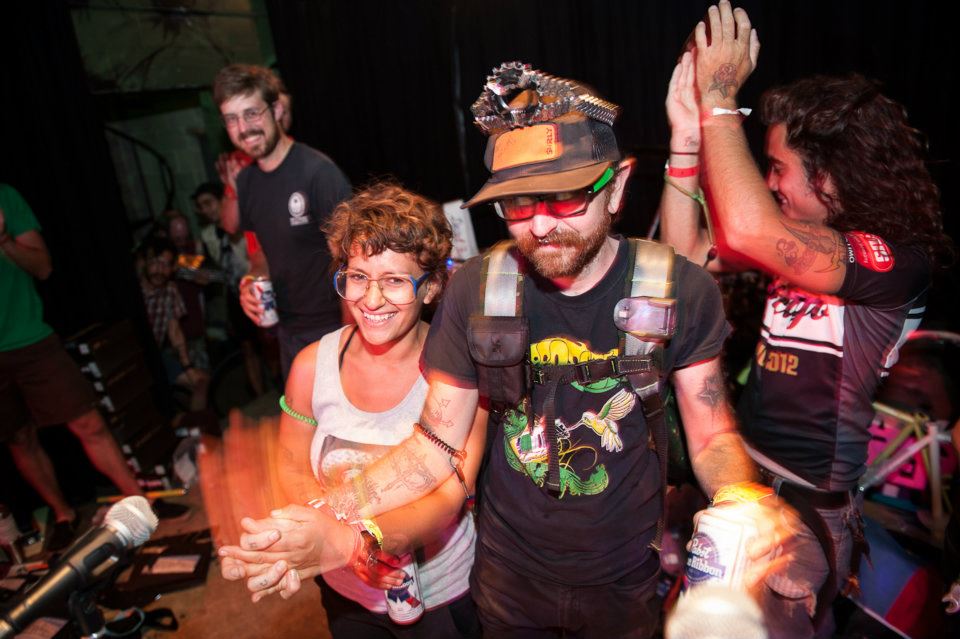 Photo courtesy of Christopher Dilts.
Sunday was the finals and congrats to Craig Etheridge and Josephine Reitzel for winning overall male and female; 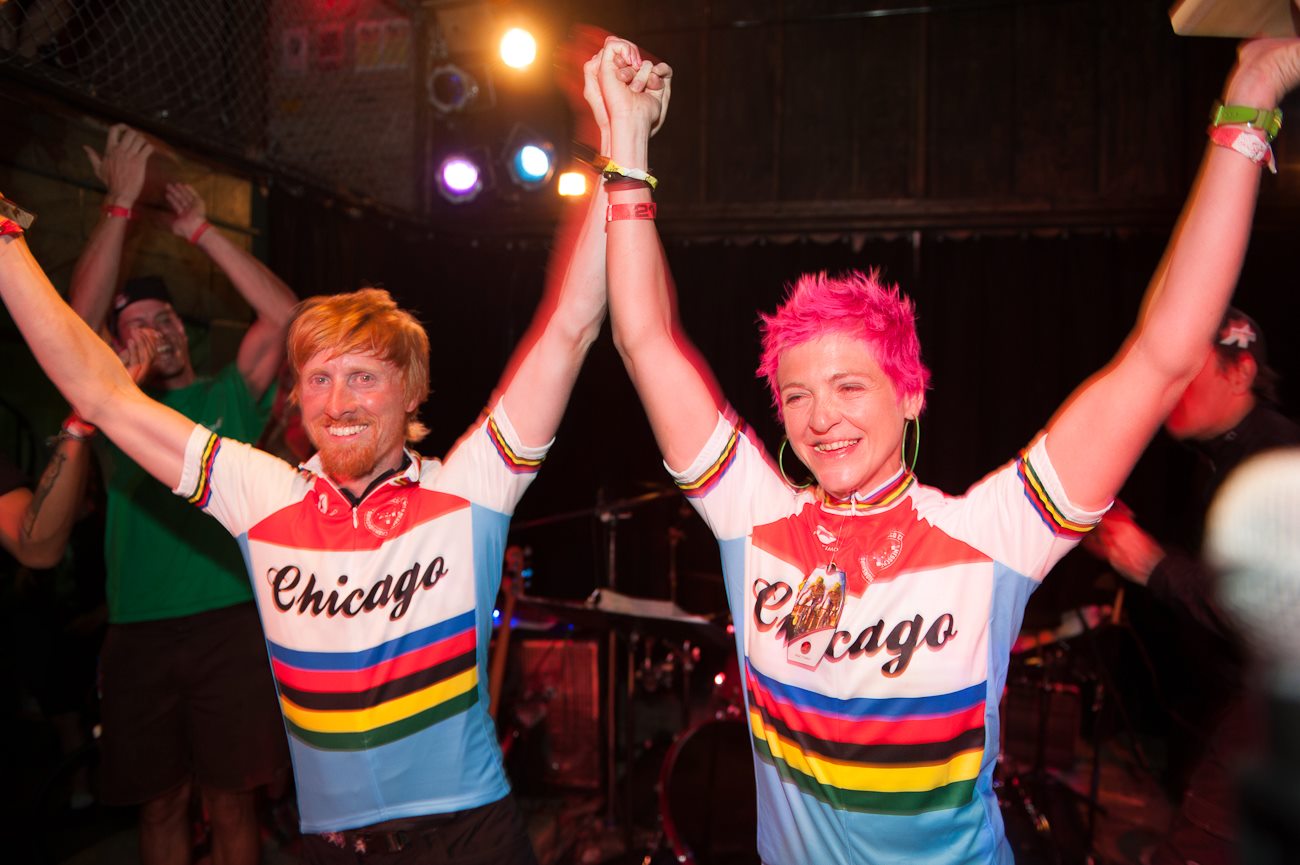 Photo courtesy of Christopher Dilts.
Last but not least, congrats to my dude SK from Minneapolis for winning biggest weiner; 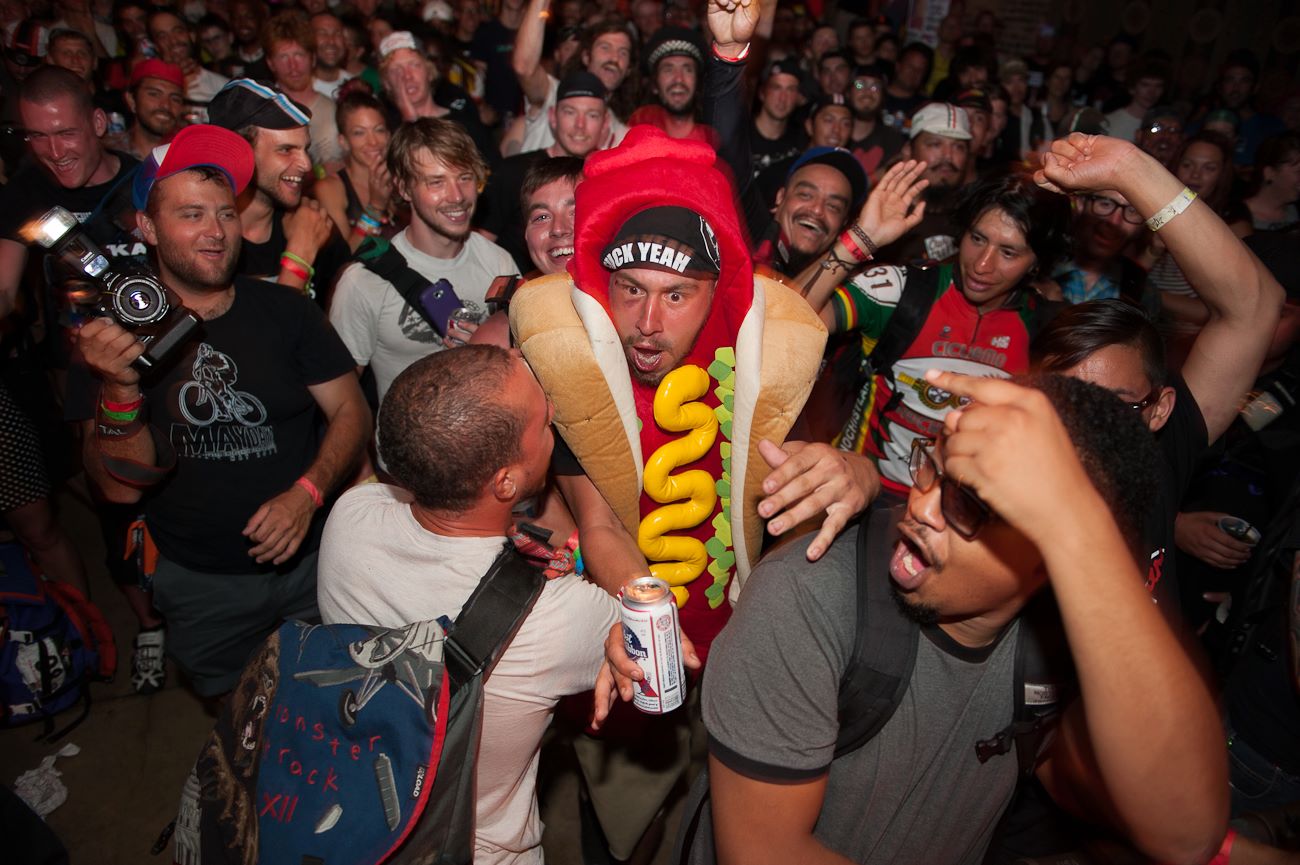 Will and I had been in regular communication regarding the possibility of me making it out to this, my first CMWC since 1996. I’d secured a place to stay, tracked down a bike to use and even had even gone so far to write the date on my calendar. Sadly, the medical industry had other plans for my pathetic bank account and waylaid me with an epic bill, which my kick ass health insurance refuses to touch, even with the ten foot pole that I pay them ungodly amounts of money for.

So I had to back out, with my head hung low.

Next year the race is slated to take place in Switzerland, and I’ve already begun cleaning out the sofa cushions (just kidding. I can’t even afford a sofa) in order to secure a trip there.

Though I guess we’ll have to see what the medical industry has in store for me then.

Now then… Dipping into the mail bag, I see that we have a communication from Jeremy to review;

Thanks for the shout-out for Blue Heron Bikes and pic of me getting Jedi’ed by Murph in your post about your bike shop tour a couple of weeks ago. As I mentioned, we’re having our grand opening party this weekend–any chance of getting it mentioned on AHTBM? It’ll be a great chance to hang out, have fun, and check out our line up of sweet commuters and kick-ass cargo bikes.

Still working on getting an interwebs site, so for now people can check out our facebook page.

If you have a thing for bikes that can carry other bikes, make it through.

Then from Taylor, I got an email about something near and dear to me;

Ran into this on a rock climbers forum; 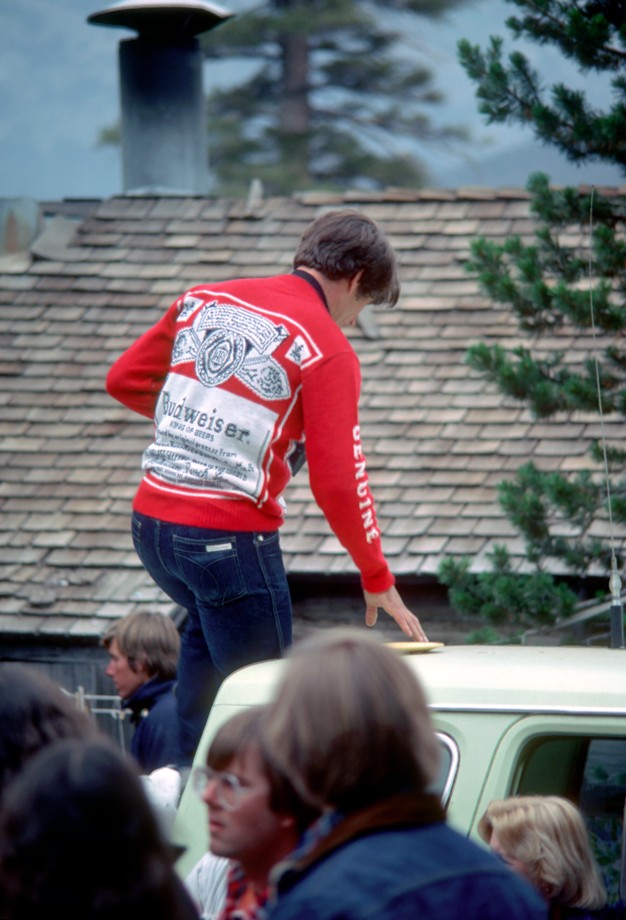 The subject of this butt shot is one Galen Rowell, a climber, legendary nature photographer, designer of bags before it was cool, and all around righteous dude known for doing things like smuggling photos of the Dalai Lama into Tibet. He unfortunately passed 10 years ago in a plane crash. The photo of him flying the red, white, and black was taken while while shooting fellow climber/photographer Vern Clevenger’s wedding around 1980 or so.

I’d close with a shitty comment about urban outfitters, but lately I’m trying to remember that life is too short for stuff like that.

I appreciate Taylor taking the time to send this and for taking the high road with his philosophy. It’s one we could all take a cue from.

As you might know, I have a Budweiser sweater I’ve long cherished. Unlike Taylor, I’m small and petty and have no problem telling U.O. to suckit for co-opting one of the only pretty things I own.

8 Responses to “We are pretty people who like pretty things.”