At this point, you know how the following story ends, (unless you don’t) so don’t bother watching the video. I just put it here for visual effect.


On Wednesday I used a coal mine metaphor to describe digging through the bits and pieces of correspondences that find their way to my email machine, but upon further reflection, I realized that there is nothing positive about working in such an environment. It seemed far more appropriate to describe it as harvesting unicorn kidneys from Candy Mountain.

But wouldn’t you know that, similar to mining, just when I thought the bounty had ended, I found a new vein to harvest, which I will continue to dump into the ore bucket thusly.

Back at the beginning of summer, Dan from Maximo Supremo residents The Nashville Bicycle Lounge wrote in with some truth that’s stranger than photoshop;

“Saw this on the ride to my dad’s for Fathers Day. Just couldn’t stop laughing.” 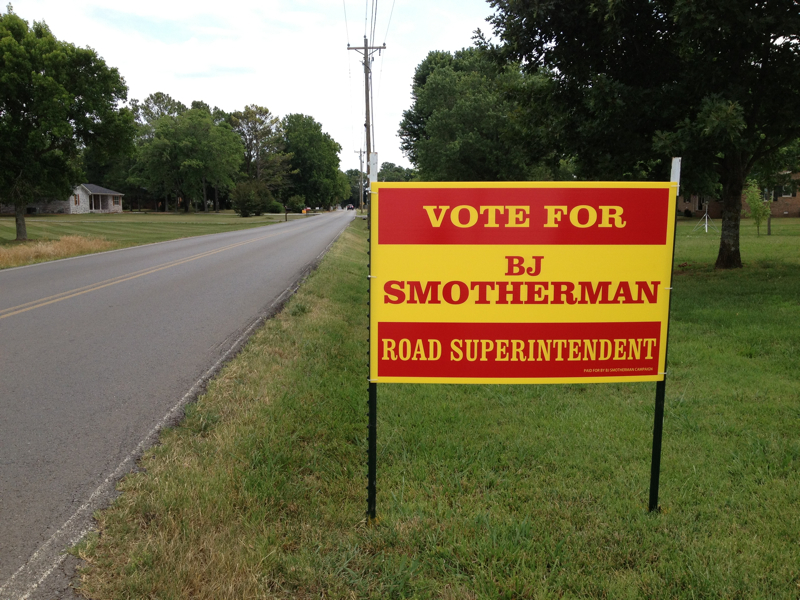 I’ll bet middle school was hell for them.

A short time later from The Donut Queen I got this slice;

“Sometimes wishing I was in Oakland too. Saw this photographer, thought you may appreciate her photoshop skillz. Some of the images are pretty rad. The Budwieser in the hot tub made me think of you; 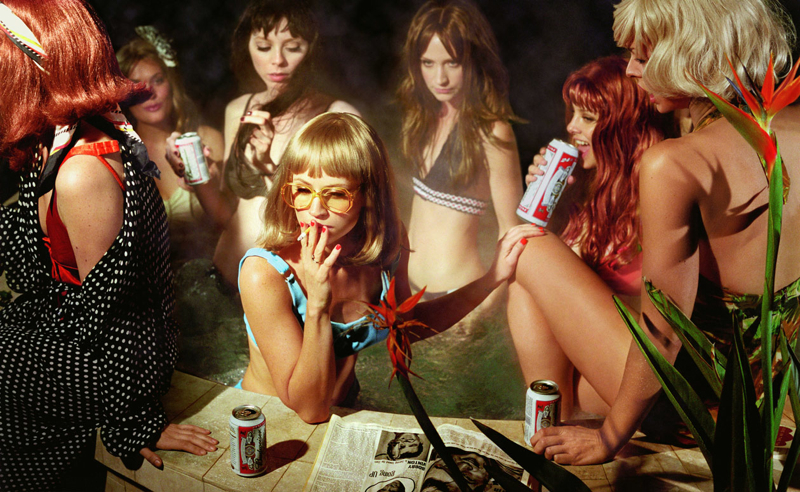 This both warms my heart, and reminds me that I missed the SF MOMA’s Cindy Sherman show.

Speaking of Photoshop, I recently found what very well could have been my masterpiece, if I had actually been the one responsible for doing anything aside from stitching the images together and adding some text;

The internet is a wondrous place.

From Master Stevie Gibson I got a race report regarding our Nation’s Capital’s recent Diamond Derby throwdown;

“Saturday was all perfect autumn weather here in the DC metropolitan area as I pedaled my way toward the Crystal City Diamond Derby—high blue skies, white coasting-in clouds, folks out playing rugby and soccer and taking up space on the trails…. All in all a terrific day to descend into a massive concrete parking garage in order to ride bicycles.

I got to the garage as things were coming together—yellow tape being posted to shape the course, food cooking on little burners set atop folding card tables, bar under construction and beer bottles being gently administered into the ice buckets, registration setting up, but I soon rode off to meet a big group ride that was coming in from DC. As that ride arrived at the Derby garage, the kids races got underway which was fast and furious as you can see from the photos; 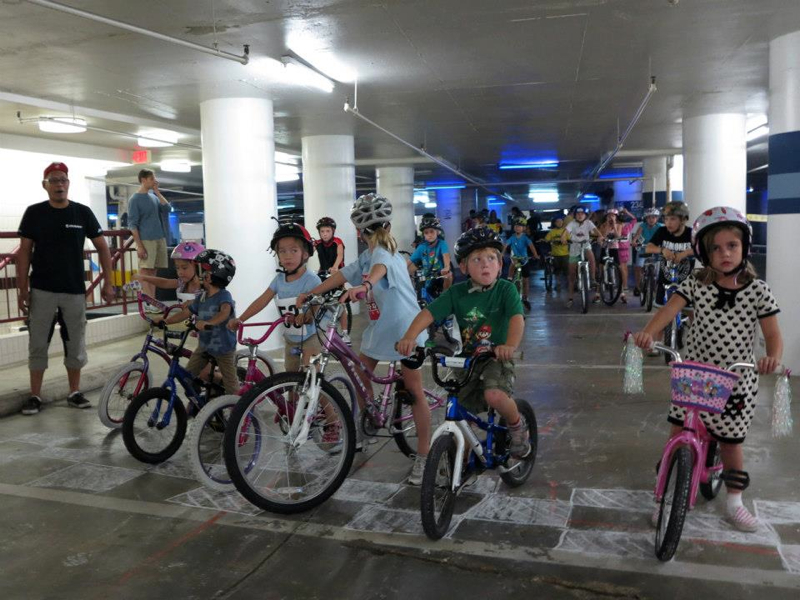 This was followed by a messenger style race with manifests and points for the older folks. Then there was some bike-style fashion show, then team relay races, then finally at 8 pm the big boy race. 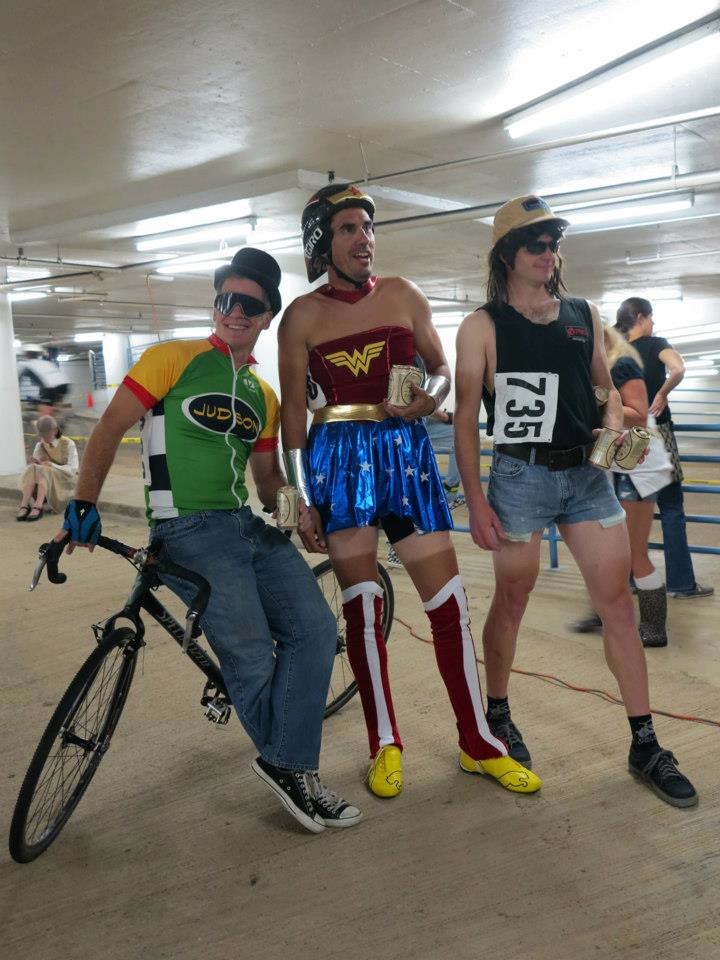 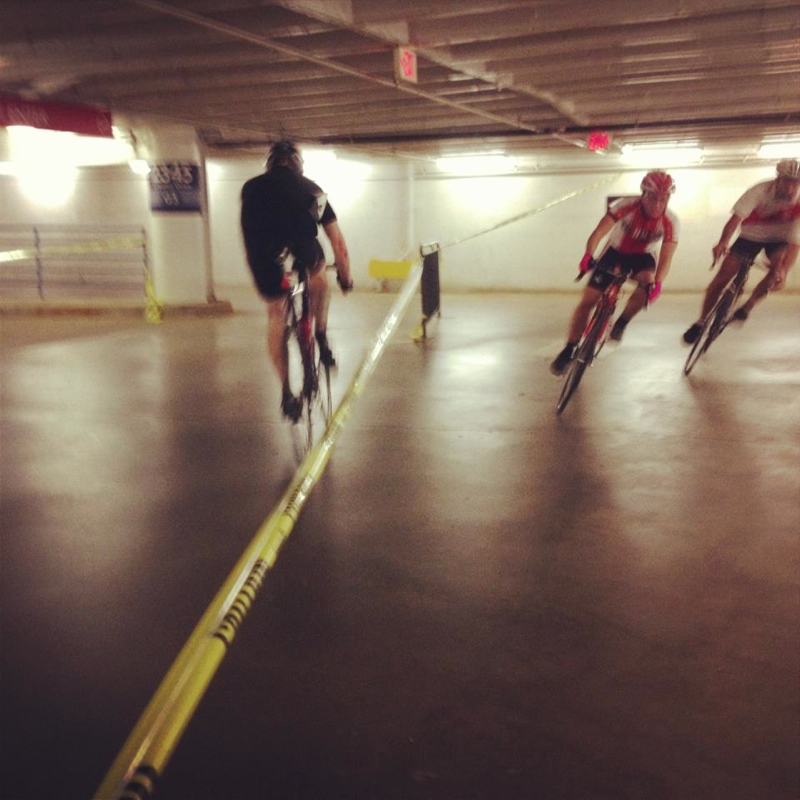 I started in that but soon found myself lapped by some twentysomething beardo on a single speed bike. A really really nice single speed. While I didn’t crash over the hay bales this time they did slow me down a tad—I have yet to learn that fluid cyclocross move that really seemed to work for those who had it mastered. Like that guy who lapped me. After several furious laps of battling I crashed into a tipped over orange cone then sort of pulled over, changed shirts, and went to get a beer so I could watch the finish! 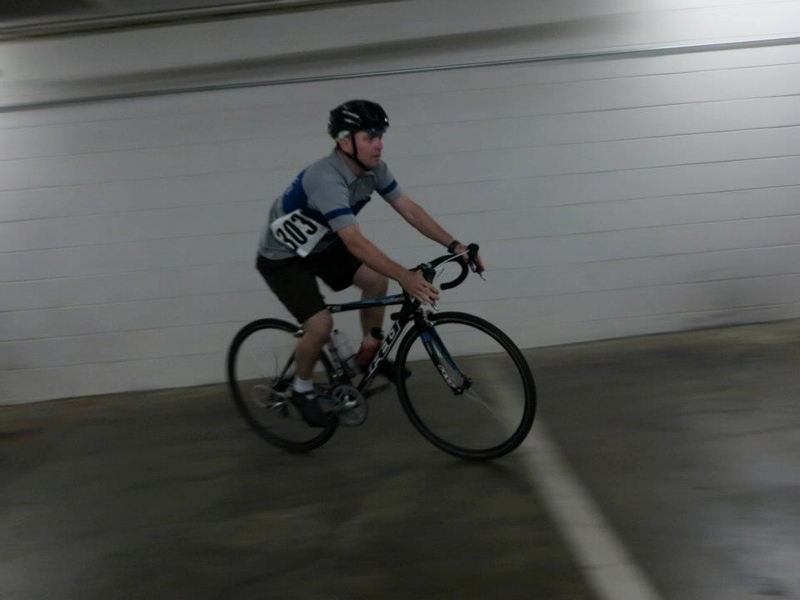 But maybe the best part of the evening was riding home on the clear full moon night and having the bike path all to myself and the city of Washington all lit up on the other side of the river. You would have liked that I think.

Stevie makes for a pretty damn good correspondent, but I’d be lying if I said I’d wouldn’t have rather have reported on it firsthand.

In other news relating to bikecycle events, Paul from Southern California’s Atomic Cycles has some upcoming hijinkery that if you find yourself in that particular region, you might want to get in on;

Once again I am putting the word out for my 12th annual Halloween ride, hope you can make it and if you could, please spread this info around to your friends; Thanks! See you then!

Both Paul’s afro as well as his events are legendary. Get through and he will assuredly show you a good time.

From up in Minneapolis West, Backyard Blamanda sent me a video and a confession;

“Hello sir,
We are siblings of the party and as my brother I urge you to post this video of our grandest of the openings here at Chrome PDX. Yes, I smoked a joint.

That Blamanda is certainly one of the hardest working gals in show business.

Another slice of video wonder was sent to me from Francis;

“I am guessing this is flooding your in box… But gawd damn this is good. the closest thing I have seen to a skate video on bikes.”

I am a true believer in what one might lack in rad, can certainly be made up with by an abundance of weird.

Which is a perfect segue to this transmission from Adam of Hawley USA;

I awoke this morning in a strange hotel room, in a city with whom I could not identify this morning. A thumping hangover, the smell of whiskey on my pillow and an unknown man lay wrapped like a mummy in a sheet in the corner of the room. He was still breathing.

I came to and remembered where I was and what had happened and was glad in knowing we fucked Akron, Ohio hard in it’s ass last night.

After aplogizing to my sister for destroying the wedding favor gift bags in the hotel lobby at 4am, and getting a stern, “bad doggy” talking to from my father, I decided I shall “take it easy” for the rest of the weekend. And to be the good elder brother for my youngest sister’s pending nuptials.

Being the redneck that I have grown to be I stopped by and read up on AHTBM. I saw your post. It warmed my heart.

With my faith in humanity firmly restored I have chosen to rally and once again fuck up the Rubber City’s tight butthole once more in a most glorious fashion. The story of my rager will be told by lesser men for generations to come. All because I read your blog.”

That email contained a lot of talk regarding bad holes, and I’m just glad that everyone emerged from the skirmish in one or two pieces, which is more than we can say for Charlie.

Lucky for him, Unicorns have three other kidneys for backup.

14 Responses to “Back into the mines of Candy Mountain.”