To the casual observer, I would guess that my ‘job’ looked like a reasonably easy one; 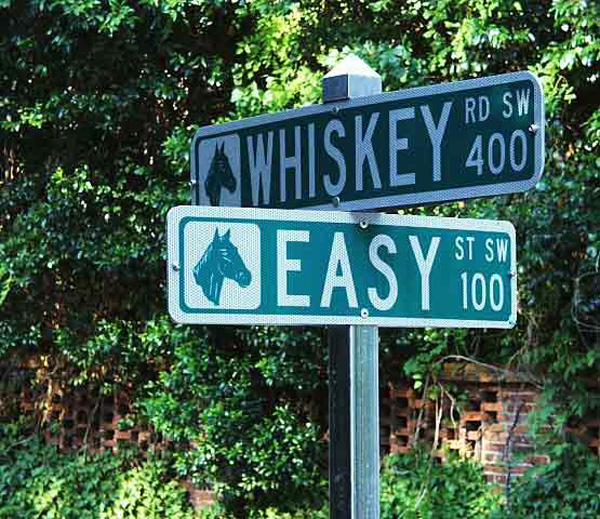 And they would be right. It’s absolute cake.

That said however, I still have to follow a specific protocol when going about my daily tasks. For example, I tend to write a post a day or two in advance. That way I can read it a number of times before I post it and clear out most, if not all of the misspellings, the run-on sentences, and so forth. Clearly one will occasionally slip through the cracks, which will result in someone making a snide comment regarding the difference between wonder and wander, or then and than.

On Monday I had no luxury of a 24 hour edit window. As a matter of fact, for the first time in about five years, I wrote the entry on the same day I posted it. Not only that, but I did it while in the throes of exhaustion. The initial results were certainly nothing to write home about, but by god, by 11:00 am West Coast time, I had polished that turd to positive reflectivity, so if by chance you were busy celebrating Columbus Day by walking into other people’s homes and telling them that it was yours now, perhaps you’d like to take a step back in time and check out your own turdy reflection.

Or don’t. Either way is cool with me.

Secondly, I make nearly every attempt to stay on top of publishing fodder which readers very thoughtfully send me. Keeping tabs on what the dedicated readership is up to is, after all, one of the four cornerstones of my operation. But sometimes I not only drop the ball in that department, but I let it get away from me, and then it rolls down the stairs and out the door and gets stuck under the neighbor’s car. They are a nice neighbor, and generally don’t mind me poking around underneath there while hunting for said ball but maybe the bathtub is about to overflow, or I forgot a tortilla on the stove or something and I get wildly sidetracked. Then all of those correspondences sit, and collect dust and the little baby Jesus cries.

Well, today I say “no more until next time!” It’s Wednesday, and we have an array or balls to shovel, so let’s get down to business.

Digging into the inbox, and finding the following correspondence from Crank I realize that it is exactly a year old, which still makes it relevant;

“My girl in the middle of serious snow poo. Awesomeness, caffeine stoked and rockin the fixxie. Just a photo, might fit somewhere, er not. 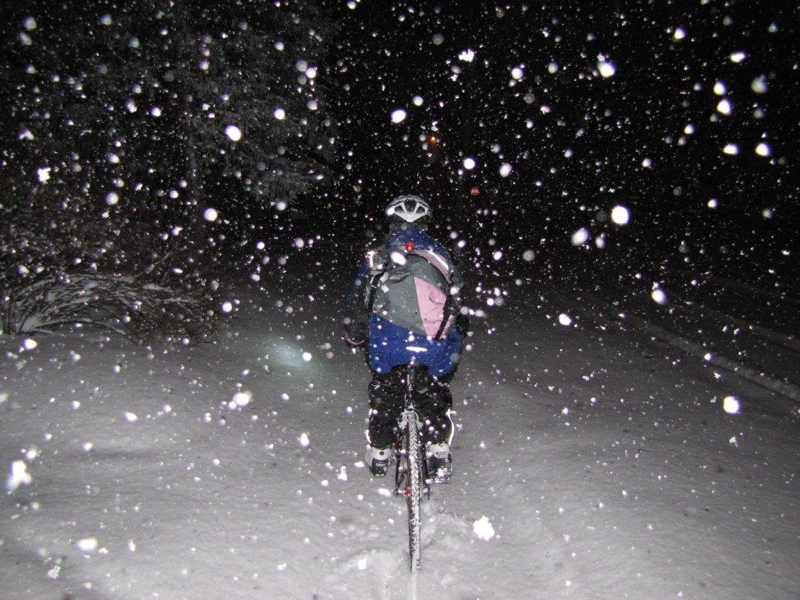 Sometimes my flakiness goes all the way around the dial to efficiency.

Then, just a few months later, or ten months ago, depending on if you’re an optimist or not, California DeStrepheeno sent this observation in; 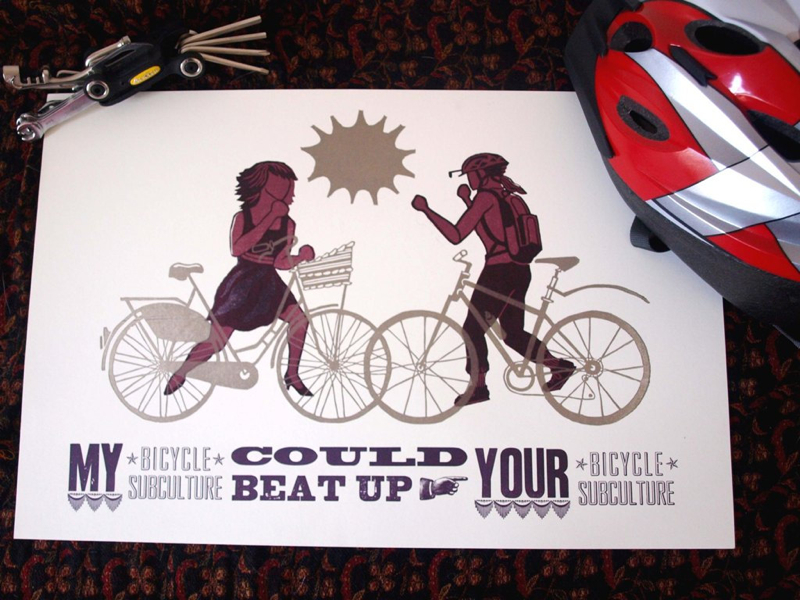 A Pay Per View fight it is not.

“Couldn’t help but think of you the other day, no I wasn’t touchin it. But when the stitching was done I came out of the hospital to get back on the cargo bike, this is what I found.” -Because all of us at some point or another have to give a blood offering to the gods.

It was just a little bit after Zitox opened himself up for The Dark Lord when Devin got in touch with the following; 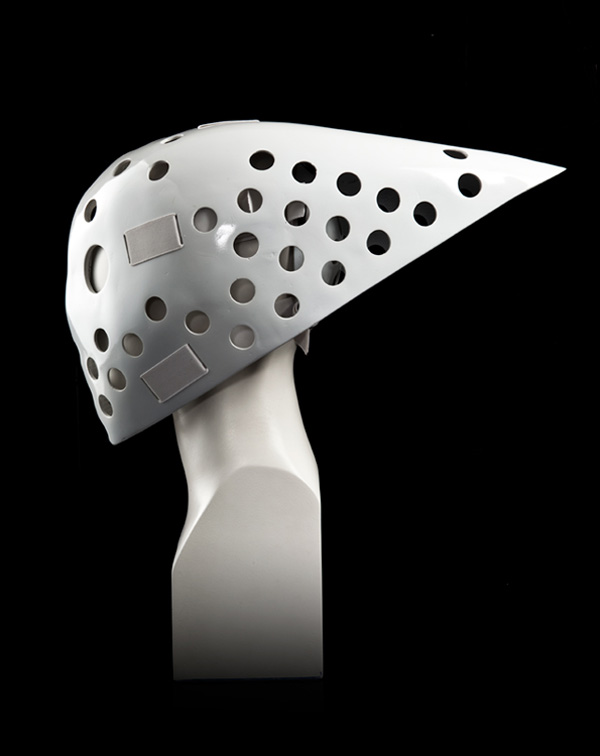 And because I inadvertently sat on this email for six months, we have it here just in time for Halloween.

Mac sent in a quick hello as well, which looks like this; While I am all for sticking it to The Man with a handlebar, I mostly think that the vandalism prevention measure would make a mighty fine heavy metal fashion accessory; 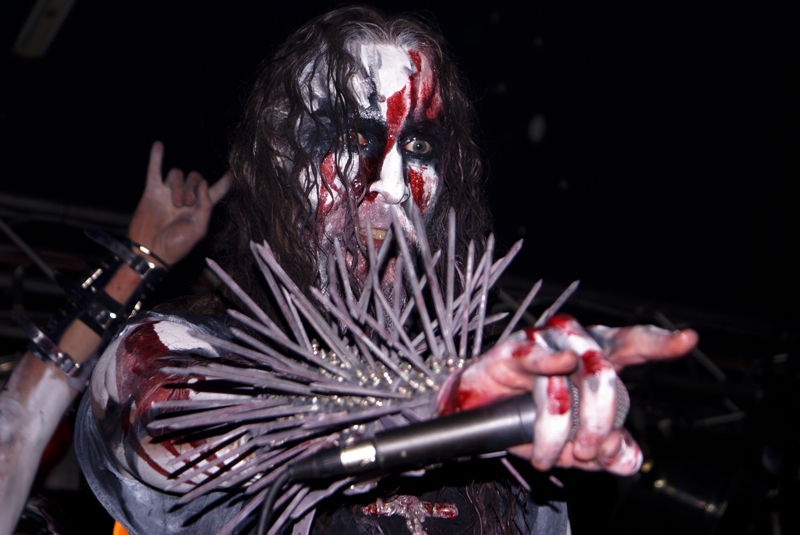 Eric sent in a heads up from a far away land just a few months ago, and considering the fact I haven’t heard from him since, I suppose it’s possible he’s still out there somewhere;

“Greetings from jetlag land. I know it’s not cycling, but we did do a pretty good job of following the Bummer Life creedo. When spending 11 days on a wooden sailing vessel 200 nautical miles from the edge of any populated landfall in the name of pursuing the wave sliding activities, cold beer is critical; 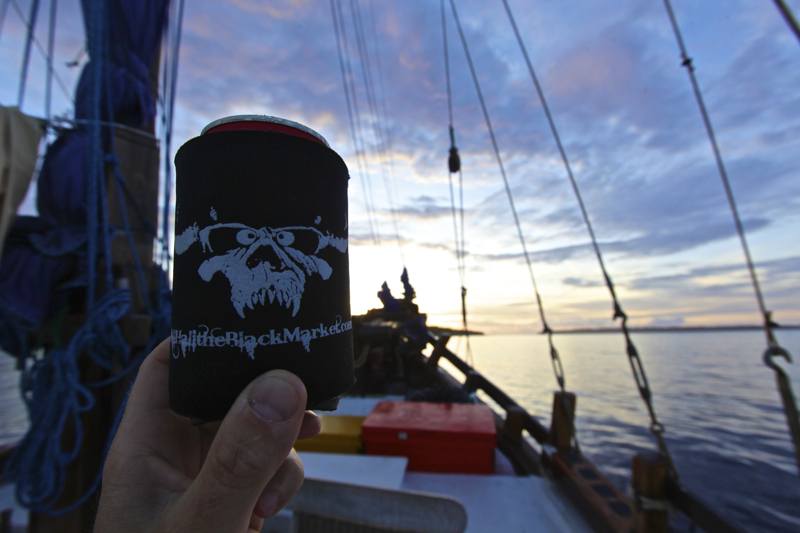 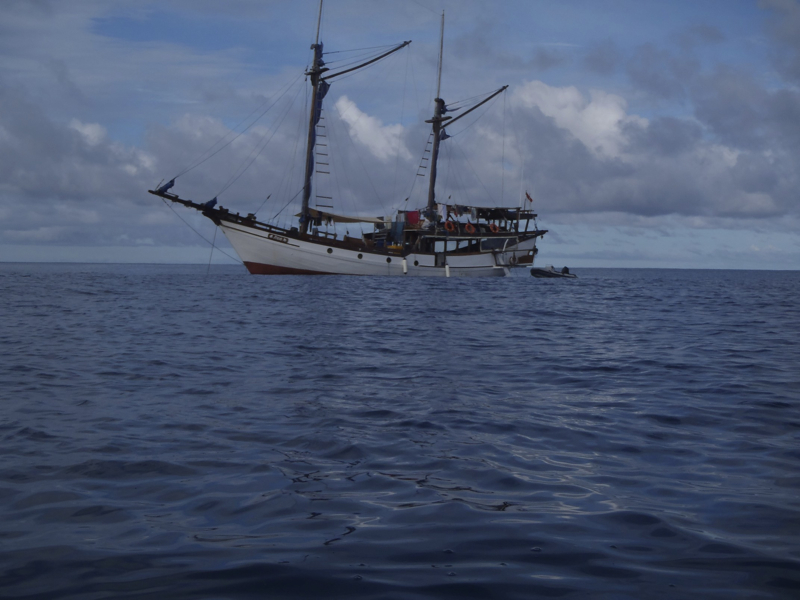 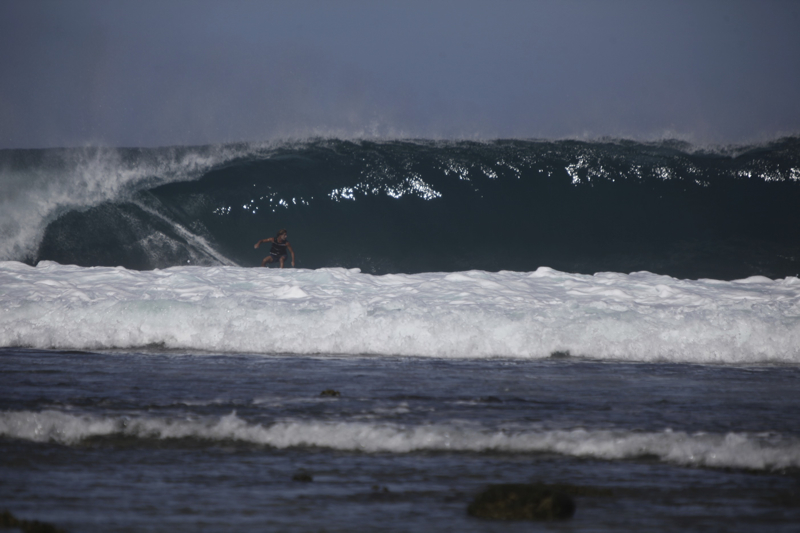 That’s NOT me on the particular wave in the photo, but an approximation of what was going down daily in the Indian Ocean last week. Thanks to AHTBM for keeping the Bintang’s chilled. (our crew of 7 consumed 3 bottles of Glenmorangie & 35 cases of Bintang, the national beer of Indonesia, which I’ve now come to loath the taste of).

I find it both reassuring and also slightly disconcerting that AHTBM products are far more well traveled than I am.

And speaking of traveling (though not necessarily to exotic locations), Curtisbaby sent an email in regarding an observation he had while doing some of that;

In my hotel room was a pic of Hugo Pena in the yellow jersey as well as this pic of Lance. 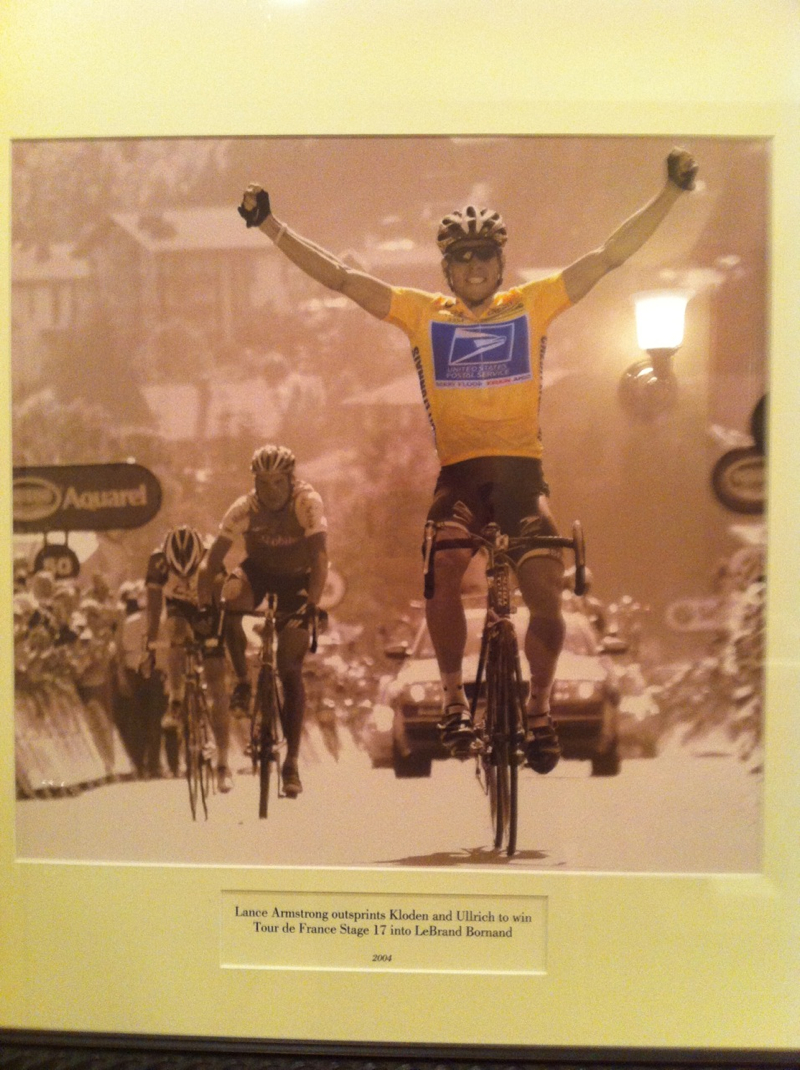 Which just so happened to be here… Needless to say, I felt very proud of myself after my morning constitutional. Such encouragement!

Floyd, Tyler, Greg, you, me and everybody else… But probably not Lance who most likely just sued the decorators.

Then, while we’re on the topic of victorious luminaries, Lucho from Cycling Inquisition sent me the following email containing a photograph of a bike made by a company who for all intent and purposes is a zombie;

“The angels sing, and they sing for you.” 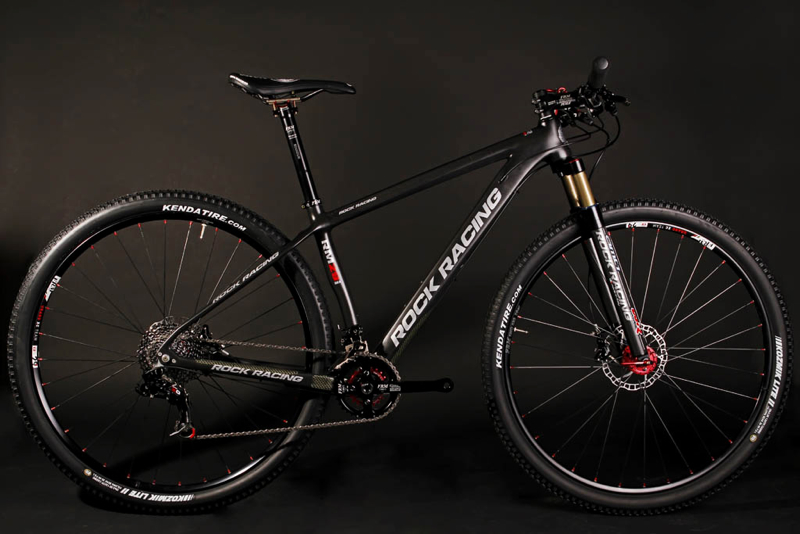 They’re a zombie cause… You know, cause they’re like, not dead and stuff.

Finally, and in closing, I have a couple of items of business, or if you will, bidness to attend to.

It was just this past Friday when I rolled up the doors, and presented a huge array of goods that I have available in the AHTBM Market.

Two items which didn’t make it into the list because A) I didn’t have them yet, and B) I had forgotten I had them at all, were the two following beauts that no man or woman should go without.

The first is the collaborative Dank/AHTBM cüzie which just landed at my house yesterday afternoon; Just like all of Dank Bag’s goods, they are flawless in their construction and handsome as the day is long. (*Update* I seem to have sold out already. Fear not hearty beer drinkers. I have more coming soon.)

Secondly, the item which I had forgotten about are my black on black wool winter caps made by San Francisco’s own Chuey Brand; 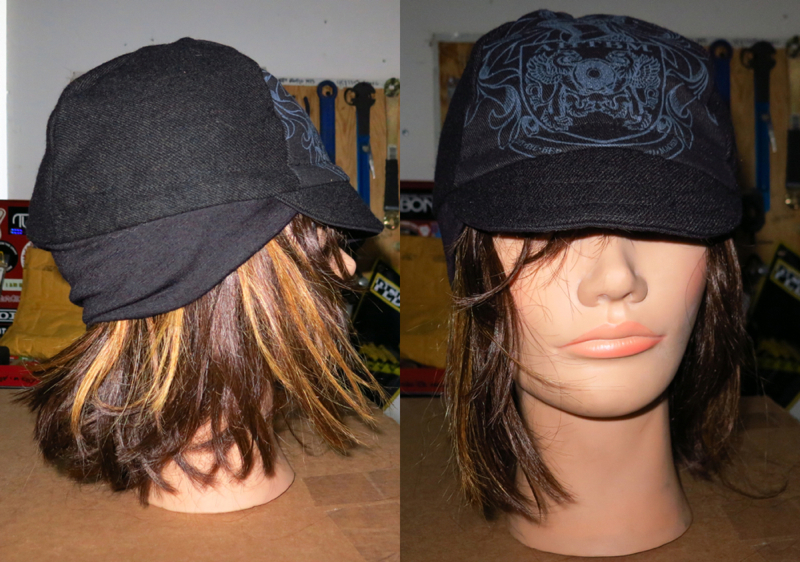 Call me crazy, but that Chlöie is a spicy meatball, is she not?

With beer getting warm, and temperatures getting cold, these two pieces make pretty respectable bookends.

It is with that, that I switch off my head lamp and return to the surface for some fresh air and sunshine.

The Canary would want it that way.

7 Responses to “Working in the coal mine.”