So are all y’all.

That’s why we’re here together.

Thanks to Joe for passing the video on and finally putting things into place for me. All this time I just thought I was grumpy.

And while I’m on the topic, I promised Maximo Supremo residents and tires of bike blogger douchebags, (same diff) Rubena Tires that I would post some information they sent onto me on Monday. Clearly I didn’t get to it, which lead to an email from Case, who is the official Rubena mouth. This in turn prompted a response from me asking him to ‘get off my goddamned back’ and down the negahole I went. It was a short spat however, because we kissed, made up, and I’ll post his plea for you now;

“I said it before, but not on the internet, so apparently it’s not true, until now. Thanks for putting the Underbike Industry Mixer® together and inviting all or your closest fiends. I think I put this up on your FB, but I’ve attached a little image of the night. AHTBM banner is in there and so is the creeper. It’s taken people time to see him, but it’s always a good time when they do; 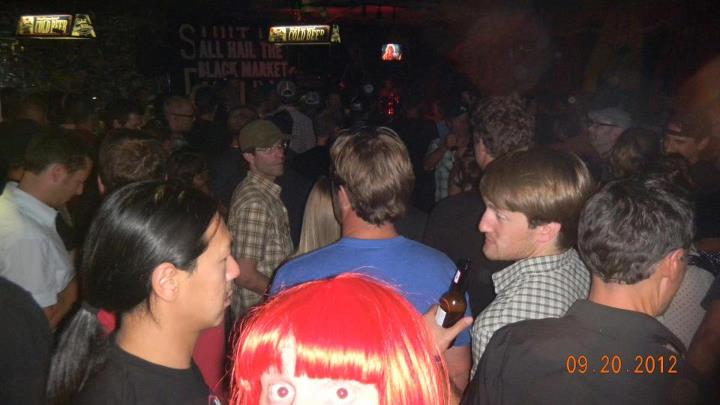 The Rubena FB contest thing went off without a hitch, Noah from RI got his tires and I didn’t have to buy Hurl anything to drink, as he was Leaving from Las Vegas before the UIM®. Having to pay Hurl’s bar tab would have been one hell of a hitch. Anyhow, it all seemed to work so well, that I’m doing another give away thing-a-ma-bob.

If you ‘like’ the Rubena FB page, do the following:

-Get a new friend to ‘like’ us
-Give your friend an intro on our wall
-Get ready for crappy prizes (Rubena flask, stickers, and maybe something else) for you and your friend! ***If you get your names pulled***

See? It’s that easy. ‘Liking’ their page, or pissing off. Either way, you’ll hardly break a sweat.

And while we’re discussing Rubena Tires, a few weeks ago I stripped my Hunter twentyninering mountain styled bikecycle in order to send it back to his mountain top fortress for some upkeep.

You might recall this post when I had not only initially thrown their skins on that bike, but went so far as to discuss weight, price point and a number of other specifics which I rarely, or ever do. Well, with the Hunter out of commission, I swapped them onto my Ventana making it ready for continued abuse; 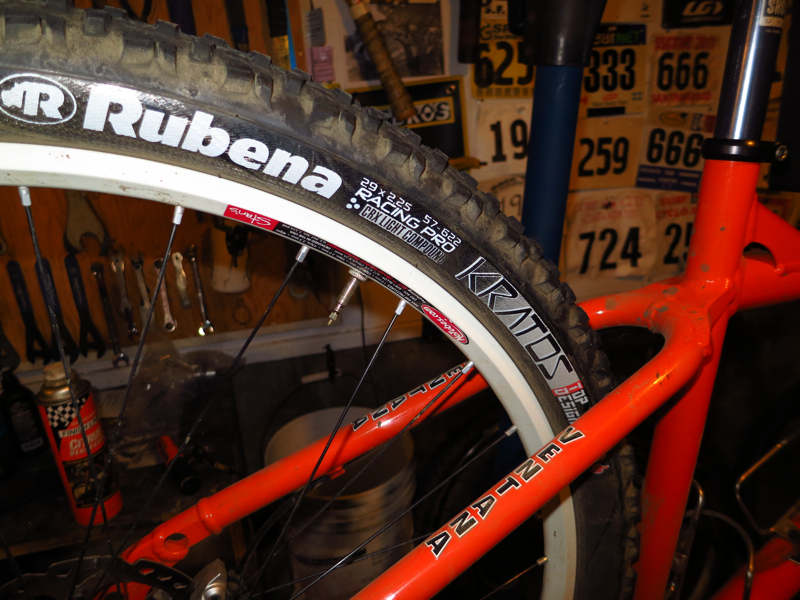 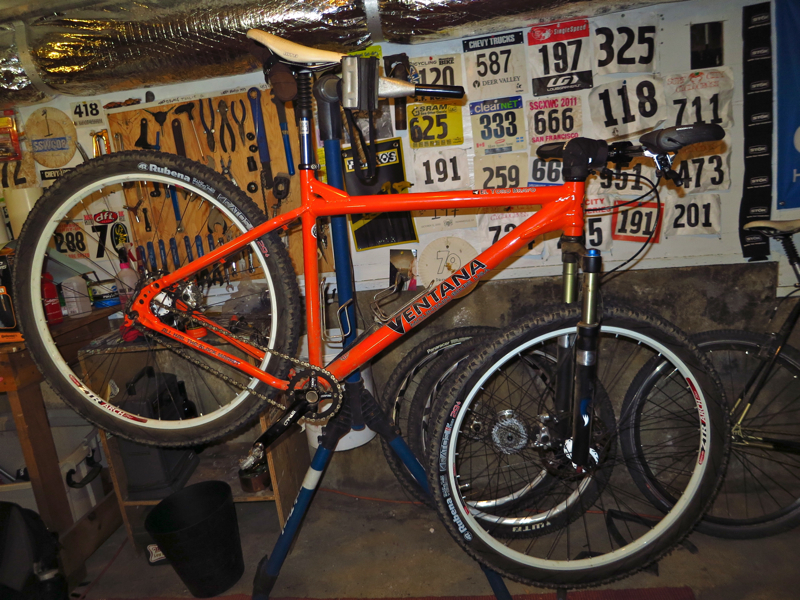 But backing up for a second- Case also mentions Hurl of C-R-C fame, for whom I have a small tribute I would like to extend to publicly.

I first came across an old issue of his zine in the original Swobo offices when they were located in a basement on Townsend Street in San Francisco’s SOMA district; 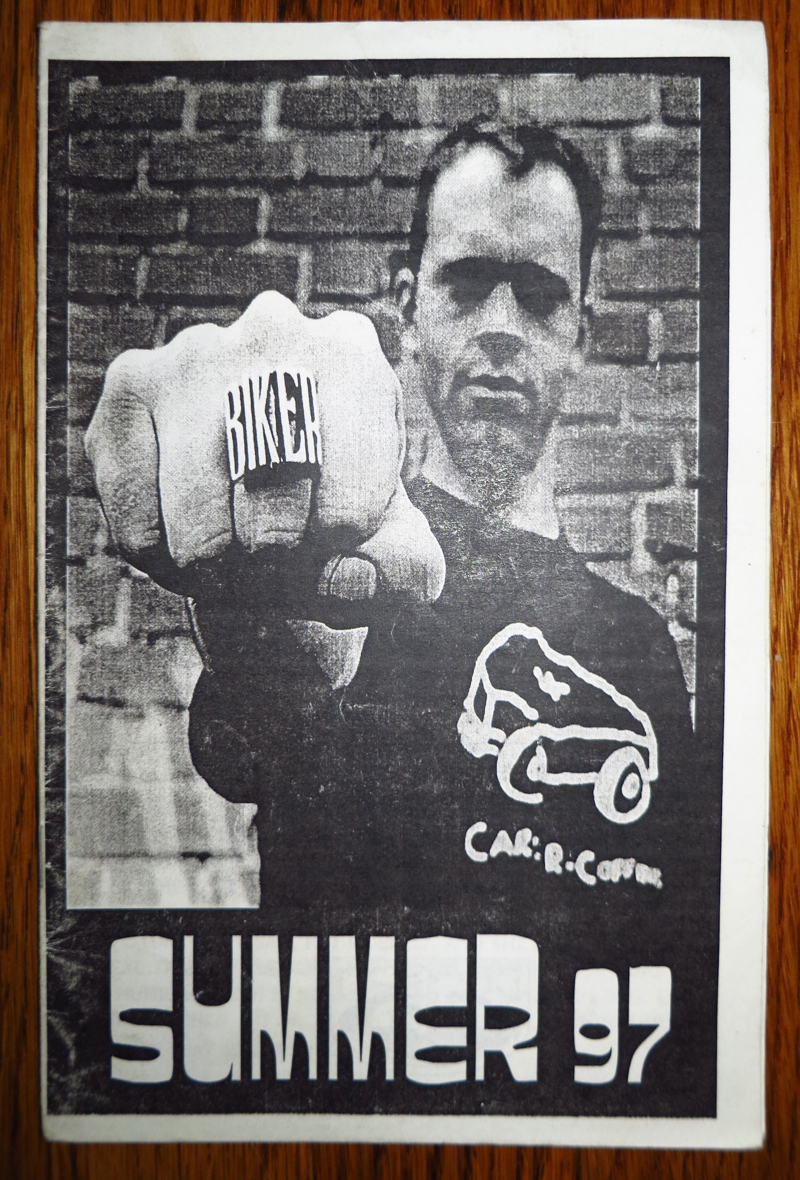 It was sitting on a neatly folded CRC shirt atop a filing cabinet behind Rennacker’s desk. My first thought was “I love zines and t-shirts. I’m going to take this” followed by “how does that guy have the same ring as I do?”

There was some kindred spirit stuff going on, and we immediately began writing postcards to one another.

Since that time, we’ve traveled the country and Canada together, raced bikes against one another, passed out on one another’s floors and so on. It was a true bromance in every sense of the word. Sadly, a few years ago our friendship ran slightly aground. It was nothing catastrophic but we continued on in different directions, all the while the wedge sat festering. Last week while in Las Vegas, we had a summit to figure things out and at the risk of getting mushy, I’m happy to say that we have.

The moral of the story is that it takes two people to maintain the health of a relationship. You’ll not get a rebate on today, and you’re not guaranteed tomorrow. Tell your friends and your family that you love and appreciate them at every possible opportunity so there is never any doubt.

Besides eating Cheerios, it’s the healthiest thing you can do for your heart.

Finally, and in regard to friendship, from Jason I received this;

Don’t ask me why, but I thought you’d appreciate this photo. I help run the local bike recycling program here in Athens, GA, where we recondition bikes and give them to those in need of cheap transportation through local social service agencies. I dug this out of a bin of parts last night and found it captivating; 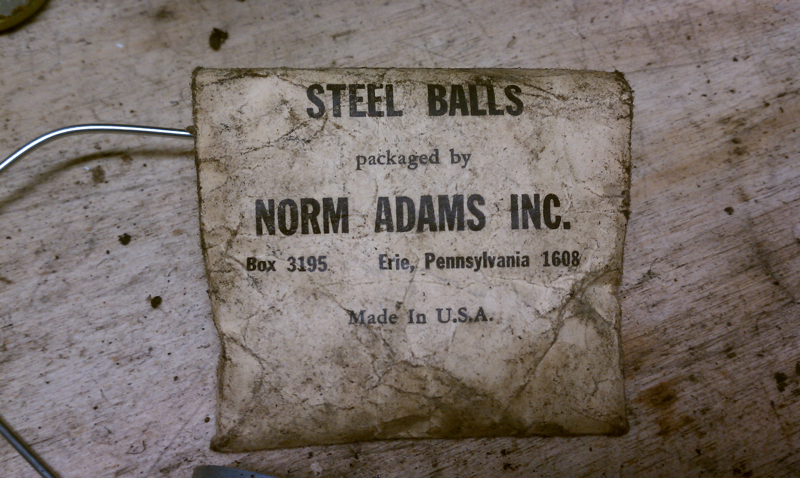 I’m off to New Hampshire next week to donate a kidney to my best friend, so I’m feeling the need to steel up my balls. Finding this “package” helped in its own small way.

That is really heavy stuff. Almost the kind I can’t wrap my mind around, and clearly Jason’s friendship with the person to whom he’s donating his kidney knows no limits.

With his gesture, I have to acknowledge that Norm Adams wasn’t the only one with steel balls. Not only that, but because of it, whatever negaholic tendencies I may have been feeling before have all been forced away.

18 Responses to “I’m addicted to negativity.”