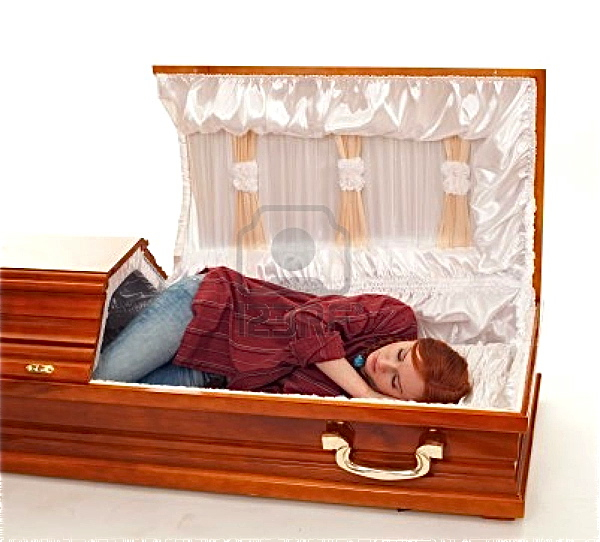 I mentioned a number of times last week that Maximo Supremo residents (and manufacturers of their new Disk RHUB 170, but we’ll have more on that eventually), Paul Components was the host for the weekend’s Meet Your Maker ride.

Needless to say and based on the title of today’s post, the fun knob was turned to eleven and broken off, which has left me feeling bloated and sore and exhausted, but in the good way. The best route for us to take in kicking off the saga I suppose, is to start from the beginning.

Instead of making the trek to Paul’s Chico, California headquarters on the day of the actual event, JMac and I converged on Blue Collar Robert’s house on Friday afternoon. Within minutes we had beers in hand and were getting to the task of cleaning J’s bike and dressing it up with some proper accoutrements; Beyond that, we took care of a little bit more Blue Collar business, with some details on a little project we have cooking for yours truly; 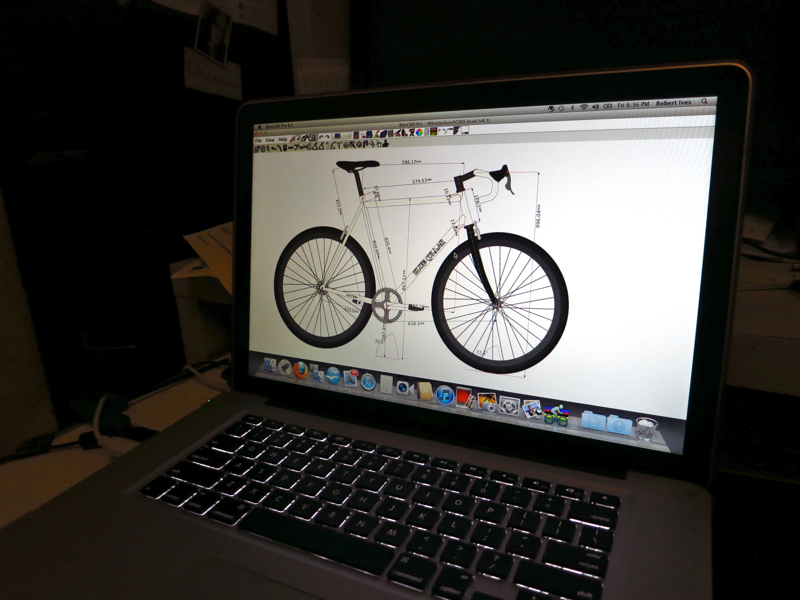 Because I really need just one more way of suffering.

Once business was handled, and a few more joined the fray, food was the order, after which we adjourned to the backyard and did what came naturally by starting a fire; In the years since I have been friends with a segment of this group, otherwise known as The Amigos, Seancho and Robio have gotten on the wagon, while Berg and I have most definitely been dragged along behind it. This is why it was a peculiar thing indeed when upon waking up the following morning, I felt like a million bucks, and Robio was fractured inside the safe confines of his bed with what appeared to be the worst hangover in history. He was like Jesus dying for my sins. I assumed as folks began returning to the scene of the previous evening’s crime, that he might shake it off, but with the clock ticking to our departure, his condition only got worse. The call was made to abandon our fallen comrade and get on the road to meet up with our makers.

Arriving to the Paul Components compound a fashionable thirty-five minutes late, the numbers were already swelling and Paul had a few choice words as well as an improvisational dance performance for us before we departed; 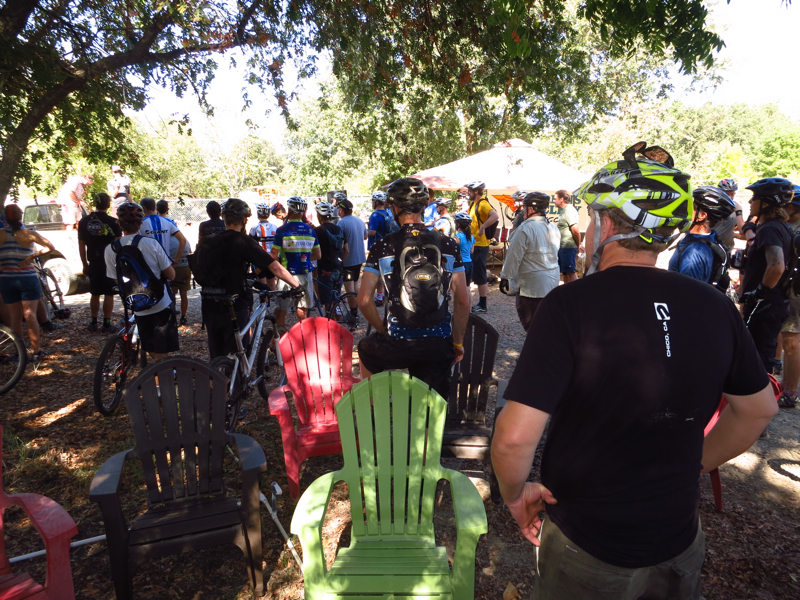 Having never before ridden in this region, I was unsure quite what to expect, but I knew it was rocky. After some quiet bike paths, stretches of dusty smooth singletrack, and a corndog with Coop; 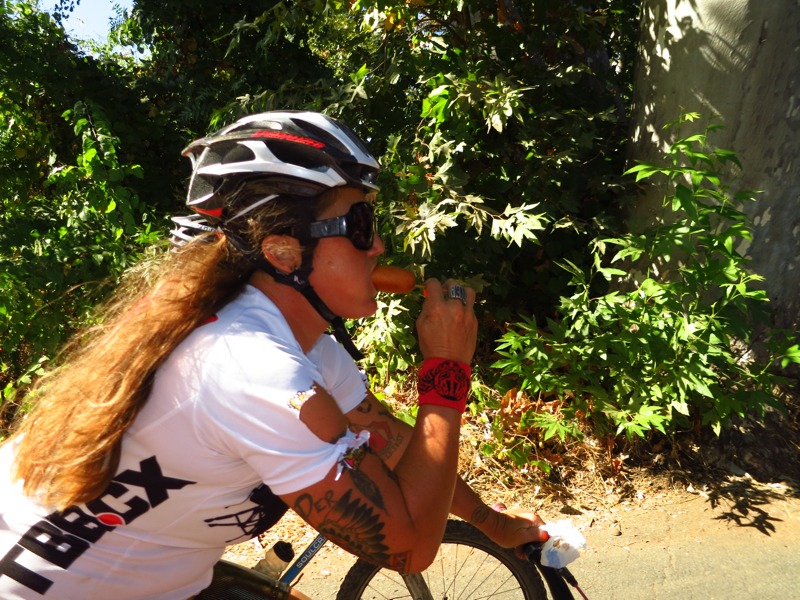 -the first climb was upon us, and like the faithful making a pilgrimage, we ascended en mass; 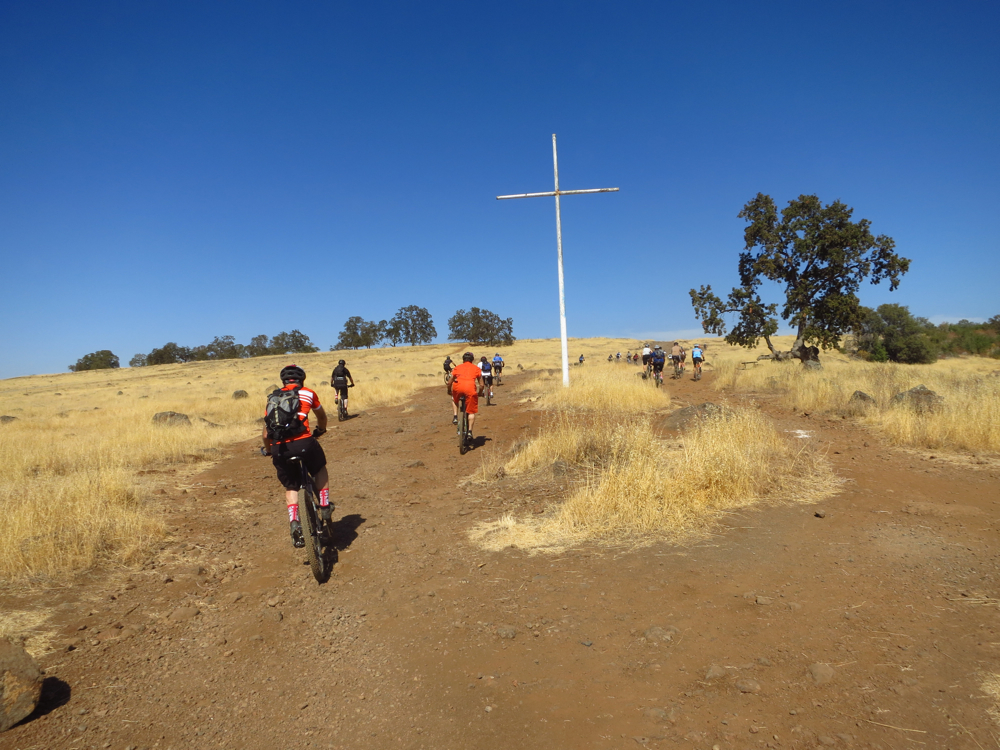 It was indeed rocky, and as exposed as the moon’s surface, and if the temperatures were in the 100s, as they had been earlier in the week, the ride would have been unbearable. Luckily for all of us, it was quite mild, and I continued on with my journey until I broke my chain.

In the sixteen years of riding a one speeded styled mountain bikecycle, I’ve never done that before. It would appear as though getting up out of my chair periodically is making my sticks a little stronger.

“What’s the best possible time to have a mechanical?” you might be asking. The answer to that would be when you are surrounded by frame builders. I was afraid I was gonna have to reposition my EBB, but luckily Joshua from Francis Bicycles (being the boy scout that he is) happened to be carrying a master link. While I worked on my conundrum, it made for a good opportunity to stand around, shoot the breeze and drink another beer; 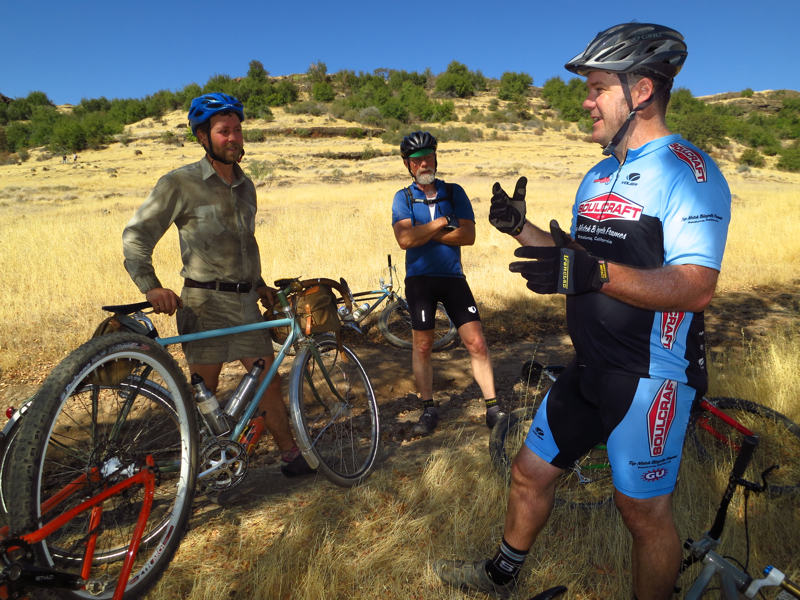 The trails here are not only rocky, but at times are extraordinarily technical. Sometimes you clean a section and have to cheer yourself on, and sometimes your friends don’t, which gives you an opportunity to heckle them, while making a verbal declaration that you are better than they are; And then we rode some more; 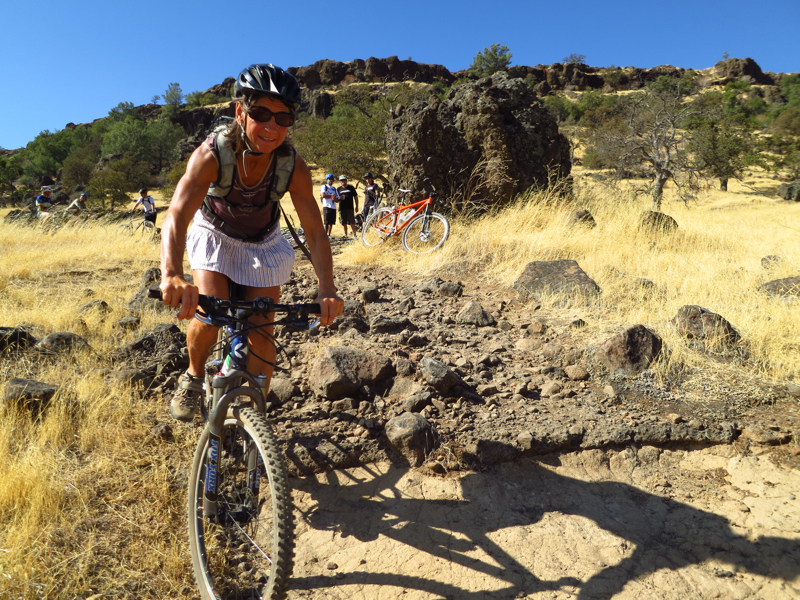 Being unfamiliar with the area, I was curious what the rest of the year here looked like. Paul told us that because it’s a volcanic region, the trails get closed during the wet season, but during the spring, when the dirt is tacky, the hillsides are green and awash in the color of wild flowers. The waving fields of gold were certainly very pretty, but I look forward to a return trip when I can see spring’s bounty for myself. Heading on, we finally came to the end of the road, where we all filtered into a small clearing and soaked our weary bones and made fun of the condition of our host’s chain; 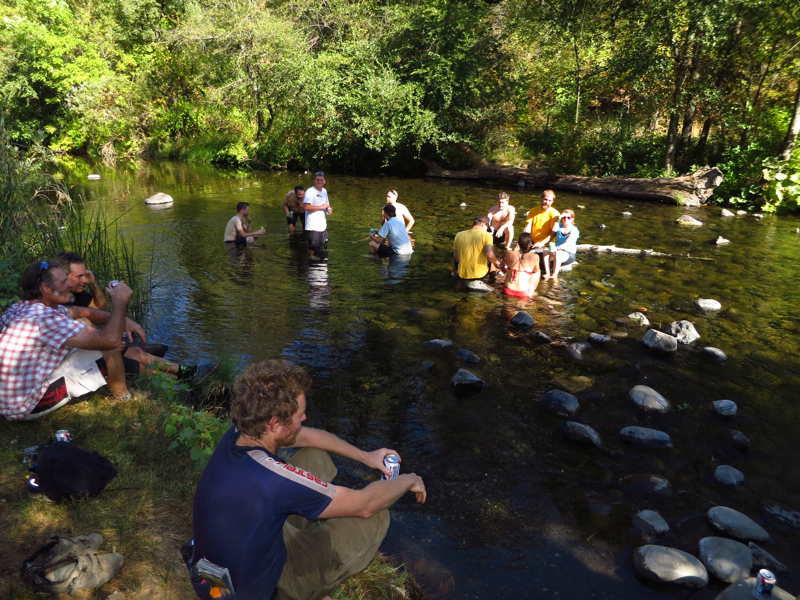 Daylight was burning and it was time to make the roll back to the shop. Upon our arrival the barbecue was lit and the food stuffs were flowing; 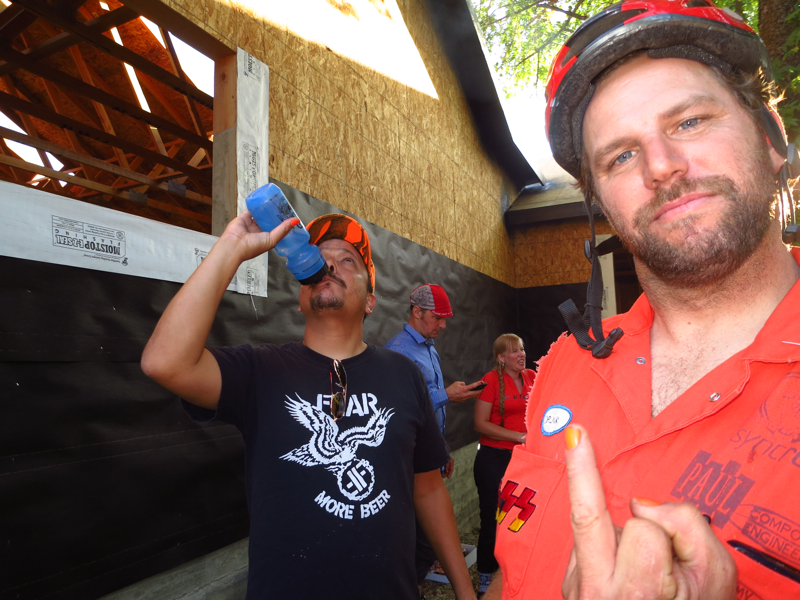 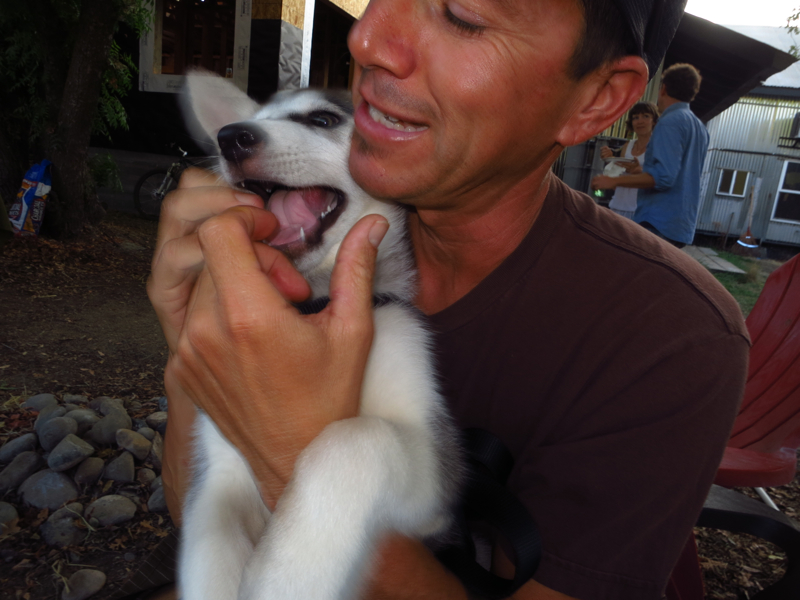 Once the lights went out, things naturally got weird; 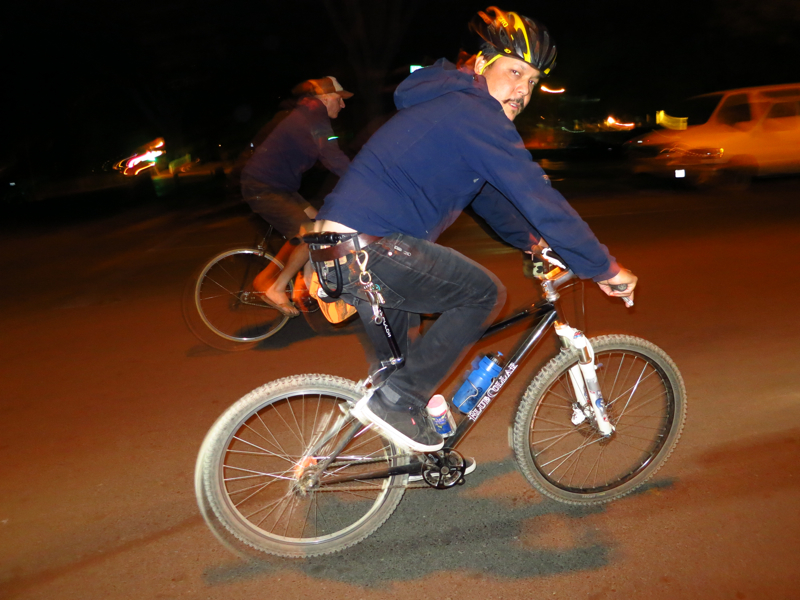 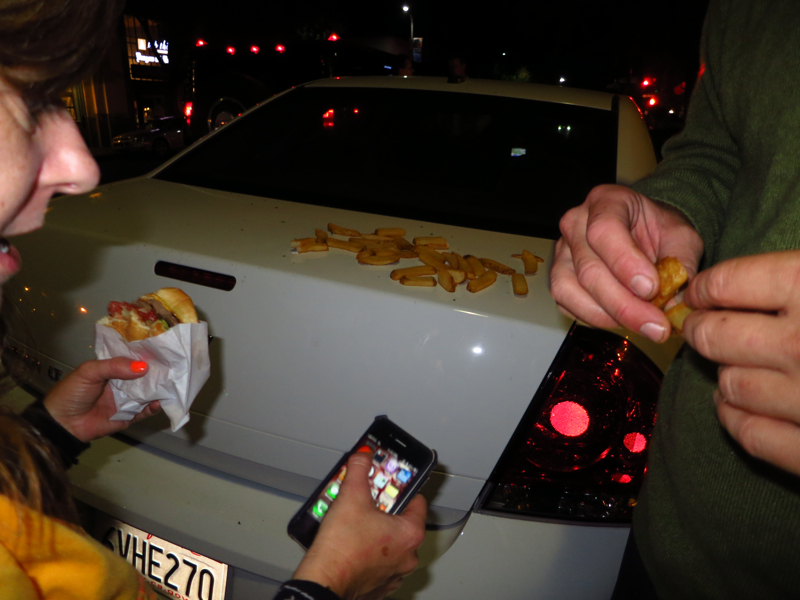 In just a few short hours while immersed in the culture that is a Saturday night in Chico, I witnessed one fist fight, one guy getting sat on by a bouncer and then trying to bite the responding cop which resulted in a punch to the head, scantily clad young women whose male companions would ask ‘bro, what the fuck are you looking at?‘ any time anyone would glance at them. All of the offenders I witnessed were wearing fitted ball caps, who in turn were making the same inquiry to others who glanced at their female companions, and so on.

There were more drunk kids than I believe I’ve ever seen in one place and as a group of unassuming grown ups, we filled the enviable role as ‘fly on the wall’ and watched as the parade of the deluded flowed past us by the car load. It would have been totally funny were it not for the stark realization that one day in the not so distant future, these are going to be the same assholes who will be running the world.

Anyway, at this point we’d had enough and made our way back to the shop to burn more stuff.

Considering how dry absolutely everything was around us, I voted no on the fire, but my protests were quickly drowned out by the sound of lighter fluid being squirted all over a pile of pallets; 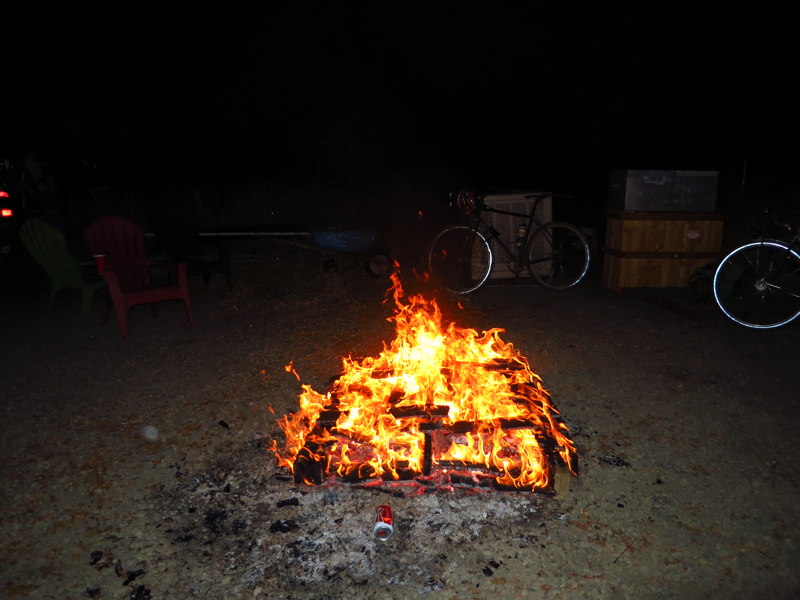 Eventually I shuffled off into the darkness and crawled into the safety of my truck bed, dreaming dreams of rocks, canned beer, and drunk kids.

As they’ve done with their line of components, Paul and his crew absolutely raised the bar with this installment of the Meet Your Maker ride. They were consummate hosts and I can’t offer thanks that would do my gratitude justice. I’m exhausted, and road burned, and ready to lay down for some continued recovery.

13 Responses to “There will be time to rest when you’re dead.”