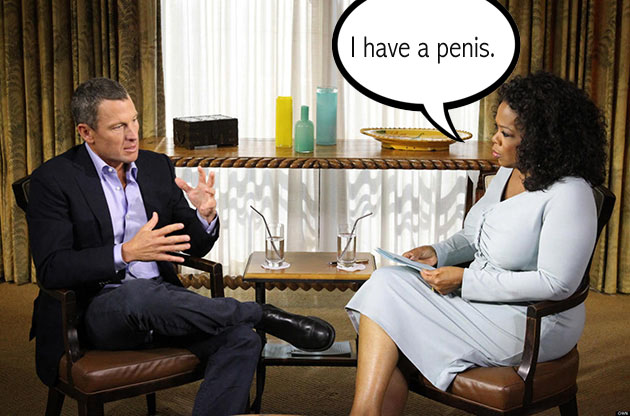 By now the world knows what the world already knew, or possibly thought they knew, or maybe even doesn’t know anything at all.

For you see, I’m writing this with my head buried solidly in the sand, and also, I don’t really care what Lance and Oprah have to say to one another because I don’t care about Lance or Oprah.

What I do care is what Olympic gold medalist and World Champion Nicole Cooke has to say on the matter. And for those would like to delve even deeper into her perspective, might I direct your attention to this article in the Guardian.

Not only is she one of the greatest female cyclists of her generation, she’s one of the greatest cyclists of her generation, and her retirement is little more than a footnote, except on this site, (which itself is a bit of a footnote) where I intend to do right by her and her achievements by declaring today as ‘INTERNATIONAL NICOLE COOKE DAY‘ (assuming there’s not already one of those).

So to Nicole and her impressive career, I say job well done, thank you for everything, and I appreciate you this much; 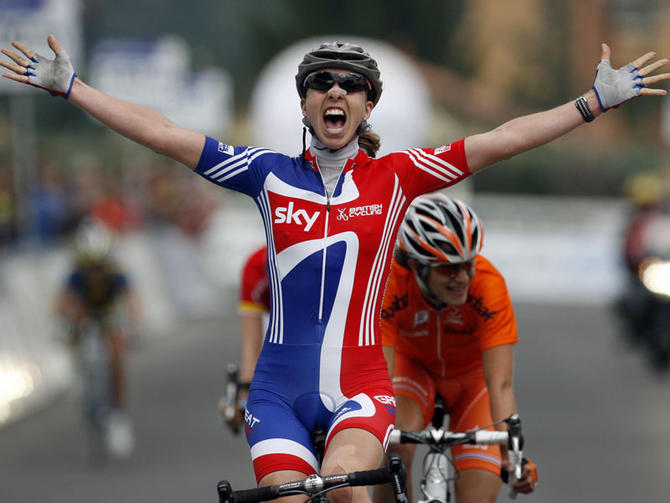 What troubles me the most about all of the hoopla surrounding Lance, his victories, and his ultimate disgrace, is this is all a bulk of society knows about bicycling. The average person doesn’t know about Nicole, or the Rwandan cycling team, Ride For Reading, or any of us… It’s just Lance and ‘Premium Rush’, and that is a goddamned shame.

What America does know, is football, and since the majority isn’t making any attempt to understand what it is we do, I opted to make the first step, and wrap my mind around the intricacies of America’s second favorite ball sport. (I’d say you should feel free to insert Lance references here, but at this point it’s low hanging fruit.)

With that in mind, I offer this;

As we back pedal to other news flashes that had me laying on the floor in an attempt to figure which way was up, apparently disk brakes on cross bikes might not be the shiz everyone thought them to be.

Now before people start hurling the old “don’t worry about what people ride. Just ride your bike, etc.” chestnuts around, this concerns me for a couple of reasons. One in particular being that over my years in the world of bikecycles, I have watched trends come and go, and have been reluctant of most of them until all of the turds have been scooped out of the punch bowl leaving the final revisions to prove me wrong.

Admittedly, I was well off the mark about clipless pedals and suspension forks for mountain bikes, but when those two items were first introduced to the fat tire world, I sat warily on the sidelines with my clips, straps and rigid fork while I watched the bushing pedals, inversion forks and AMP Research designs come and go.

I’ve never been one to trust what the industry claims to be infallible because 1) I choose not to throw my money into a garbage can and 2) they are often times wrong. Why, even Magura has its reservations about disk brakes on skinny tired bikes.

The bicycle world is born and bred in an environment of planned obsolescence, and because the industry that’s attempting to sell an idea says it’s the bee’s knees, is the very reason I will continue to wait on the sidelines with my money securely in my pocket simply due to the fact that they are the ones trying to convince me that it’s something I need. 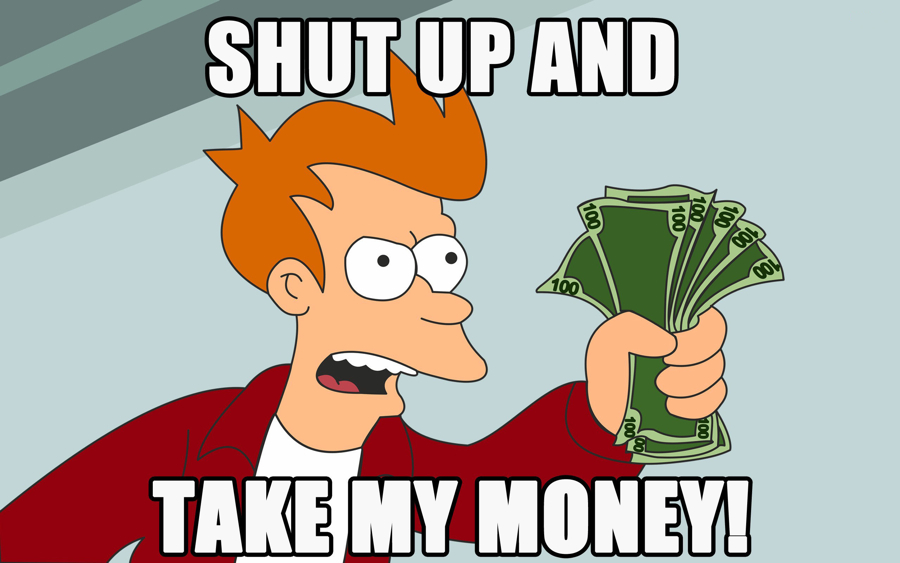 Until the day comes when it’s proven with consistency, I’ll continue happily adjusting my cantis and calipers. If in five year’s time I’m ultimately proven wrong, I’ll be the first to admit it. If I’m proven right however, I won’t say anything because I’ll be too busy patting myself on the back.

In the meantime however, I have back pats to spare, and one of which I will now offer up to Cedar Cycling. It was just this past spring when they very graciously gave me one of my very own jerseys to stank up and give a whirl to; 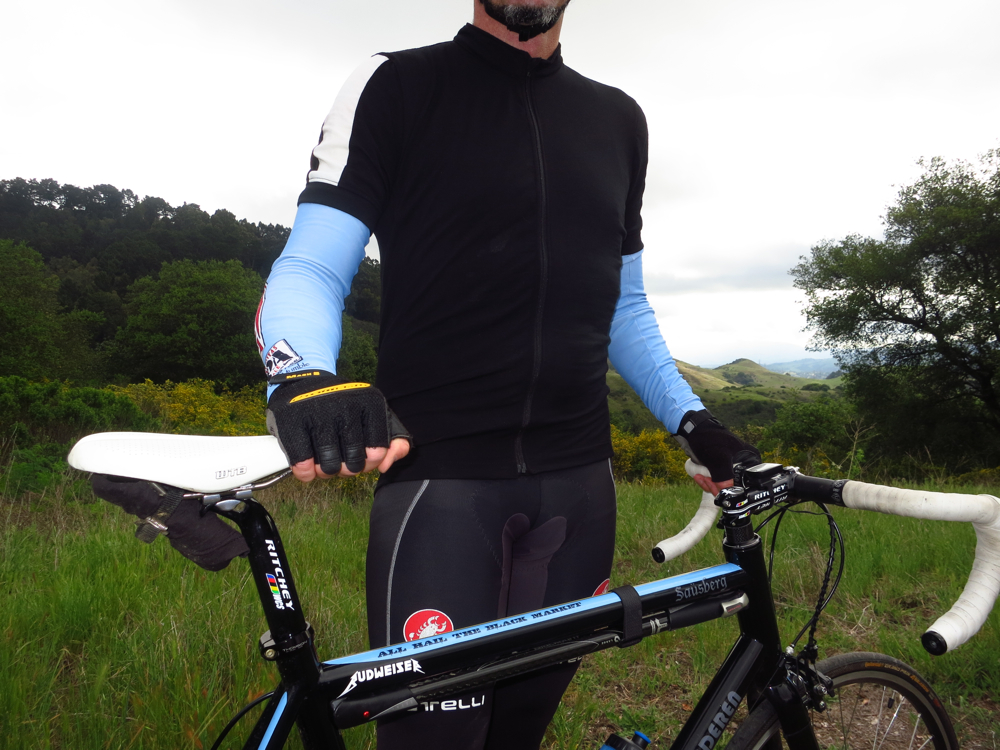 Initially I just sort of took it as a nice wool jersey (of which I have many) and left it at that, but in the months of using it, it’s become a go-to and one that I’m consistently impressed by. I’ve abused it, washed it, muddied it, slept in it, not washed it, and all of the other things one does in a comfy piece of clothing, and through it all, the fit has stayed perfectly consistent. For a wool garment, this is high praise indeed.

I would suppose that my perspective might seem a bit disingenuous due to the fact that they advertise on this site, so you can take my opinion or leave it, but for the record, if I didn’t like it, I would make no bones about saying so, because if there’s one thing I truly love, it’s hating stuff, and my Cedar jersey, I absolutely do not.

As long as I’m doling out tips of the hat, I should offer one to another Maximo Supremo resident, Rubena Tires.

I first received a set of their Krantos twenty-ninering tires back in August and even wrote a hard hitting journalistic tour de force where I like, covered price and did weight comparisons and junk.

Like most reviews however, that doesn’t really tell anybody jack about the product. So in the four and a half months they’ve been in my possession I’ve used them in summer and fall conditions on my Hunter until I had to strip that down and send it back to the factory for a refurbish, at which time I put them on my Ventana.

As I noted in this post, I was curious to see how quickly I could wear through them, and how they responded to the varying dirt seasons that the Bay Area has to offer. (In order starting and ending with with summer- dry, hero, muddy, hero, dry.)

So far their wear has been negligible, and I’ve gotten to try them in all three conditions, and though hero dirt is my favorite to ride in and tire choice really gives one little advantage, the proof has been in the pudding. The snot-slick, and eyeball packing pudding; Of course I’m not talking about trenched out mud bogs, because for the well being of the trail I steer clear of such things, but during the wet season, one naturally is going to be treading across occasional soggy patches of terra firma, and having the advantage of knobbies that keep you upright and traveling in a forward direction is one I’ll gladly take.

In my humble estimation, the Krantos(es) are a superior all season tire and because of their casing, weight, price, durability and versatility, thus far have achieved the highest marks and won them the revered award of five bloody pentagrams;

Just as I have regarding that of Lance and Oprah, it’s a gesture I’m sure the good people at Rubena will happily ignore.

15 Responses to “The shock heard ’round the world.”