They say if at first you don’t succeed, try, try, again. 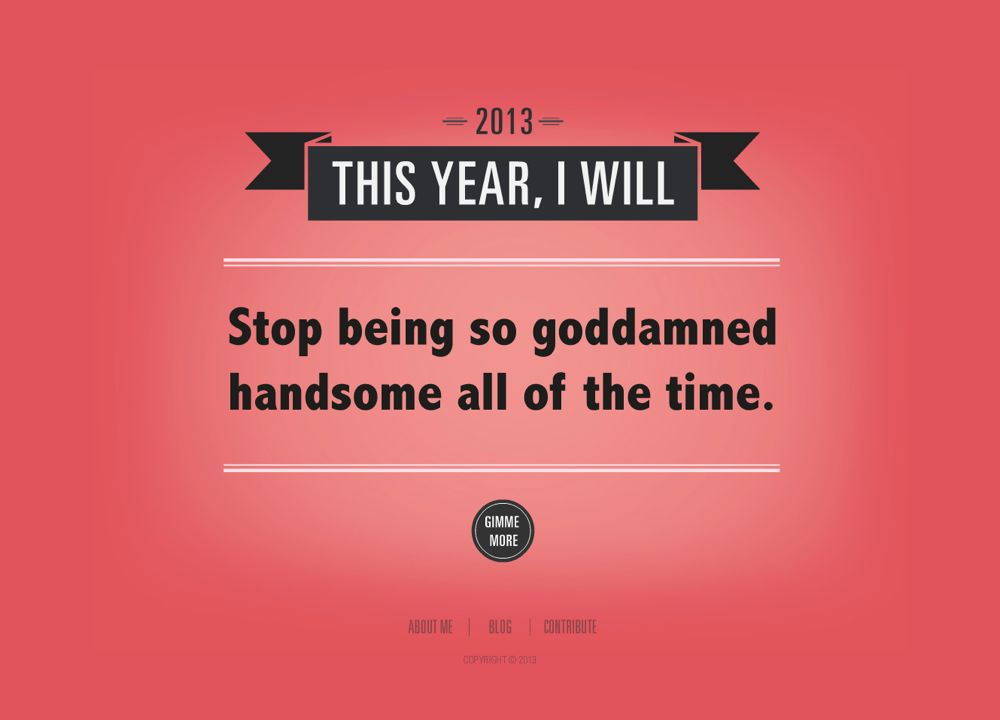 My last year’s resolution was a failure, as was the year’s before that.
But here I am before you with renewed resolve and conviction, ready to commit.

If it wasn’t, then please rest assured that with the exception of the sandwiches part, I handled the heavy lifting in those other departments for all of us.

Clearly I took a few days off from here, and spent most of my energies being focused over on Twitter, and Tumblr, and Flickr, and the AHTBM FB page which if you pay any attention to, you are still laying on the floor with a blown mind.

But now we’re back together and without any more hesitation, let us proceed into today’s effort, as our time away from one another has brought a bounty of unrelated fodder, of which we will begin to sort through now.

I was forwarded a couple of important notifications on which 2013 will be rung in aboard or at the very least, near a bikecycle.

Firstly from Mike of Maximo Supremo residents the Banjo Brothers, I got a heads up regarding the legendary Almanzo Spirit Destroyer;

I present to you a fine press release hand-crafted by your soul-brother the Duke of Hurl. As you may or may not know, Mr. Hurl was the 1st AGRS (Gravel Racing Series Champion) and therefore uniquely interested in having the event live on; 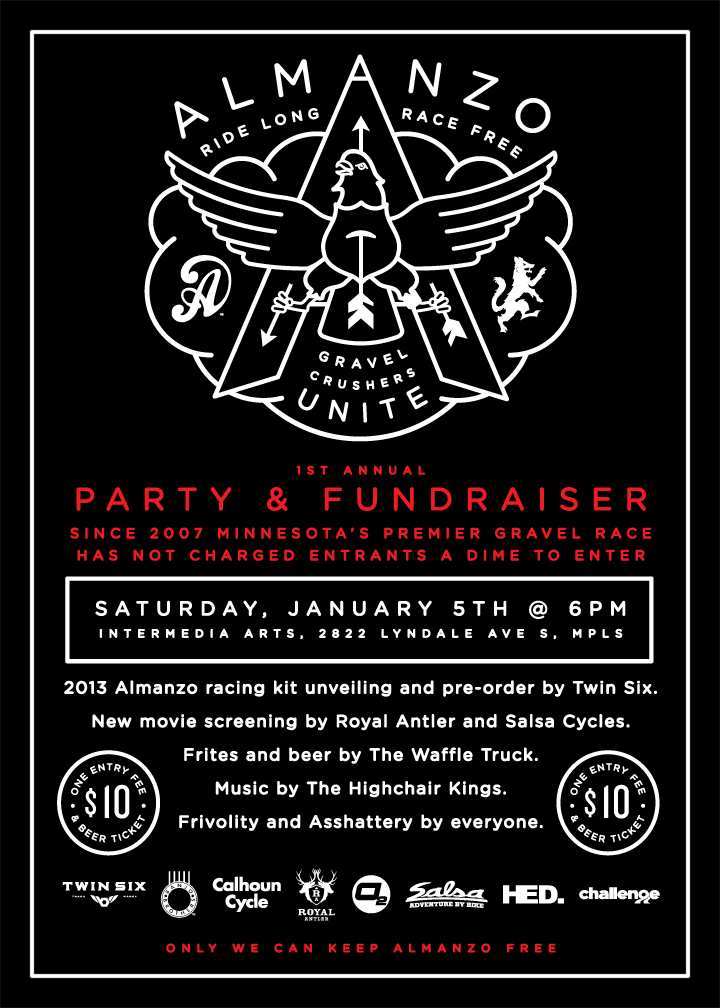 The fundraiser is Jan 5th. While there may be more noble causes to donate, file this under good news and community building.

If assisting in the growth of this monster is a thing you would like to be involved with, or you’d just like to get a spanky new kit, keep tuned in to these developments.

From Kenny I received an email regarding a ride in Philly, which is so absolutely my cup of tea, I’m actually considering getting off the couch to attend;

Just wanted to see if you could throw up some love for an event happening here in Philadelphia on January 6th 2013?

Its a ride that will take place on abandoned train tracks, double track, single track, dirt, road, run ups, log overs, creek crossings, you name it, the ride includes it. The ride is about 40 miles in beautiful Pennypack Park in northeast Philadelphia. 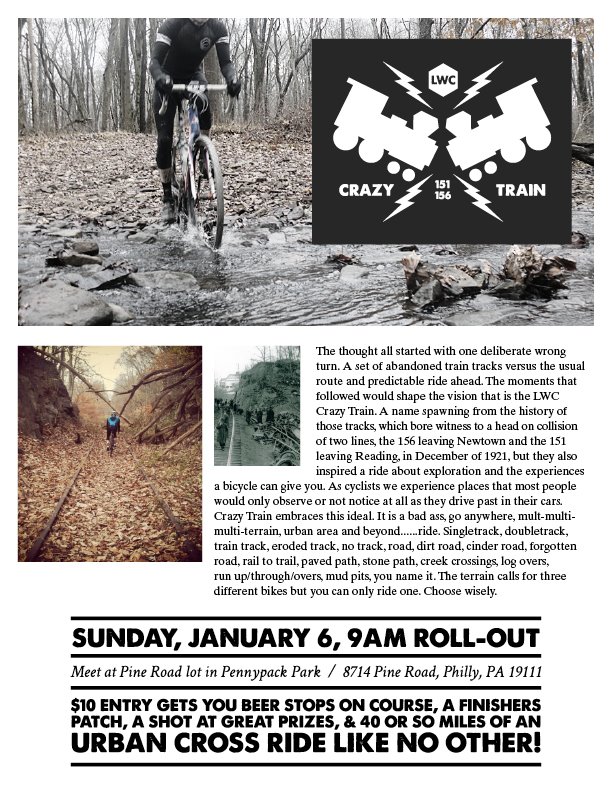 Thanks a lot dude!
Kenny Kaos”

There may be no one who is a bigger fan of random exploration of urban detritus than me. The idea of partaking in that, as well as that which has been reclaimed by its natural surroundings has always been a very exciting idea to me.

Perhaps at next year’s SSCXWCZZZZZ I can explore some of those areas with the local residents. Assuming I’ll be off the couch by then, which really isn’t a very good bet.

And speaking of just such that activity, my former compatriot at both Santa Cruz Bikes as well as Swobo, the artist formerly known as 6’7″ recently sauntered through town to engage in some bikecycle riding and lie swapping; It had been some time since I’d seen Kirk (what his mom calls him), so it was nice to catch up a bit.

-And let me tell you a little bit about this sod. Once years ago, I was at a one speed race through the mountains of Santa Cruz that had been organized by the other really tall guy, Rick Hunter. Each team consisted of three people. One local, and two out of towners. As a team, you’re given a list of items to procure (a crushed beer can, a sea shell, a cog off of Mr. Blacksocks’ old cruiser which is suspended high about the ground in a tree, and so on). There was also a donut stop somewhere along the way as well, and if two of your team members came in first and one came in fifth, then you got fifth place.

Naturally my team won, but I digress.

This happened to be the first day I’d ever met 6’7″. There I was with a fighter pilot-like focus, descending a winding and technical stretch of single track, with every bit of skill I could muster, and just ahead of me on a beat-ass yellow cross bike with flat bars was Kirk. No matter what I did, I couldn’t pass him.

I’d never seen people do anything like that on a cross bike and it was one of the things that inspired me to later do several mountain bike races on one and generally treat it as a mountain bike, which might explain why my wrists and shoulders are so jacked.

So for the inspiration as well as the constant discomfort, I owe Kirk a great debt of gratitude. 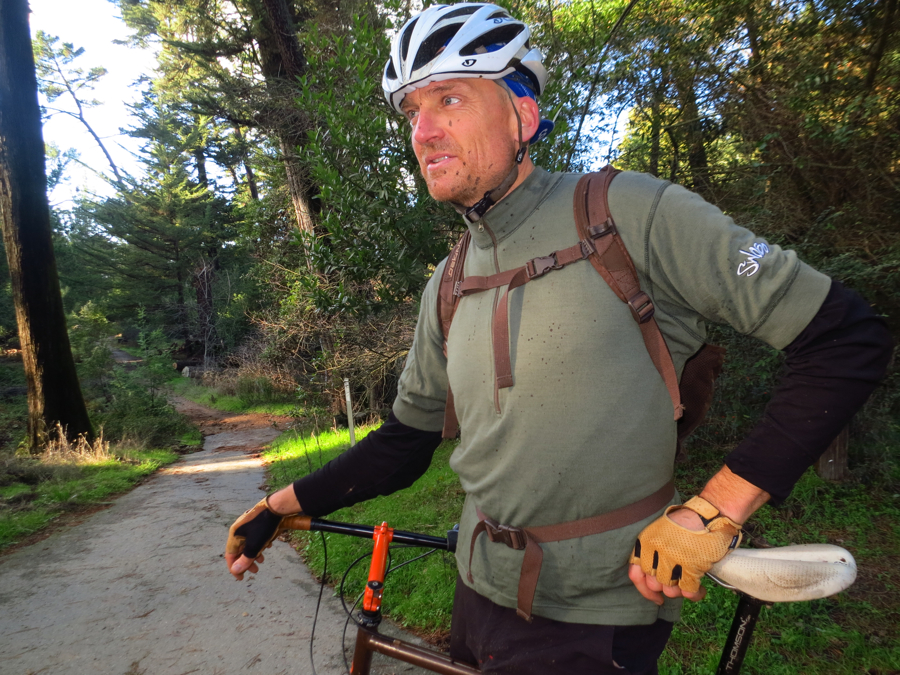 Someone who knows a thing or two about mystery pains is Steve Crandall, who is neither the fattest, nor baldest man at FBM;

Your readers will hate this-

I uploaded the Full Thousand Yard Stare FBM video, If you could share it, that would be rad!

Hope All is well man-
Cran”

You know what my readers hate? Being told what they hate. This video on the other hand, will probably fill all eight of them with a sensation not a lot unlike joy.

So now that we’ve killed another four (point) five, to eight minutes together, allow me to say thanks for sharing some of the first day of the rest of your life, and presuming I don’t (or all eight of you don’t) win the lottery in the next forty eight hours, the third day as well.

4 Responses to “Tomorrow’s the second day of the rest of your life.”