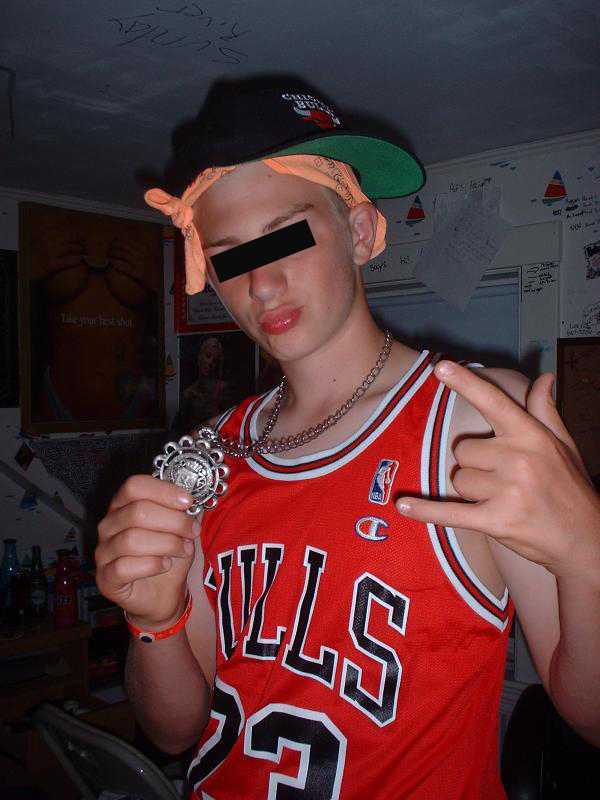 In reference to a similar living individual as the one depicted above, these words were once uttered in a sarcastic tone by my ex-pat friend Sara, who also happens to be the one who originally came up with the ‘Stevil Kinevil’ moniker. While sitting here, still basking in the glow of Monday’s post they just came to me, so for the sake of fluidity, let’s just roll with it and see where it takes us.

Not having to do with living clichés in the least, Jesse, who is one of the two heads at Handsome Bicycles sent me some information regarding their newest collaboration;

“Yo Stevil,
The next Shop Bike collaboration launches today; 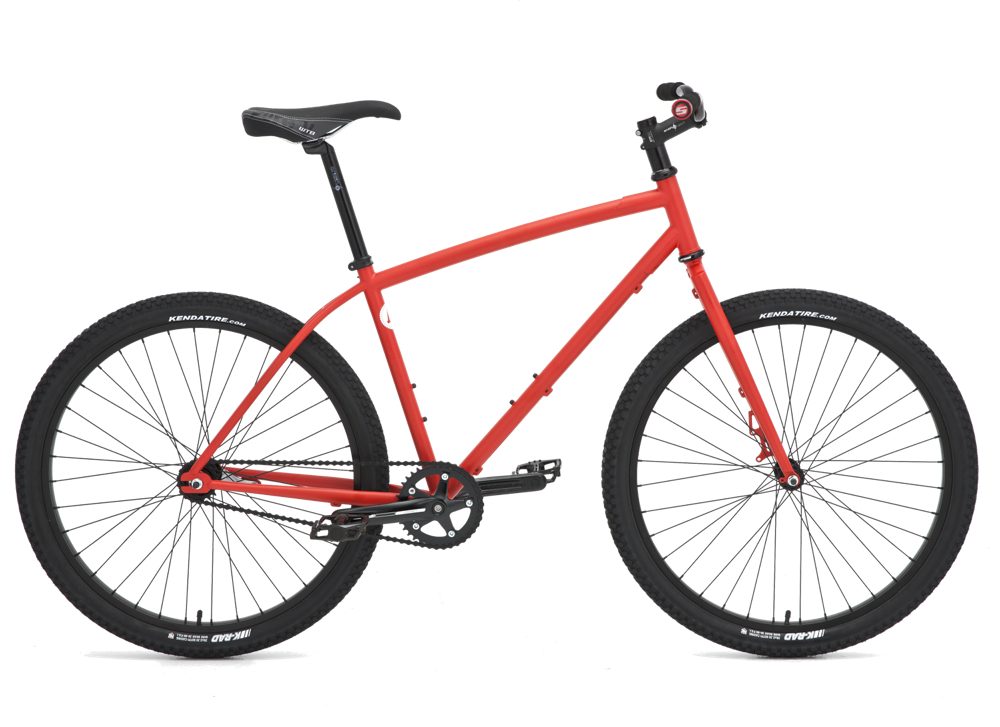 We have teamed up with ARTCRANK to benefit World Bicycle Relief.

If you want any other info, feel free to call.
Cheers.”

I did call, but I just asked if hey had pop in a bottle, and then I hung up.

And speaking of Handsome, just this past weekend they cut the ribbon on their new concept store right there in downtown Portland East, in a space next door to One On One Bicycle Studio. Obviously, I wasn’t in town for the throwdown, because I was busy not being in Denver for the N.A.H.B.B.A.E.W.G.D.W.T.R.A.O.M.T.S.L.D.C.O.G.O.F.B.S., but fortunately for the eyeballs of all of us, Paved and BIKE Magazine’s own Morgan Meredith was there with his camera in hand, and has provided us with a smattering of visual stimuli; 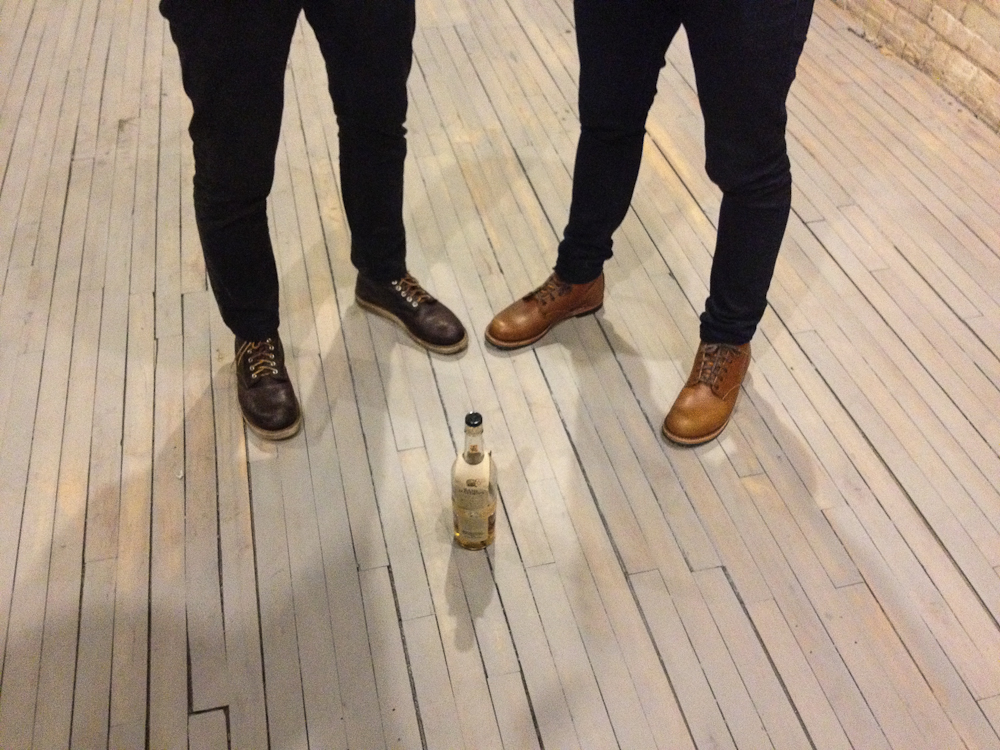 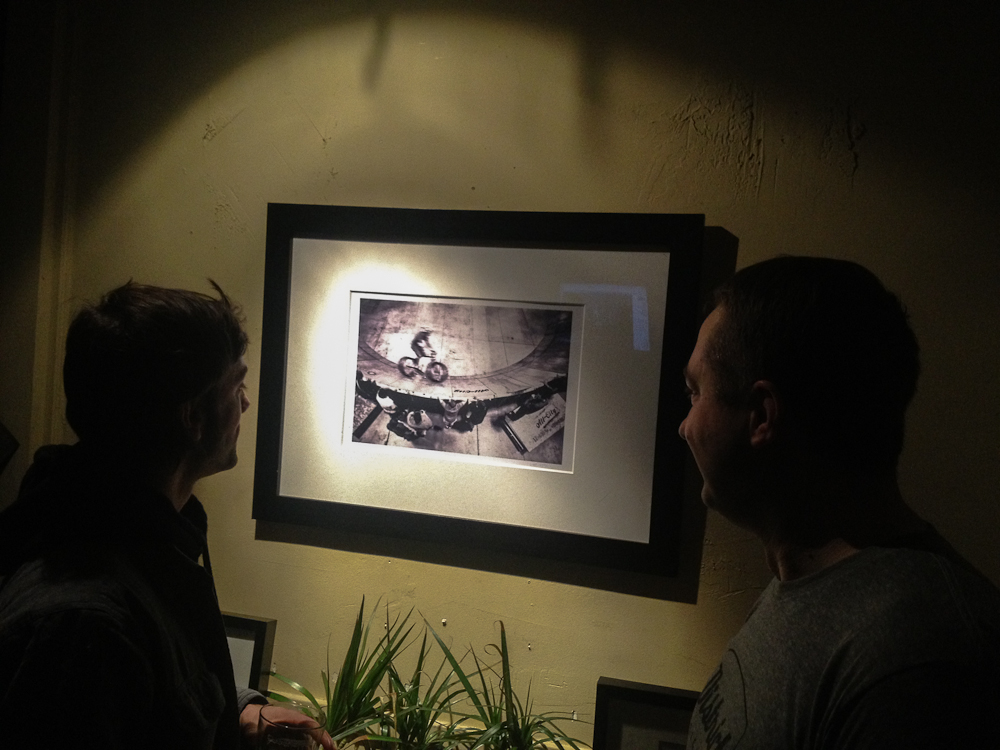 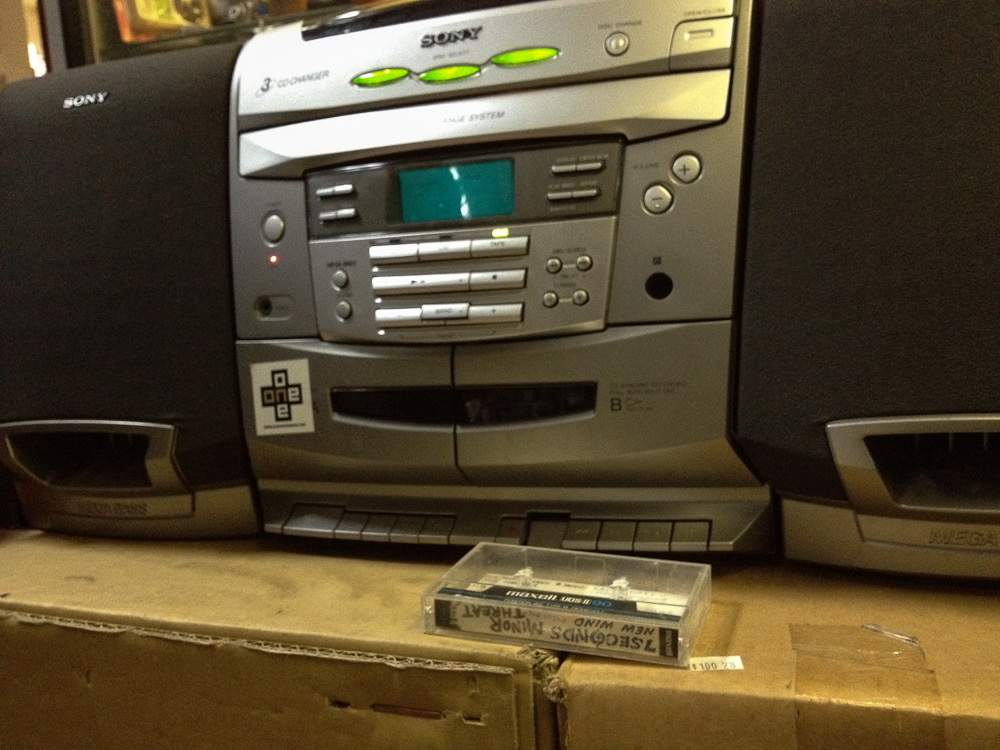 “What is that bike SK and Anna are so seductively lounging next to?” you might not be asking yourself in a non-inside voice.

Well, that my friends is the brand new All City disked out Macho Man; 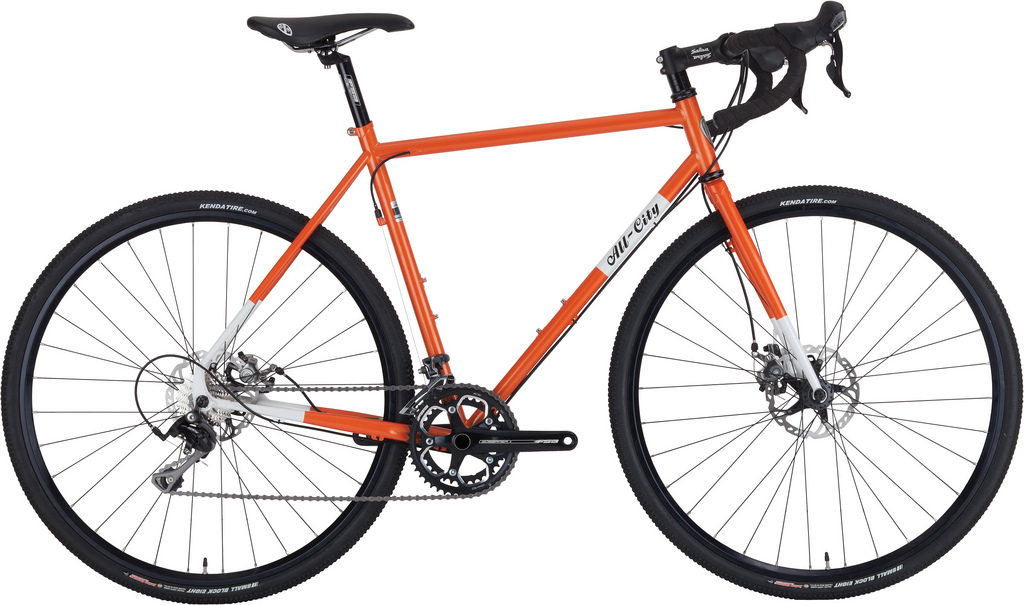 For a road, or cyclocross racing application, I’m still not sold on disk brakes. As a matter of fact, between Adam Myerson, Mark Savery and myself, there might not be three bigger opponents of the trend, but for a, ahem, gravel grinder, or a mountaincrosstylebikecycle, I’m beginning to see where they have a place, and I’d be lying if I said I didn’t feel a slight movement in my pantal region when I first laid eyes on the Macho Man. (Both the bike, as well as the person.); Further more, I’m sure he would be touched that All City did him the honor by choosing to paint the bike in the same orange tint as his skin.

And kind of speaking of all of those goings on, QBP hosted their annual Frostbike extravaganza which was an opportunity for vendors, dealers and all of the Koolaided-out immediate family to get together and learn new things about new things and compare war stories.

Again, we should count ourselves lucky, as Hugga Potato from Cars-R-Coffins loaned some words regarding what was up with what went down;

What a weekend! No, I’m not talking about NOBBS, I’m talking about Frostbike vs. Cutter’s Ball in Minneapplenuts. Friday night the action got rolling pretty good. After having some crackhead Jimmy John’s manager steal my Mission Workshop backpack from One On One after hours, then recovering it thru some auspicious serendipity while walking back from the pizza joint with Murph & Skogen (true story), we jammed econo in the new Handsome Cycles space with a stellar crüe including Sram, Bike Mag, PDW, & Almanzo all taking turns on the new (previously noted) Artcrank+World Bicycle Relief Shop Bike, and then absconded into the night toward the All-City Cycles party at some swank secret location off of Loring Park.

All-City is trying to own the hashtag #partybrand, but throwing an invite only private party might be closer to #countryclub. Still, they did allow a bunch of dirtbag current, & former bike messengers crash the jam, and while no one was arrested, there were some tense moments. Overall, things went pretty good, since local hopheads Fulton Brewing were flowing the beer, and I did have a chance to catch up with my old friend Basil Hayden…. Which goes a long way in explaining why, when Skogen picked me up at 7:30 the next morning to hit the show floor, my rotator cuff felt pretty taxed.

Pushing thru the smokescreen, we arrived at QBP, where, I might add, we had no trouble getting our credentials, and joined the stampede for the first run at the scratch-and-dent table. Lot’s of tempting OE stuff; in the end, I bought ten saddles @ $4/each, and some Avid brake levers for $1.96. The fog was still lifting so we walked the show floor. Frostbike is a lot like Interbike, except it’s much smaller, more intimate, and there’s less beer. There were also fewer beards and/or pot smokers, which we attributed to Colorado’s legalized status, surely the true draw for NAHBS this year? What there is though, is free food, very good free food, so we hit the lunch room for some of this; 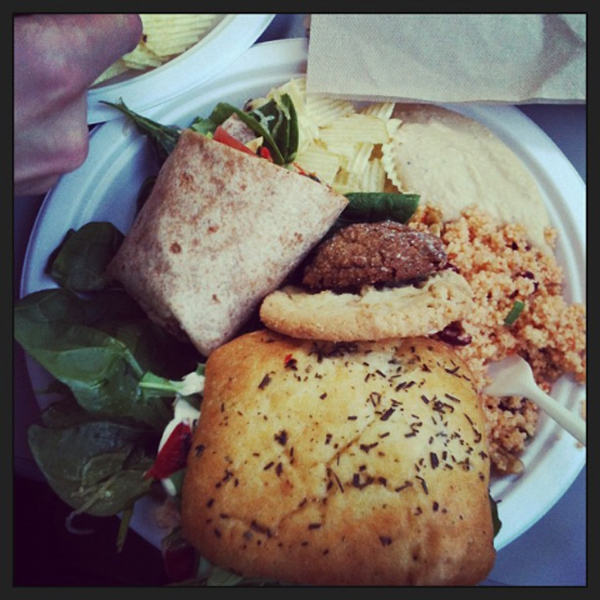 The remainder of the afternoon was spent checking in with homies & homettes from the industry, taking photos of the new Challenge Almanzo tire; 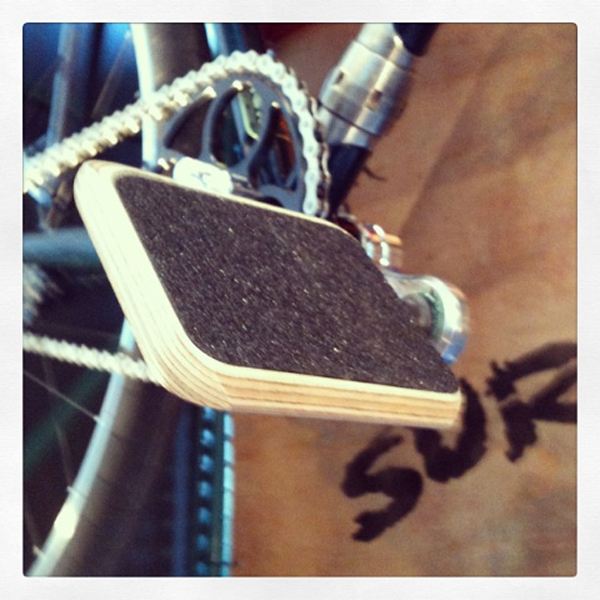 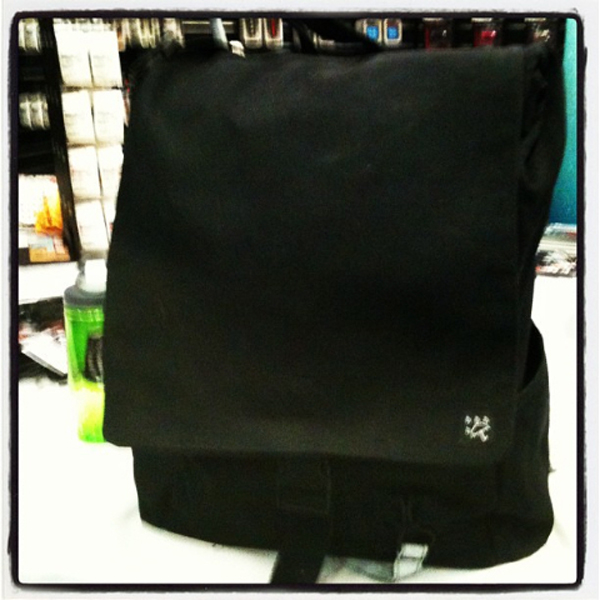 –(it’s well known that I am a bag junkie. If there were methadone clinics for bag whores like myself, well let’s just say the Bros. Canvas pack elicits something akin to lust–), and preparing for the impending cavalcade of beer yet to come at Handsome Cycle’s Cutter’s Ball that evening.

Cue Morgadeth’s photo’s. Sunday I checked out. Instead of hitting day 2 of the show, I went for an actual bike ride as part of my recovery.

Wish you were beer,

I feel a bit light in the head just reading about it.

It is with the conclusion of that, that I say, ‘see you Monday, March fourth‘, as I tip my hat Southward, and depart for Palm Springs for phase two of the AHTBM team training camp; 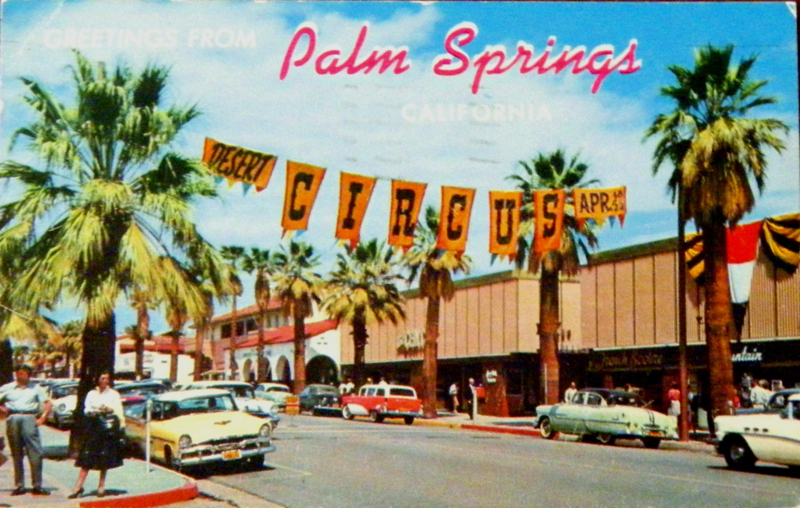 As the team manager, captain, masseuse, and pretty much only member who is attending, I have reserved a crushed velvet track suit, slippers, and golf cart to be waiting for me, if only to stay true to the ‘when in Rome’ adage.

And there’s nothing gonna be cliché about it.

11 Responses to ““Don’t you dare live your cliché around me.””