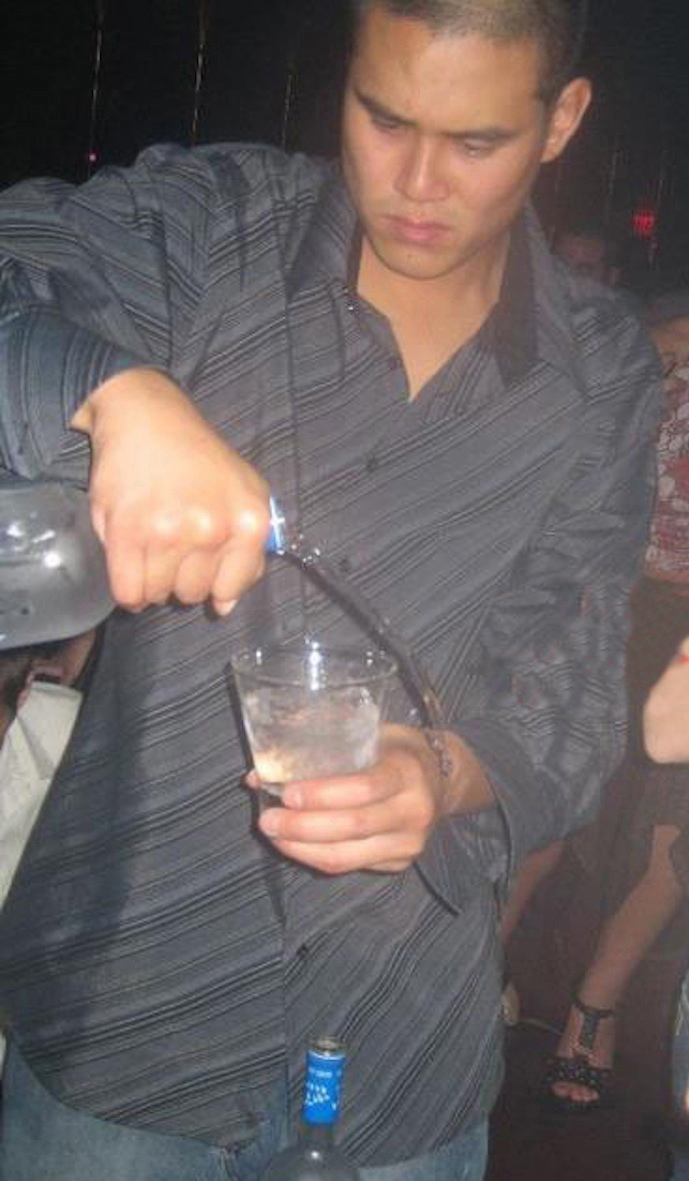 And when we’re partying, our aim gets a little off.

That’s not an impossible problem to solve though. We just need a wider glass.

Are you ready for a regurgitation of the web’s best bestness? I’m sure you are, and I’m just the man to bring it to you for at least the third or forth time this week.

First up, a couple of weeks ago I was bestowed a bit of greatness from Chrome in the form of a new pair of shoes, or as the kids say, ‘kicks‘; These new shoes, or ‘kicks‘, are called the Truk Pro, and are good for not only both walking and riding, but probably shuffling, electric sliding, and skipping; Upon pulling them from their box, I immediately removed the replaceable cleat plate; (Which by the way is an awesome feature), and after rummaging around my junk boxes, found a spare pair of cleats to install; *Editor’s note- I run my cleats all the way back, (as depicted) but due to the space available, had to move them forward about an eighth of an inch in order to properly engage with the pedal.*

And speaking of awesome features, Chrome has very thoughtfully included an internal patch inside of the shoes to keep out the bum pee and unicorn tears; It’s the little things that add up to a lot.

I’ve been sworn to secrecy on these until yesterday, so being the stand up fellow I am, it wasn’t until then that I took them from out of hiding and actually used them in a real world application; I can say that in my short time with the Truks, I quite appreciate their quality, low-profile good looks and Stiffy McStifferson soles.

Like with anything I get the opportunity to try out on this here web site, the proof will be in the pudding and I look forward to revisiting this topic after I’ve had adequate time in which to attempt thorough destruction of them.

In other news, on Monday Lucho of Cycling Inquisition sent a little slice of his handywork titled ‘Riding Bikes Is Easy. It’s Getting On Them That’s The Hard Part‘;

“From Sunday’s Milan San Remo. The moment it happened, I knew I had to make an animated GIF of it.”

Am I seeing things, or is he actually waving for his bike to follow him?

Now I’ve never done the Milan San Remo before, or for that matter, any road race that involved anything aside from riding around a circuit in amidst blocks of abandoned looking business parks. These are called ‘crits’ and I’m horrible at those as well. Anyway, having never participated a real, honest to Dog speedcycle race before, I have no idea what kinds of visions, delusions and complete neurological breakdowns a participant might experience.

Perhaps running away from your bike and then offering gestures of encouragement for it to follow you might be exactly how I would respond at kilometer one and twenty.

Assuming my heart hadn’t exploded by then.

So with that in mind, it came as a bit of a shock a few weeks ago when The New York City Snob About Bicycles carrier pigeoned me with a request to play a Dutch speed cyclist in the newest promo video for his upcoming book;

Thankfully the creative department responsible for the clip was able to use CGI and make me look ten feet faster than I actually am.

In other news relating to bikes, and web presence, Gypsy The Punk sent a nice email which I was very glad to recieve, and then forward on to a few entities residing within the ivory towers of Chez Maximo Supremo;

Not really. Well, you can kiss me, but I’m not Irish. I am however a fan of both Irish whiskey and Irish writers.

As is my wont, I did as I do every year on this day, and took my bike out for a ride wearing a green jersey whose pockets were armed with a flask of Jameson and a paperback book. This year’s selection was “The Unnamable” by Samuel Beckett.

“The tears stream down my cheeks from my unblinking eyes. What makes me weep so? From time to time. There is nothing saddening here. Perhaps it is liquified brain.”

Anywho… I was writing to tell you that you do a good job selecting those Maximo Supremo advertisers of yours. My latest franken-bike contains parts from several of them. I have pieced together, from no fewer than four other bikes, a torture device so uncannily painful that satan himself has emailed me for schematics. I’ll be riding this bad boy at the Whiskey 50 this year; Because I hate myself.

Why else would I ride a rigid singlespeed on a course (curse?) that has more than 7000 feet of climbing? I have a bet with a local young buck. He is 20 years younger, 40 pounds lighter, and riding $8000 more bike than me. My challenge? If he doesn’t beat me by more than an hour, he owes me a case of beer. If he does beat me by more than an hour? He gets nothing. He’s 20 years younger and 40 pounds lighter. Why the hell should he get a prize for beating an aging punk?

All I have going for me is a willingness to suffer.

Punk rock is as punk rock does,
Gypsy”

Among his selection of bits and pieces he has a Surly bike, Paul brakes, a Soulrun tool bag stuffed with Portland Design Works goodies, and the whole shibang is rounded out with a Giro helmet which protects his twenty year older and forty pound heavier brain.

Getting this communication from him did my heart right, as it served as proof positive that I’ve partnered with a tremendous group of people whose products and personnel I have always stood in solidarity with.

Though I can’t always hit my glass with the libations I pour, I know for a fact that I’m at least doing that much right.