Well, we weren’t exactly in bat country, but the landscape was close as we touched down in the aridly bucolic environs of Palm Desert for stage two of the AHTBM team training camp.

Now understand dear reader, I’m not the sort of team manager/captain/masseuse who loads up a van with the entire team and brings us all to a place to train together. I can’t even afford a burrito between the lot of us, but I can at least twist my parent’s arms into letting my considerably better half and myself come meet them for a weekend, so that’s what I did.

Day one of A.H.T.B.M.T.T.C.’s second stage consisted of getting off the plane, going to dinner, and coordinating a plan of attack for the next three days. Oh, and also testing the local reserve of Maker’s Mark. There was some of that as well.

Waking up bright eyed and bushy tailed on Friday, my folks asked us what we’d like to do. “Eat breakfast” we said. “And ride the Palm Springs tram.“; 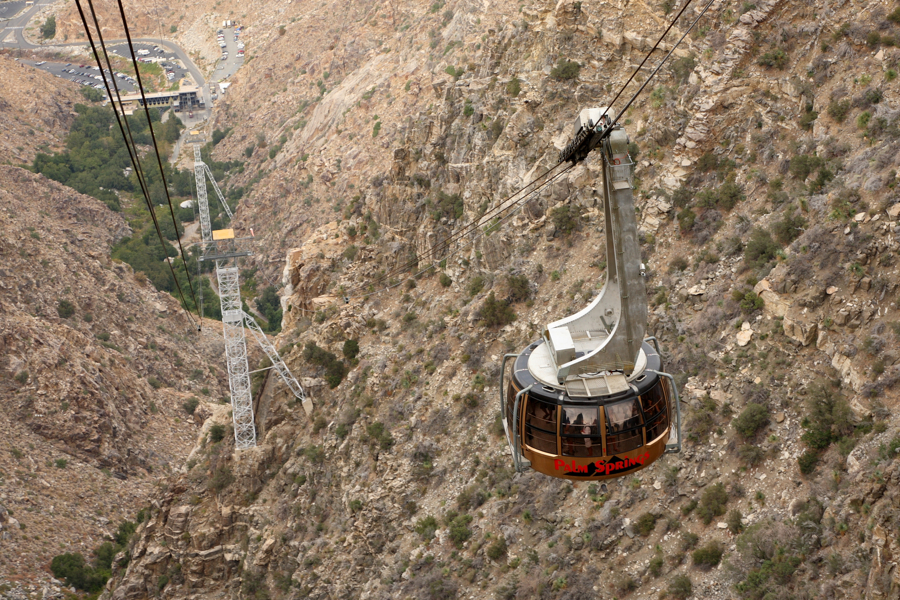 I’m positive we ate breakfast, but for some reason I have no memory of the tram, which makes me think we didn’t do that.

It made no difference though, because there was the serious matter regarding training, which was why we were in town to begin with. After going on a walk, we sat pool side for nearly three hours and as the team captain, my job was not only to inspire and motivate, but to impart my wisdom regarding nutrition; 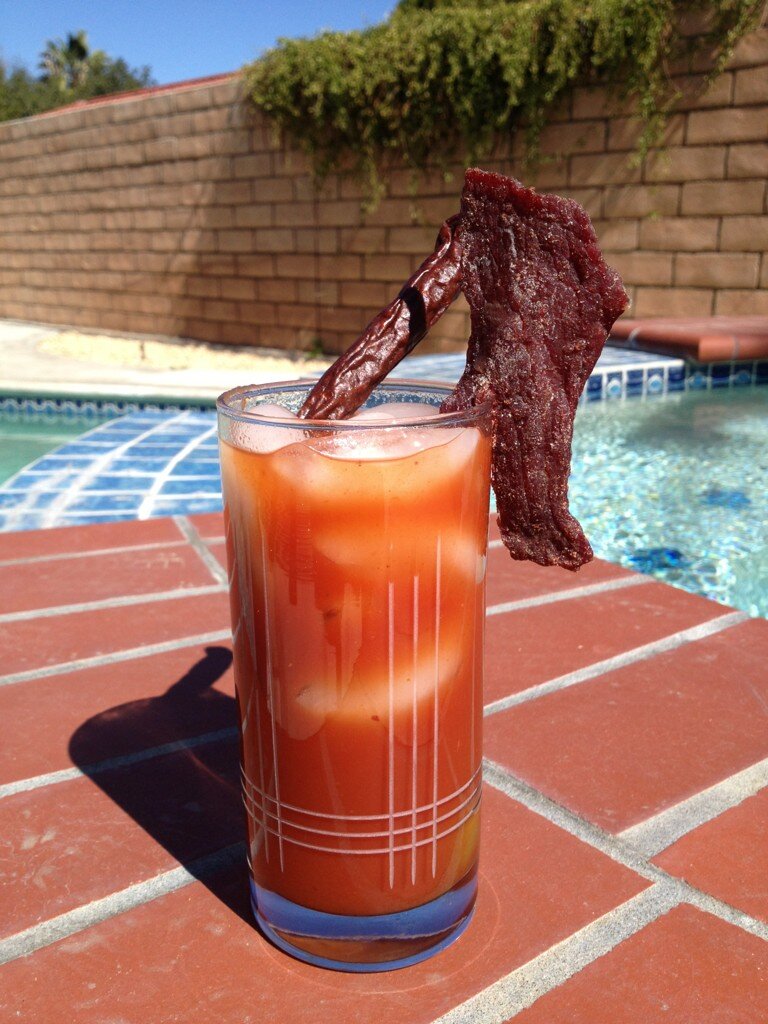 And just so you don’t wrongly assume that the health benefits of this particular protein shake weren’t overlooked, there is not one, but two olives hidden within the crimson murk.

With day two officially in the books, the team decided to celebrate by going out for dinner and drinks, where we discussed, among other things, details of this season’s roster, race schedules, obligations to sponsors, various tactical options, and what we should have for dessert.

Day three promised to be the punisher, as it was the day we actually rode bikes. All of us were simultaneously anticipating and dreading this day, as it was the only one so far that involved actual effort. So at the conclusion of the final bite of salted butterscotch pudding, we returned to home base to call it a night.

At the crack of dawn, Demonika and I did a bit of last minute prep work, as we drafted a cue sheet to go along with our collectively vague understanding of the route upon which we were about to embark. Sixty to seventy miles across the Coachella Valley, and seemingly from one end to the other. Before we were even outside of city limits however, I saw evidence of the Great Golf Cart Uprising of ’97, when golf carters from all across the land banded together for their rightful use of the public roadways; 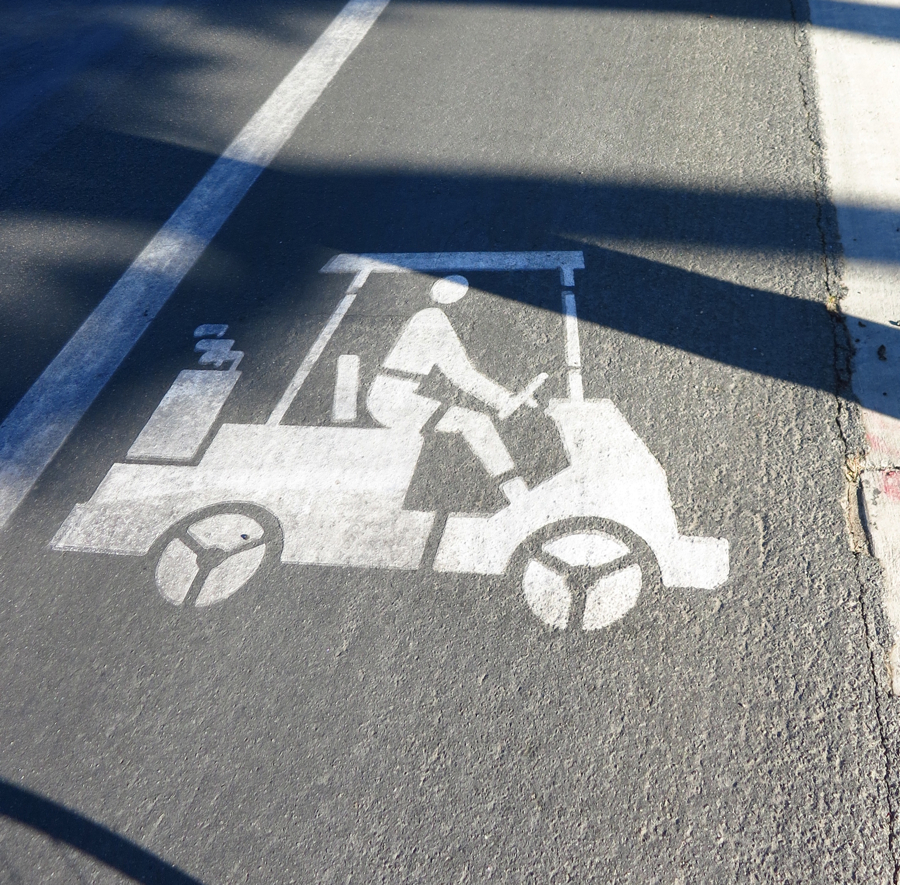 It brought a tear to my eye, and I hoped against hope, that one day the same privileges might be extended to all of my two wheeled brethren and sisteren.

Finally, with all of the faux-dobe (I made that word up yesterday) eyesores behind us, before we knew it, we’d crossed Highway 10, and were in the sticks, well on our way to nowhere; 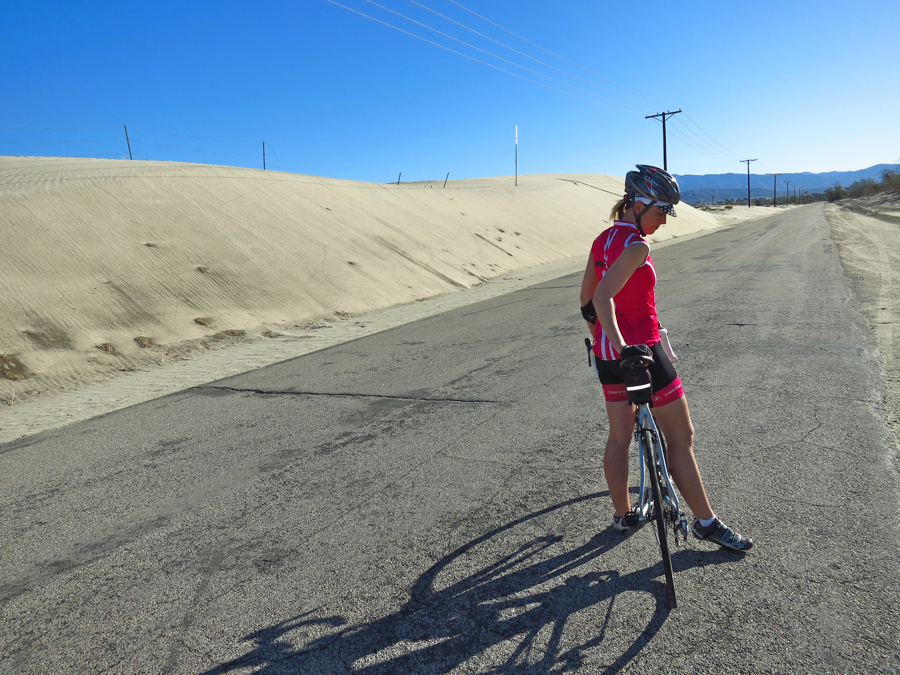 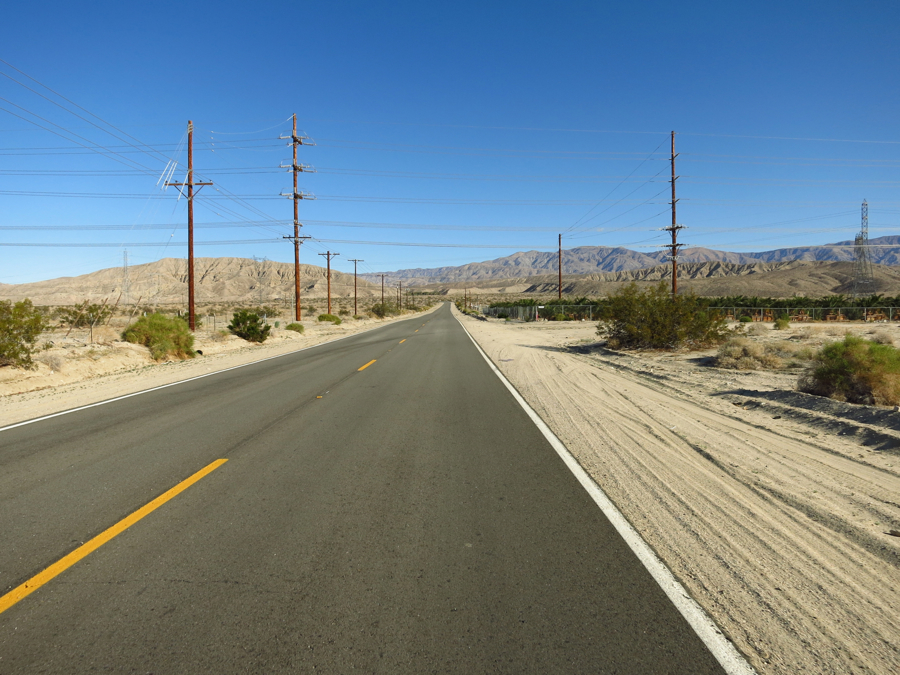 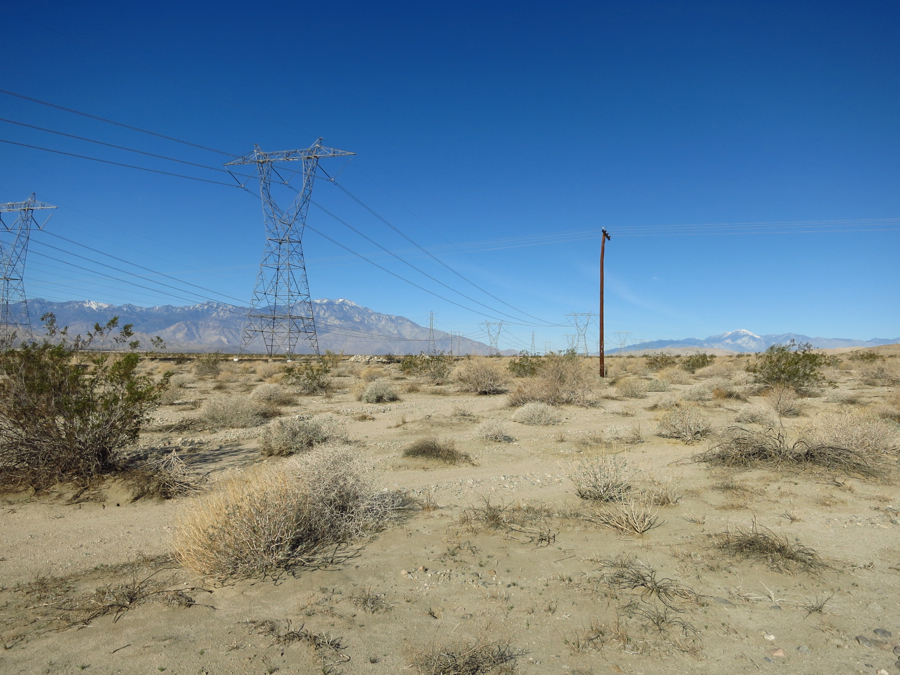 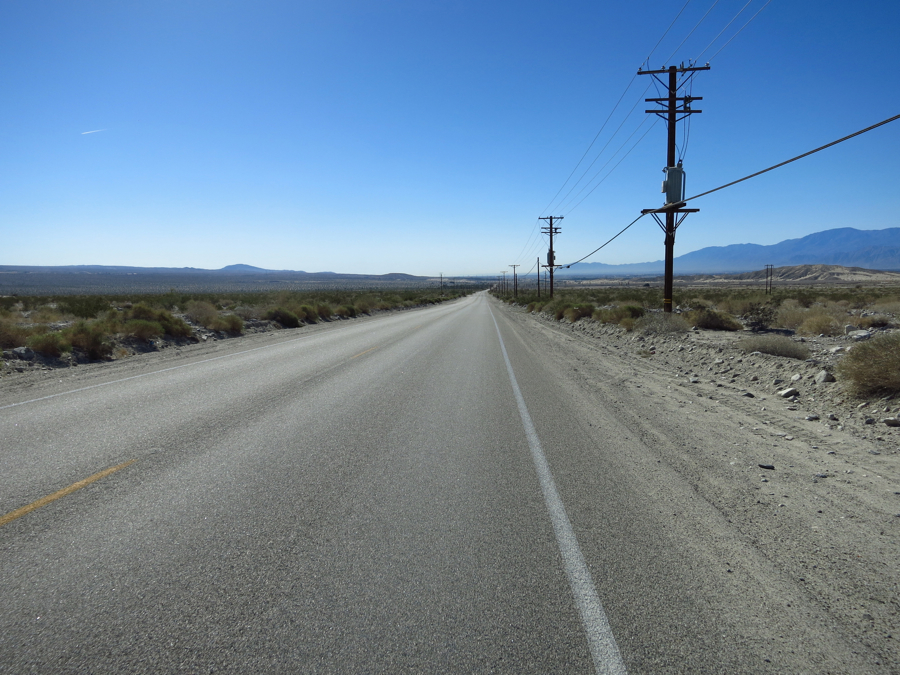 It veered right, and did; 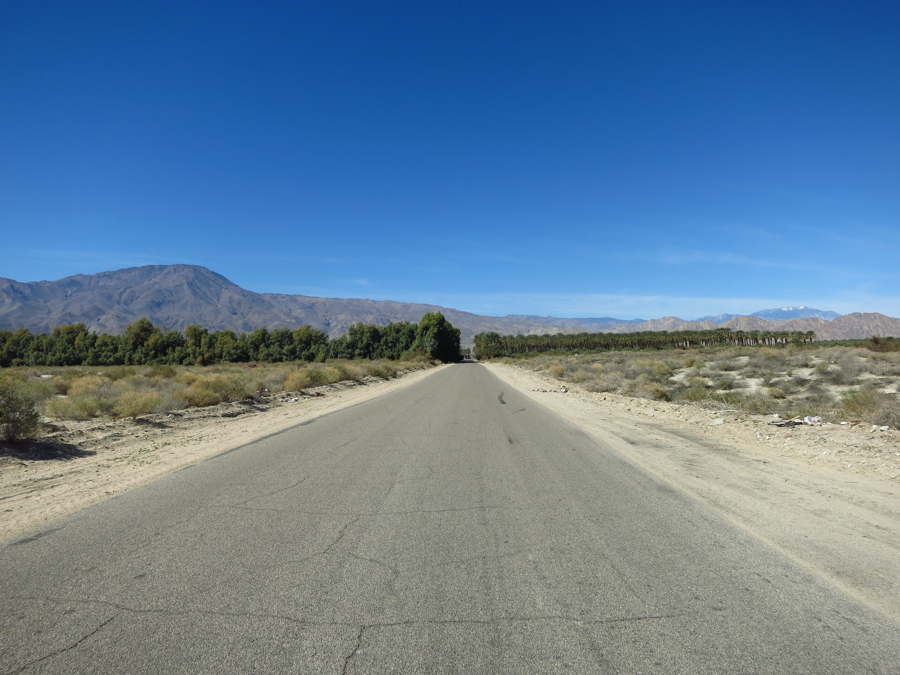 Coming from the lush hills and valleys of my sweet Central Colorado, and Northern California homes, I was a stranger in a strange land to be sure.

The expansive horizons and unrelenting landscape is as breath taking as they are potentially hostile.

After a solid six hours in the saddle, we finally opted to turn it back towards headquarters where a heated pool, high dive, and grape snow cones awaited us.

After all, we’d put in a good effort for the day. I suppose we’d earned it.

As the sun set on our time at the 2013 A.H.T.B.M.T.T.C., we ran the clock out on our final day by eating a big homemade feast after which we watched back to back episodes of Too Cute;

Nobody ever said team training camp was going to be a cake walk.

With the sun creeping into our bedroom early the following morning, I began having visions of dancing coffee beans in my head. I shuffled out to meet my mom and dad who clearly were awoken by the same thing. As we all converged around the dining room table, the four of us commiserated on the fact that this had been the best training camp ever, and that we very much looked forward to doing it all over again next year.

Finally, our chariot was ready to whisk us off to meet our flight home. With bags full of dirty clothes, and even dirtier team kits, we warily trudged through the airport en route to our big flying germ tube, when I spied this fellow; 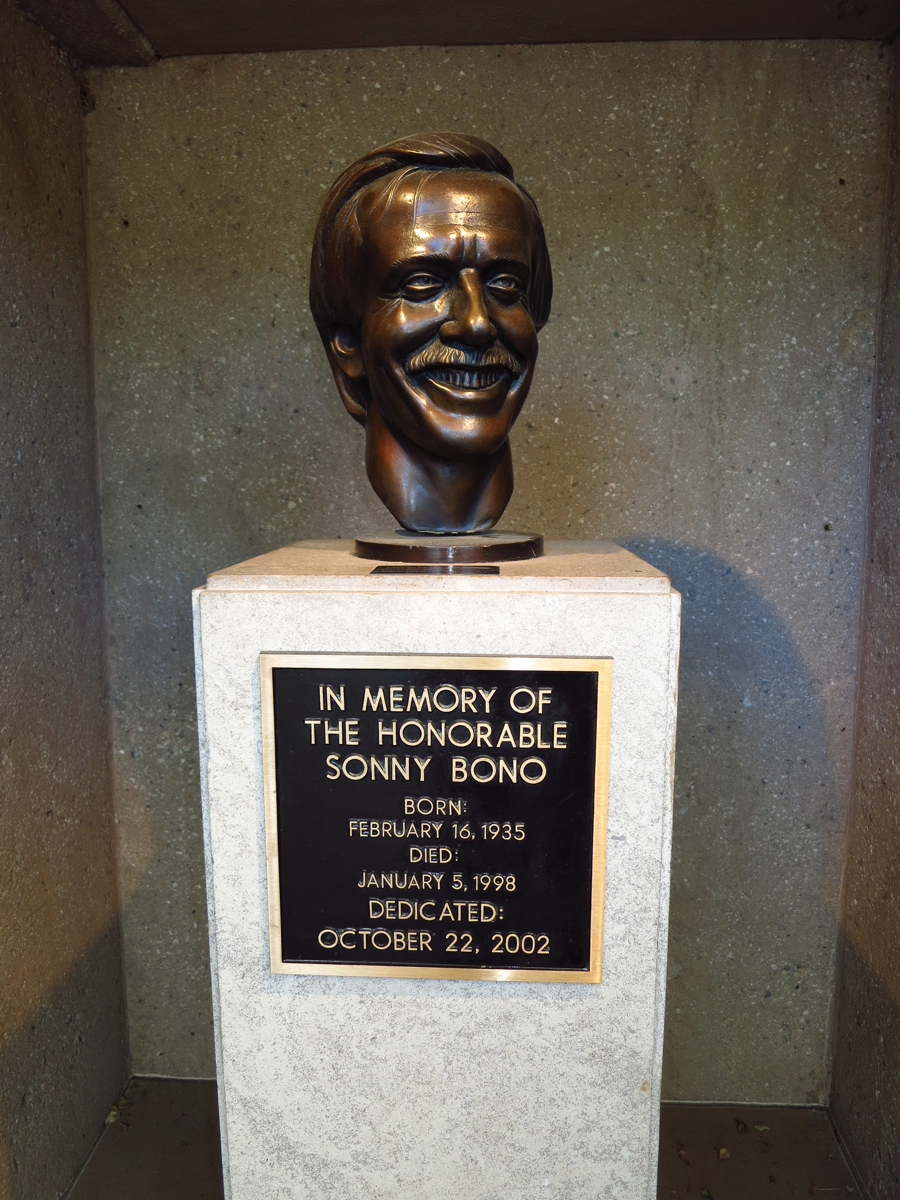 As I stood staring into his face, I could have sworn I heard his voice on the wind-

“We had two bags of grass, seventy-five pellets of mescaline, five sheets of high powered blotter acid, a salt shaker half full of cocaine, and a whole galaxy of multi-colored uppers, downers, screamers, laughers… and also a quart of tequila, a quart of rum, a case of Budweiser, a pint of raw ether and two dozen amyls.”

That quote can be attributed to Hunter Thompson you say? No… I’m pretty sure it was Sonny just simply referring to what greased the wheels of his marriage;

With fear, loathing and all.

11 Responses to “Fear and loathing.”