And when I do, it’s full of eggy deliciousness. 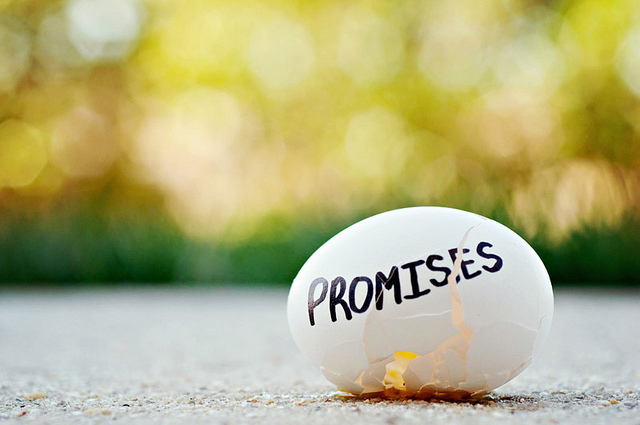 Hello mother’s, fathers, sisters and brothers. I’m back from the land of smog and beaches with tales to tell, nearly all of which have something to do with getting so drunk I couldn’t find my face if you hit me in it. (By the way, I just made that colloquialism up, and if anyone would ever like to use it, please send me five cents per, to PO Box 27168, Oakland, Ca. 95062).

So to recap, I flew into Long Beach to meet up with my friend Bill whose band O ZORN! was to open the following evening for Zeke’s twentieth anniversary in the town of Costa Mesa, which is somewhere in Orange County.

Upon speaking to Bill a day earlier he said he would fetch me from the airport, we’d do a couple of errands, and then head back to Sunset Beach where things would most likely go downhill.

And downhill they went.

Now understand, that for as long as I have been partaking in the debauchery, and with my many years of Interbike attendance as my guide, I have honed my skills to a fine point, and have become a master at tempering the downward slide.

Like racing a mountain bike, if you go too big right out of the gate, chances are better than good that you will find yourself running out of gas before you’ve crossed the finish line.

Despite this being my Golden Rule, and one that I thought impossible to break, as soon as I was done with my final bite of lunch, our compatriots at the bar where we were dining were throwing shots of bourbon at us as fast as we could consume them. At our sixth each, and equal number of sixteen ounce cans of PBR, we thanked our new friends and made a hazy stumble back to Bill’s beach front bungalow; 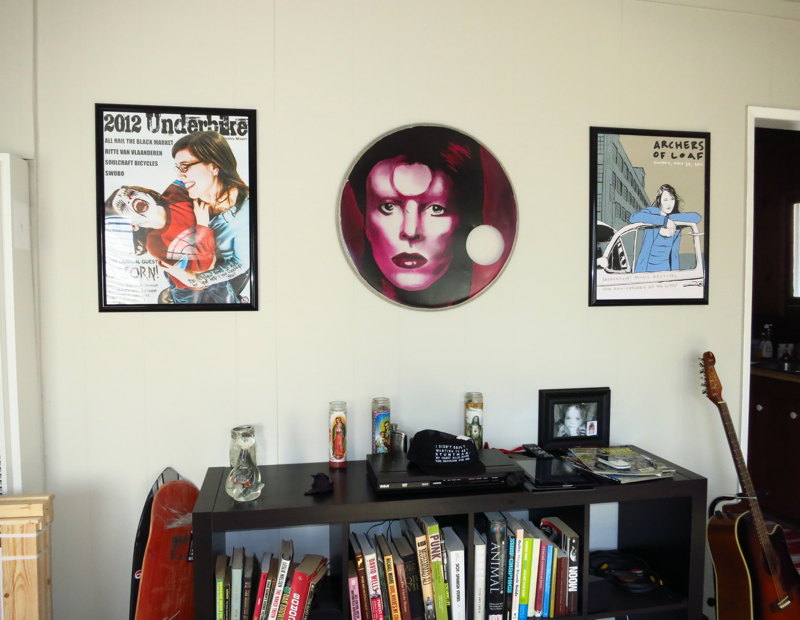 To our two awaiting twenty packs, and whatever the hell this stuff was; 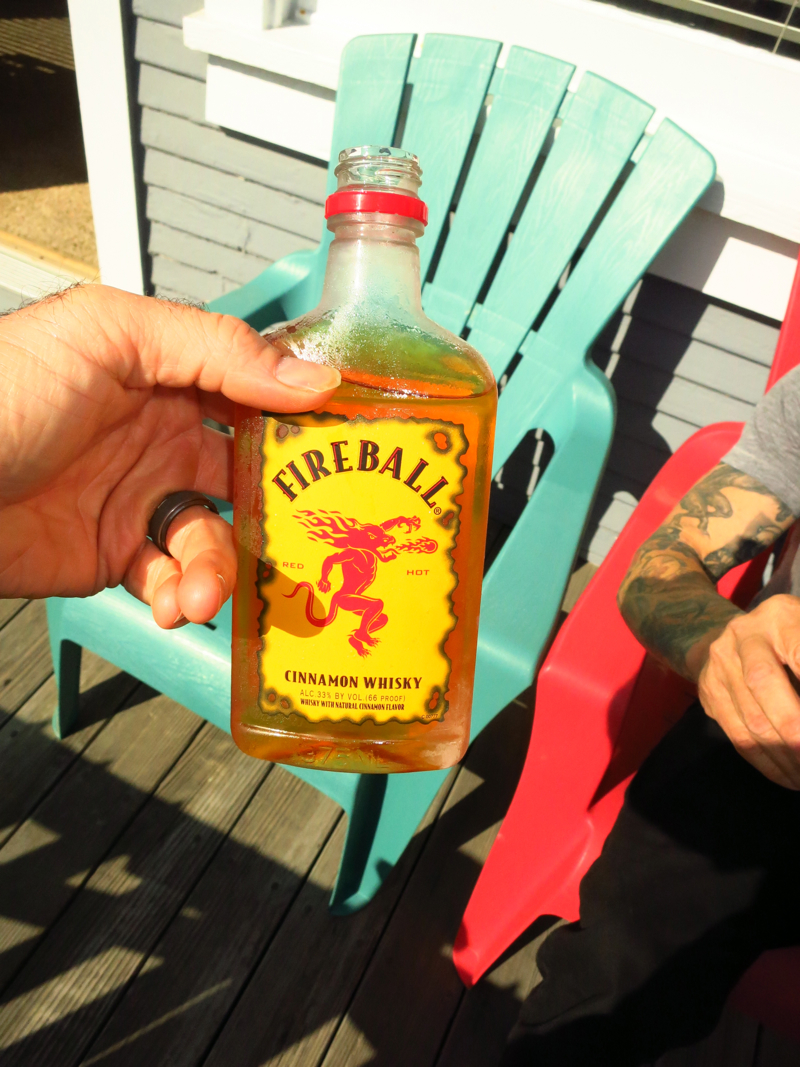 At this point things got real sideways and for an outside observer most likely resembled two toddlers attempting to engage in conversation with one another;

Strangely, we were wearing the exact same thing.

Finally we hit the wall and then promptly fell into slumber on whichever surfaces were closest. Perhaps two or three hours later we awoke simultaneously and Bill emerged from his room announcing the following query;

“IS IT TOMORROW RIGHT NOW?” 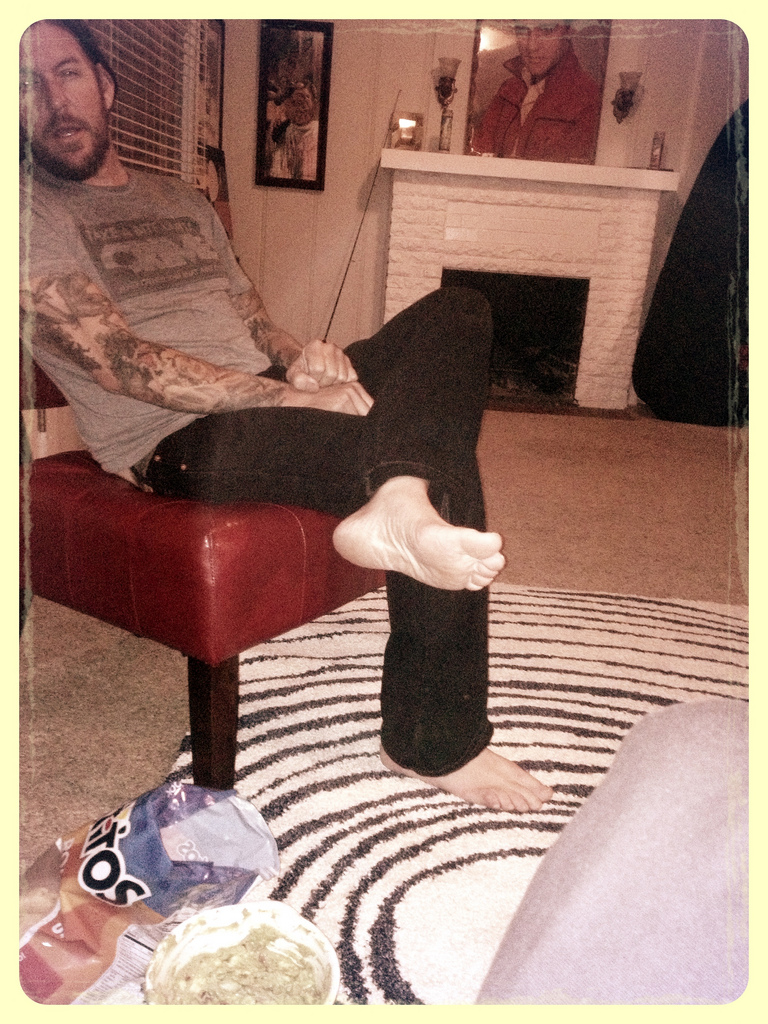 With that we continued with our jibber jabber and self flagellation until we could no longer.

The following day found us both furiously fighting against the bottle flu while assembling the band’s equipment, procuring a rental van for the night and ultimately getting to the venue for load in. For a brief spell I spent the day sleeping it off in a warehouse in Signal Hill, California when I was suddenly prompted to pay a visit to the neighbor; 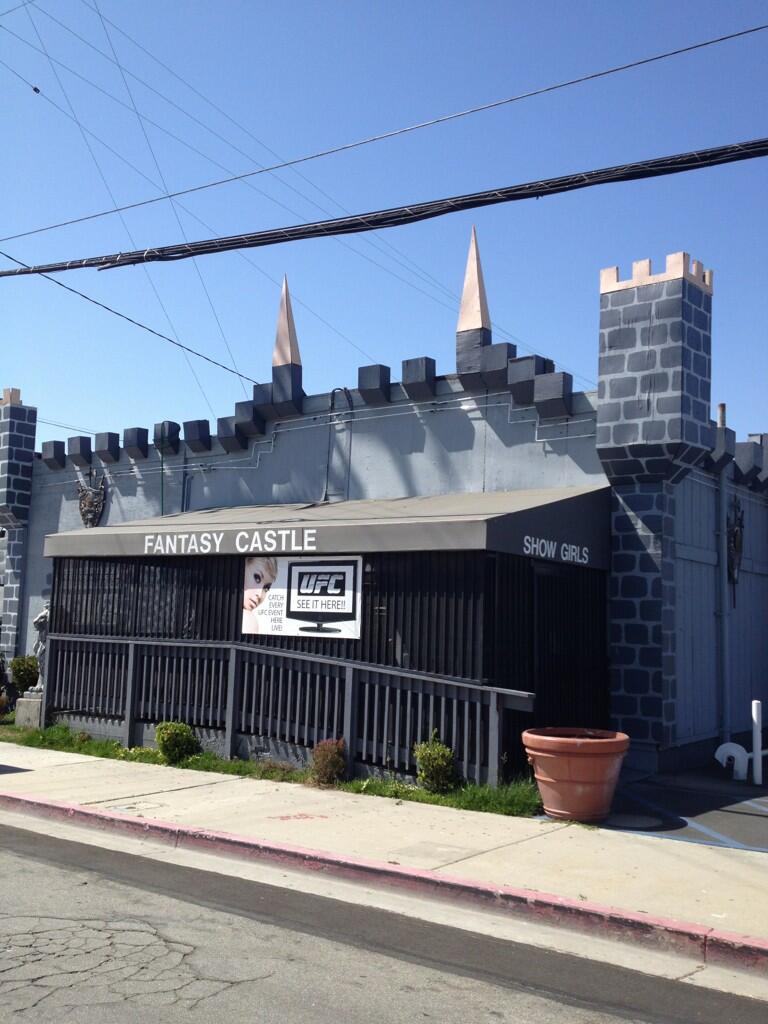 Now mind you, while the building does resemble a castle, unless your fantasies involve train wrecks of ladydom immediately and aggressively hustling you for whatever shrapnel you have in your pockets while simultaneously melting your face with hot butt breath, then I’d say the business name is a bit of a misnomer.

Luckily for my nostrils, the time had come to adjourn to the venue to load in and watch Zeke engage in an ear splitting sound check; 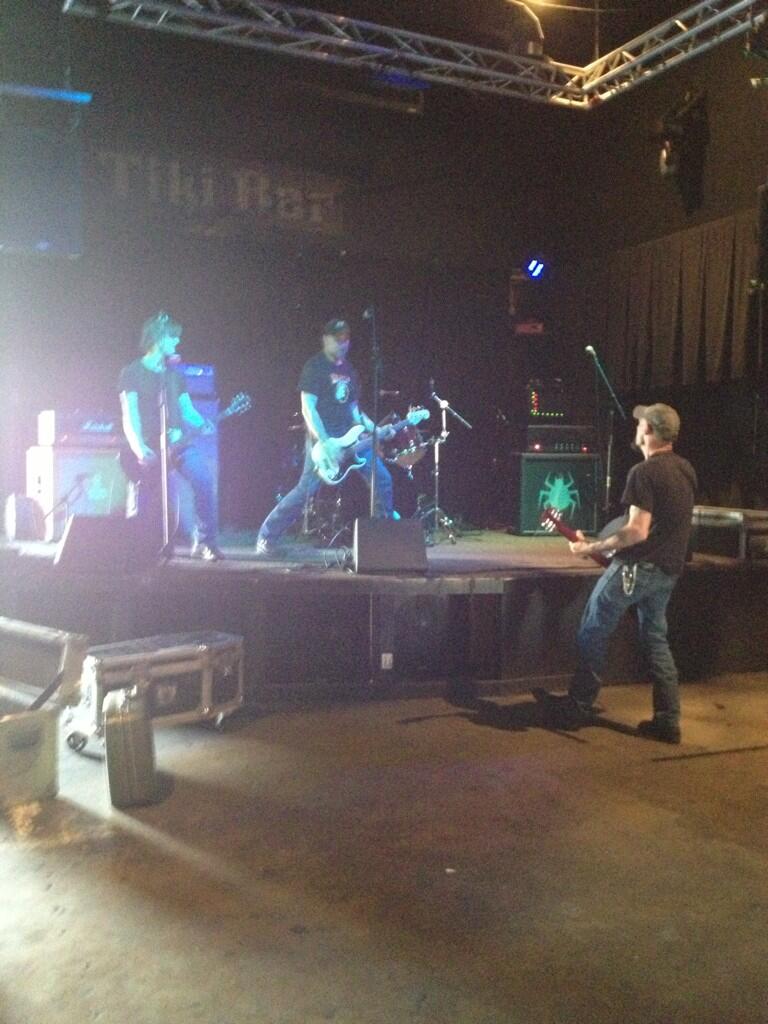 (Crappy spy-pic from my camera phone because I was afraid if they saw me taking pictures, they’d drop everything and beat me up on the spot.)

After another several rounds of drinks, we headed out and I parted ways with Bill to meet up with my old friend and artist extraordinaire Kristen Ferrell, pictured here with my new best friend in the whole world, Monkey; 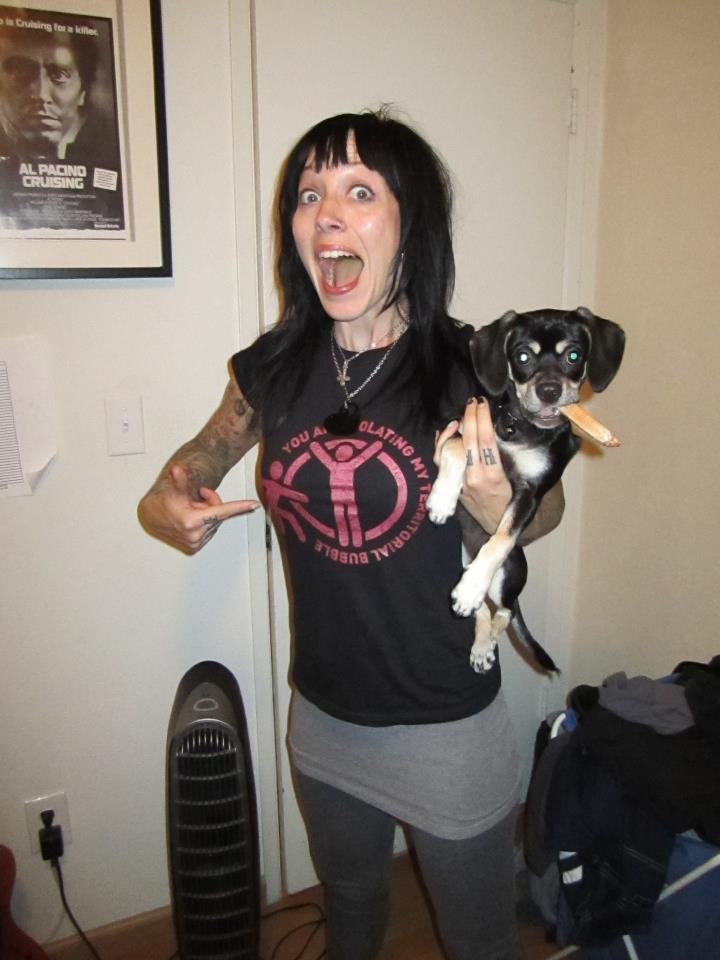 We spent some time catching up, eating delicious Mexican food and then headed with haste to the club where the opening acts were already under way.

Kristen described the crowd brilliantly when she said it was as if God herself reached down from Heaven and scooped up with her mighty hand a huge cross section of humanity and dropped them all into the room at the same time. Punkers, skinheads, beach trash, random bar flys, Barbie dolls, ex-cons and hessians all rubbing elbows with one another and drinking in the noise with a fury.

Finally O ZORN! took the stage and their turn at blowing what little of the roof was left intact, off; 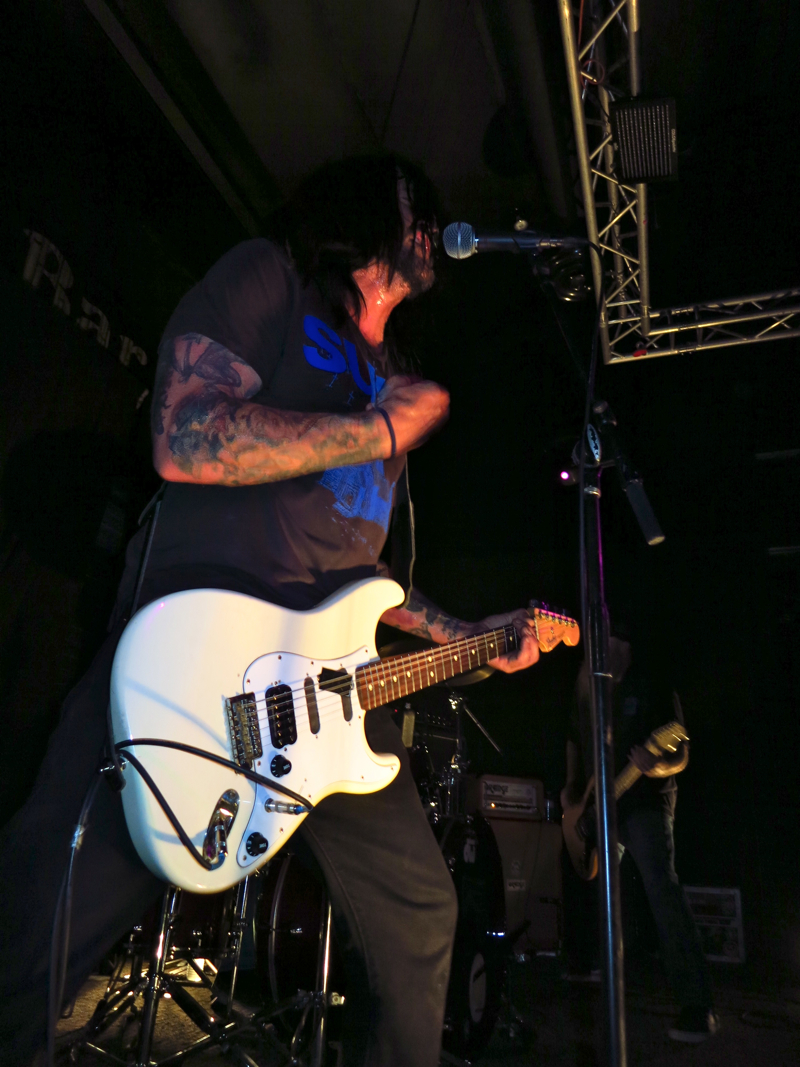 Again, for those who were at my last fall’s Underbike Industry Mixer®, you possibly remember the damaged ear drums that were a result of O ZORN!’s musical stylings, and it was clear by this most recent performance that they have been steadily crafting their sound in the days since. Though they don’t have any immediate plans for a nation wide tour, if you happen to be in Southern California, they will be opening up For Black Flag on July 12th at Santa Ana’s Observatory. For the rest of yinz, you can download their freshly remixed songs in anticipation for eventually seeing them here.

Once Zeke took the stage, everyone in the club was channeling my previous evening, and getting drunker by the second.

Considering an average Zeke song is around a minute and a half long, their hour plus long set included nearly every song in their catalog, and they pulled no punches with everyone’s favorites, including one of my own, ‘Fuck All Night’;

Finally, at the set’s conclusion, the teaming, sweaty and stumbling masses made their way into the cool night air and I adjourned to the men’s room to relieve myself when I was suddenly flanked by two people, one barfing into the urinal and one into the toilet.

It was a fine way to wrap up a night of blistering rock music and bleeding ears.

And finally, on my last day in town I met back up with Bill, O Zorn’s drummer Dan, his lovely and talented wife Vickie; Kevin and Jessica where we embarked on a final day of beers, wound licking, music, conversation, hijinx; 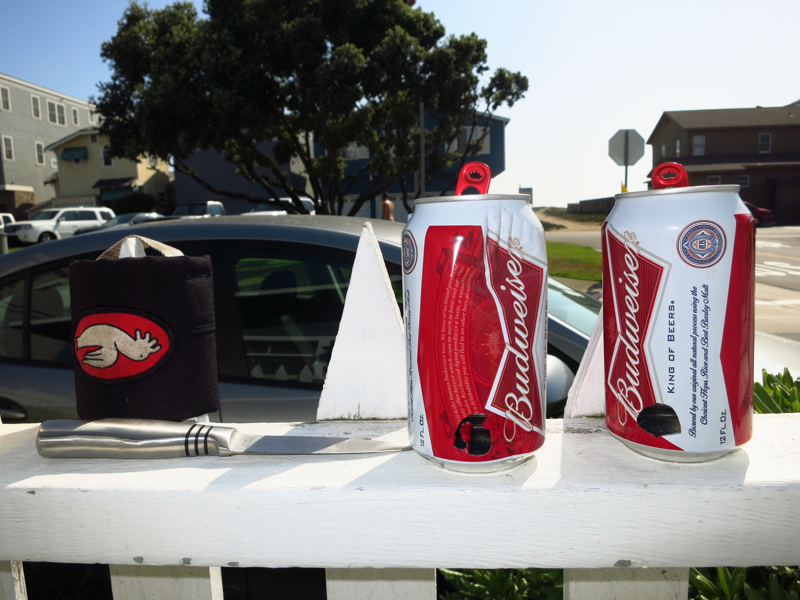 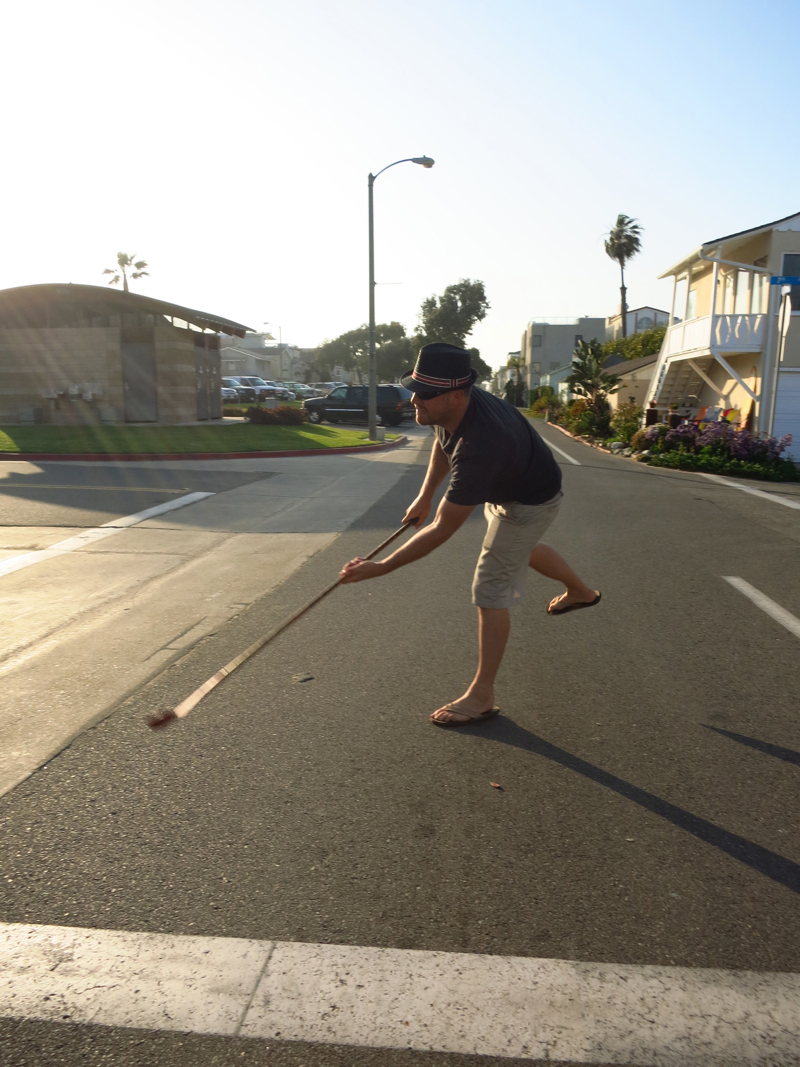 Concluding it all with some street bocce ball alongside of these two randoms; 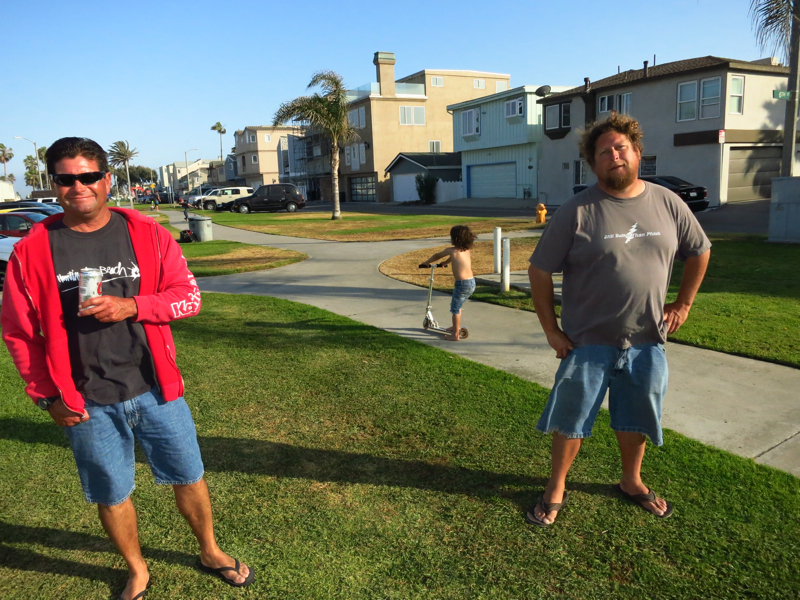 Upon night fall, we made our way to dinner where we broke bread and took our final bite out of Sunset Beach’s bourbon supply.

And that, in an efficiently split nutshell, and as close as I can recall, is how I spent my rock and roll vacation.

Remember, I work hard so you don’t have to.

I might never break promises, but if it’s for the betterment of the site, breaking my liver is another story altogether.

15 Responses to “Because I only sometimes break a promise.”