Because that’s why you come here, right? Right out of the gate today I’m going to touch on the subject of Dirt Rag Magazine, specifically the July issue featuring the esteemed Missy Giove on the cover; 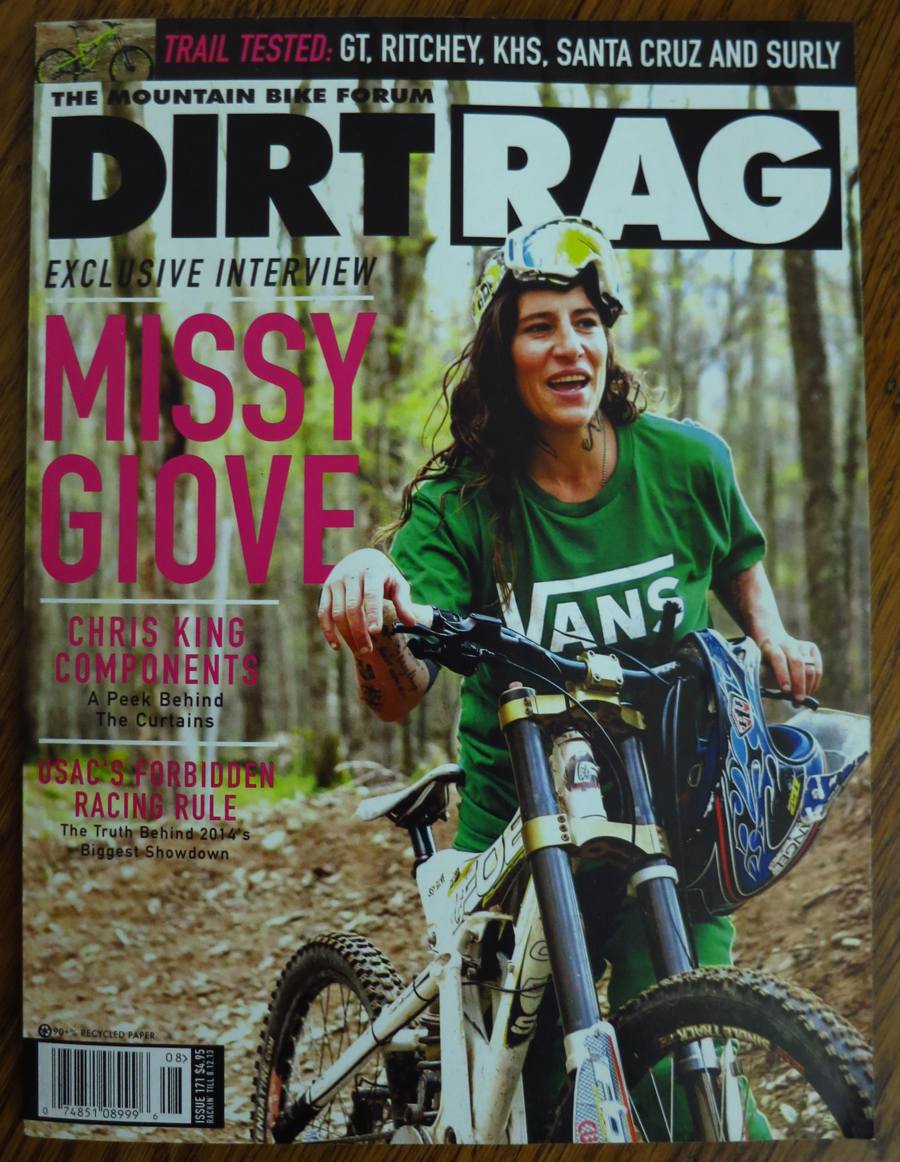 I picked this up at a local news stand the other day because at first glance, it was jam packed with an array of good stuff. Primarily however, I was genuinely intrigued by what Missy had been up to since getting jammed up by Johnny Law a few years ago. Interviewer Anna Schwinn of Maximo Supremo residents All City Bikes did a Brilliant (capital B) job with her task, and I was left feeling quite satisfied with my purchase.

Mind you, I’m typically not the sort to write letters to editor for a job well done, nor was I particularly inspired to do so in this instance, until I came across the following; 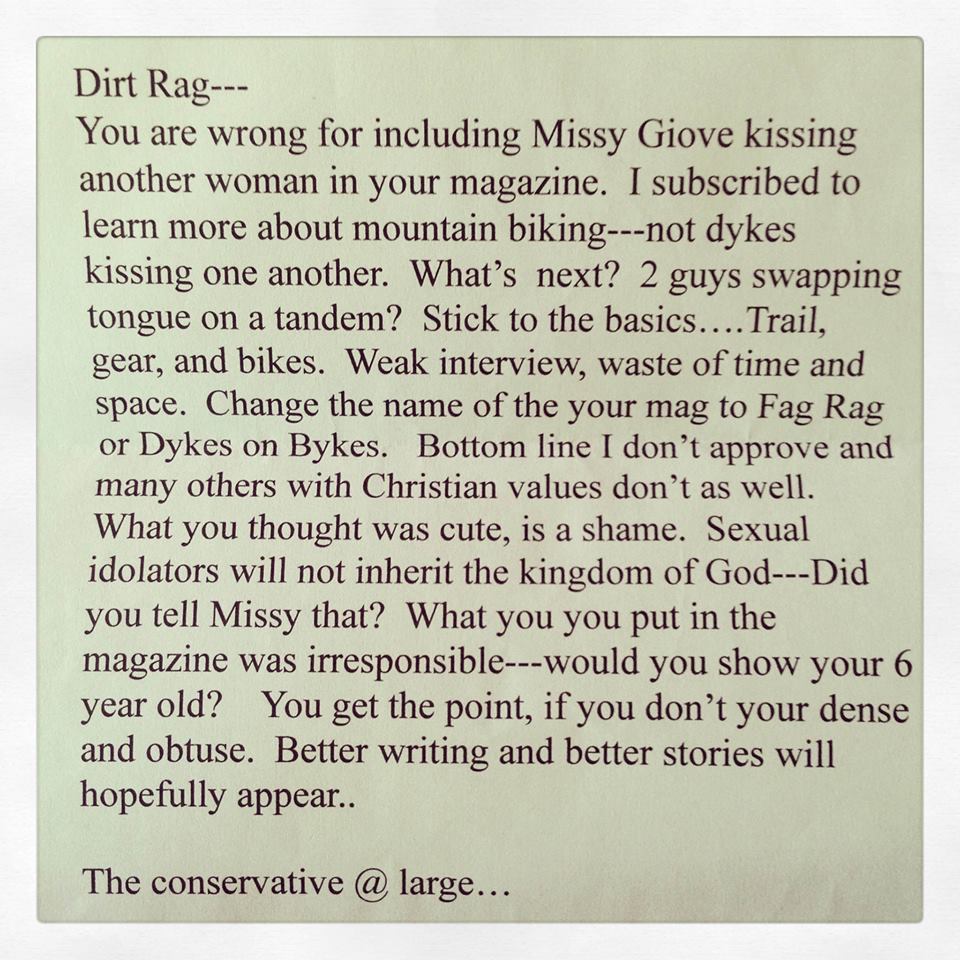 At that moment I penned a short draft thanking them for their efforts on shining a much deserved spotlight on Missy, but what I really wanted to do was to write an even shorter note to The Conservative @ Large which would have gone something like this;

Are you a parent of a six year old? I assume by the specifics of that query that you are. What ever would you say to them in regard to the image? For starters you might try- “in twelve more years you will be a legal adult. I would suggest at that time you move out and get as far away from me as possible.”

Somewhere in there I might also include a directive for them to eat a bowl of dick.

Anyhoo, for the love of the little baby Jesus, I encourage you to pick up a copy and see for yourself.

Perhaps while you’re making the purchase you can grab the new ‘Fag Rag’ and ‘Dykes On Bikes’ as well.

In other news of tremendous individuals who ride the mountainstyledbikecycles very well, you may have heard that last week a whole lotta bad befell Kona Bikes’ own super honch, Matt Slaven; 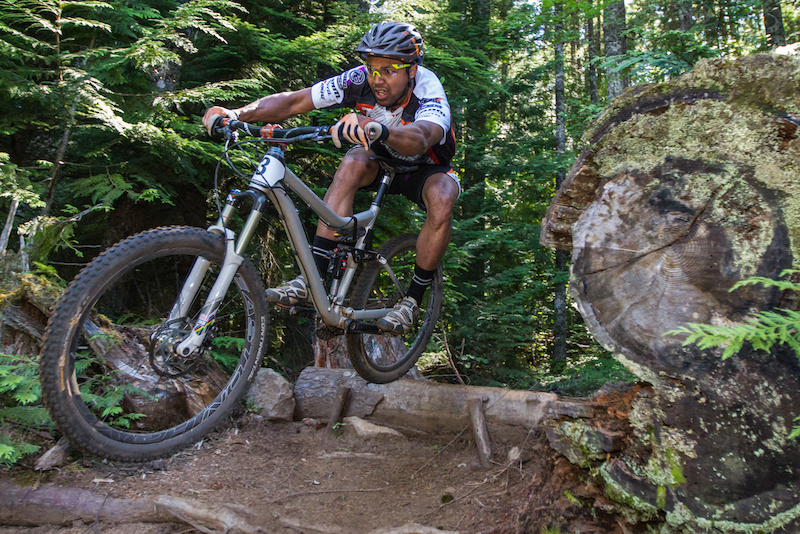 As the story goes, he was in Santa Cruz for a Bell/Easton sales meeting and while walking through a city park enroute to food stuff with two friends, was accosted by a masked gunmen, and shot in the process.

Fortunately for our hero, he sustained non-life threatening injuries, but the occurrence is still deeply upsetting.

I know the park where the group was attacked well, and is a place I have a great distrust of. Matt is a stellar individual and I hate that this happened. It’s my sincere hope that he continues to mend and will be back to fighting form in no time.

In even more bikecycling news, the hilaritors at Bike Monkey have just issued the following video in conjunction with next month’s Annadel event;

I’ve ridden there, I’ve raced there, why, I’ve even raced while constructing a wizard staff there. This ho-down is certainly not one to be missed.

Now as we near the end of today’s effort, I’ll get into that other 20%.

First of all, after mentioning the Rapeman and Fugazi Sub Pop Singles Club 7″ records on Monday, what should the cosmos see fit to place in my grubby hands but those exact two releases; 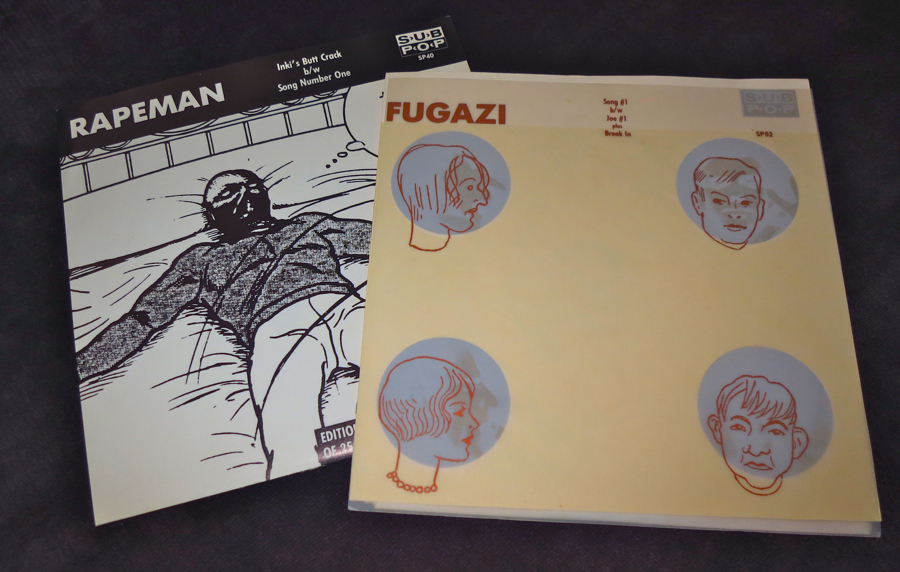 After procuring them, my meager savings are even more so, but they helped to part the clouds and make my house a whole lot louder.

At least for the length of five songs.

Secondly and lastly, my pal, and fancy (no) pants model Jesse Lee sent me a text yesterday morning which caused my jaw to drop, and all of the scrambled eggs that were contained therein to fall on the floor.

All hail Chase No Face; While Chase’s saga might only comprise 10% of the 20 that is today’s non-bike related hodgepodge, she and her family are most definitely 100% of what is right with the world.