Now, so as not to wear my typing finger out with today’s effort, I will pass the proverbial mic to Gypsy The Punk. You see, after I finally declared who the entertainment was set to be at this year’s Underbike Industry Mixer®, he told me that he had a saga regarding the band. Little did I know that it had all the makings for a country music tear jerker.

It’s a long one, but is well worth the effort if you have an affinity for literary roller coasters of emotion;

“So here is the thing about The Black Jetts. I am pretty sure I saw them is 2006… I can not 100% confirm this, and if you read the rest of this story you will understand why.

To start things off with, my wife had just stolen my dog. And run off to Vegas to start a new life.

I was pretty upset about losing that dog.

So, I grabbed a buddy, and we high-tailed it across the desert to hunt her down. We got there at about 10pm, and I managed to get her on the phone. A combination of blackmail, bribery and begging convinced her to meet me the following day at the 7-11 at the far south end of the strip.

We were way too cheap to get a hotel room so we did what any two single, dogless men would do when faced with a free night in Vegas. We went to a bar.

I go through four distinct stages of drunkeness. Stage one? I get loud. Like super-duper loud. I talk loud. I sing loud. I laugh louder. Apparently the bartender got tired of it, because she kicked us out. We took a cab to another bar.

The second bar was dead, but the beer came with a mandatory side of whiskey, so I quickly reached stage 2. Stage 2 is usually my favorite.

This is the part of the night where I start hugging strangers. Stage 2 tends to bring out the best in people. They seem to respond well to random, no-creepiness-intended, affection, and they end up buying me drinks…

Which brings us to stage 3.

My buddy puked. We got kicked out of the cab.

Fortunately, we got kicked out right in front of a 24 hour pawn shop. In the window of this pawn shop? An old-ish black on black Haro BMX bike with no brakes. The guy inside wanted $75 for it, but I talked him down and ended up getting the bike and a green felt sombrero for $65.

And away we went.

My buddy stood on the front pegs (facing backwards because facing forward on the rear pegs made him want to hurl again), and I pedaled my ass off while wearing the sombrero. We followed our ears, and eventually wound up at what I think was a Black Jetts show.

Why do I think that? Because the next morning, when I woke up in someone else’s hotel room at Caesar’s Palace (stage 4 is when I get sleepy and start looking for somewhere, anywhere, to crash), I had a very boot-leggy looking Black Jetts CD in my jacket pocket.

The CD is actually one of the things that woke me up. It was poking me in the ribs something fierce. The other thing that woke me up was the
mostly naked man standing above me wearing nothing but a towel around his waist. He was nudging me in the CD with his naked hairy toe, and saying, “Dude… How the fuck did you get in here? You gotta go, man.”

So I did what any guy would do… I screamed a little.

Then I found my friend (on the floor next to the mini bar), my shoes (in the bathroom behind the toilet) and I got the hell out.

The good news? None of my orifices were any sorer than usual. The bad news? I was going to be late picking up the dog. It was going to take a miracle to get me to my truck and then to the 7-11 in time to meet my soon to be ex-wife. My buddy and I staggered out of Caesar’s and into the sun. The line for a taxi was a mile long. I was screwed.

Just when I thought all hope was lost, the world’s greatest valet (WGV) came running up with my Haro.

“Dude! Where?” Wha-huh?” was all I could manage to squeak out.

Apparently, my buddy and I had left the bike with WGV, and not knowing what to do with it, he had just stashed it behind the bushes next to the valet stand. He was just about to go off shift too. If we had been even 15 minutes later, we would have never seen the bike again.

“Any chance I left a green sombrero with you too?”

I gave him my last $20 and my buddy and I rode like hell to my truck, and then drove like hell to the 7-11. We got there right as my soon to be ex was starting to drive away. I flagged her down, got my dog, and drove back home with the windows down and The Black Jetts CD turned up on the stereo.

PS- After reading Wednesday’s post, I looked like hell for that CD and can’t find it anywhere… I do still have the Haro though.”

So you see? We have a legacy to uphold, and I for one am proud to be a part of doing so.

In other news from the whirld, via Thom, I came across this; I absolutely, and whole-heartedly agree.

As a matter of fact, on a number of occasions, I’ve put a ride on hold in order to pile branches across just such an atrocity, only to return a few days later to find that someone had removed them.

Why people are so determined to turn a sublime little ribbon of singletrack into a web of eroded shortcuts, I suppose I’ll never understand.

And while we’re on the topic of keeping trails happy that in turn do the same for us, a couple of weeks ago, Chaz DiStrapiano sent me the following photo; I replied to him that I was pretty sure those were supposed to be littered all over the side of the trail.

He then responded thusly;

“I counted 32 bags trailside last time I rode in (Portland’s) Forest Park. You know, where there’s only 0.25 miles of legal singletrack so as to protect nature.”

Portland. Where the level of self entitlement is only rivaled by that of Marin.

Remember various chambers of commerce across these great United States, I’m always happy to help with your town’s slogans, should you like an assist.

In other news out of Minneapolis West, Ian sent me photographic proof that while calling roundabouts ‘roundabouts‘ in Europe might be all well and good, in America they should be called ‘circles of utter confusion‘ 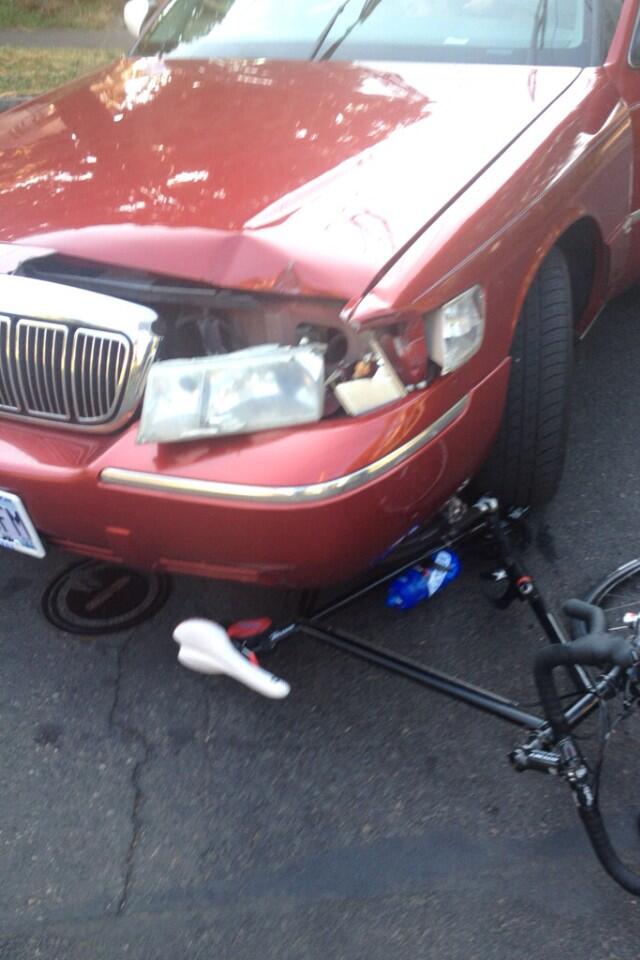 And for those concerned, Ian is just fine, the driver got a lesson in proper driving etiquette and the world will keep spinning.

Just probably not for the back half of Ian’s bike, or the car’s hood and headlight which went toe to toe with his ass.

On that note, it’s time to pack my bags and make my way to my beloved Colorado and the fancy pants Pro Challenge.

Should anyone have an interest in saying hello, keep your eyes peeled for the New Belgium Mystery Machine; 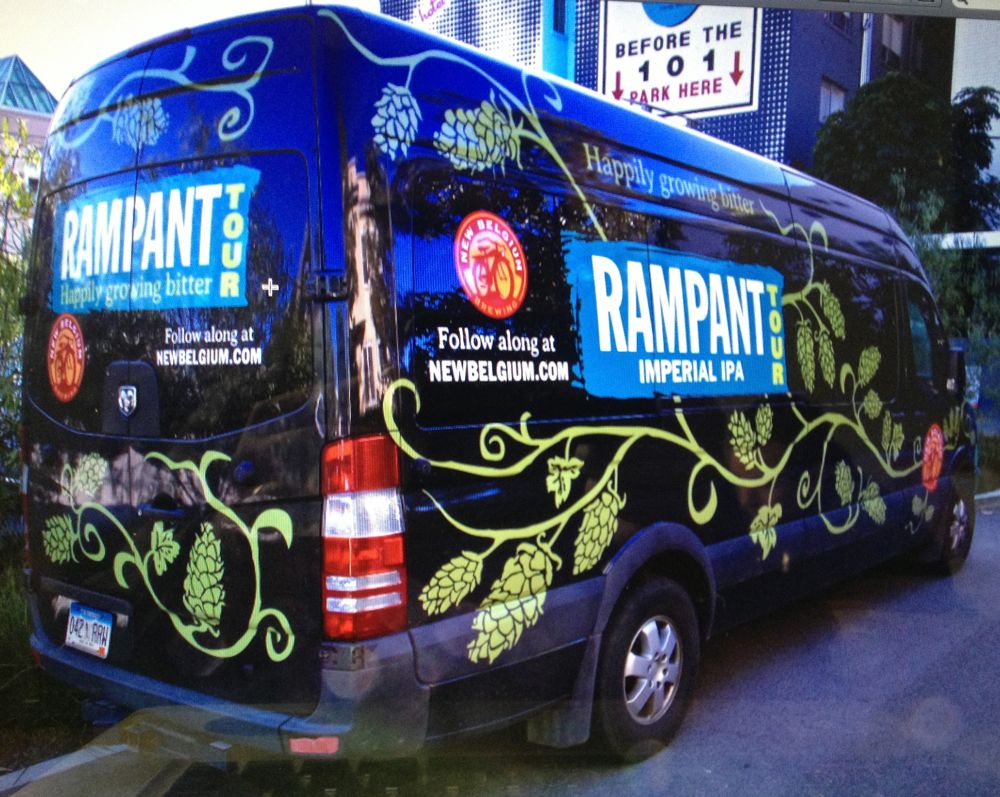 Or as I have affectionately dubbed it, The Murder Van. 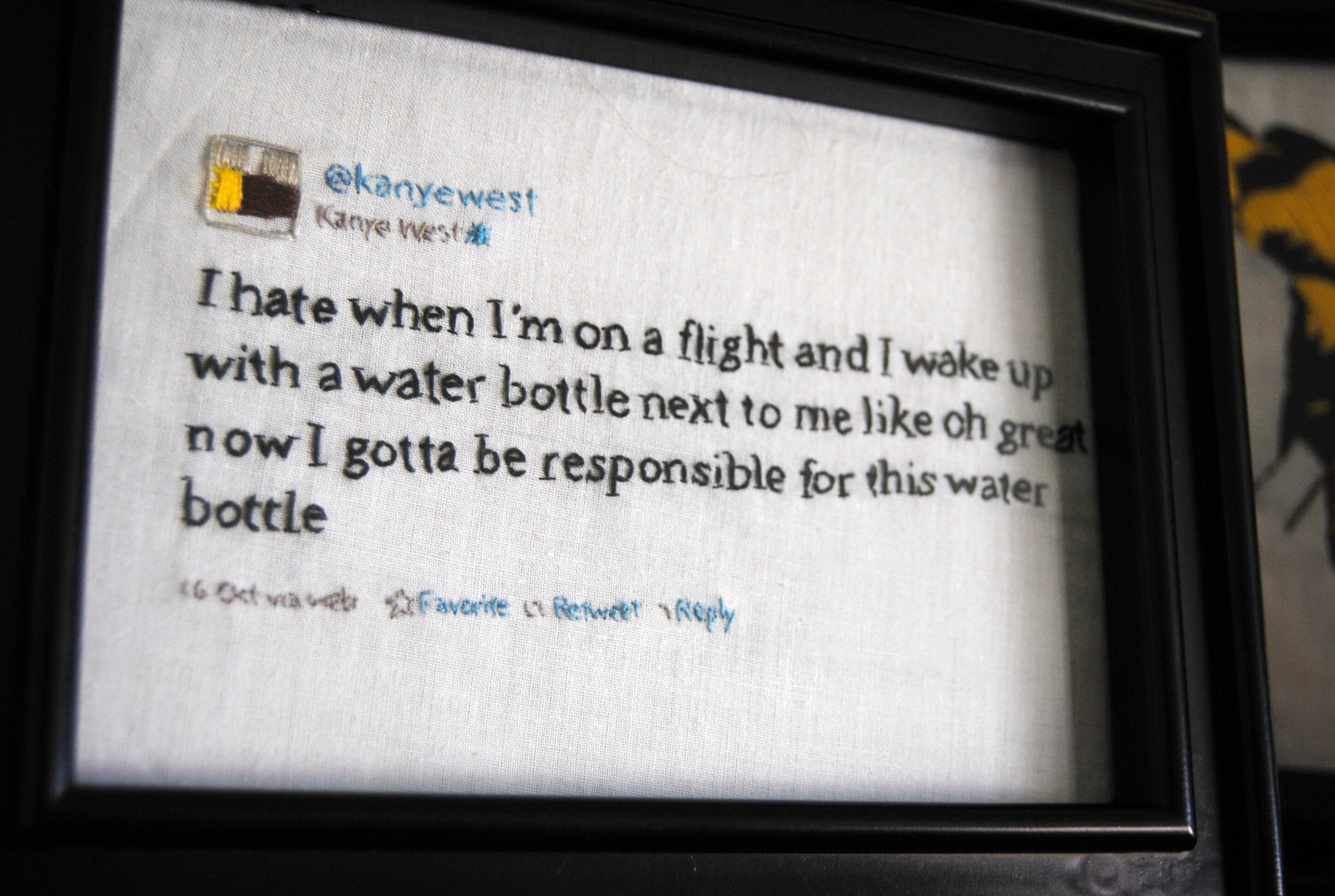 Arm in arm we will be skanking, drawing, drinking, and drafting a New World Order™ as we spread the word of Dog or whatever New Belgium asks us to.

Now that I have a mobile computifacation device, nearly all of the highs and lows will be available for consumption here on my regular Monday, Wednesday and Friday posting schedule.

So it’s with that, I’m off with two fingers raised to the sky in defiance.

Which two is naturally open to interpretation.

6 Responses to “One last post before I take my typing finger on the road.”