For those of you who made the connection between today’s post title and that image, congratulations.

And for those of you who can put your finger on just why what’s going on here is pretty sweet; -You’ve clearly been around the block, and if I could give you a star in a goldish color, I would.

On Monday I broached the subject of what can be found on Al Gore’s internet, and some of the things that had recently crossed my plate.

None of which is the constant deluge of people’s photos of themselves playing bikelocross racer over the weekend. I can go the rest of my life without seeing those anymore, but unfortunately I know that’s probably not going to be the case.

Those aside, my recent sashay around the web was a fun jaunt, and if you read the bit about the deep web, one that ultimately took a rather horrifying turn.

In much lighter news, it was just yesterday that I came across the following story of a young man finding a dead mouse in his can of carbonated poison. 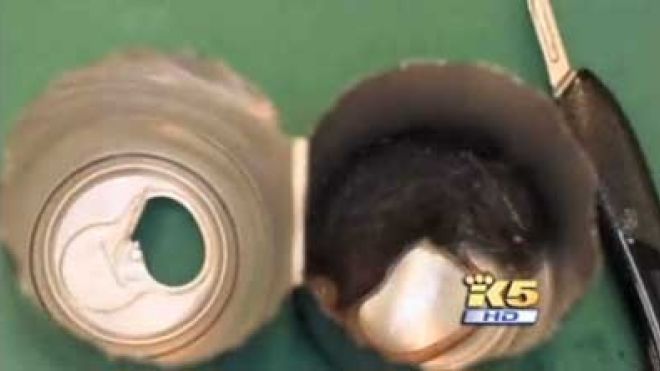 I have it on good authority that the athletes who are sponsored by Monster get cases of canned water dressed up to look like the bubbly toxicity. That’s right- The people sponsored by the company won’t even drink the heinousness.

But relating to the previous news blurb, chances are good that the mouse was probably the healthiest ingredient contained within Mr. Sulzchik’s purchase.

Not relating to dead mice or marketing liver failure to the world’s youth, HJT responded to my recent procurement of them fancy pants camouflaged Giro shoes; One hour of craft time can ensure that everyone’s feet look like those of elite level bike blogger douchebags (same dif).

Of course while we’re on the topic of elite level bike blogger douchebags (same dif), I sent myself an email about an upcoming celebration of a bygone era and riding bikes with the equivalent of a box of tampons stuck to our heads; I have a vague notion of where the ride will take us, and I look forward to maybe even attending it as well.

It’s probably going to be fun, but nowhere near the level of adventure contained in the following email I received from Lucas;

I’m writing to let you know about the release of the third issue of Bunyan Velo, a quarterly collection of photographs, essays, and stories celebrating the simple pleasures of traveling by bicycle. It’s available online, completely free, at www(dot)bunyanvelo(dot)com.

I’d appreciate any help in spreading the word, thanks!

Man, that there link is so packed full of amazing stories and photos that my little pea brain exploded in an audible ‘snap’; Do yourself a favor and spend some time with the Velo Bunyan. It is more than worth the time.

From Chip of Velo CB and Hup United, I got a highlight reel from this past weekend’s PVDCX, which I think stands for ‘Profound Venerial Disease Carrying Xenophobes’ or something.

It’s just hit me while watching the following linked video. I am the Michael J Fox of the #NECX, without the Parkinsons but hopped up on beer, bourbon and caffeine. Or as they call it in Philly “special”

No one died, was beaten up or arrested. Everyone played nice. Hopefully the Boston kids play nice in Philly in 2 months. I am sure they will…..luckily we let the overpaid Canadians duke it out on the ice while we share the love and bourbon on the cross course…”

At three minutes and thirty seconds into that clip, did someone just off screen actually say “Can I give you a heads up? That I’m gonna- I need to go over and talk to the chief ref and let them know that you’re doing beer hand ups…. (Something, something, something unintelligible).”

You know, a totally acceptable way around the tattletale crybaby’s rules is to partake in the activities pioneered by Captain Dave of Evil Cycling, and first implemented by yours truly way back in 2009, ‘The Beer Hand Down®‘; 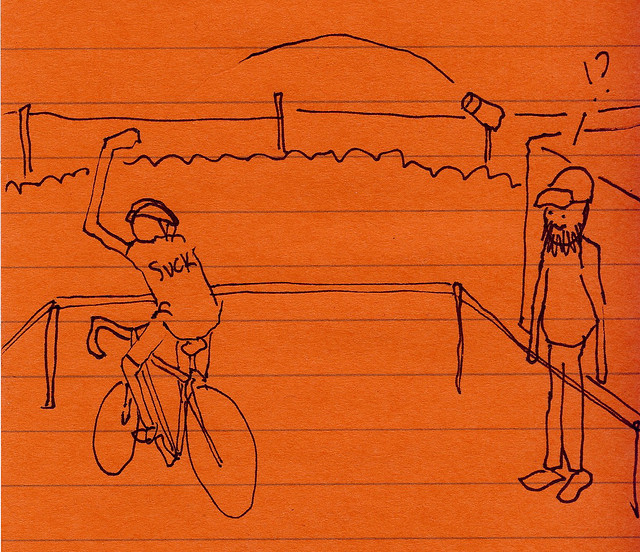 While it perhaps hasn’t revolutionized the sport as I’d initially predicted, it has found a loophole in the stupid rule book and when it comes to bucking the system, as long as at least one person’s done it, I’d happily call it a win.

Certainly a group who knows about winning is Sacramento’s own Gheto CX, the impresario of which is Marty, pictured here documentating, and saving the day a couple weeks ago with a basket full of iced beer and his offspring in tow; It seems as though between puppet mastering the regions finest dirtbags, he’s found time to ensure that Zed Stays Dead; I would guess based on the given evidence, that perhaps the good times are actually still present, and have found a home smack dab in the heart of the Golden Sate’s capital.

10 Responses to “Where have all the good times gone?”