Kicking things off- For those who recall Transworld Skateboarding’s ‘Wrench Pilot’ strip, in which everything in Mel Bend’s fantasy world was a landscape of skateable perfection; -I would imagine that you, like me see an uncanny similarity to the following image I found of the bike park in Zürich shot by Velo Solutions; 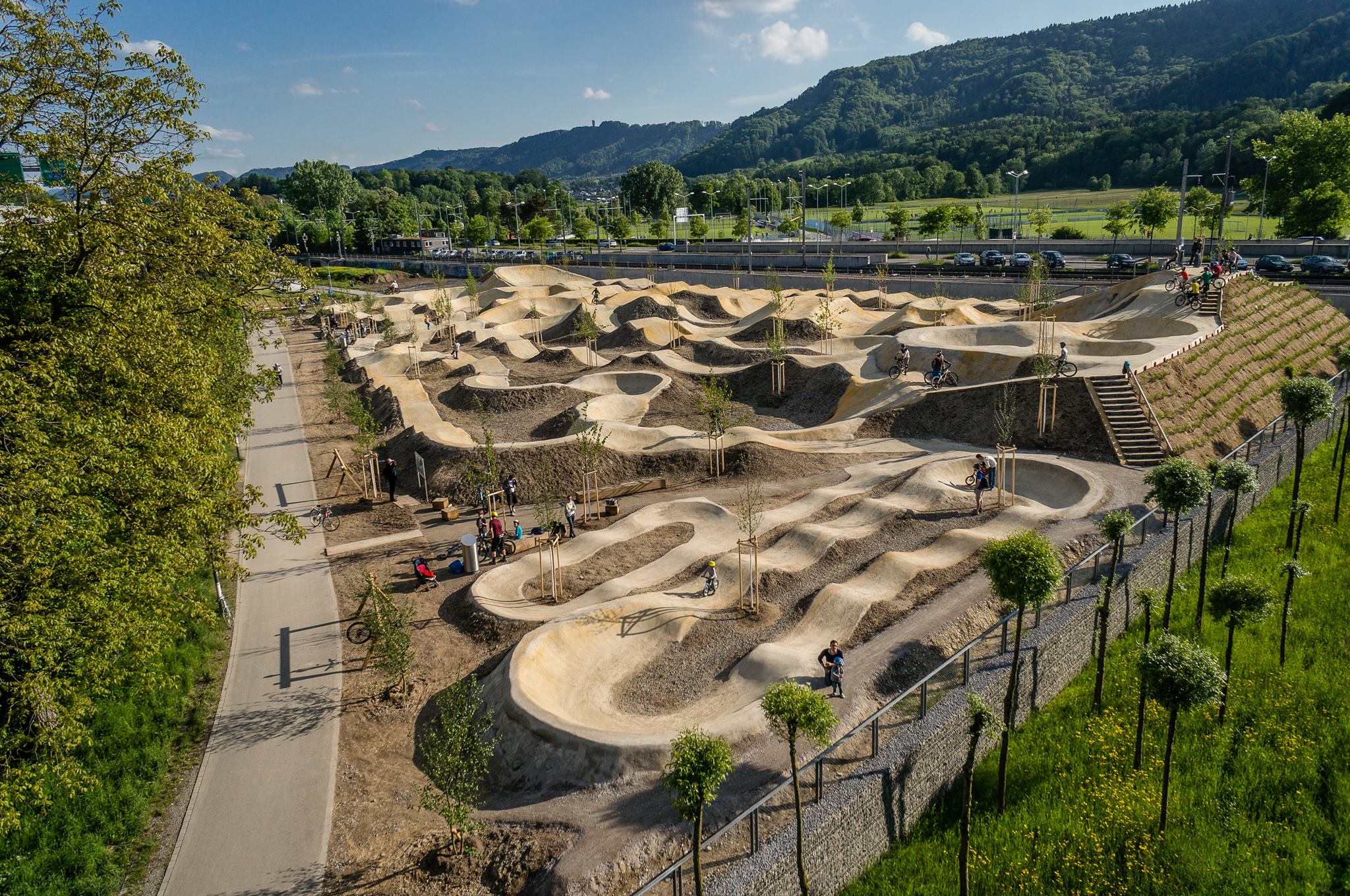 It’s like a race of aliens with a penchant for fun came to earth and assembled their own party zone.

Hey now- How about we get into little bit of art that doesn’t suck? Today’s offering will be a bit of a break from the norm and tends to flirt with a more classical styling. They are the paintings and sculptures of one Nicola Samorì; The creative process is a curious thing indeed, for when I first stumbled upon Samorì’s work, I felt as if I found a perfect painter who engages in the exact visual dialog I wish I could.

This is the thing that has always driven me crazy about visual art and my own participation in it. While I’m content enough with my own work, when I see someone like Nicola (who on top of everything, is roughly my same age), I feel as though I’m completely wasting my time. What he does is so next level, it makes what I do look like scribble time at day care.

I wonder the same thing about musicians. Pick a band or a singer/songwriter. For the sake of argument and since this is my pulpit, I’ll pick Fugazi, because through the entirety of their career, they were ever evolving, and consistently releasing inspired and creatively relevant music; 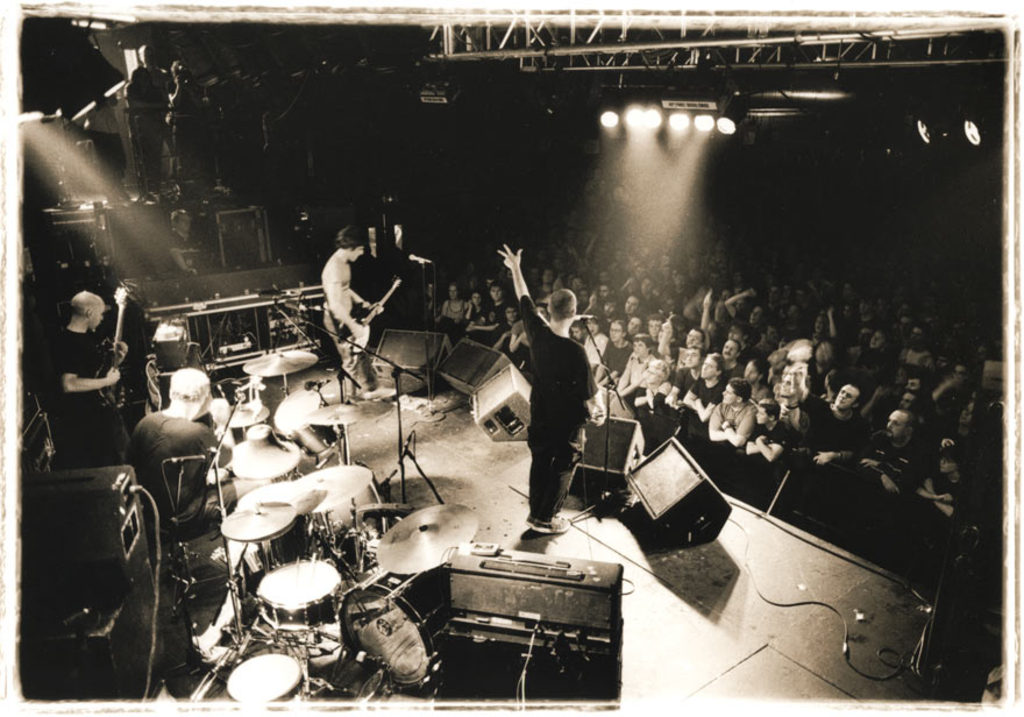 Would those guys go home and listen to their own records and feel truly appreciative of them? Can Nick Cave or P.J. Harvey listen to their catalogs with a disconnect and genuinely enjoy the music, or are they looking at other people’s efforts with a tinge of envy and despondence for their own?

Naturally, there’s always going to be somebody faster/tougher/richer/better looking, etc. but those things (except for the ‘better looking’ one) are generally quantifiable. This thing of which I speak is very personal. I wonder if perhaps Nicola looks at his own work and wishes it was more like someone else’s, or sees qualities and subtleties in other paintings he desperately wishes he could apply to his own.

But more so, does everyone who makes stuff- be it writing, or music, or visual art, generally have these same feelings?

It’s strange that it’s taken me this long to finally pose the question, and now that I have, it’s in the sterile and rather impersonal forum of the internet.

Now that I’ve bared my soul, we can get back to business. Namely, with the following video that Sally sent me, which depicts nature in it’s most elemental, yet graceful form;

Finally, it occurs to me that the only reason anyone comes here is to read all about hot bike on bike action because we’re bicyclists whose focus is not on art (unless it’s bike art) or deer farts (unless they’re bike deer farts). So let us get down to business with a small recap of this season’s first Meet Your Maker rides.

For those not in the know, the MYM rides are bicycle adventures of every discipline, each hosted and organized by a different regional manufacturer. While the NAHBBS is a quality venue in which to meet the builders, other custom bike enthusiasts and ooh and ash over the bikes, the inspiration here is to put your money where your mouth is and actually ride them.

And at the first sponsored by Paragon Machine Works, that’s what we did. Naturally I arrived late and not only missed out on donuts but had to reclaim a coffee cup from the garbage to get my joe. Then Sean from Soulcraft and I pulled up the rear as 150 or so bicycle riders made their way along the Western most edge of the East Bay en route to the newly opened bike lane on the eastern span of the Bay Bridge; 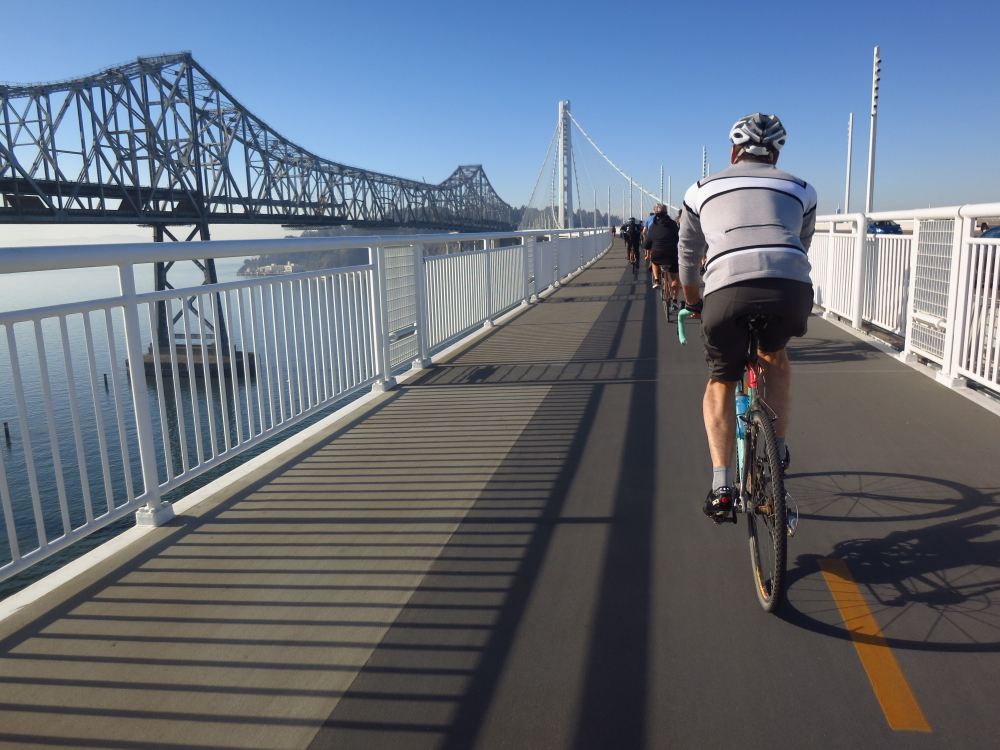 I was happy to ride across the bridge, even though it goes to nowhere and it will be another fifty to never years until there is a way to get into San Francisco aside from the Bay Area Rapid Transit train, a ferry or a car.

Of course by then, it will have collapsed because Caltrans built it with shitty Chinese steel.

Which sadly, is not an isolated incident.

Anyhoo, that unpleasantness aside, it was an unseasonably warm day to ride among friends and strangers, and once we arrived at the bridge’s dead end, we lurked and lingered; 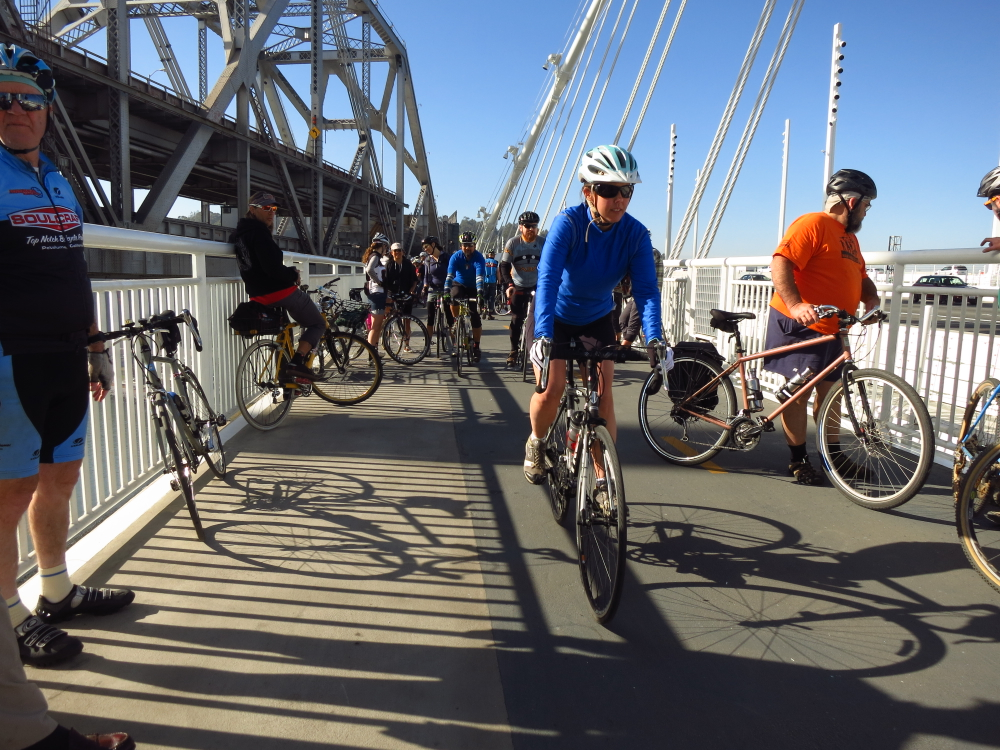 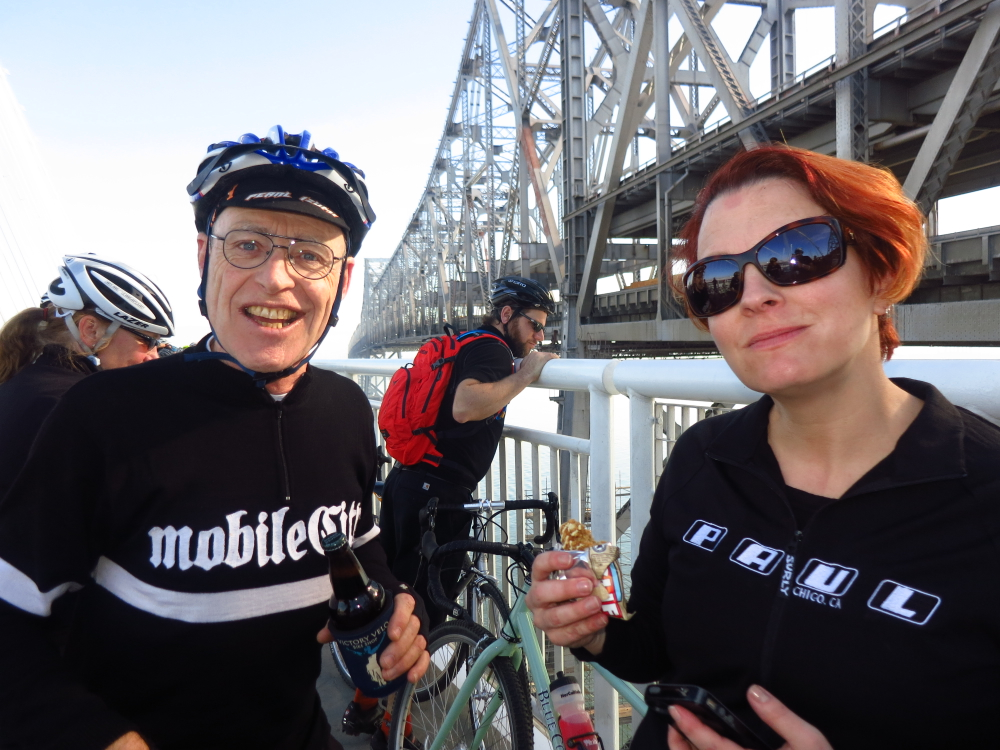 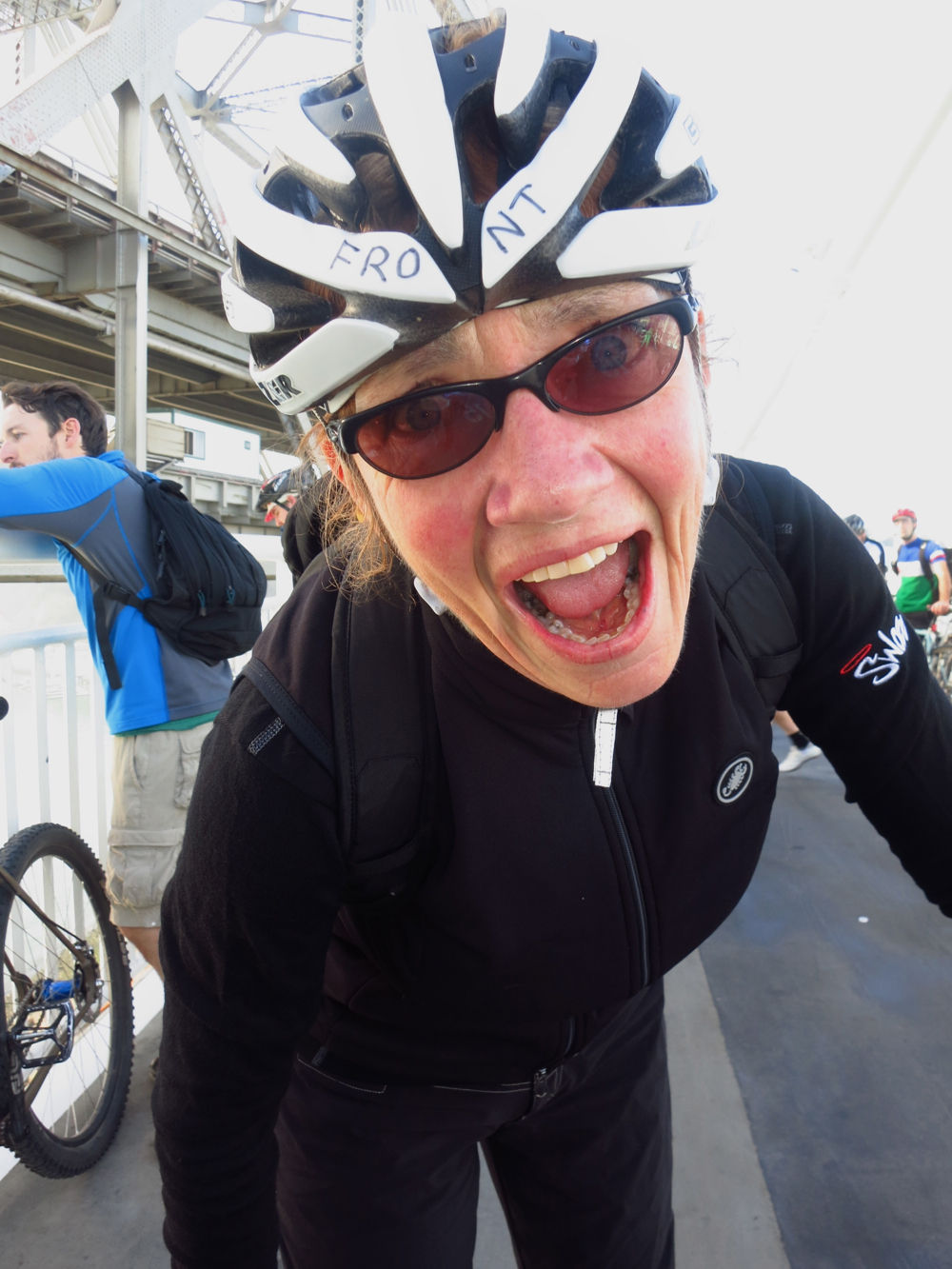 As we departed and made our way back down the span, I had to take my leave in order to go home and complete an illustration for what will eventually be a pretty awesome project that Raleigh Bicycles has got brewing.

Time will tell when the other shoe drops with that one, but holding up my end of the bargain was my priority so I pulled the ripcord. Fortunately, the other 149 people did not and based on this photo set shot by Pamela Palma, it would seem like it was a good thing they did.

Beer, bikes and a beautiful day. If I didn’t generally dislike everything so much, I’ll bet I would really like those things.

And so it goes- My bottom half walking in circles and my top half staying still.