Most folks who’ve spent any length of time here in the dank recesses of the AHTBM douchebag bike blog (same diff) know I’m nothing if not a master of half-assing everything, so it should come as no surprise when I mention that I’m bailing out of town tomorrow and as such, will have no post here for Friday.

The reasons behind my absence are two fold. One, because the floor beneath my office chair is overdue for a break, but the second, and possibly more important reason is this weekend in Ft. Collins, Colorado, there is this thing set to happen; It’s going to be a bikecycle related freakout, similar to this one we had last fall in Minneapolis.

Well, not The Homie Fall Fest part of it specifically, but the Folsom Fist Fight part of it. Or maybe both. I’m not really sure. What I do know is that Swobo requested my presence, and when my presence elsewhere is requested at the same moment my chair, and the floor beneath it both need a break, I answer the call.

So I thank you for your time and consideration on this matter, and if you find yourself jonesing for a Black Market fix, go to the archives.

Or just skip it and read a book. You’ll probably be better off for it anyhow.

So as we get into business, I’ll take a moment to make mention of this past weekend’s throw down in Spring Valley, Minnesota, called the Almanzo 100;

I should note that I’ve never done it before, nor probably will I ever, unless my contract with MTV sports to replace Dan Cortese comes through and they pay my airfare;

Anyhow, luckily I still have proverbial boots on the ground in the form of friends who either partake in the event, or like in The Banjo Brothers’ case, pull out all the stops to help make it 1000% more enjoyable for others who do;

I know you’re always asking, “Banjo Brothers,” what the hell have you guys been up to? (*Editor’s note- This is true. I do. A lot.)

Normally, we give you the very Minnesotan, “not much” (*Editor’s note- This is true. They do. A lot.) -but this weekend was different. We spent Saturday with Elvis, and 1400 of our closest friends at the crown jewel of FREE gravel adventure races, the Almanzo 100. Our “mirage” was a mile 78 oasis in the hamlet of Cherry Grove Township in southern Minnesota; Knowing this is the part of the race where folks need to get tough or die, we fueled ’em up with a strict diet of Oreos, Hamm’s and rot gut whiskey. After spending 36 hours ‘Riding with the King,” we’re hoping to formally introduce you two on your next trip to Portland East. It’s a match made in heaven. If you play your cards right I’m sure he’ll even throw down Devo’s cover of Pink Pussycat, complete with 3’ Barbie; Our weekend was made even more complete when we were named (hang on to your hat) “The Best Bike Gear” Company in the state by the geniuses at the Minneapolis Star-Tribune.

All the Best,
Banjo Mike and Banjo Eric”

I assume the sign says ‘St. Elvis’, but I prefer ‘Stelvis’ and it also warms my heart to know that he wears mandals.

In news of speed cycle racing, I recently caught wind of an interesting thread on the Twitter account of one Andy Jacques-Maynes regarding race runners;

I have a couple of thoughts about this, the first being that since I was a young fellow catching whatever blips and bits of Tour Day France footage I could get on Wide World Of Sports, I’d always enjoyed watching the crazed European fans sprinting along side their heroes. That said however, I doubt I would enjoy it myself, were I to be occupying the tap shoes of the cyclers in question.

The second is that I would be absolutely thrilled for Andy to stand on my desk and tell me what a fabulous job I do, and I’ll publicly declare this as an open invitation for him to do so.

Anyway, less often than I would expect (and occasionally hope), do runners get their just deserts; 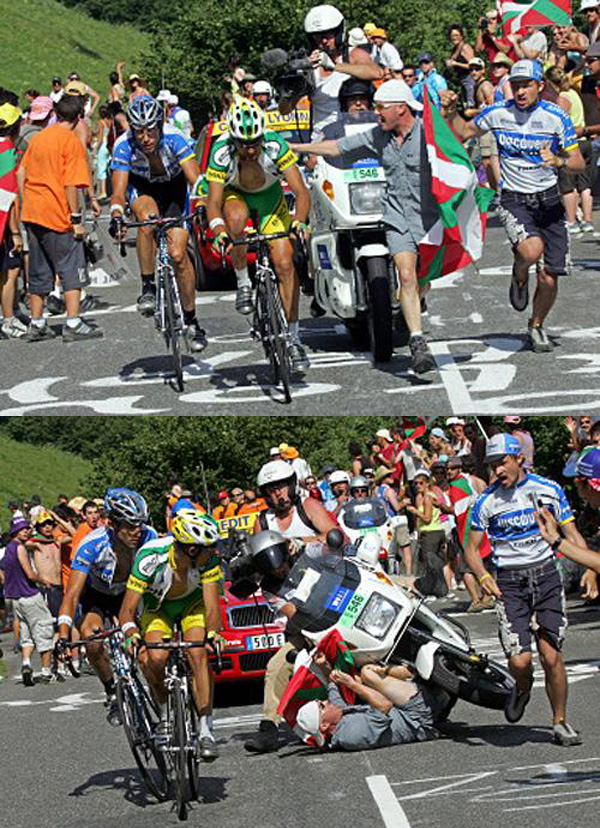 Whether it be by their own clumsiness as depicted above, or by the hand (or foot) of equally displeased fellow spectators;

Though I’d be lying if I said I didn’t do it once; 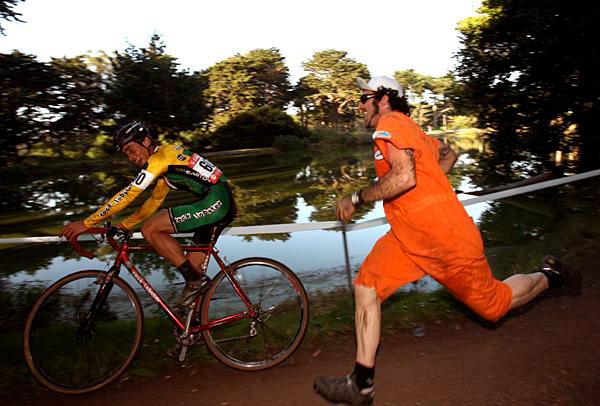 But it was with my friend Simon, and he owed me money.

Certainly within the realm of professional speed cyclering however, I’ll keep my tennis shoes firmly planted on the sidelines, clap appreciatively, and offer a calm and controlled “WOOHOO. YOU’RE RIDING YOUR BIKECYCLE IN AN EXEMPLARY FASHION.”

Finally, last week a fellow named Tyson from a company called Civilian emailed me and asked me to post a thing. I said I would, but didn’t.

But now I will;

I’m excited to announce the launch of a small batch of purpose-built, steel mountain bikes called the Captain Ludd. 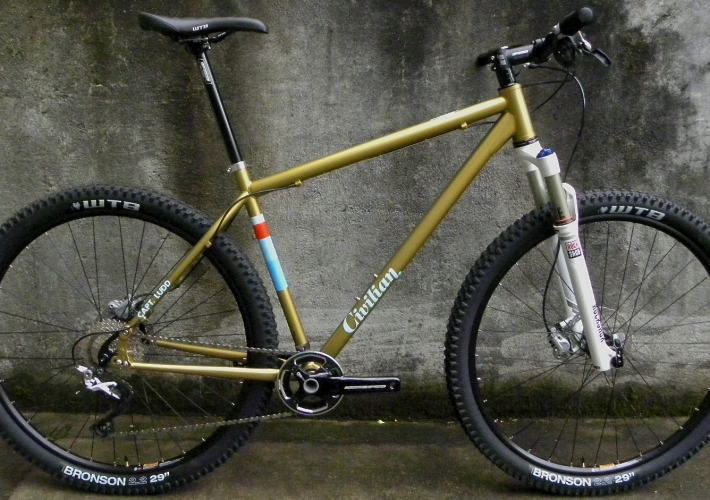 For more info please check out http://www.ridecvln.com/bike-types/mountain/ or email info(at)ridecvln(dot)com.

Thanks and have a great weekend!

That right there is indeed a fine looking bike, and though crowdsourcing tends to gives me the heebie-jeebies, I’m happy to give Mr. Hart whatever support I can.

Even though I said I’d do it a long time ago.

Because I dropped the ball.

See what I did there?

Though better that, than the baby.

7 Responses to “Dropping the ball.”