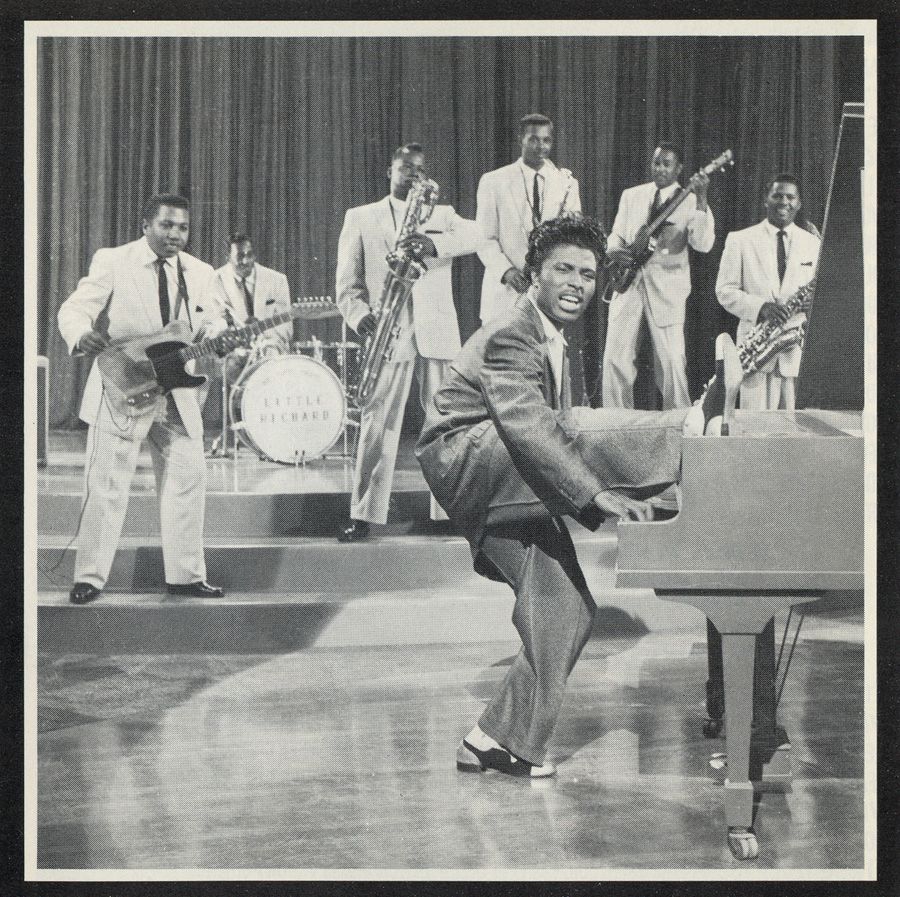 After having lived through the last forty-eight hours, today’s post title was the first thing I could think of.

Plus, right now I’m typing with one foot on my desk.

Firstly, it’s been hotter than blazes here in the Bay Area, and while sweating my way through morning to night, all manner of activity has taken place.

Most noteworthy was (as I mentioned on Wednesday) my friend Ian from Castelli has been in town, and on Tuesday we dragged one another to a shady spot atop Mount Diablo to watch the third stage of this year’s running of the Tour of California. We gave ourselves ample time, as I had a trailer hitched to the back of my bike loaded down with camp chairs, sandwiches, ice, and canned beverages. (Un)fortunately, there was no parking at the bottom of the hill, so we wound our way towards the heavens, until we were finally able to find a spot in which to stuff his car. From there, we weaved our way up blistering hot tarmac until we found a suitable shady zone to call our own; 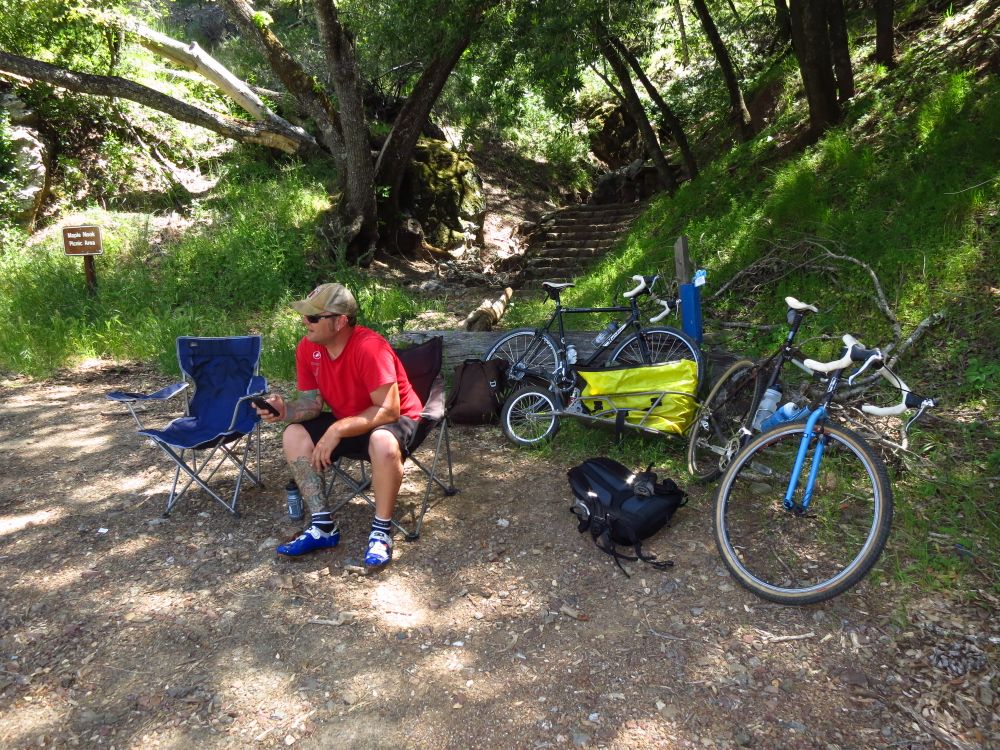 For hours we sat, and shot an array of photos, as well as slapped hands with an array of friends; 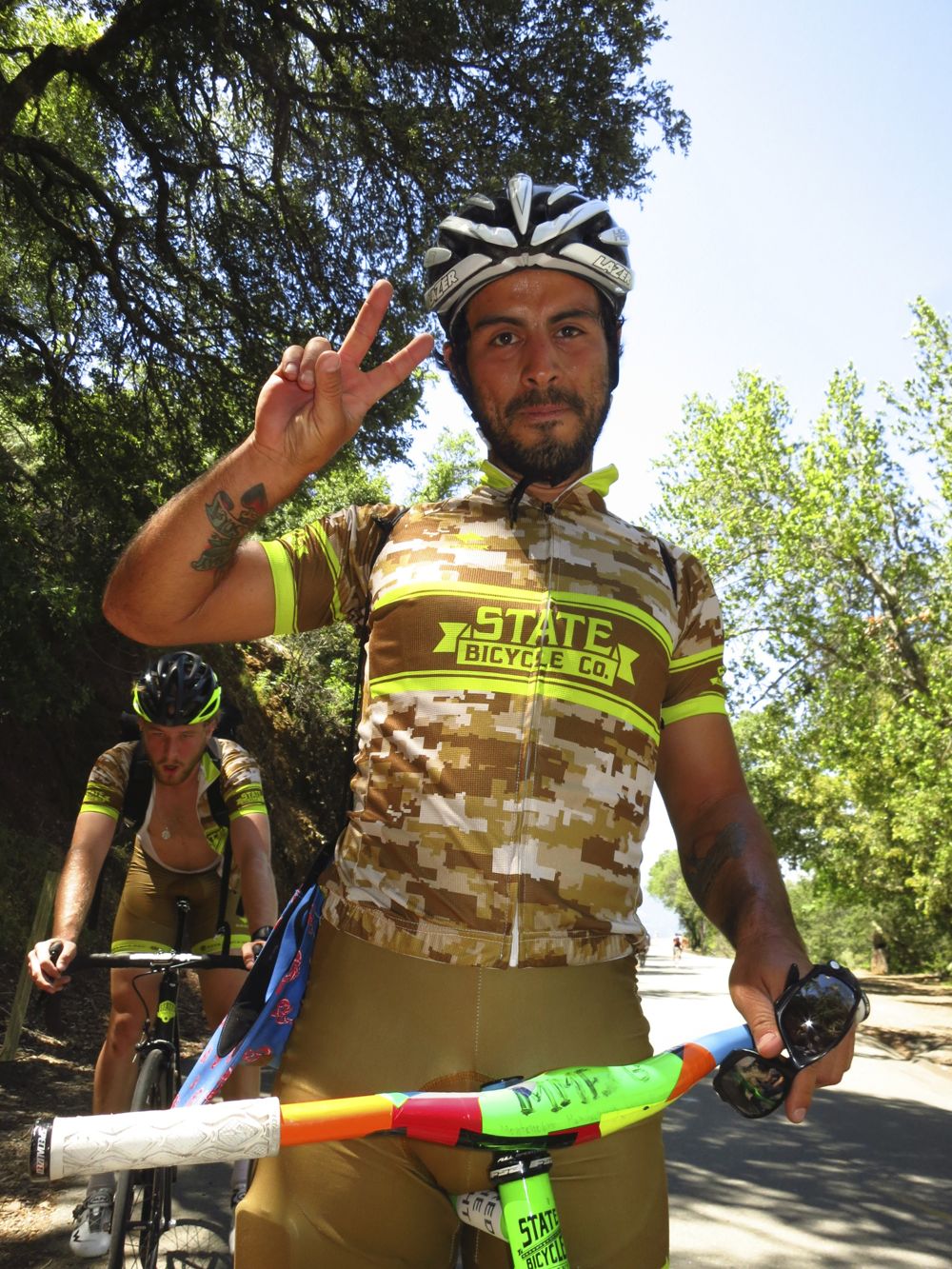 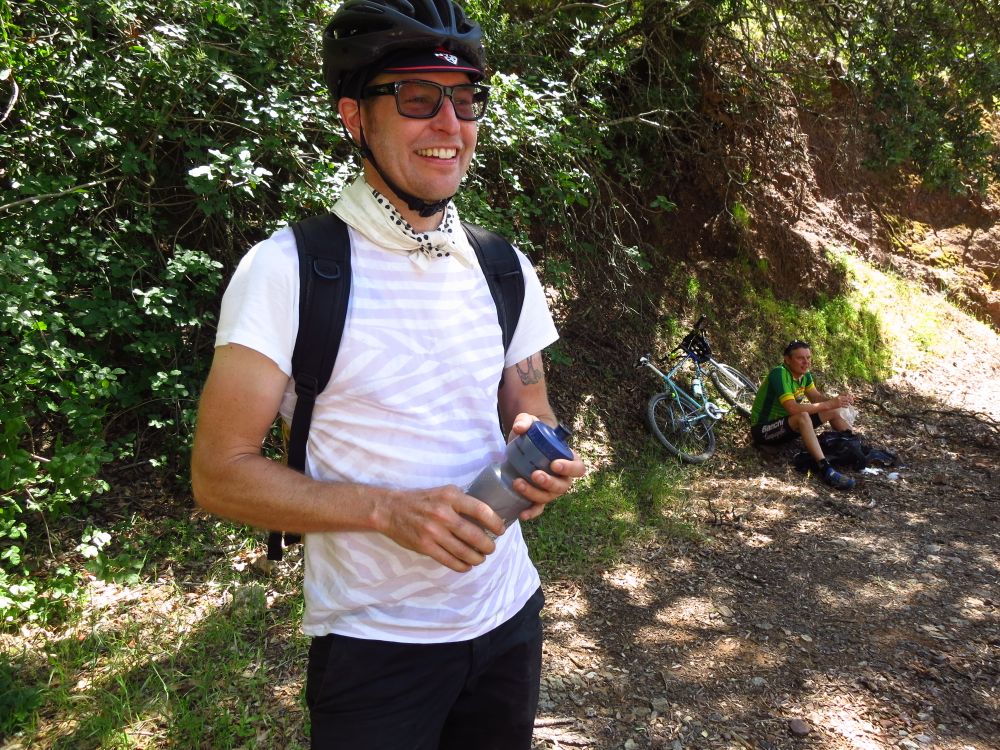 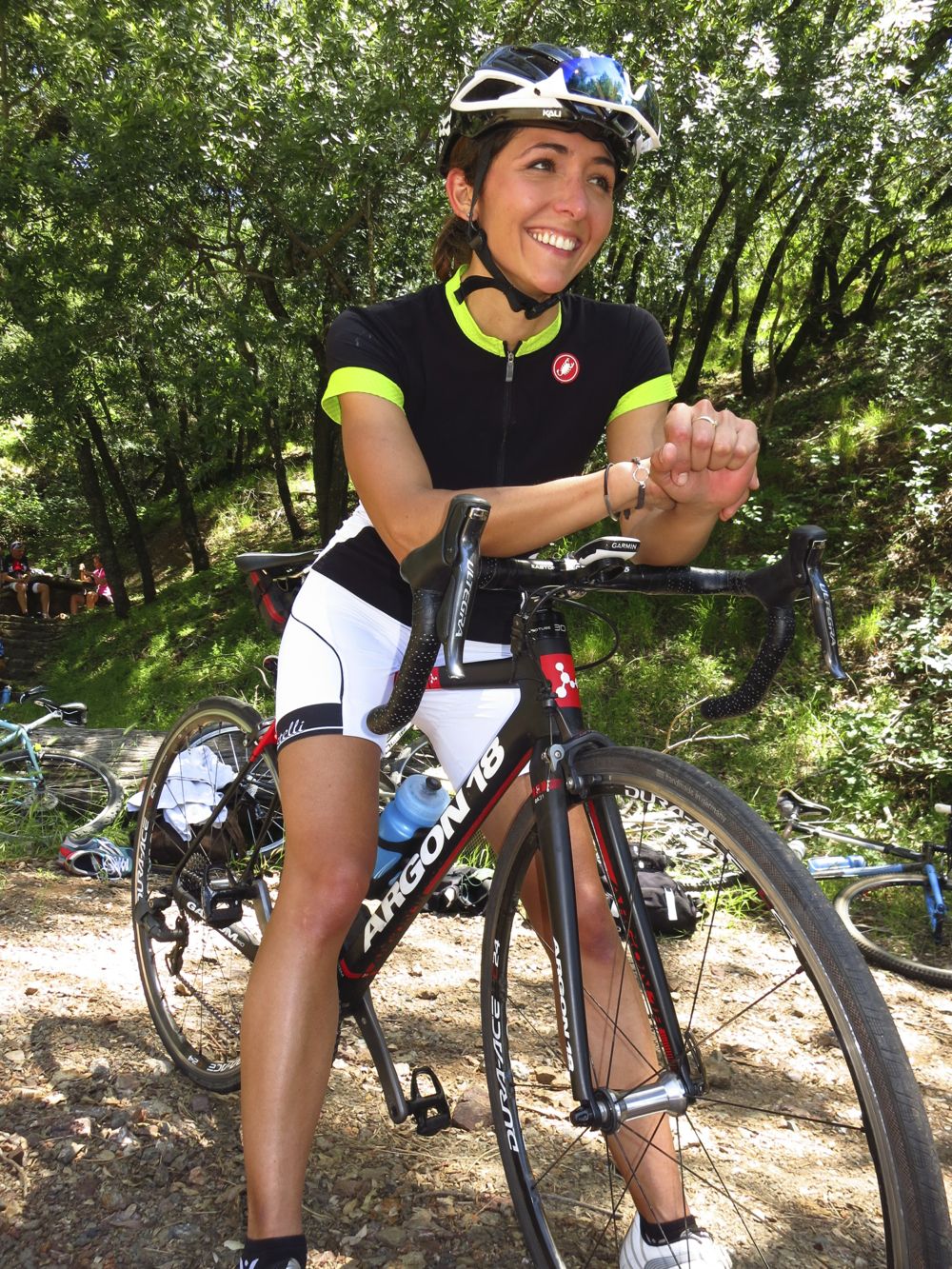 And watched every shape, size and flavor of bikecyclist roll past; 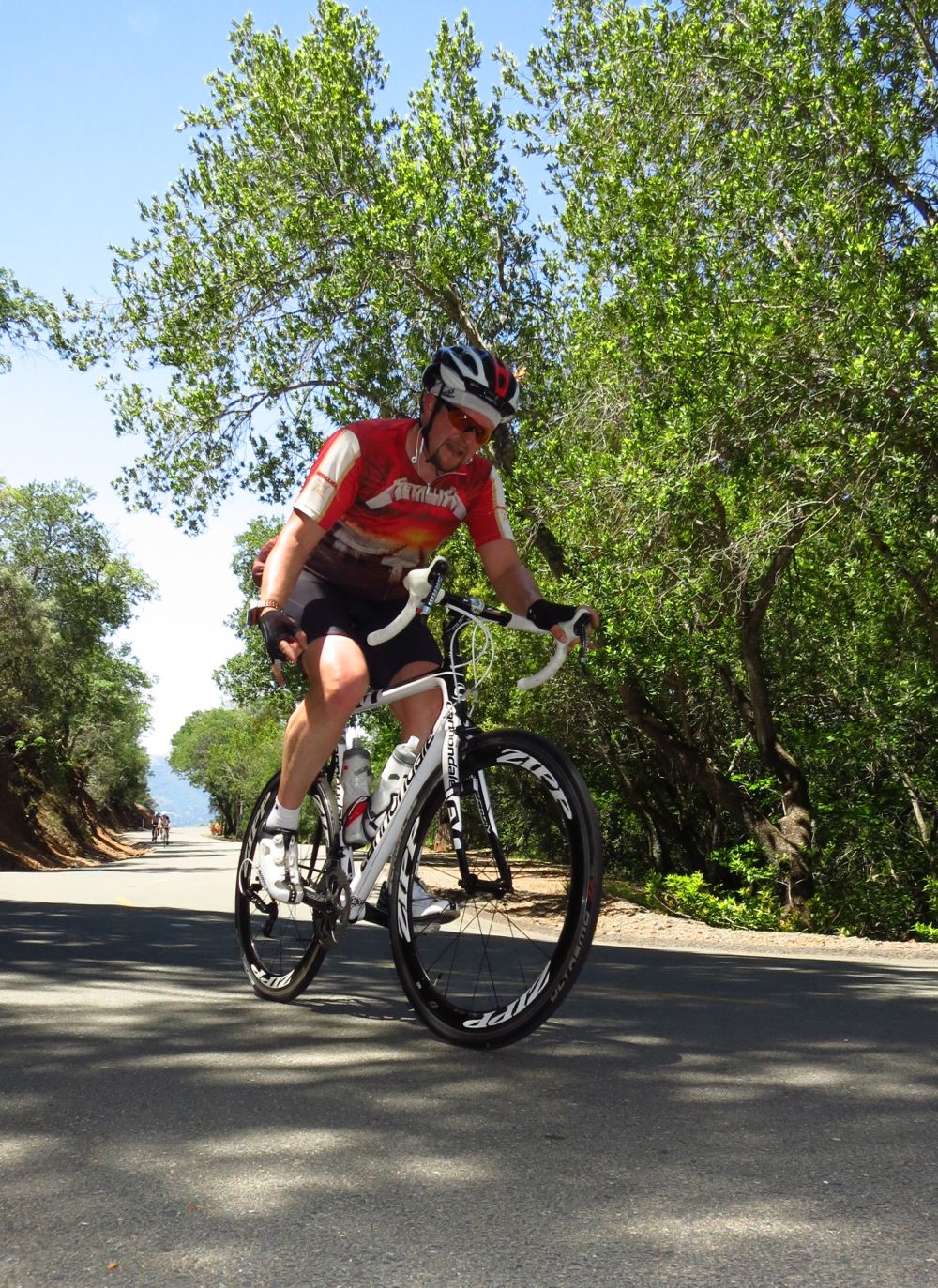 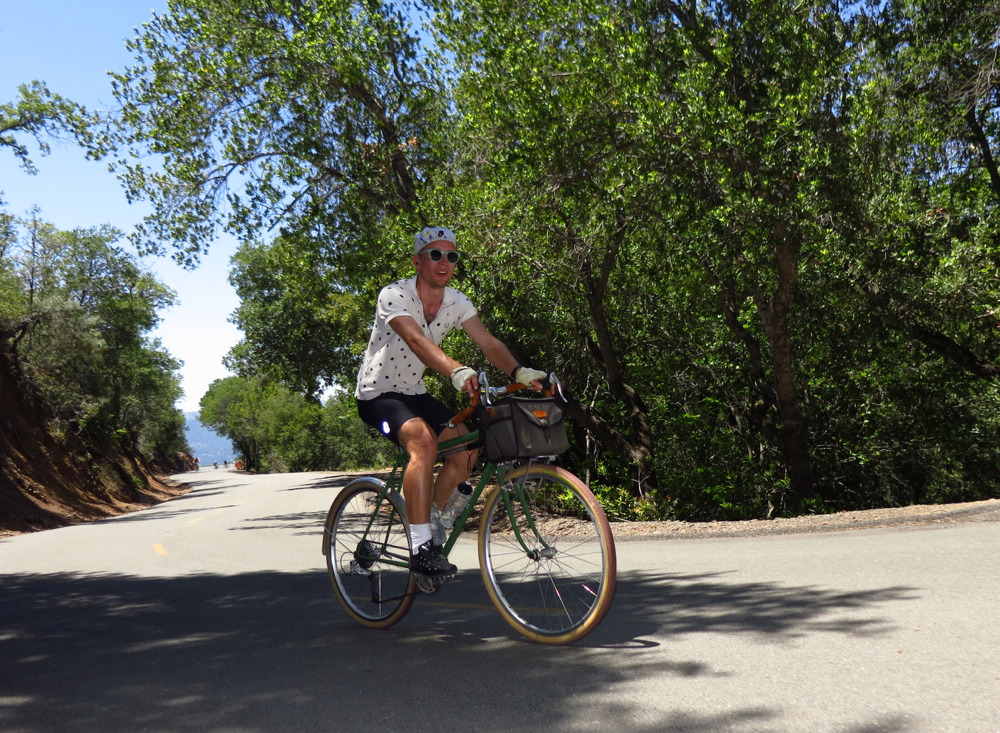 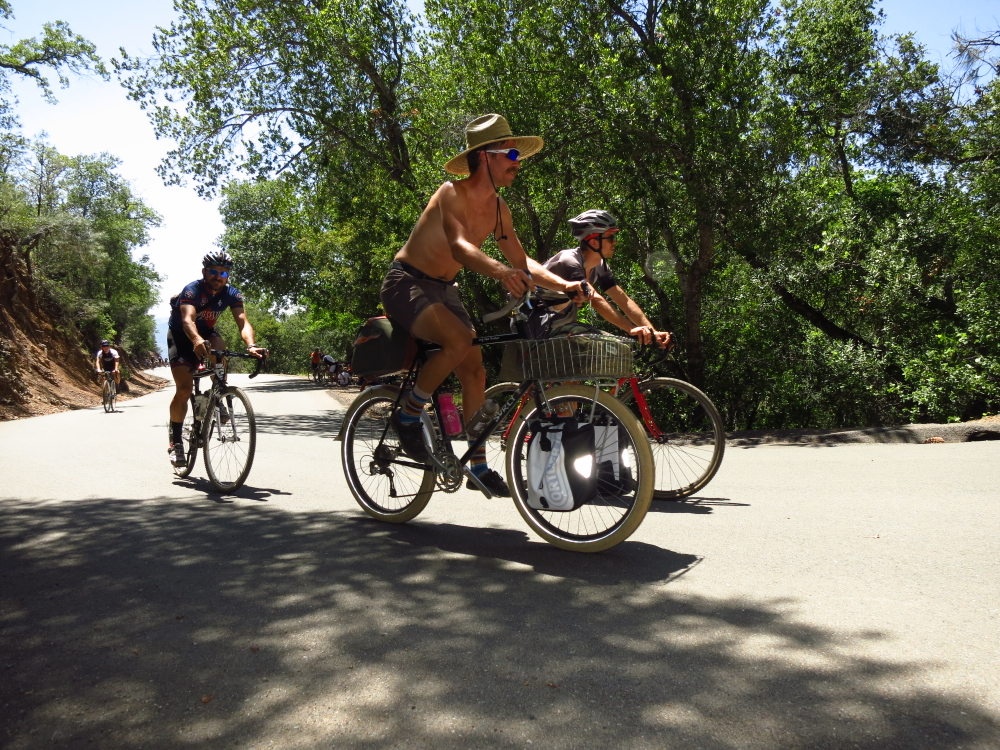 Ian even took a couple of dandy shots he gave me; 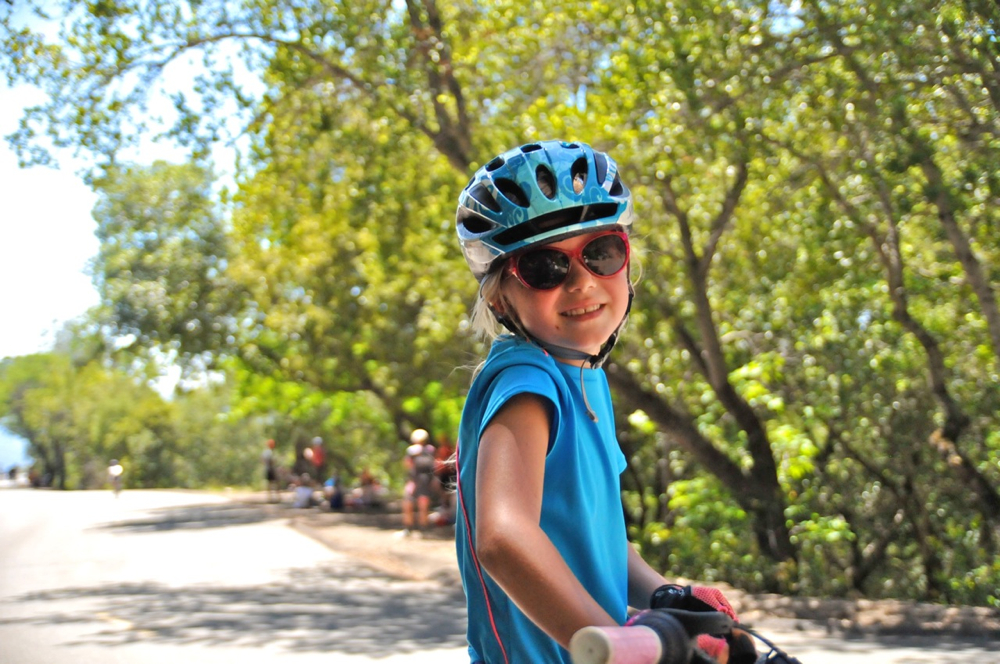 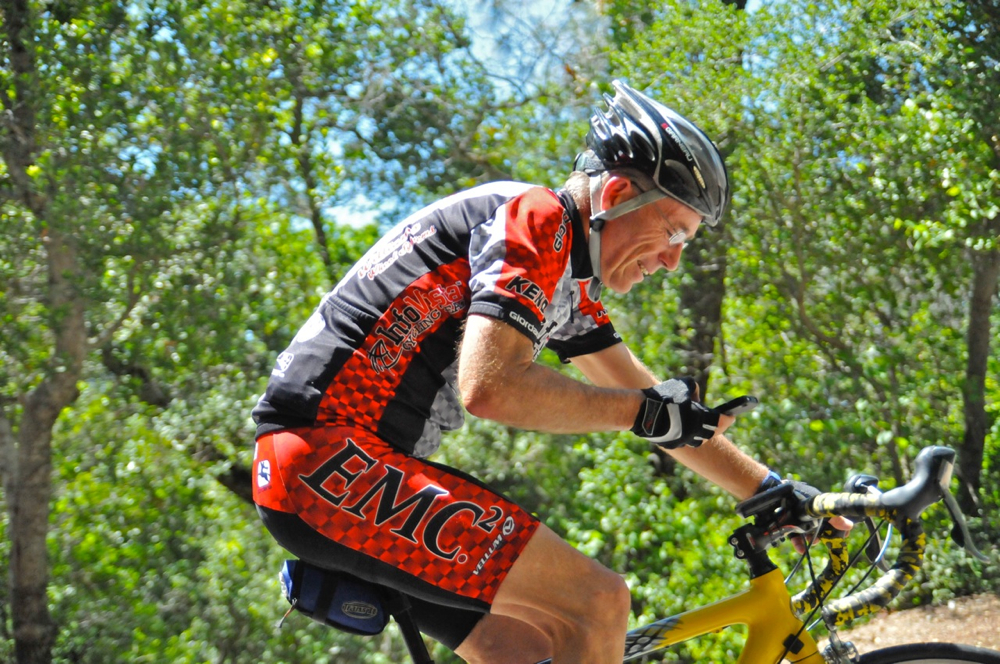 After a time, we heard the helicopters coming nearer. Shortly after that, the race leaders motored past with such speed, they created a much needed breeze on our burning skin.

I positioned myself in the ditch and got a few random hero shots of the honchos; 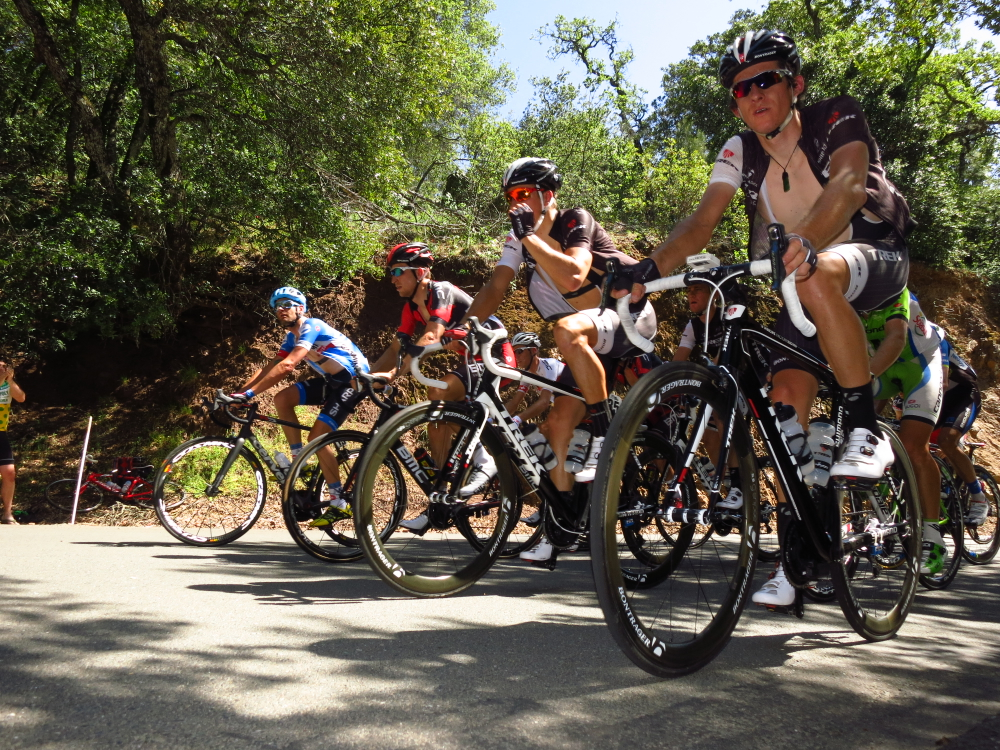 As well as a few specific individuals, like for example this one of Nick Van Der Lijke; Also, just as I noted in this post, it still takes a shit-ton of cars to race bikes; Now, for those who might recall, it was in celebration of Le Tour’s 100 year anniversary that Maximo Supremo residents Giro Sports Group collaborated with renowned photographer Kai Stuht to produce a very limited edition book, chronicling an array of physically attractive people immersed in all phases of the Tour the previous year; 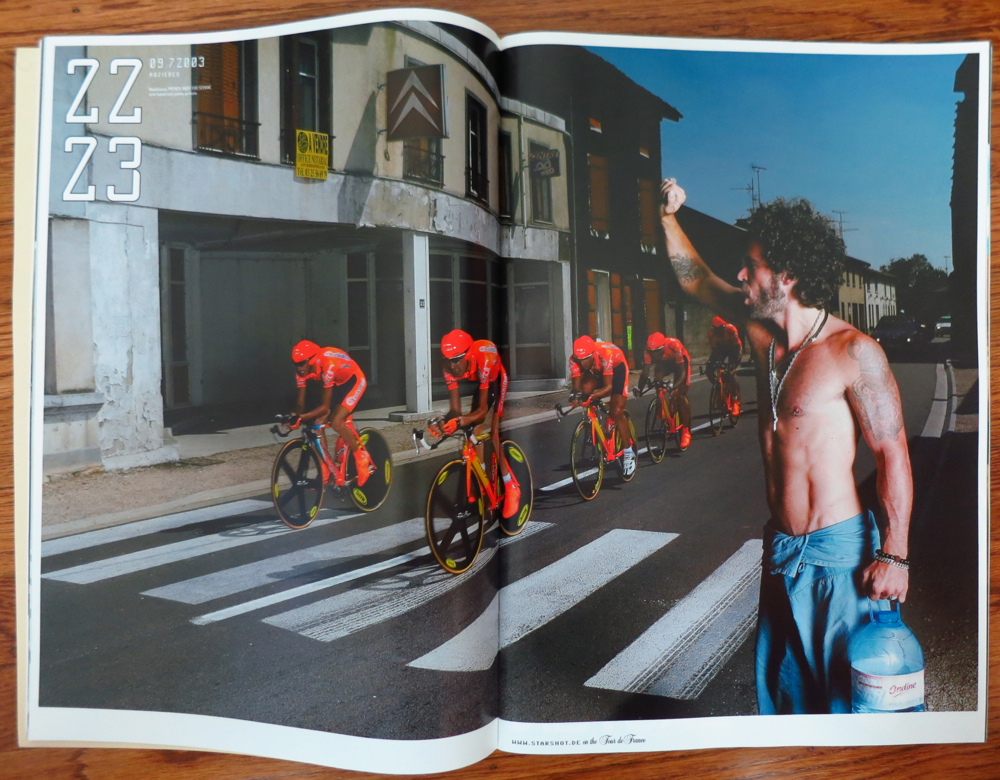 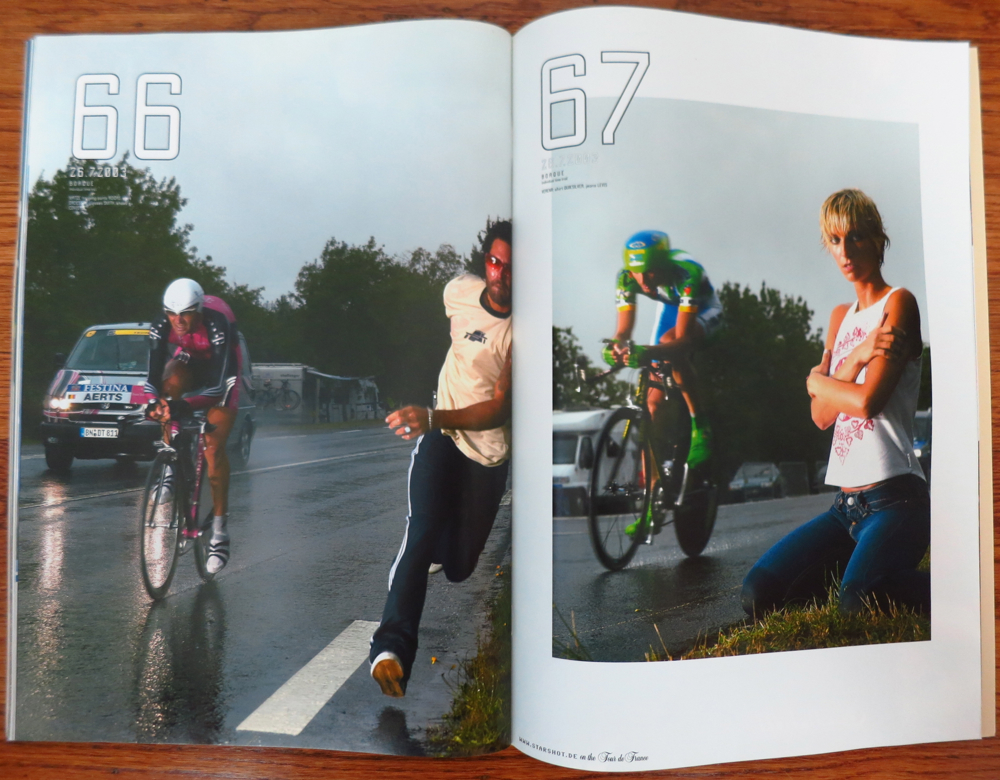 Eventually, while sitting in the ditch, I was inspired by both the book, as well as this photo I took of Michael Bussmann during last summer’s Tour of Colorado; 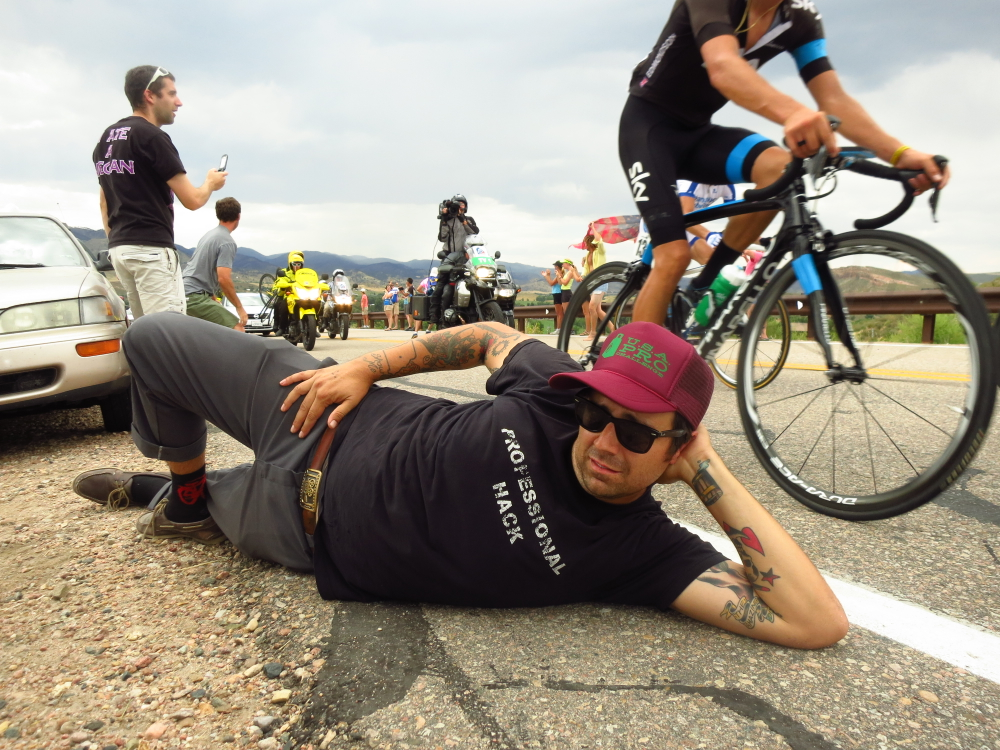 And in front of Ian’s camera, I mustered every bit of blazing white hotness I could, and positioned myself provocatively on the sidelines; 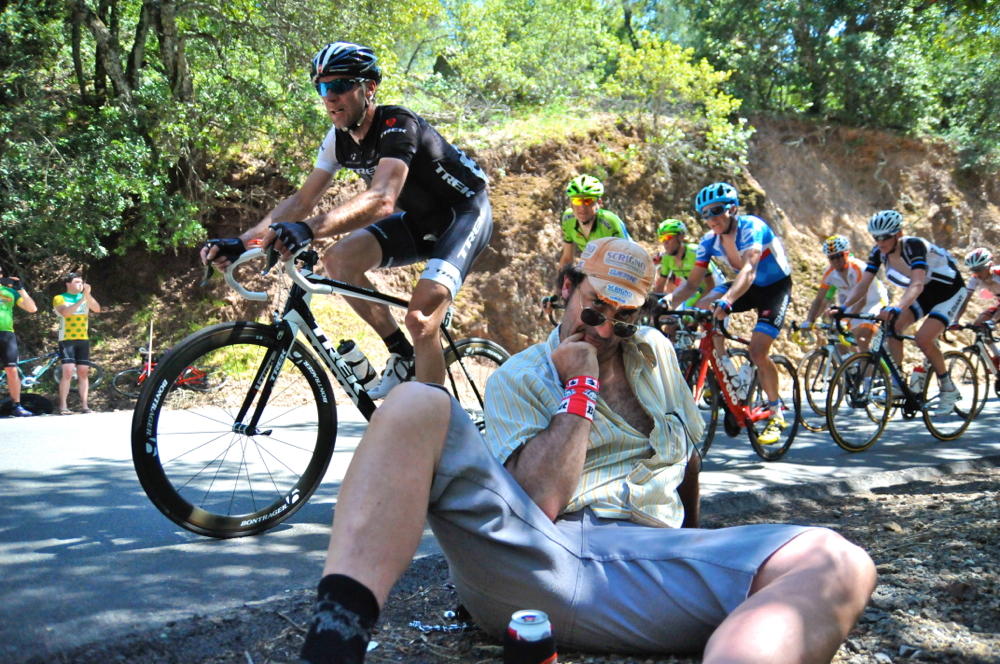 I have many hopes about a lot of stuff, but my singular one regarding this, is that doing it becomes ‘a thing‘.

I’m just waiting for the random anonymito to get in a cry-baby fit about how our actions are an affront to the proud tradition of road racing, and how dare we, bla bla bla…

But I don’t really care about them.

From my perspective, what Bussmann, Ian and I have done is just like the Giro book, but totally different and far more vomit inducing.

So for any and all who have a sexy beast inside of them waiting to get out while posed in front of a pro peloton, you know what to do.

Well, I’ll tell you anyway, because the antibiotics which are currently coursing through my body compel me to do so.

This Sunday, like, day after tomorrow, like Sunday the 18th, is the last and final cut off for orders for the complete brand new full 2014 All Hail The Black Market kit; 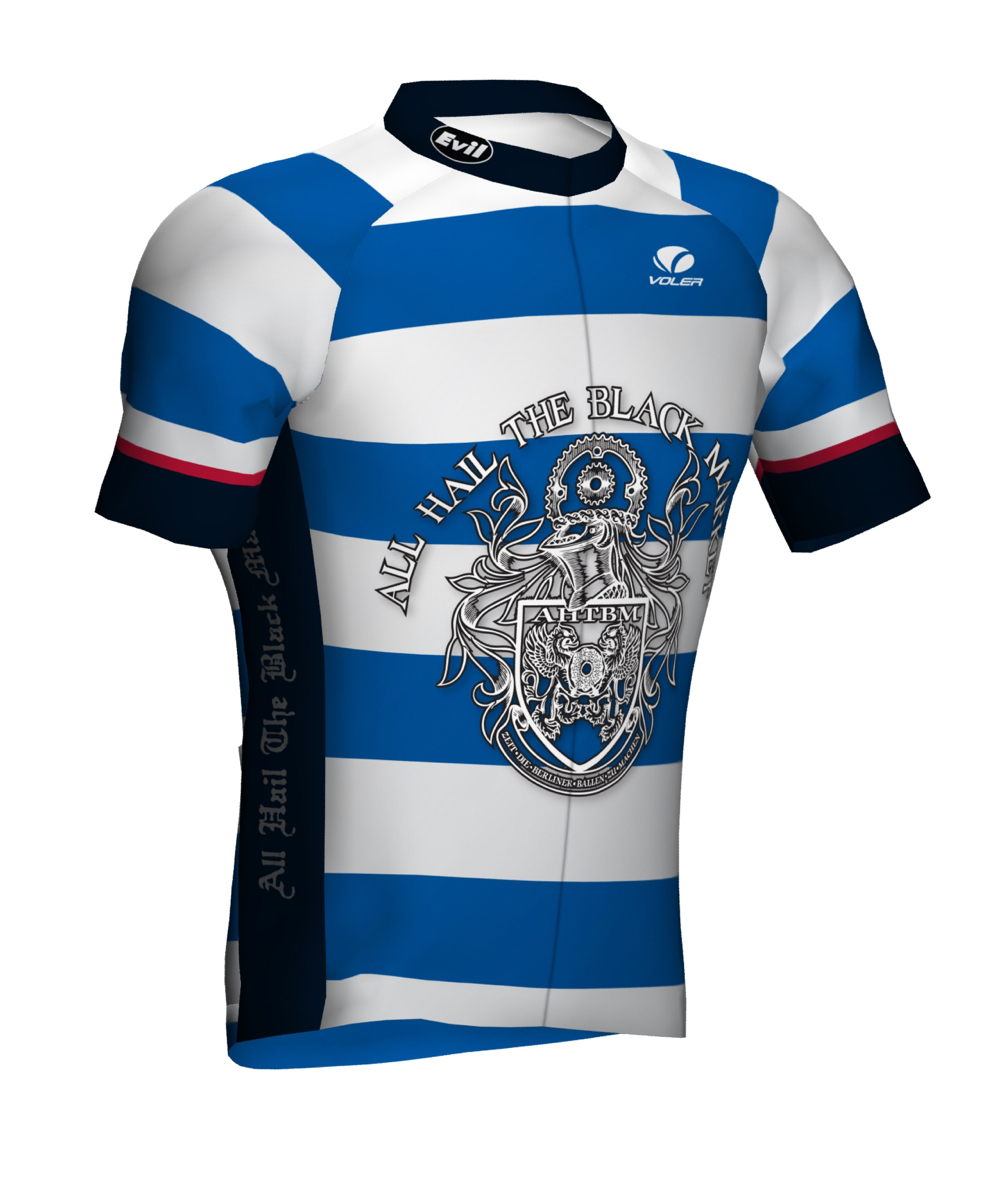 When I say ‘full kit’, I mean items like a long sleeved skinsuit, or the jacket, (my personal favorite is the thermal version), or the vest, and so on.

After Sunday, jerseys will continue to be available, but the rest of the goods will not, so get on the good foot now.

And now that I say that, it occurs to me that I’m not entirely sure what exactly that particular colloquialism refers to. To ‘get on the good foot’ might mean to start with the lead foot, or to begin moving in a specific direction?

Second to any of that, why does getting on the good foot and ‘putting your best foot forward‘ mean two entirely different things?

Though in Little Richard’s case, either most likely refers to which ever one happens to be on the piano.