I have a pile of stuff to handle and a penchant for reckless virtual behavior so let’s get cracking.

Might you remember my tumultuous relationships, first with Gina, and then with Kourtney? The short version is that initially Gina invited me to some big event in Chicago I couldn’t afford to get to, or attend.

After having been shut out in the cold by Gina, Kourtney came along and embraced me in spite of myself. She even offered to send me a book she was pimping called “How to Drink Snake Blood in Vietnam”; 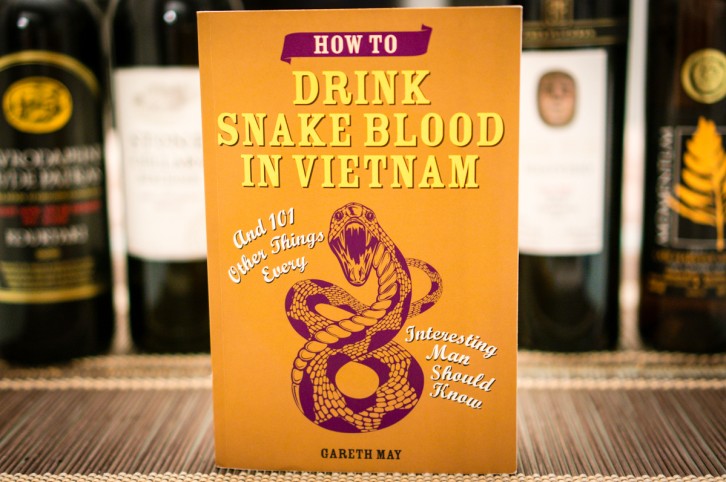 (Photo taken from the internet because I can’t find the ones I took.)
She did end up sending me a copy which I sat on for a while, (one) because I already think I’m the most interesting man in any room, but (two) because I found myself these last few months with no time with which to read.

This all changed with a flight booked to Colorado.

As soon as I sat down in 22D, I cracked it open and proceeded to read it cover to cover. In doing so, I learned that SOS isn’t actually an international distress symbol, but rather a triangle.

And with a brain very figuratively bursting with information, once the plane landed, I promptly debarked and forgot it in the seat pocket.

This was ok though, because I’d already learned how to be an even more interesting person in any room. It was time to pay it forward and let someone else have the chance.

If this book sounds like it would be of interest to you, might I recommend you not use Amazon, (because they suck balls), but instead call your local independent book seller and see if they have a copy either on hand, or available to order for you?

Kourtney would be psyched, as would your local independent book seller.

In other news, I received a highly impersonal mass email from Sally at Raleigh Bicycles detailing a highly personal topic;

“Y’all know me…I’m not going to butter you up with anything or throw out a “hope you’re having a wonderful spring” type of thing. I’m just cutting to the point here as we all have too many emails and other stuff we do during the day. So here’s the quick and dirty.

· Raleigh simply wants to give 2 deserving “families” a complete set of bikes (up to $2500 MSRP) I use quotes around “families” as this is a very loose term… We just want to give deserving people bikes.
· It’s a nomination style submission. Like we state- we all know some pretty amazing people, that do amazing things, and ask very little in return. This is a great opportunity to submit a simple ‘thank you’, and have Raleigh provide them with new bikes.
· We’re not asking for anything out of this. No email sign up. No ‘likes’ to our FB page. We just want an opportunity to pay it forward. (You do have to register to submit, but that’s so we can contact people later on.)
· Submission is easy. Either type some quick words telling why these people deserve new bikes, or submit a video. The video doesn’t have to be fancy. It can be video just talking about the people. (no need for editing, fades, explosions.) *Editor’s note- Explosions can’t hurt.
· After the final submission date, we’ll evaluate the top submissions, pick out six, and we’ll then follow up with those top six and do an equal and fair write up (or video) on all of them and post them up for voting. The top 2 get bikes.

If you’ve made it to the end of this email and feel so inclined to ‘share’ this with your followers, friends, co-workers, neighbors, or submit someone you know yourself, that’d be awesome. And as always, I had very little time to put this together, and even less time to promote so, submission time is rapidly closing. In the short time it’s been up, we’ve received some pretty rad submissions, so I’m going to try and extend it to next week.

Or don’t. You can delete this and move on with your day. It won’t affect our friendship at all.

Until we slap Hi5s and drink all the beers again…”

Now that your directive has been given, you know what to do.

Moving on, the following video has been making the rounds, but thanks to Sheppard, I was ultimately notified that it had in fact finally made it to the YouTubes;

I understand that in light of this occurrence, the race has changed their tagline next year to “Tour of Somerville- Where a D is as good as an A“.

In news of fuzzy companions getting waxed by cars, and their broke-ass frame builder owners scrambling to cover medical costs, it’s been brought to my attention that the feline companion of Marty from Geekhouse Bicycles is in need of help.

Apparently on Memorial Day Shpilkes was hit by a car and badly injured, leaving Marty holding the proverbial bag. Now he’s staring down the barrel of thousands of dollars worth of medical costs and one badly damaged kitty; This is a road I’ve been down and know all too well, as just after striking out on my own and launching this All Hail The Black Market project, my own cat did a multi-day stint in the ER with some emergency surgery thrown in, resulting in ten grand worth of costs.

I don’t know Marty, nor have we ever met, but I did send him an email thanking him for his commitment to his animal. Too many times I’ve seen people give up on their fuzzy pal, be it a cat, or a dog, or whatever, simply because the costs became too much of an inconvenience, which to me is absolutely inconceivable.

If by chance you have a five or a ten of maybe even bigger spot to throw his way, you can do so here, I know both Marty and Shpilkes would appreciate it.

*Update- Thanks to the fundraising efforts, they surpassed the $4000 goal for Shpilkes’ direct bills, which means any donations from here forward all go directly to Angell Rescue and the MSPCA.

As long as we’re on the topic of helping hands, as a reminder from Wednesday’s post, Monday is the big day for Chuey, so if you could come lend your support, our community would certainly be thankful; And as a reminder, in order to get into court, you must first pass through security, so any CO2 cartridges you might have in your tool bag, or pocket knives or whatever should be left at home for the day. Thank you for your time and consideration on this matter.

Finally in news of the dearly departed, Ezra Caldwell of Fast Boy Bicycles recently lost his long battle with Cancer;

Though I didn’t know him personally, we shared a number of friends, and he most certainly was cut from a distinct and unique cloth. Just from watching him from the periphery, anyone with two eyes could tell that he was hard as nails, and had a unique determination all his own. It’s with the utmost respect that I wish him Godspeed onto whatever journey lies next; Photo courtesy Adventure Journal.
Ezra lived life by his own rules, and fought his illness both with the tenacity of a true warrior, while keeping two middle fingers raised high.

Leeroy Jenkins would be proud.