After having been away and back again for the last several weeks, a few items have come across my radar that I feel the need to address.

Whether I do it with such flair as the little lady (or fellow) depicted above is totally possible, though not probably.

It was a year and a half ago when a fellow up there in Portland named Toren got in touch about an invention he’d come up with. So as to not make anyone rack their brains trying to recall what it was he said, I’ll simply re-post his email and the contained information here;

“Stevil,
I received your name from Matt Case at Cyclone. My name is Tory Orzeck and I’m an industrial designer in Portland Oregon.

My day job is running a boutique [read: small] design firm called FUSE, but I just launched a project on Kickstarter. 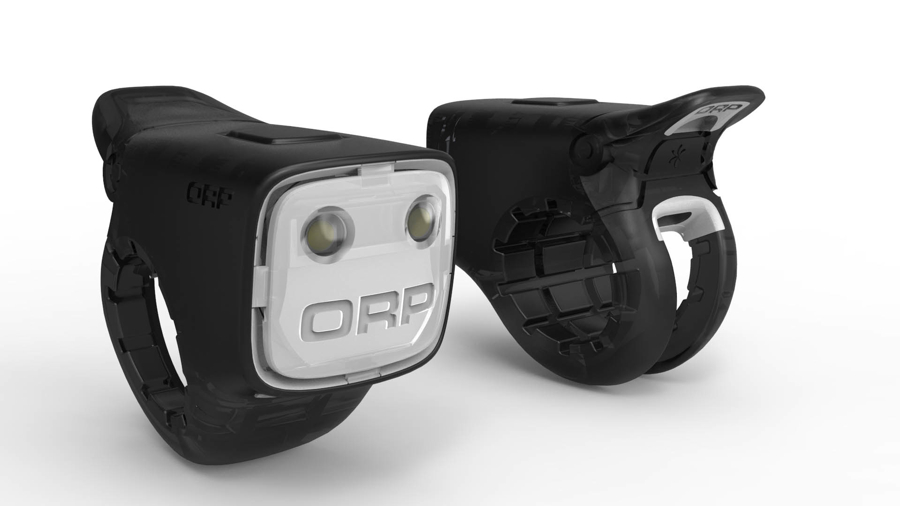 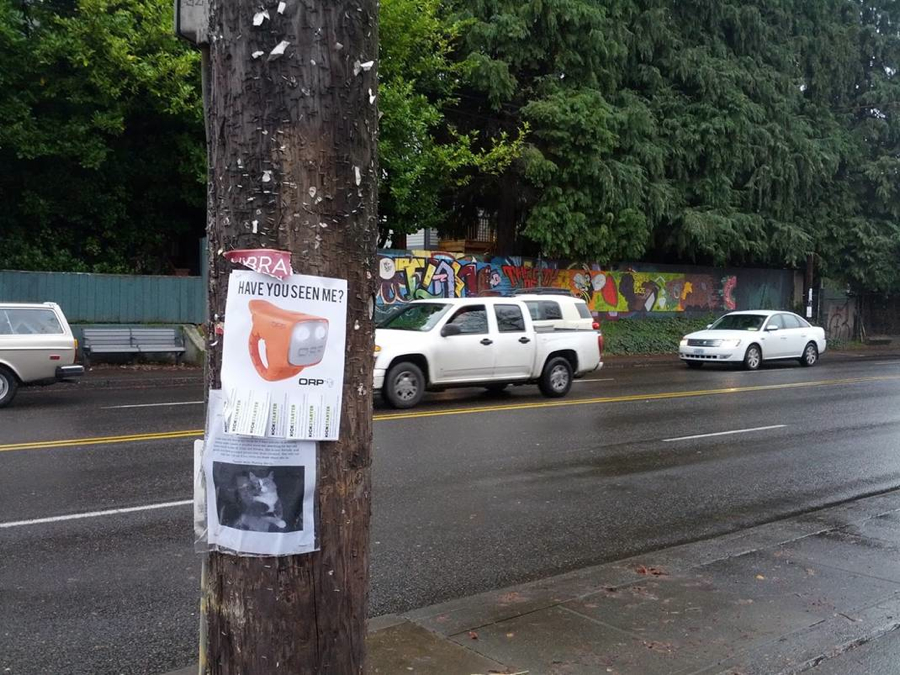 In all honesty, like a number of brainchild projects that get pitched towards me, I thought to myself “interesting concept, well thought out, but it’s probably the last I’ll hear of it, etc.”

As it turns out, I returned home from some time away or another recently, and what to my surprise did I find but a package from Toren himself containing not one, but two of his ORP lights; 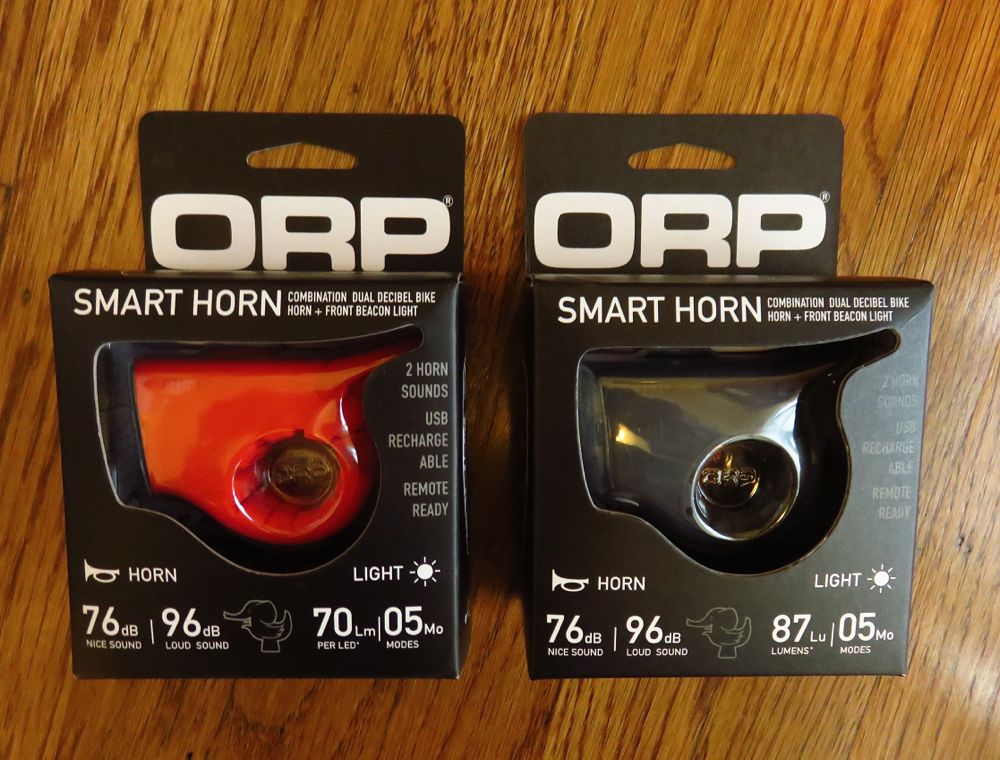 Firstly, I’m a sucker for cool packaging, which the ORP has in spades; 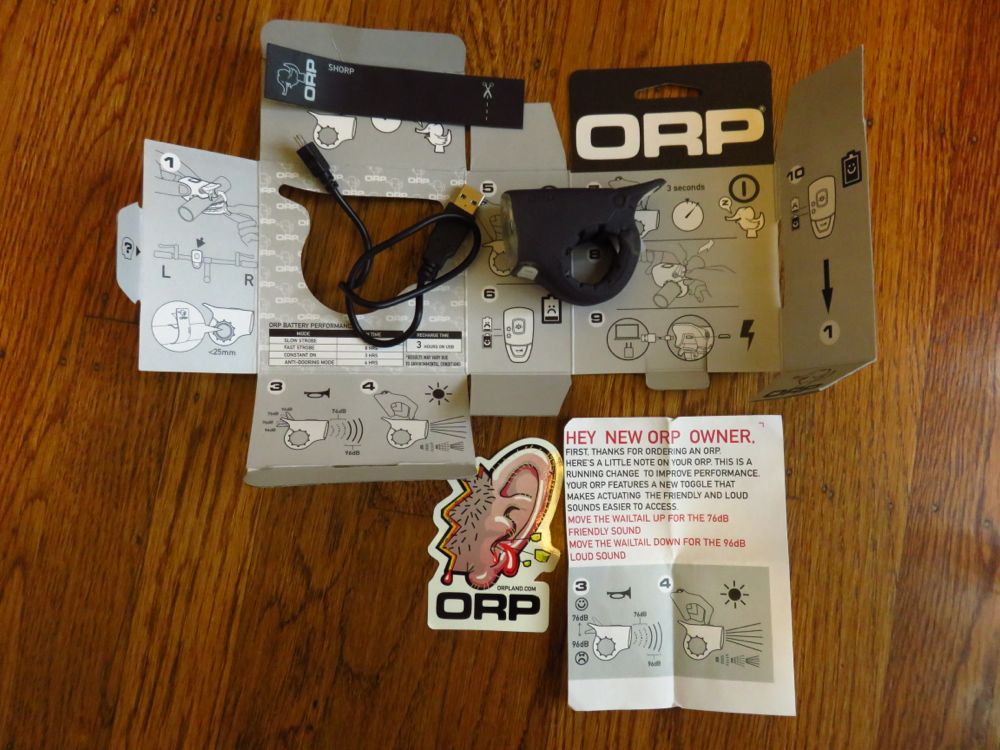 But whatever. None of that matters at all if the product in questions sucks.

So I still wasn’t quite getting the concept of this little number until I had it charged and started fussing around with it.

Basically, the paddle on the back of the light is a trigger for what is essentially a rape alarm.

When I was in college, my housemate Erin’s dad gave her a little yellow box, with a pin in it. The function was basically, if she were ever attacked, to remove the pin and such a loud and disorienting blast emitted from it, that it would force the attacker to retreat. Naturally, I was intrigued, and thought there was no way such volume could emanate from this little box, so like the inquisitive young fellow I was, I promptly pulled the pin, and was almost immediately shell shocked by the deafening waves of sound that were produced.

Panicked, I couldn’t figure out how to replace the pin, so I did what any industrious individual would do and tossed the sound grenade into the freezer and slammed the door shut.

Though we could still hear it, it wasn’t causing waves of nausea among those of us unfortunate enough to be in close proximity during my experiment.

With no headphones, or ear plugs at our disposal, we devised a chain of people, each covering the ears of the person in front of them, creating a sort of Human Centipede of ear protection that went out of the kitchen and into the adjoining hallway.

Once the pin was safely replaced, we each vowed to never let me play with the rape alarm again.

Anyhow, like Erin’s unit, the ORP is crazy loud, and crazy piercing, and if I were to activate it in a library, I would assuredly be asked to leave and never return.

There are two levels of pants-shittingly loud alarm that the ORP is capable of producing. There’s the 76 dB ‘nice sound’, and the 96dB ‘loud sound’. Granted, if you were tucked inside the insulated confines of your luxury mobile, the ‘loud sound’ would be less of an ear shattering nightmare and more of a simple notification that you should put your phone down.

At posting time, I’m not sure how long a charge will last, but I suppose that depends on how many hours a light is used per charge.

In conclusion, what I have to say is this- So far so good. I’m glad Toren’s vision has finally come to fruition, and I’m grateful that after all of these months, he still thought enough of my perspective to send one to me.

The ORP light should be available through finer retailers, but if worse comes to worse and this seems like something you’d be interested in checking out like, NOW, it’s as easy as going to the ORP site, and turning a few knobs.

Now, speaking of abrasive noise- It was about a month ago when the following video first came across my radar. Though the song doesn’t do much for me, the accompanying visuals are, in my opinion, a thing of greatness;

If you’d rather, just turn down the sound and play this.

Finally in closing, I would like to announce that this coming weekend at Le Luz De Jesus Gallery in Los Angeles, Damian Fulton, who of course was the mastermind behind the unparalleled Radical Rick comic strip is having a show of original panels; From the very first time I ever laid eyes on the antics of our hero and his sidekick, MX Mug in the back pages of BMX Plus, I was hooked. I loved the storyline, I loved the attention to detail, and as a young puke immersed in drawing- All.The.Time. I was positively enthralled with the visuals.

It was a few years ago when I visited the BMX Hall Of Fame (which incidentally was the weekend when I first learned of the majesty of the Wizard Staff), and for the first time saw with my own two eyes, real live Radical Rick panels in the flesh.

When I see original art that I really, really like, I get giddy. Suffice to say, I was like a damned school girl.

Naturally, when I heard that Damian’s remaining drawings were not only going to be exhibited, but for sale, I laid down on the floor and wept silently.

I jockeyed my meager funds to see if I could afford a trip to see the installation on such short notice, but alas, it was for not.

The best I can do is to post this notification here for you and yours who might happen to be in the area.

Seriously, do both yourself and me a favor and get in there to take a peek;

While rad goats getting rad is rad, there is very literally nothing more so than Radical Rick.

7 Responses to “Getting rad is rad.”