For those who might not recall, I decided some months ago to take the last post of every month and include the pre-edited version of the feature I wrote, along with a scan of the accompanying image for the now defunct Paved Magazine. Somehow the end of January escaped me, so I’ll scramble and post it up here today instead.

As I’ve said previously, I certainly do hope you enjoy it. If not, we can meet up here again on Wednesday for the same mumbo jumbo as always. 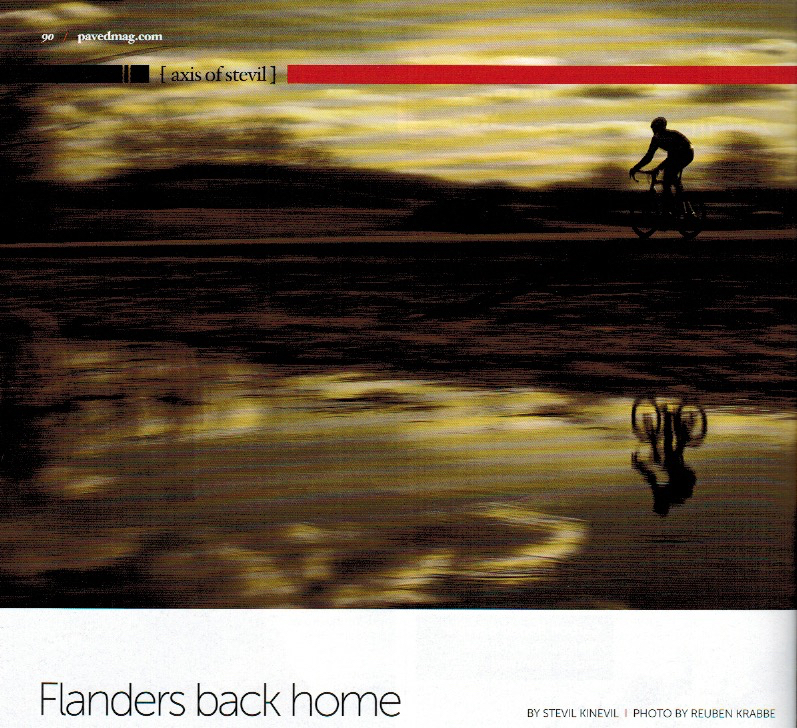 Winter 2011
There’s an open stretch of road I’ve recently discovered. It leads from my front door to the edge of the horizon, which I’ve affectionately dubbed ‘Little Belgium’, as it traverses an array of rarely used, and desolate farm roads. What these winding black ribbons of tarmac don’t have in cobbles, they more than make up for in dried and flattened mud clods and potholes. With the blue waters of Monterey Bay in the distance, it winds through miles of sweet smelling strawberry fields, the air thick with the crop’s essence.

Those are countered with not so sweet smelling manure fields, the stench of which is at times so thick you can taste it on your lips. While it is a pleasure to do the ride on days when the sun is shining brightly across the endless plains of green and brown, the preferred climate is blustery, with wet fog rolling in off of the Pacific creating a multi-directional headwind that I imagine to be unlike any found on earth. Except possibly for the ride’s namesake.

As I get lost in the mesmerizing rows of cabbage, and brussels sprouts, a tractor passes by, its enormous tires rotating out a unique and specific rhythm, a gloved hand jutting out waving hello. Piles of irrigation equipment are dismantled and stacked neatly on a dirty trailer next to a dilapidated out building, ready to be taken to some other corner of the bountiful expanse and the wind is still in my ears. This place just feels right.

With an open straight away ahead that eventually dissolves into a dirt left before me, I shift into a higher gear, and fall into the drops. False flats give way to unassuming and surprisingly difficult rollers, doling out repeated kicks to the jewels, both mental, and physical. My imagination takes a hold and just as when I was a child, certain that beneath every rock lay a buried treasure and within the root tangle of every uprooted tree hid a gold nugget, I am sure in my periphery I can see the wheel of Herman Frison, or Andrei Tchmil closing in as I struggle to maintain my position in the fantasy Kermeese.

I’ve only once passed through Belgium, though I’ve never seen any Classics in the flesh. Since I was an impressionable young punk in high school, I’ve only watched them on television and read about them in magazines. Perhaps one day I can watch Heisel or Boonen, the modern day hard men do what they do best, or witness Hincapie, bless his heart, almost perform good enough for a win.

I have no false notions. I am an armchair Belgiphile in a few senses of the word, but here in my backyard, I have my own little slice of Flanders and until I can one day get a taste of the real thing, for the time being what I’ve got is pretty good. And to that end, pretty good is good enough for me.

4 Responses to “I totally forgot about the month end cop-out.”