Oh, no way! Me too! And as someone with the like as well as a forum on which to discuss them, I’m gonna get straight into business with a couple of items that have recently shown up in my mitts, that I’m pretty sure were supposed to be for me.

The first one(s) are some things that are designed to go on your feet, or in a pinch, to hold a door open.

For years and years I was a big fan of Shimano shoes. As a matter of fact, those were all I used, until Giro came along and started making some that sent my heart fully fluttering.

As anyone who’s paid attention to anything relating to their kicks knows, over the last year and a half or so, they’ve gone super big with laced up shoes; 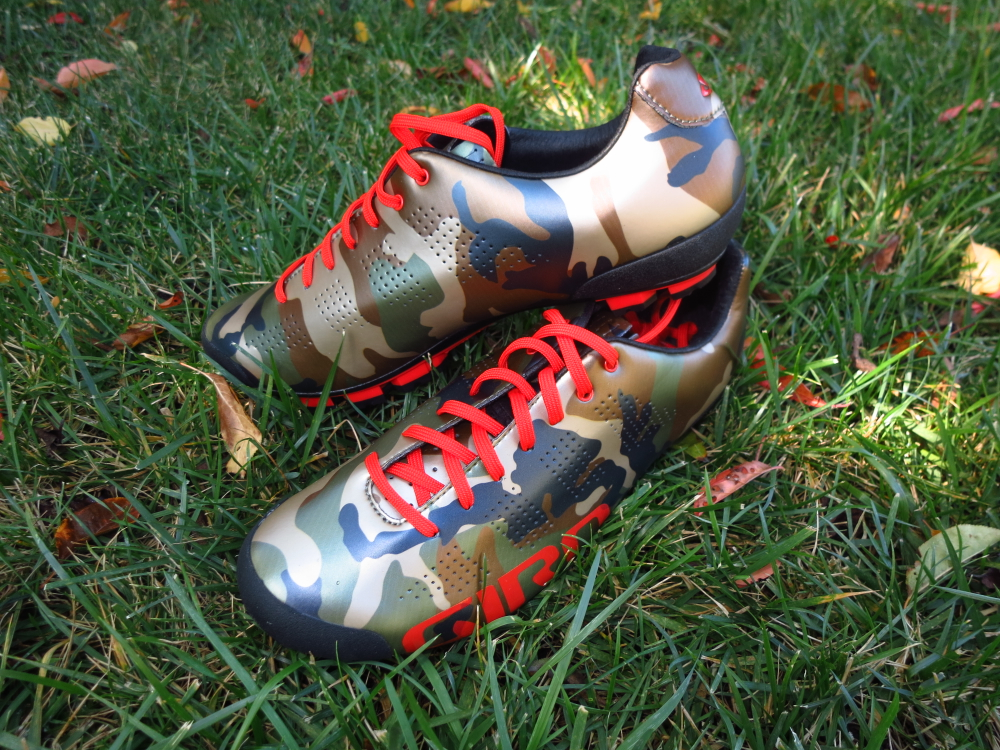 As a matter of fact, the world at large seems to have gone completely bananas for those dogs, and it seems the only person who doesn’t care for the laced shoes is me. The primary reason being that my feet are totally average, so I don’t have a use for the fit customization that they provide. Secondarily, I’m legendarily lazy, and can’t be bothered to waste time tying my shoes. Thirdly, I love the asthetic of the buckles. From Sidis, to Northwave, and all shoes in between, I always have. They’re like having little robots on my feet.

About a year ago I got some of them snappy burnt orange Privateers. I’ve loved and absolutely wrung nearly every bit of life out of them, so it was time for something new. I sent them my obligatory pathetic, and pleading request, along with a cashier’s check, and faster than you can say ‘matte black’, what should show up a couple days later but a pair of the new Codes; 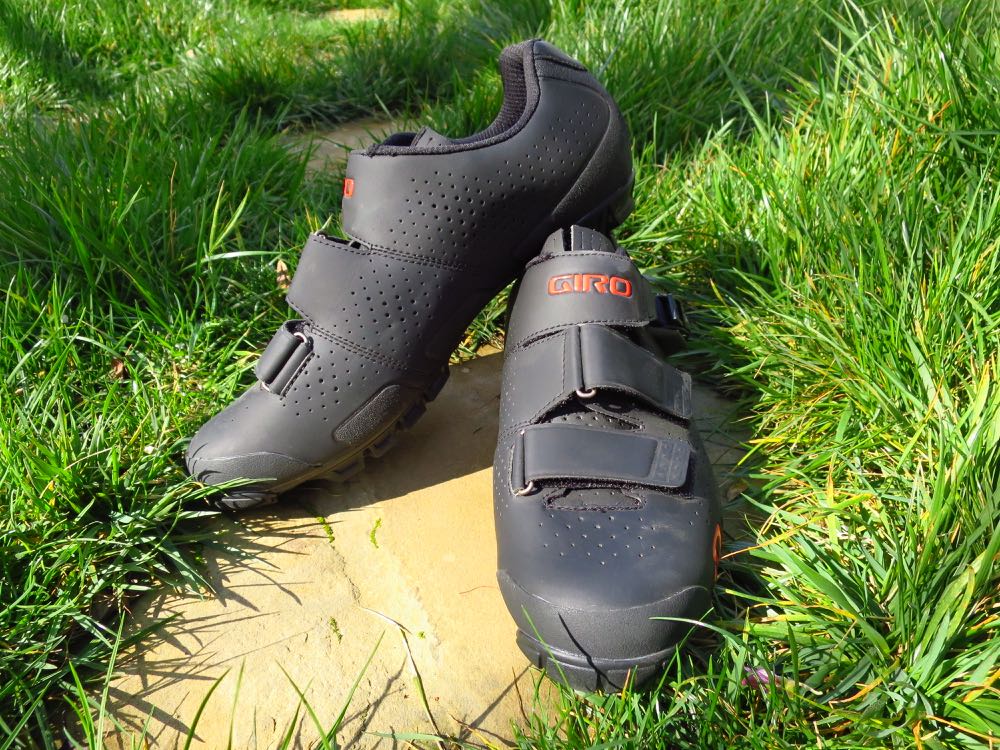 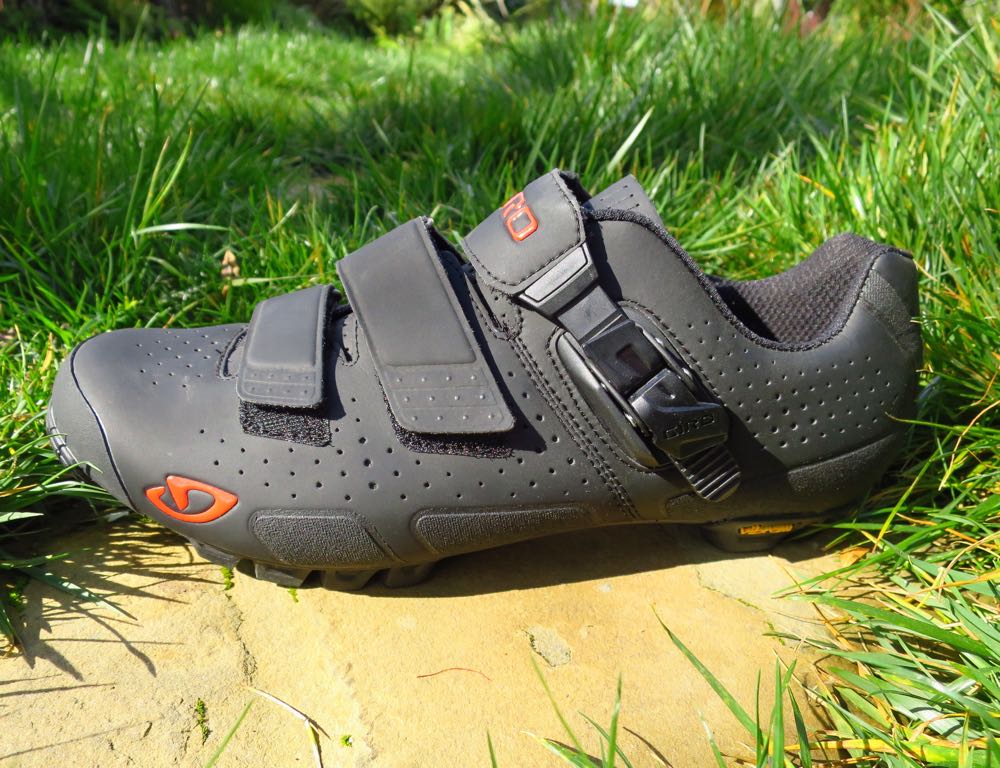 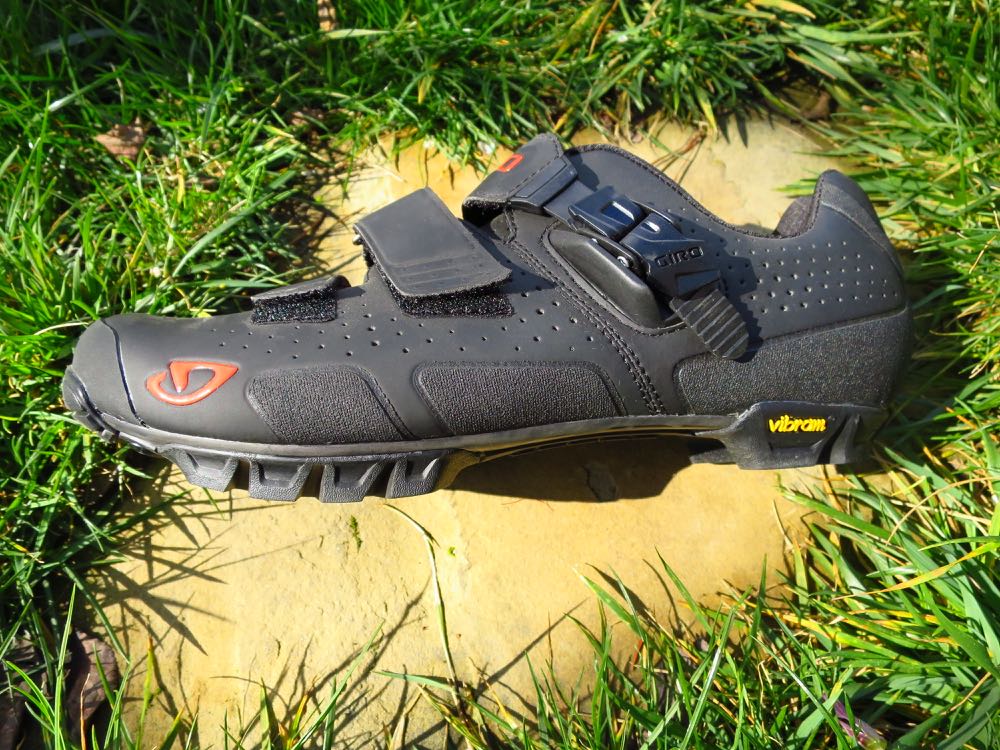 As you can see, these have them new Vibram soles, which means they are 120% comfier to walk in than your standard, run of the mill bike shoe.

I’m genuinely looking forward to putting these through some paces, and experiencing many enjoyable hours in the woods together, which will eventually end up in a discussion concluding with my bloody pentagram rating system;

Five is good. One is bad. I think the lowest rating anything had ever gotten on this site is a three, (with the exception of Easton’s customer service. They got a zero.) Because (comped or not), I’d really rather not waste my time using crappy products.

Anyway, I appreciate Giro’s consideration, and I thank them for their trust and kindness.

Then, if clothes for my feet weren’t enough to gush about, I have some words regarding clothes for my body. You see, at last August’s Kona launch I met a woman who at the time was in their employ named Ashley.

Shortly after that, she moved back to Idaho and began working with a company I’m sure most everyone is familiar with called Club Ride. In fact, a few years ago I sent them an email asking about potentially partnering with me on some sort of project or another. They never replied, so being the go-getter that I am, I immediately gave up.

Anyway, Ashley put me in touch with a woman named Kelli who was looking for bringing on what they called ‘brand ambassadors’. I filled out a few applications, all of which I peppered with self deprecating acknowledgment that they’d be better served offering clothing to a local homeless man than me, but just the same, what should show up at my house the other day but a couple of their western shirts, one being the Go West; 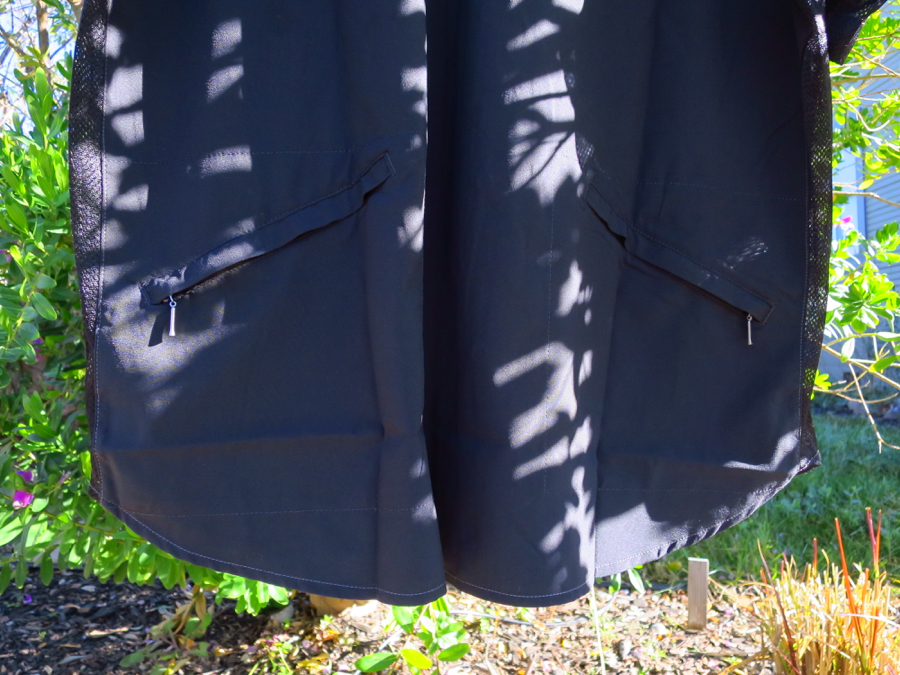 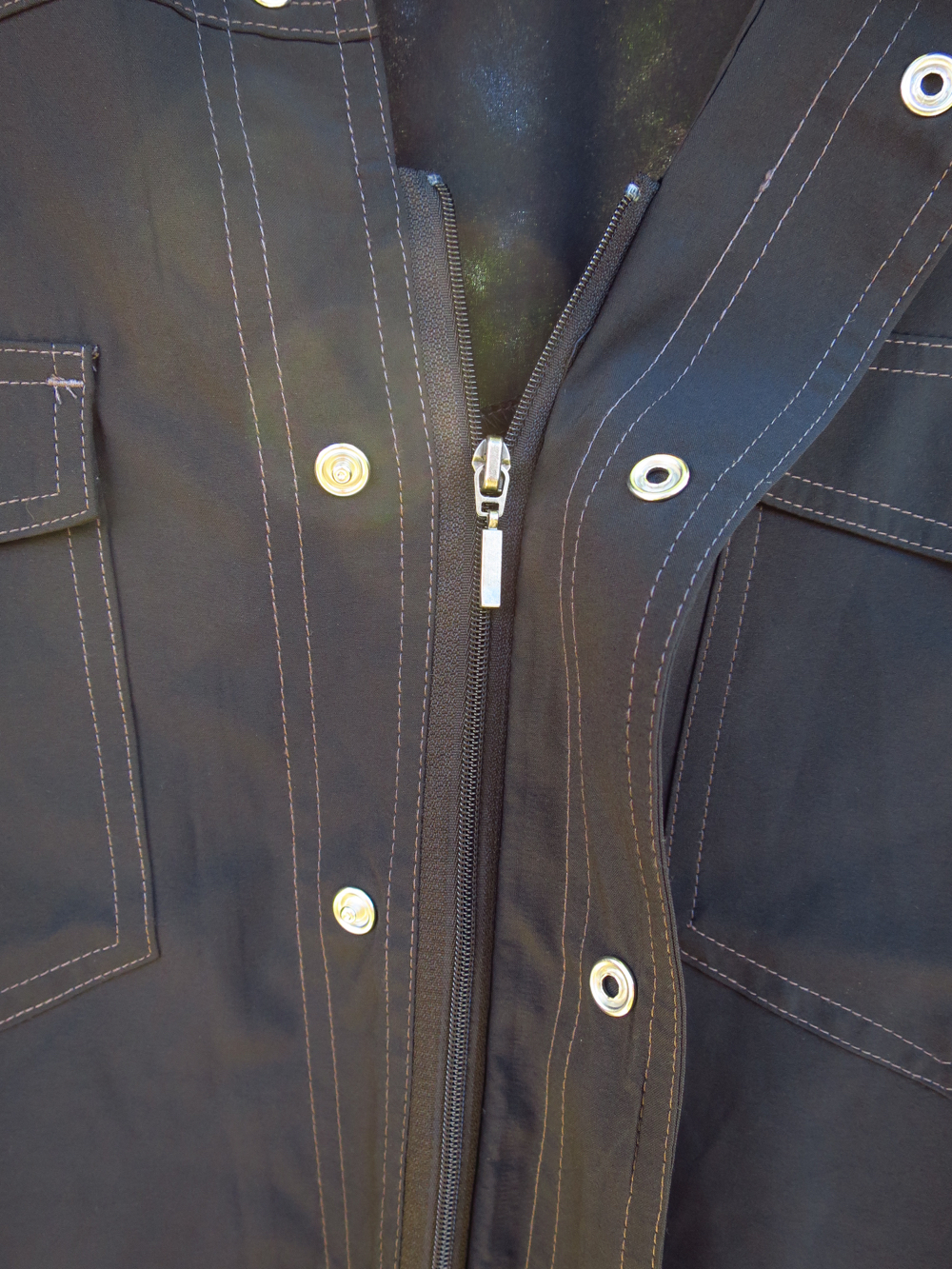 And the other being their Jack Flannel; 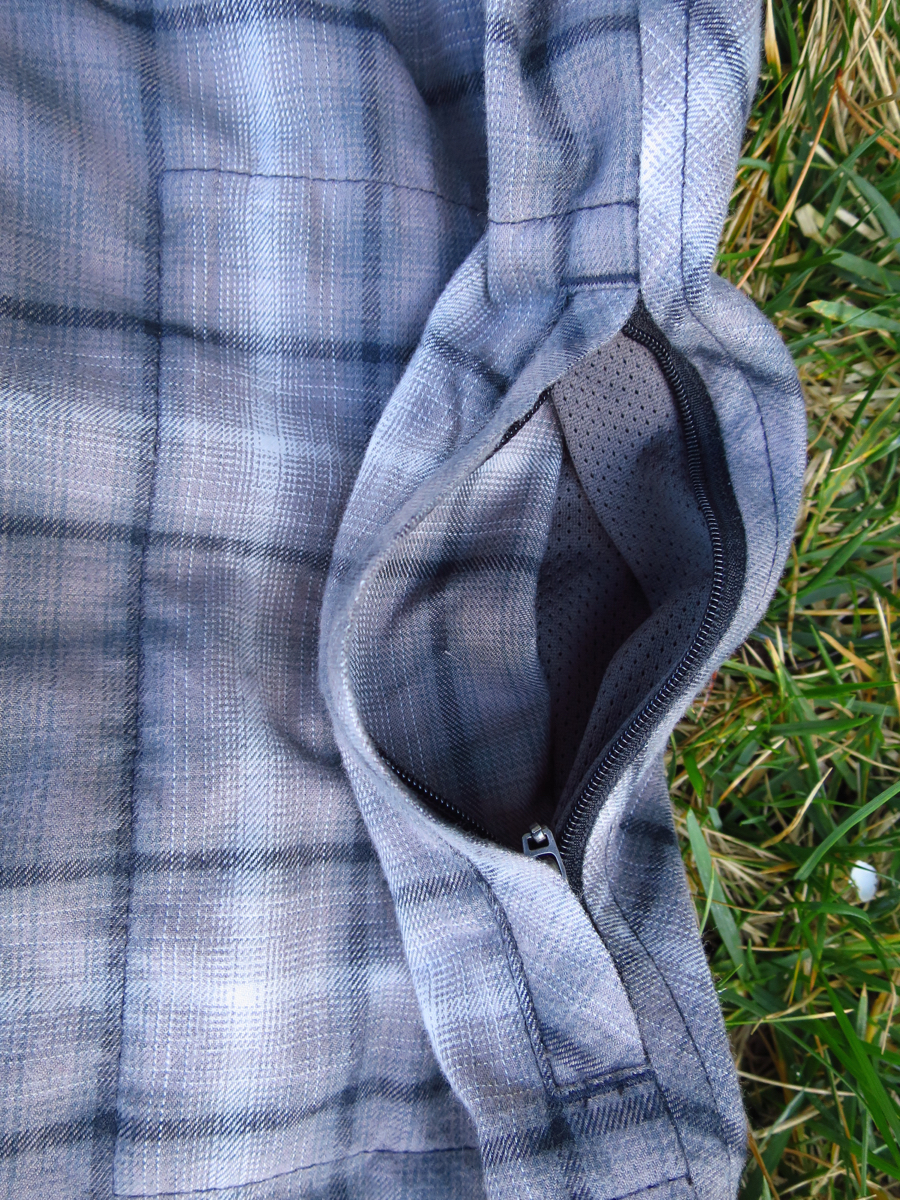 Bad ass. I’m a huge fan of cowboy shirts, and even mentioned to the powers that be at Swobo V.1 back in the 90s that they really should make something similar to this, but like most of my ideas, it was ignored.

Anyway, these are far and above better than my original idea, as they are made of tech, UV blocking fabric, have stash pockets, vents, as well as a host of other bells and whistles.

Despite all of the technology invested in these jerseys, they’ll still look just as cool when they finally get ‘Cootered’.

(That’s Sacramento-ese for cutting the sleeves off); 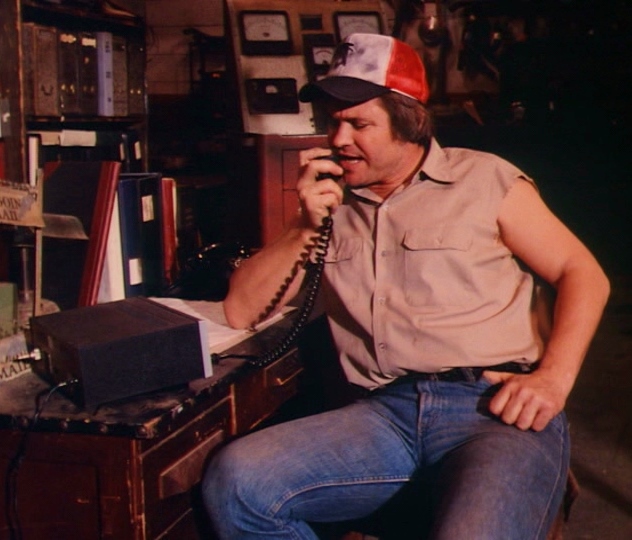 I’d like to thanks Ashley, Kelli, and all of the kind people at Club Ride for both the shirts, as well as not throwing my applications in the trash where they belong, and I look forward to making them regret their decision to bring me into the fold.

In news of public nudity, riding bikes inside and/or vomiting in a bucket, it’s come to my attention that after seven years, the KC Sprints are shuttering their operation this weekend.

Since you are a professional bike blogger guy and occasionally you post events on your fine little corner of the web and are a quasi KC Sprints sponsor, I was hoping that you could make mention of KC Sprints in your online scribbling.

Coming up quick, as in this Saturday, the last KC Sprints Goldsprints race.

Its been 7 years and as much fun as its been we are calling it quits, at least for the gold sprints.

In celebration of the end on Valentines Day at the Buzzard Beach in Kansas City, Missouri is the KC Sprints Retirement Race. 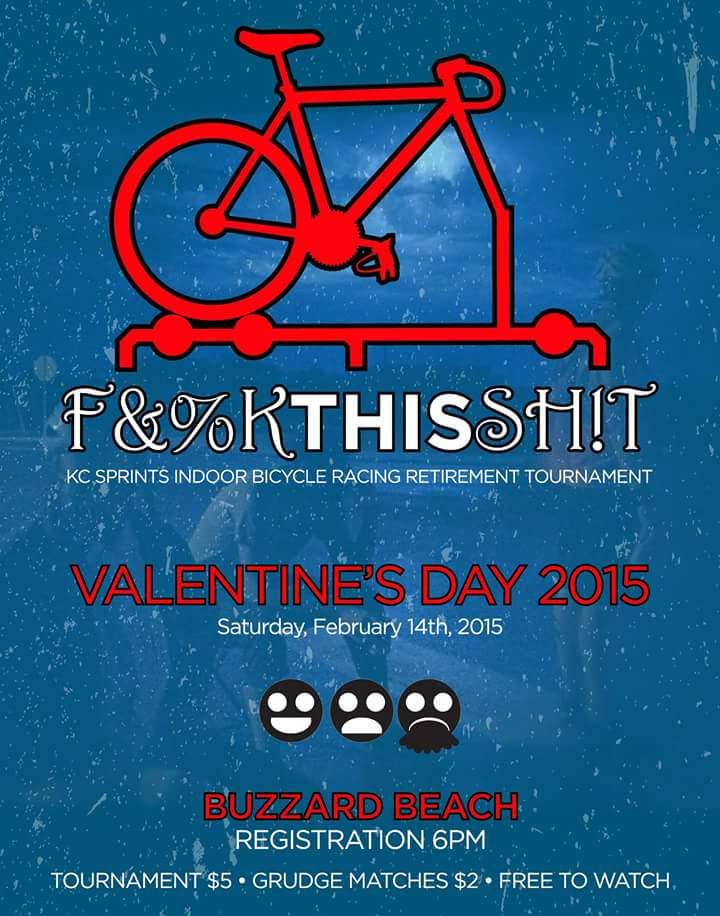 If you could mention the rarely updated blog page and/or Facey Space page as well that would be cool.

Hope you are staying warm in Oakland
Cheers!

Well, there you have it. The end of an era. I wish the KC Goldsprinters luck in their future endeavors, and appreciate the effort they’ve put in over the years in an attempt at bettering their own scene. After all, if they weren’t gonna do it, who was?

Now that we’ve come to the conclusion of today’s effort, my hands will be abruptly leaving the keyboard, and waving in the style of someone who is generally fairly apathetic.

9 Responses to “Put your hands near the air.”