You all know what time of the month it is? That’s right- It’s the end part. After seven months of month end cop-outs, you’re probably used to this by now. If not, I’ll explain it once again. The short version is I’ve decided to take the final post of every month and until they hit me with a cease and desist order, I’ll electronically publish the pre-edited feature I did for the now defunct Paved Magazine.

For the seventh time, I hope you enjoy it. If not, take a hike, and we’ll catch you back here when we return to the regular scheduled rigamarole. 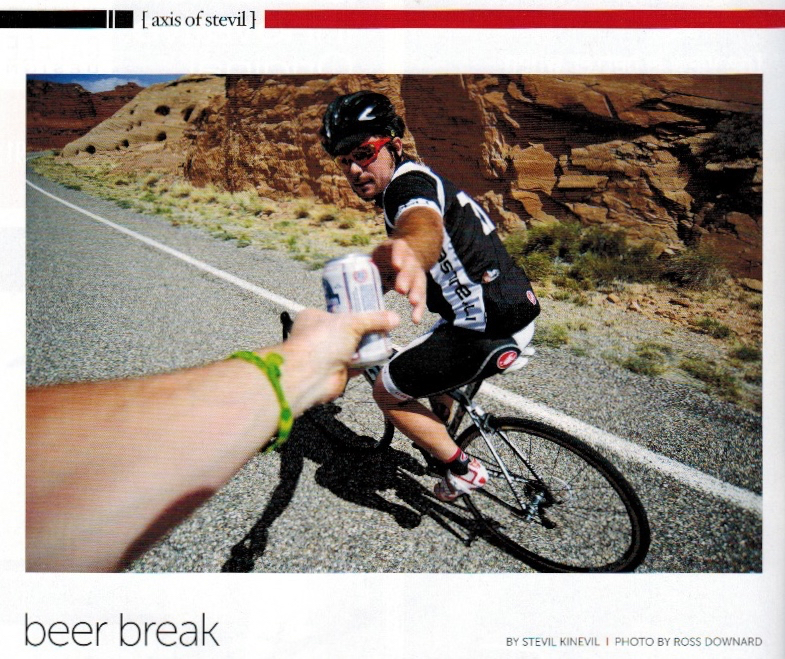 Summer 2012
Many years ago while employed as a mechanic in a bike shop, I was engaging in my various duties of opening the store for a day’s business. I opened the back door to find a co-worker named Scott hanging out and chatting with a homeless fellow named Eugene who lived in a nearby storage space. Sitting on a milk crate, he was enjoying the morning sun with a brown bag clutched in his right hand. “You got a beer in that bag?” Scott asked. “Nah”, Eugene started. “’It’s coffee” he said confidently.

As the conversation concluded, he pulled an empty beer can out of the bag and tossed it in the recycle bin. “Hey, that’s beer!” Scott exclaimed. Without pause, Eugene shot back “e’rybody got they own kind of coffee.” I offer this tale as a preface for the following scenario;

A rider passes by me on the left and we exchange the standard short pleasantries. As he continues on, I notice a very distinct shape in his jersey pocket. Peaking over the top of the pocket’s elastic is the unmistakable profile of two cans of malted beverage. Before he’s out of earshot I give one last exclamation of approval. “Road soda” I say. His head lifts and I see a smile spread across his barely visible face.

Like the knowledge of a secret handshake, the wheelmen and women who know the benefits of a mid-ride beer are few, but our numbers are growing. If you will, follow me on a journey. There you are, enjoying a leisurely ride along the tree enshrouded backroads of your favorite loop. The birds are singing, the sun is shining, and absolutely everything is right with the world. Knowing every pothole, and turn out, your familiarity of this road is complete. Roughly ninety minutes into your journey there’s a fire lane on the right, just past the spot you found the Snap-On torque wrench several years before. Dropping out of the big ring, you begin the ascent, the pea gravel crunching under your tires as you climb. Four minutes up the road, there’s a game trail on the left, which leads to a small clearing that looks out over the valley you’ll eventually descend into.

You lean your bike against a tree and take your place atop a small rock outcropping that for all intent and purposes will be your throne. The haze still hangs I the mid-morning air and several birds soar in the air high above your head. Reaching into your pocket you pull out a snack and a can of bubbly refreshment, which wrapped in a cüzie is still cool to the touch. Cracking the top is the starter’s pistol to fifteen minutes of blissful reflection. You’ll continue on with your ride in due time but for now all that exists is you and the turning world beneath your feet.

Now, for the heart attack-serious athletes in our midst this scenario might be nothing short of blasphemy as there is nary a hint of heart rate monitors or hill repeats. There are other articles for them. This one is for the rest of us.

According to a study conducted by Professor Manuel Garzon of the Granada University in Spain, “the rehydration effect in the study’s participants was ‘slightly better’ than that among those given only water.” He continues “the carbon dioxide in beer helps quench thirst more quickly, while the carbohydrates replace calories lost during physical exertion.”

Now please understand dear reader- it would be irresponsible for me to promote drunken riding, and I will reiterate that this is not at all what I’m saying. I’m simply letting you in on a secret for better health and faster recovery. You know… At least for those of us who choose to imbibe and aren’t afraid to occasionally stop to smell the proverbial roses.

To conclude these observations I could continue to elaborate on various studies pertaining to the topic, however the most succinct way to button up this piece is to tip a hat towards old Eugene and simply say “e’rybody got they own kind of sports drink.”

4 Responses to “End of the month cop-out part seven.”