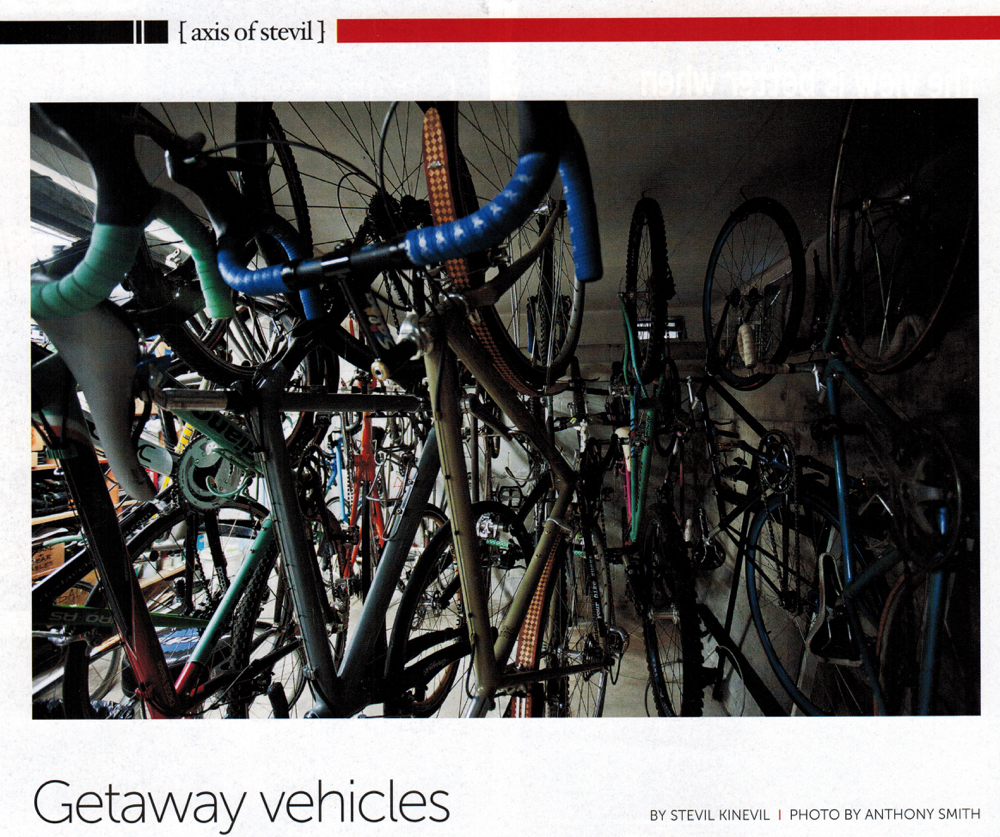 Fall 2012
Paperwork, taxes, deadlines, phone calls that need to be returned, an ever increasing list of emails that need to be read, meetings to attend, and so on. Of course this doesn’t even begin to scratch the surface of various domestic duties one has to commit to on a daily basis. Life is an ongoing, and rhythmic dance consisting of two steps forward and two steps back. With some days the two steps one takes forward getting cut in half. But it’s a process in which we as ants in this proverbial pile must engage. Some days it can get to be a little much, and when such a time arises, like most of us I would assume, I tend to head below deck.

With a head full of fog, and shuffling feet, I bumble around in the darkness of my basement to see that which I’m looking for. The white Deda Elementi bar tape cuts through the shadows like a beacon. Grabbing my beauty from the hook on the wall, I begin envisioning the adventure on which we are about to embark. I roll her past the bank of bikes, oblivious to their jealous eyes. Their time will come soon enough, but today is tailor made for my Ritte and me. I grab my helmet and step into the blinding daylight. With the scent of honeysuckle and cool Bay breezes filling my nostrils, I throw my leg over the saddle and in rapid succession clip in my left foot and then my right. The decent down my driveway is the beginning of what will be the last for a while. My uphill grind starts almost immediately though within forty minutes, I find myself alone, the rows of houses and passing cars all well behind me. The first descent begins gradually and then suddenly drops, sending me on a blazingly fast freefall through banked turns across velodrome-smooth blacktop. Shifting into the big ring, the redwoods turn into a blur of red and brown as I pass and all sounds but my breathing and the wind in my ears are squelched. The mellifluous rhythm of the drive train spinning along sounds like music and as each mile ticks off, so does my concern for any responsibilities left behind in my wake.

I’ve seen every inch of this route a thousand times before but with every trip along its winding way my eyes are opened to something new. Looking deep into the woods I note that I am never alone as I see a dear and her fawn, or a butterfly migration, or on my weaker days, a buzzard circling overhead. As the ride meanders, I reflect back to the first time I ventured though these parts while simultaneously thinking fondly about the next.

My imagination opens up and a mental stage is a set for replays of various bike races, Phil Liggett and Paul Sherwin randomly bantering their soundtrack. I think of a time when I had hair on my legs, and friends who have passed as well as those I have yet to make. I think about my family and my wife and my cat and all of the reasons I love them and I wish that our time together would never end. It’s moments like these which are entirely my own and I selfishly devour them as if it might be my last, because after all, as an animal in our human circus, I never know if it might be.

When lost on a winding road, I don’t concern myself with deadlines or to whom I owe money. I don’t worry about such trivialities, because they are secondary to, and in some part why I find myself here to begin with. All of the headaches of the daily grind will meet me at my door upon my return home because the way I see it, they may be fast, but as long as I’m out here on my bike in between somewhere and nowhere, there is no possible way they can keep up.

2 Responses to “Call it a cop-out part eight.”