The end of the month is here again, (or in today’s case, beginning of the month on account of Friday’s post), and with it, the time in which I post a pre-edited version of the ‘Axis Of Stevil’ article I wrote for the now defunct Paved Magazine. Because I celebrate our differences in tastes and perspectives, I hope you enjoy it, but if you don’t, that’s ok too. 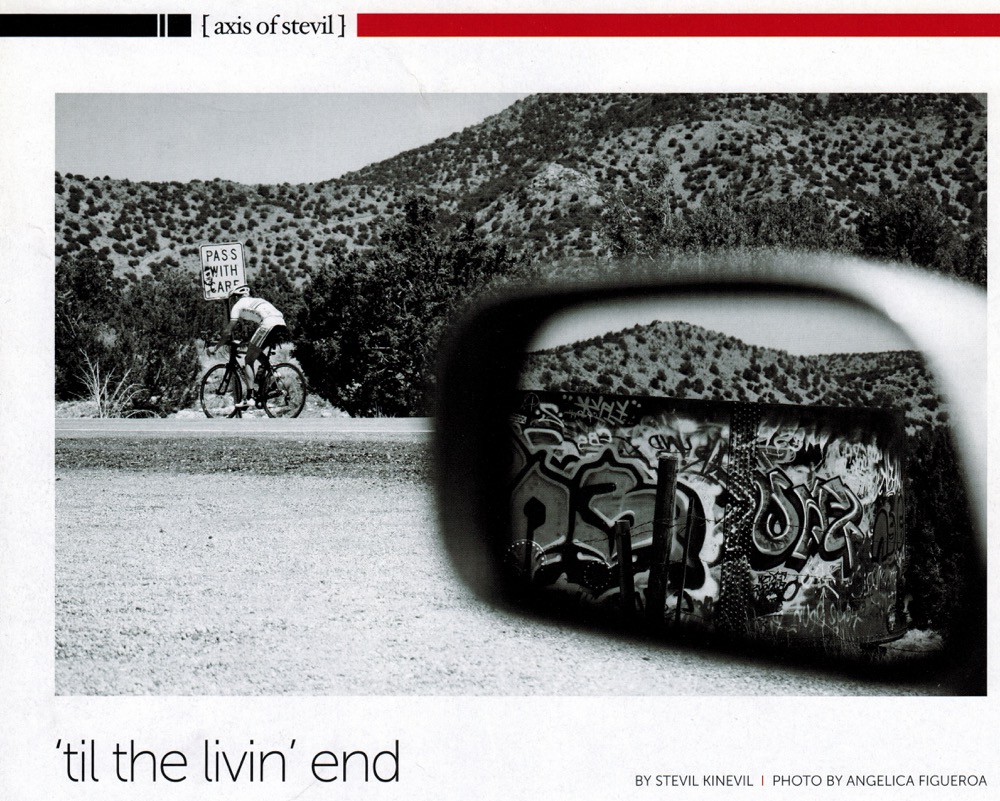 At the conclusion of today’s ‘Axis’ you might exclaim, “what the hell does that have to do with bicycles?” to which I offer a preemptive response; it has to do with bicycles because it’s written by a cyclist, for people to read, who are also cyclists. What’s more is that while cycling is the thing that brought us here together, what is impacting me more at this moment in time is that we are all human beings, so bear with me.

Depending on how far under a rock you’ve been living, we recently have been faced with what someone along the way mistranslated as the ‘Mayan Apocalypse’. However being that the calendar from which the most recent End Times was initially plucked is round, that’s like saying when your car turns over 999,999 miles to 0, it will stop working. Of course if you have a car with a million miles on it, it might be time to trade it in anyway.

But I digress. The Calendar never said that the world was going to end, but rather that we were at the end of one cycle and moving on to a new one. However, as the hysteria surrounding the event grew, I reflected back on the time when I first heard there was an outside chance that the Hale Bopp comet could potentially be on a crash course with earth, which would be a major bummer for a number of reasons, but primarily because almost everyone I know lives there.

With the news report settling in my brain, I sat dumbfounded, while at the same time awash in realizations that we as human animals are just as susceptible to the whims of nature as our quadruped cousins. No matter how we manicure our environment, or how trimmed our lawns, or how clever our vanity plates, or how wide our freeways, our venerability to the whims of the environment just outside our atmosphere is just as great as those of an ant and the underside of our shoe. As these realizations settled in, I made a promise to myself to undertake a bit of fine tuning to my existence. I would take heed to a saying my mom was fond of saying- “everyone is entitled to their own opinion, no matter how ridiculous”. I would always ensure my own backyard was clean (figuratively, as well as literally, I guess) before I worried about anyone else’s, and I would try with all of my might to do at least one thing for myself a day.

Second to any of this, I continue to hope that when faced with our demise, or at the very least, total global reconfiguration (Y2K, both Raptures, and now the ill-fated Apocalypse) mankind would exaggeratedly and collectively wipe off their brows and say “pshweew. We dodged that bullet. Hey, how about we all stop acting like assholes, and we start acting like we’re all on this ship together?”

Until everybody has that realization and finally wraps their minds around the fact that we very literally are dust in the wind, I will be committed to my cause, which is trying to be a good person, living each day like it’s my last, even though it probably isn’t, and keeping my own nose clean before worrying about the noses of others.

It’s with that thought in mind, that I will turn off the computer, and go ride a bike.

3 Responses to “End of the month cop-out part ten”